It took me all of about 30 seconds to realize I wanted to pick AG Drive ($2.99) as Game of the Week this week. Oh I’ve played a lot more than that since then, just to be sure, you know? But I can’t recall a game that has left a better first impression on me than this one, and in subsequent playing it’s totally backed up those initial feelings. As I put it so eloquently to Eli earlier today, “The ‘holy sh*t!’ factor is extremely high with this one."

So what the heck is AG Drive? It’s a futuristic racer in a similar vein of the beloved Wipeout or F-Zero series of racers. Hovering vehicles, crazy tracks, insane speed… it’s all here. Well, all but the weapons, that is, but that’s ok. The racing in AG Drive is solid enough to stand on its own without having to blast apart your opponents, although that would be awesomely fun. In terms of “feel" I’d definitely say AG Drive is more in-line with the F-Zero series than Wipeout, but in the end they all fall under the umbrella of “futuristic racer." 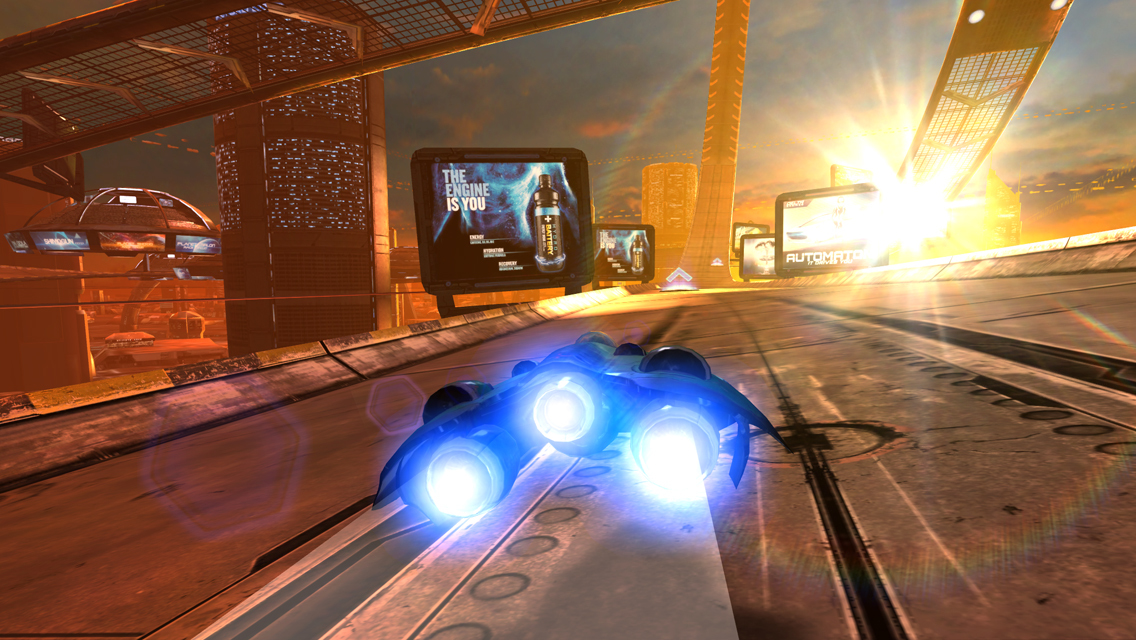 The game uses Apple’s Metal framework and it looks absolutely gorgeous. Seriously, the game is ultra-crisp and runs at an incredibly smooth clip, giving it a sense of speed that’s rarely felt in racing games, let alone mobile racing games. The way the tracks shoot upwards and into the sky, spiraling around and taking a steep dive back down to Earth makes playing feel like you’re riding a real-life roller coaster. It’s exhilarating.

AG Drive also has a pretty interesting backstory, especially if you’re not particularly fond of free to play games. This actually soft-launched all the way back in June of last year as a completely free to play game. Energy timers, consumables, the whole enchilada. You can read the impressions from the gamers in our forums from back then, and pretty much all the comments were about how beautiful AG Drive was and how much of a shame it was they’d never play it since the free to play systems were implemented in such a gross manner.

Well, somebody at Zorg, developer of AG Drive, must have took comments like that to heart, as here we are about 8 months later and AG Drive has officially launched worldwide as a $3.99 game with absolutely no in-app purchases. I’ve been saying it for a while now, but it feels like we’re turning a corner where not EVERY game has to be free to play, and smaller pay-once games can still be successful serving a smaller niche of players while other games can happily go full-blown free to play and chase after the whales.

So AG Drive is a beautiful and premium futuristic racer. But is it fun? Hell yes it’s fun! One thing I want to point out specifically is how great the controls are. The default control setup is tilt, but there’s a virtual stick option as well. Normally I despise tilt in racers and will always switch to the virtual controls option when given the chance. Not so with AG Drive. The tilt controls are impeccable, and I actually vastly prefer them over the virtual controls. It’s really hard to explain, they’re just so finely tuned and they just feel so natural. You really need to experience it firsthand.

In fact, “experience it firsthand" pretty much says it all about AG Drive. The trailer sure looks pretty, and I can talk about how awesome it is all day long, but it’s one of those things that really hits home once you experience it for yourself. So if you’ve got four bucks just lying around, I can’t think of any better way to spend it than on AG Drive if you’re a fan of racing games.