King of Thieves (Free) is a game that shows the problems with review scores, because it exists at two diametrically-opposed extremes. On one hand, it’s a remarkably cool concept: it takes auto-running trial platformers and puts it into a Clash of Clans (Free) style raiding system. You can design a dungeon, crafting gems to become more powerful, while trying to keep other players from getting your gems by way of making a dungeon too powerful for them to successfully raid. All the while, you’re raiding others and playing through the singleplayer campaign, getting more money, upgrading your stats and traps to be better at raiding and to make raids tougher. But it’s a game with a particularly annoying energy system that raises questions about its fairness. It’s a game that doesn’t go down smooth, particularly if you’re not a free-to-play fan. 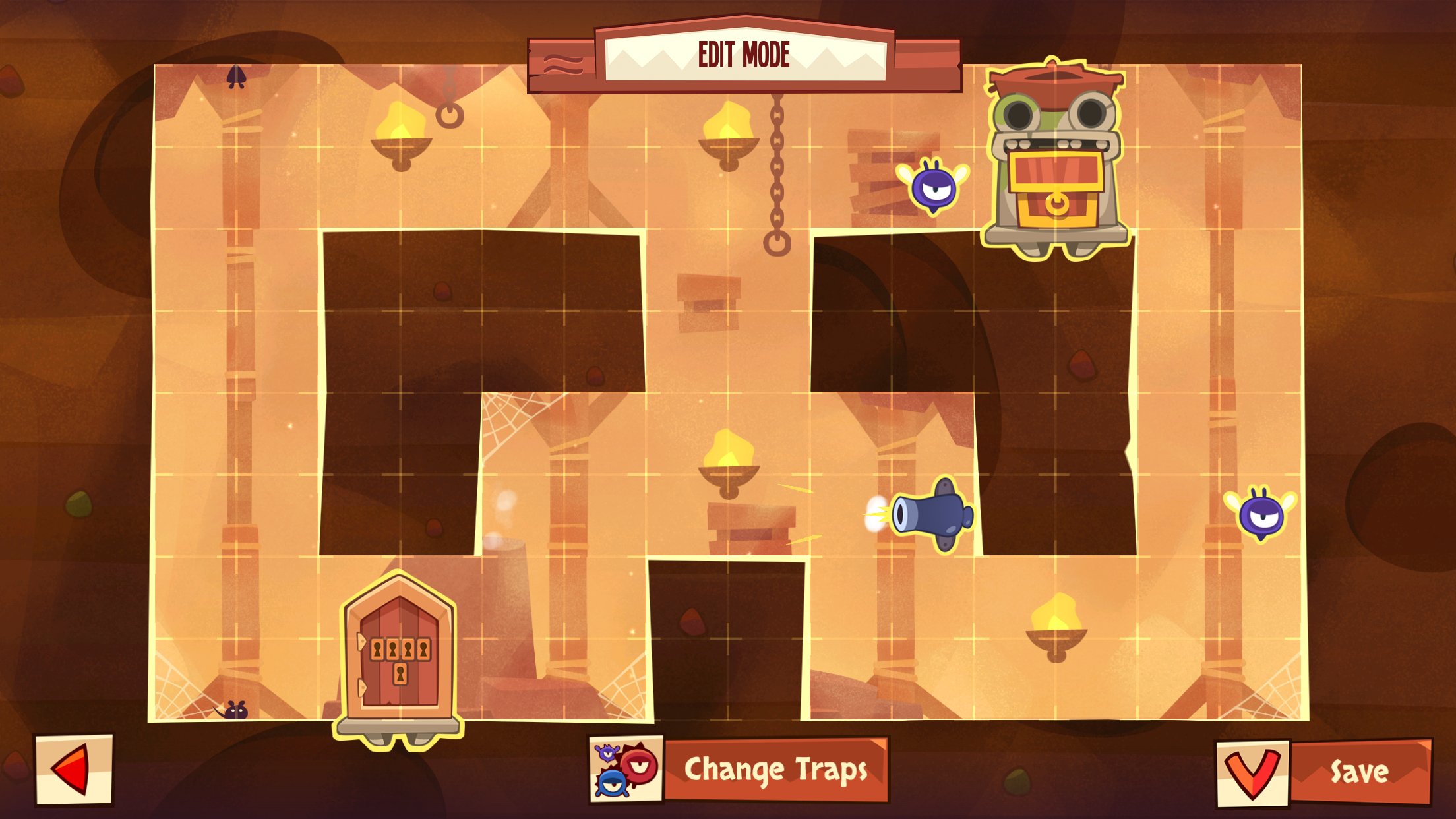 Essentially, the game is about making it to the goal in each level, as you control a thief who can only really run forward. Said thief will stop at walls and jump up them, with the ability to slide down and jump off, which is their way of turning around. Each level takes place on one screen, so you always know where the enemies and traps are, and can always keep an eye on them as you make it to the end of each level. On its own, while the levels are small and relatively simple, it’s a game that’s very touch-friendly with consistent physics. As well, it’s made by ZeptoLab, and they know production values. For people who tire of free-to-play games that feel like they aren’t based on skill, King of Thieves will impress.

King of Thieves has a lot going for it. But problem number one with the game is its lockpicks mechanic. Serving as the primary energy system for the game, it winds up being rather ridiculous Essentially, to play a level in either multiplayer or in the singleplayer campaign that unlocks better dungeons down the road, you have to use a lockpick in order to break the correct lock from among a series of lock in order to play a level. The problem is that the lock which unlocks the level is entirely random with no hints as to which lock is the one that you break into. And the locks quickly become ridiculous: you may have a total of 13 picks to unlock a 9-lock level before you get to level 30 in the singleplayer. It’s a system that swiftly descends into self-parody. The multiplayer is a bit more subjective as to how the player has chosen to upgrade their defenses, but it still feels silly. 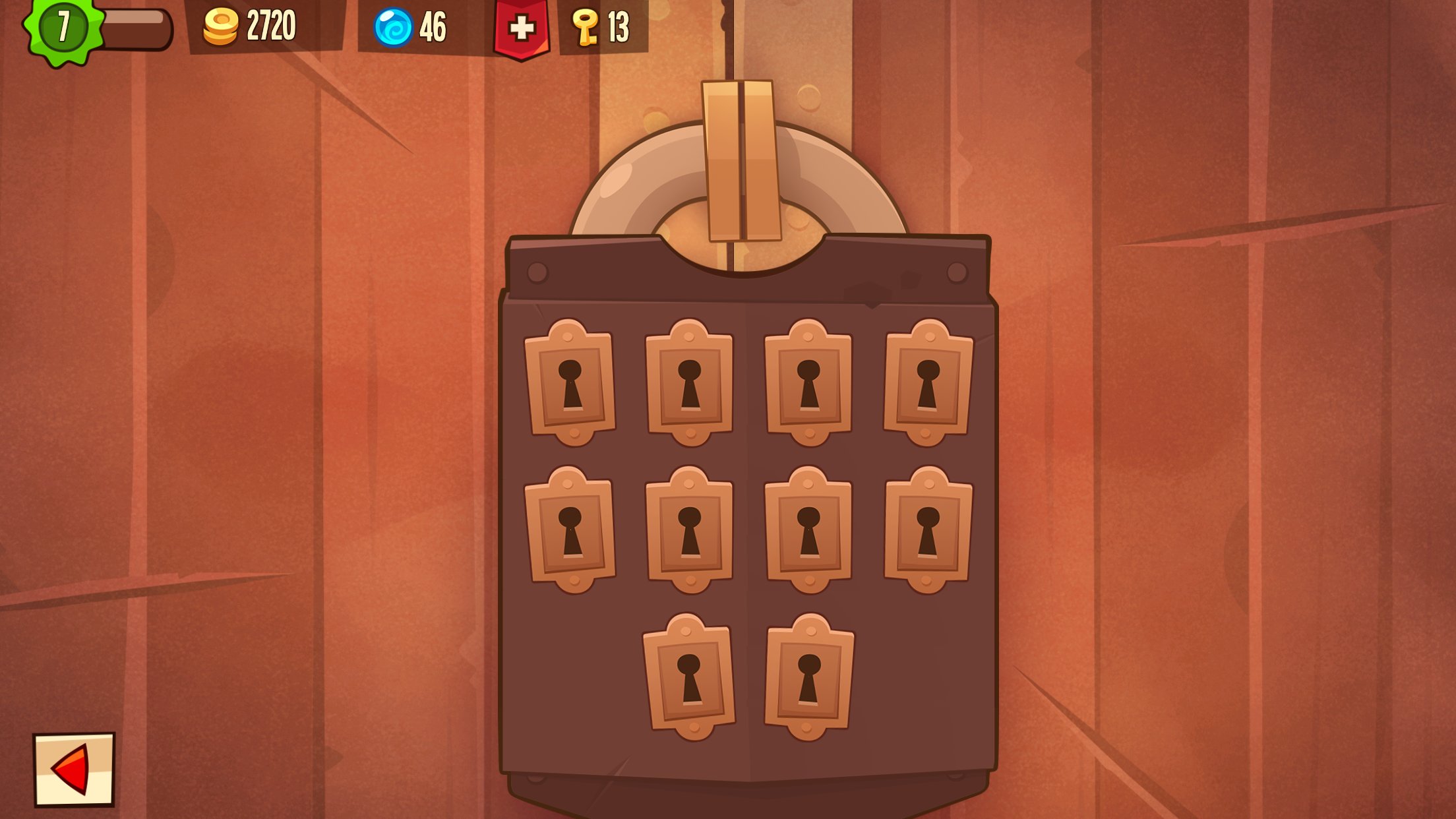 While the copious consumption of said picks is bad enough, it wouldn’t be so bad if the lockpick system didn’t feel so untrustworthy. It felt too often like it would take all of my lockpicks to open up a level, and sometimes one would open up on the first try if I was running low, to coax me to play more. It’s a random system that never feels like it’s actually random, like too often the game would make me open every single lock before I could play. The game lets you refill your lockpicks for a small amount of premium currency, or watch a video to get 2 more, and it’s easy to imagine the system being weighted in such a way that it gets you to watch more ads. I don’t mind, and in fact appreciate the the videos are there, and any picked locks will remain picked if you run out of picks. Plus, the picks regenerate at about 15 per hour by default, which isn’t awful. But it’s not great, because it’s a system that actively stands against the player and infuriates them with regularity.

It’s a very poor implementation of an energy system, too. I would rather get more opportunities to play in one burst with longer waits. But this is a challenging trial platformer! This is the kind of game built to be played again and again, making me stop playing is kind of against the point! While I understand free-to-play monetization has to run its course, this feels like a bad example of free-to-play, where the gameplay is something that could appeal to even the haters. They just run into an obtrusive system where they can maybe play one level per hour. It is possible to increase both the lockpick production and amount you have with just soft currency, however. 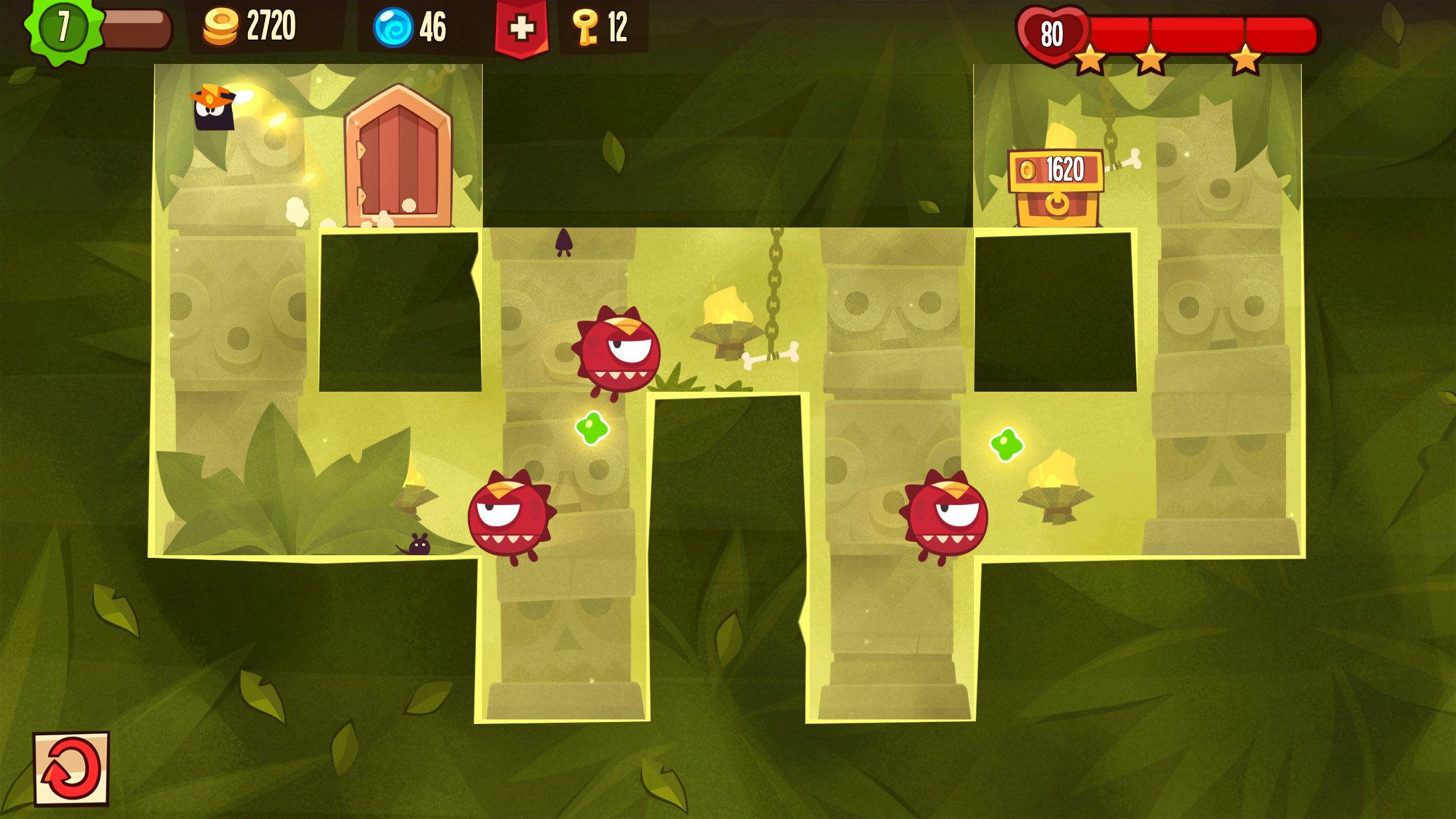 It’s a shame, because this game does a satisfactory job at balancing monetization and pay-to-win fears. You can buy better hazards for your dungeon, but unless you yourself can beat the layout that you yourself made, you’re not going to be able to use it. It also ensures that you can’t quite make an impossible dungeon. But still, you can buy a better set of traps with hard currency or with a greater amount of soft currency than the default traps. So, it’s a balance between the evils of monetization and the joys of player-created content. Granted, the game is somewhat limited because there’s only the limited number of traps available per level, so you will learn how the different hazards work – but there’s still room for cleverness in the design. Everyone is working from the same blueprints, though. 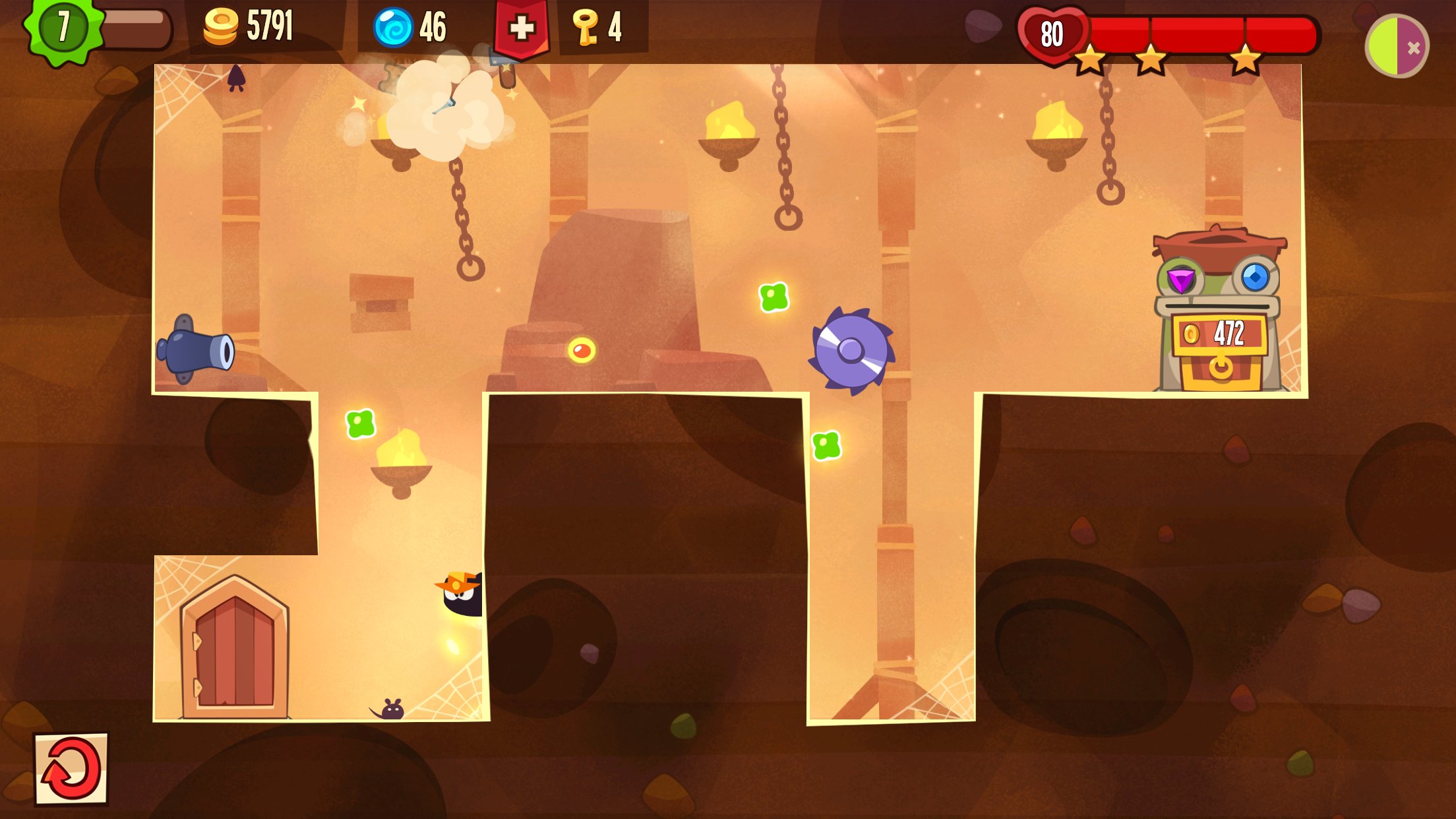 The raiding system is a really cool idea because of the customization that each player has, and the idea that you can genuinely steal things from other players by playing well. However, the lottery system to decide if you get their gem is kind of shady because, again, I don’t trust the lockpicks to be all that fair, and I don’t trust a random spinner where I get more attempts for more hard currency, at an ever-increasing amount. But it’s kind of cool and genuine to not have to play with some sort of AI version of an opponent: you’re taking on an actual opponent. Of course, it’s also very annoying to try and get revenge on an opponent and find that they’re currently online when you try to raid them, or find out that someone else is raiding them, which is silly when I should have priority because they literally just attacked me. Joe Schmo can wait. Or finding out someone has a shield when I try to avenge myself. Some warning would be nice. Also, giving up a shield in order to attack someone who can’t be attacked is infuriating.

If I seem conflicted about King of Thieves, it’s because I really am. We have a game that emphasizes the best and worst of free-to-play. The game has a lot of cool aspects to it, but so much of it also emphasizes the worst things that monetization can bring to the table. If you have a strong distaste for free-to-play, stay far away from King of Thieves. If not, then I really like the concept enough to check it out, even if it’s nowhere near perfect yet.