Much as I love it, I have to admit that video pinball is a very, very strange thing. They’re sort of like those homemade recipes for Ecto Cooler that you can find around the internet: a shadow of the real thing, an attempt to replicate an incredibly tactile but now nearly-extinct experience. For most people, there haven’t been any pinball tables around their locale since Clinton was in office. I wouldn’t be shocked if many of our readers have never laid eyes on one in their lifetime. But for those of us who love them, if we can’t wrap our fingers around a real machine and build the callouses on the palms of our hands by slamming them into the side of a wooden box to nudge a steel ball a half-centimeter off its course, we’ll take what we can get. We’ll take the video pinball. Because even though there’s an unquestionable component of the game intrinsically tied to physical sensations, the games themselves have strong merit on their gameplay. The lights and sounds pulled us in, but the gameplay is what kept us coming back.

Video pinball is probably enjoying the most successful era of its existence. Between the scarcity of the real thing, the improved physics and lighting that come with more advanced technology, and some serious commitment from pinball-loving developers, pinball fans have a nearly absurd amount of excellent choices, particularly on mobile. There’s the ubiquitous Zen Pinball (Free) and Pinball Arcade ($0.99), the former dedicated to doing things reality couldn’t and the latter taking almost the opposite approach with their stringent recreation some of the most famous and loved tables from history. There’s Zaccaria Pinball (Free), trying to fill the one gap that Pinball Arcade left open by recreating tables from the more obscure European market. Then there are apps like Pure Pinball ($2.99), which seek to create new tables that nevertheless adhere to the rules a real table would have to. 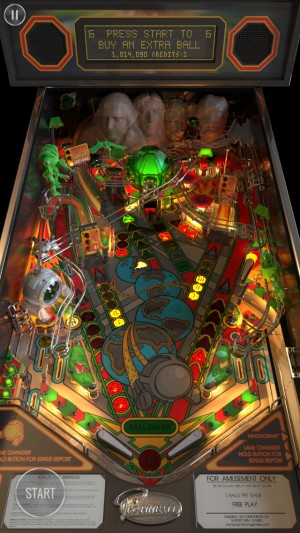 There’s one more group, however, and it may be the strangest of them all. As I said, video pinball is having a very successful period right now, but there’s more to video pinball than the modern age. Back in the 1990s, when real pinball tables were just starting to dry up, there was a curious little video pinball boom on PCs. We’ve had Epic Pinball, now known as Retro Pinball (Free), on iOS for a few years now. It’s a fairly poor recreation of a popular shareware pinball game from the early 90s. It’s now being joined by one of its main competitors from a few years later, Pro Pinball (Free), a game that is similarly aimed at people who have nostalgia for tables that never actually existed. The Pro Pinball series actually got around a fair bit back in the day, with various port to Mac, the SEGA Saturn, PlayStation 1, and SEGA Dreamcast, making it probably the most well-known video pinball series prior to Zen‘s arrival.

Unlike many video pinball games from that period, the Pro Pinball series still holds up fairly well today. There are lots of reasons contributing to that, but I think the key point is that the engine has stunningly good physics. The games were pitched to being as close to real pinball as you could get, and although the competition has gotten tougher in the intervening years, Pro Pinball can still hang with the best. Each of the four tables in the series is quite well-designed, with excellent themes to build some fun gameplay around. They’re approachable at first glance to pull in newcomers, but with plenty of complex rules for hardcore pinball fans to dig into.

The initial iOS release of Pro Pinball has just one table on offer, Timeshock!, playable for free up to 30 million points. If you choose to buy the table, you have two options. The standard version of the table allows you unlimited play for $2.99. The deluxe version goes for $6.99 and gives you not only the table, but access to both a rather large operator’s menu where you can fiddle with an absurd amount of settings and a special “Glass-Off" mode that removes the virtual glass from the table and lets you push the balls around with your finger. The operator’s menu is the big selling point for this version, as it was a very popular feature in the original Pro Pinball games. Unfortunately, there’s no IAP at present to upgrade from the standard version to the deluxe, so if you don’t go for the deluxe up front and want it later, you’ll have to pay the full price.

Timeshock! wasn’t the first release in the series, but it’s as good a place as any to start. Originally released in 1997 as the second installment of the Pro Pinball series, it offers up a fun time-traveling adventure that spans four main eras: the present, the future, the prehistoric past, and ancient Rome. Since the table is designed to adhere strictly to reality, don’t expect any sort of crazy table shifts as you go through time. Different pieces are lit, the music changes, and goals vary from era to era, but the table layout remains the same. The table also features a video mode, like many real pinball games of the era, where you play a little mini-game on the dot matrix display. Each fresh launch has a ball saver active for a short while, and you’re given a magno-save at the start of each game that you can use to whip the ball around if it starts to go down the right drain. These concessions to beginning players belie the difficulty of finishing the table’s actual main goal, which makes for a tense challenge for even skilled players. It’s a lot of fun and definitely worth its price. 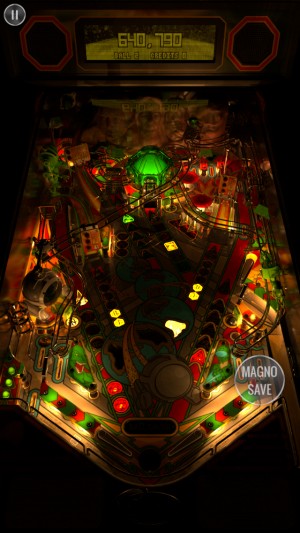 As for the engine running the whole works, in some ways it’s utterly amazing and in others, it needs more work. The physics are better than ever, and are in fact probably the most realistic of any pinball game I’ve played on iOS. The game also features absolutely gorgeous lighting. Even on the standard version, you can play with the ambient lighting, going all the way from a well-lit room to a nearly dark one. Go ahead and crank it down to the darkest setting for one play just to see how dazzling the lighting is in Pro Pinball, then turn it back up a few notches so you can actually play again. The controls are nice and responsive, with convenient places to rest your thumbs for each flipper and a simple swipe gesture for nudging that avoids being too sensitive. It also seems to be relatively bug-free, which is a luxury not all pinball simulations on iOS offer.

Unfortunately, it also bears the hallmarks of an initial release. You only have one camera angle available to you, and while it’s a useful one, I’d love to have something with a slightly lowered view of the table. The game is also apparently only playable in portrait mode. That’s my preferred way of playing pinball on iOS, but I know lots of people enjoy playing in landscape, so I certainly hope that’s coming. The user interface could use some work, and the loading time from the table selection screen to the actual table is extremely long. The first time I played, I was actually worried the game had frozen on the load screen. Finally, there is of course only one table available at the moment. That will be alleviated in time, but for the moment, Pro Pinball is lacking the variety all of its competitors offer. It should be noted that none of these faults affect the actual playing of Timeshock! itself, so if that’s all you’re concerned with, you’re going to be very happy with Pro Pinball.

All of these problems will probably be fixed eventually, but I’m a bit concerned about the potential timetable. This game was the result of a Kickstarter campaign, and with the iOS version released, the developers are likely moving on to the other versions to fulfill their obligations. I’m not sure how big their team is, but I worry that we’re going to have to deal with these issues at least until the other ports are finished. There’s nothing game-breaking here, but Pro Pinball does come up short in certain options that iOS gamers tend to expect as standard. Here’s hoping I’m wrong on that count. I also can’t say for certain when the other Pro Pinball tables will arrive or how any eventual original tables will fare. I hope the people behind it still have the magic, but the last new pinball game I played that was designed by them, the brilliant Metroid Prime Pinball, was quite a while ago, so we’ll have to see.

The hard part is done, though. The engine is here, the physics are terrific, and it plays divinely. If you’ve got fond memories of Pro Pinball, get on this right away. If you’ve never played it before and enjoy video pinball games that aim to replicate reality, you’ll likely find this to be the best original video pinball game you’ve ever played. Finally, if you’re willing to drop the money on the deluxe version, you’ll find a wealth of options in the operator’s menu beyond any sort of sane imagination, and there’s nothing wrong with that. It’s just in the more pedestrian options that Pro Pinball doesn’t quite measure up, and I certainly hope to see those issues buttoned up in the future.