If you think about it, WayForward Technologies is one of the original indie stars of handheld gaming. They first gained notice when some poor soul who was assigned to reviewing licensed claptrap on the Game Boy was playing some games based on Sabrina: The Animated Series and realized they were decidedly less bad than usual. A couple of years after that, they released their first game based on an original property, Shantae, which ended up being one of those games that sold far fewer copies on release than its eventual demand would call for. The game’s charming presentation and ambition to actually make a decent Game Boy Color game won it plenty of fans. Combined with its relative rarity, its high quality gave it a near-legendary status and elevated its developer in the eyes of core handheld gamers.

Sadly, accolades don’t pay the bills, so WayForward was back to licensed properties for the next several years, along with a couple of original titles that didn’t really stick. I feel like the turning point for the company was Contra 4 on the Nintendo DS. Though it too didn’t sell as well as its publisher had hoped, it was a very high profile project, and WayForward knocked their part of things out of the park. While I don’t think it’s the best Contra game ever made, I think it’s my favorite in a lot of ways. It has great graphics, amazing music, extremely challenging gameplay, and it’s packed with tons of unlockables. WayForward was still largely confined to licensed work after Contra 4, but at least some of the licensed work involved old game franchises instead of just whatever bucket of tripe Nickelodeon or WB Kids were throwing at the wall that season. 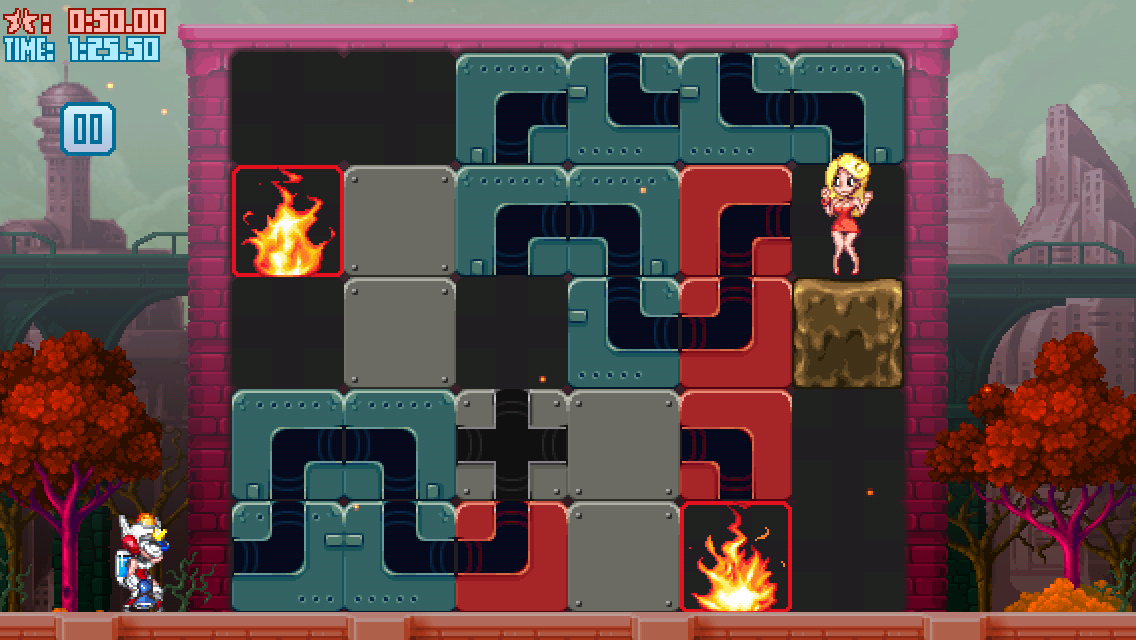 Not long after Contra 4‘s release, the Nintendo DSi arrived with its DSiWare shop, which finally provided a means for WayForward to get some of their original ideas out there in a low-risk, self-published way. They kicked things off with Mighty Flip Champs!, a fun puzzle-platformer that began a loose series under the Mighty moniker. Apart from that first game, probably the most well-known of the series is Mighty Switch Force!, an early Nintendo 3DS eShop release. Like Flip Champs, it’s a puzzle-platformer with a special gimmick mechanic. You play as Patty Wagon, a futuristic police officer charged with rounding up escaped criminal girls. You would come across obstacles of two different colors, one in the foreground and the other in the background. With the press of a button, the two colors switch layers, and lo, a puzzle platformer is born. It was successful enough to get a WiiU port and a sequel, Mighty Switch Force 2!, which had Patty switching careers to firefighting. It added a hose that could interact with some new types of blocks and obstacles, but the game retained the familiar block-switching element of the original.

That brings us to Mighty Switch Force! Hose It Down! (Free), WayForward’s second self-published release on the App Store, following the more or less straight DSiWare port, Shantae: Risky’s Revenge ($2.99). It is not, as one might expect, a port of Mighty Switch Force 2!. It’s actually a pure puzzle spin-off that reuses assets from that game. Given the issues many had with virtual controls in their previous iOS games, it’s not the worst idea. The Mighty Switch Force! games can be difficult enough as it is with precise controls, so they probably wouldn’t work out well for most people using pure touch. So, sure, let’s do a puzzle game. I’m not even opposed to the general idea of the game, which is a variation on the classic Pipe Mania puzzle games where you fit various pipe pieces together to try to make a continuous path. Each stage features a building on fire, and you need to move or rotate the pieces inside to redirect the flow of your hose and put out the flames. It fits the theme well enough, and allows WayForward to bring in things from Mighty Switch Force 2! like mud blocks and people that you need to rescue. Original, no, but certainly fun enough. 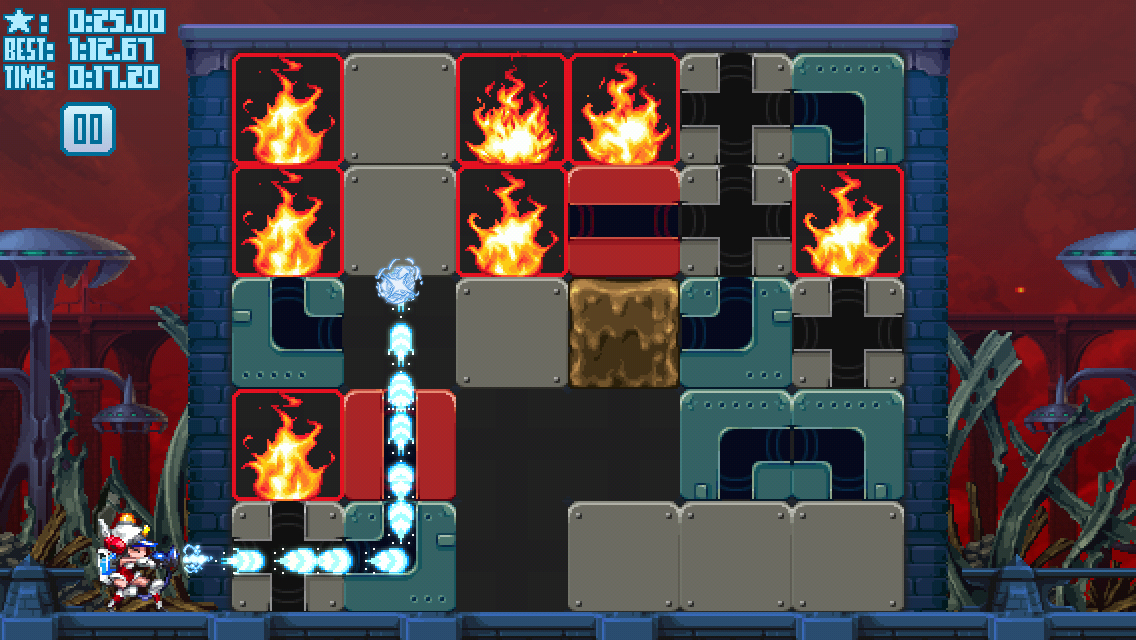 The problem here is that the value proposition is all out of whack. WayForward is still getting the hang of the iOS platform, and it shows here. The base purchase includes 25 puzzles, half of which are extremely simple so as to introduce the mechanics, and the other half of which still won’t take you longer than a minute or two each at most to figure out. You’ll likely run through the entire game in less time than it takes to cook a TV Dinner in your oven. If a game’s going to be short, I want it to show me something interesting or new. If a game’s going to be meat and potatoes, I’d like it to be a healthy portion of meat and potatoes. Unfortunately, Mighty Switch Force! Hose It Down! is a plate with a tiny little boiled potato and a couple of thin slices of pre-cooked ham. In what is possibly the most competitive genre on the App Store, it’s nowhere near enough.

The game helpfully offers an additional level pack for $0.99 that doubles the stage count. These levels are more akin the back half of the set the game comes with, providing a decent challenge and more than doubling the length. There’s nothing particularly interesting about them, as they don’t pull any new mechanics in or anything, but if you had a good time with the default set and are willing to throw another dollar down for more, you won’t be unhappy. I can’t help but think there might have been a better arrangement of this content and its pricing that would have me feeling slightly more positive about the whole thing. As is, it feels like I get too little for my initial buy-in, and that doesn’t make me want to pay for more, however cheap it may be. 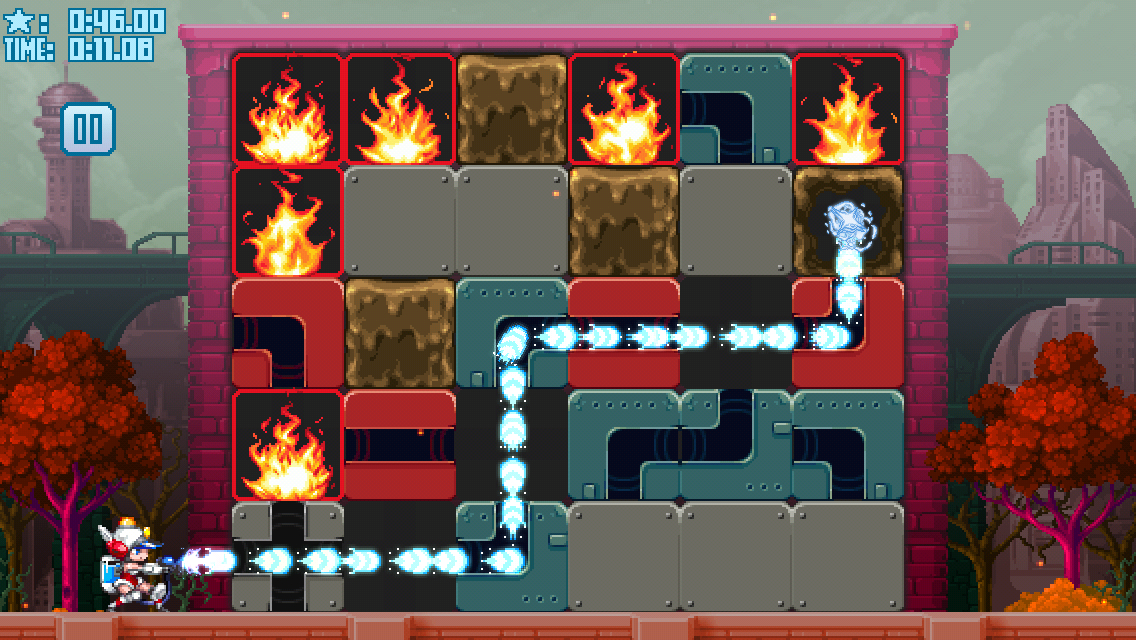 The game at the very least benefits from WayForward’s usual high quality in presentation. The sprites are detailed and lavishly animated, the backgrounds have a lot of variety considering the small number of stages, and the music is catchy. Of course, all of this is courtesy of the 3DS game, but it’s still appreciated. There’s also leaderboard support through Game Center where you can compete for the fastest clear times. If you can get into that side of the game, it might give it a bit more longevity, but once you’ve learned the solutions to each puzzle, it’s really just a matter of how quickly and precisely you can slide the pieces around.

Surprisingly, considering how many games they make based on questionable licenses, WayForward very rarely puts out a game that could be considered flat-out bad. Mighty Switch Force! Hose It Down! isn’t a bad game, but between its brevity and lack of interesting ideas, it’s not a very good one, either. If you do go for it, do yourself a favor and spend that extra dollar right away. If you wait, you probably won’t want to, and the better half of the game is in those IAP levels. Better still, just save your money on the whole thing and buy one of the many brilliant puzzle games it could get you instead.