There are a lot of issues with Heroes Of Might & Magic 3 HD ($9.99), the spiffy remaster of the 1999 classic PC strategy game. The control layout has done little more than map things directly from keyboard and mouse to touch, with not much in the way of explanation of the intricacies, even in the tutorial. There’s significant content missing in the form of the two expansions, which will not be coming to this version due to the source code being lost. The map editor found in the original game and the PC version of this HD remaster is not included in the iPad version. The updates are few in number, with just a bit of spit-polish done on the sprites and text to make them look a little less pixelated. These are all good reasons to pass on Heroes Of Might & Magic 3 HD, especially if you have a computer, where you can buy and play the complete version of the game with all expansions included for the same price.

There’s another angle worth thinking about here, however. Not everyone likes to game on their PCs. Probably a large percentage of today’s gamers haven’t ever played Heroes 3, and therefore won’t miss the expansion content. I also imagine that most mobile strategy game fans have learned to wrangle more awkward and esoteric controls than these. The bottom line, I suppose, is that even with all of the elements that could be better here, Heroes Of Might & Magic 3 HD is still an awfully great game, standing proudly among its peers on the App Store. If you have a better or more comfortable way of playing the game, I suggest you do so, but if you’re like me and would rather curl up with your iPad than your computer, there’s plenty of fun to be had here. 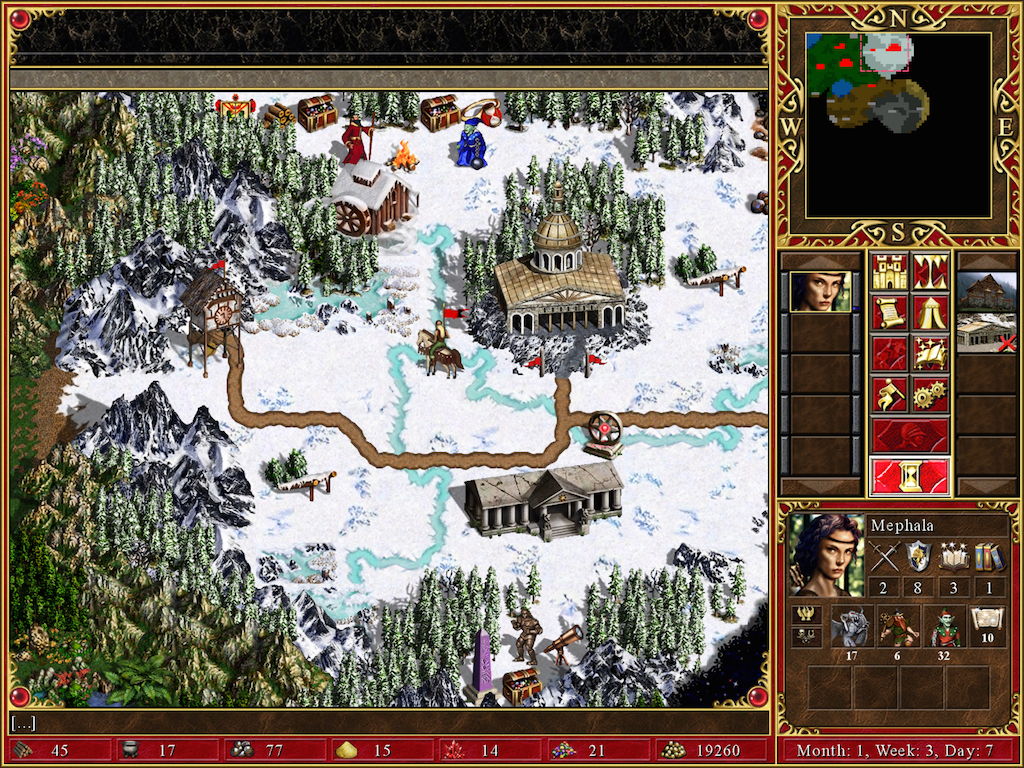 Heroes Of Might & Magic 3 is the third installment of the strategy-focused spin-off of the classic Might & Magic CRPG series. This isn’t the first Might & Magic game we’ve received on iOS, technically speaking, as the platform has seen a release of Might & Magic: Clash Of Heroes ($4.99), but this is the first of the classic pre-Ubisoft series we’ve gotten, in spite of all of them being rather well-suited for mobile play, in my opinion. Anyway, this spin-off series started in 1995 and is nearly as successful and prolific as the main series. There are currently six installments in the Heroes series with a seventh on the way this year. If you’re wondering why we’re getting the third game over all of the others, it’s because Heroes 3 is widely considered the best of the whole series to date. As we often see in long-running franchises, the first game was a bit rough and simple, the second pushed out into interesting directions, and the third game refined those interesting ideas into a near-perfect package.

For those unfamiliar with the series, you control one or more heroes in either individual scenarios or campaigns made up of several linked scenarios. Each scenario will have particular objectives you need to achieve in order to declare victory. Every map has numerous points of interest you can investigate using your heroes, with rewards like treasure, experience, resources, and stat boosts waiting to be found. You can only travel so far with each hero per day, after which your opponents are free to take their turns. Should you encounter an enemy force on the map, the game switches to a battle screen made up of hexagons, with your units lined up on one side and the enemies on the other. Your hero can use any special abilities or magic at their disposal from the sidelines, while other units can take their turns moving and attacking based on their speed. Whoever wipes out all of the other’s units first is the winner. If that’s you, you’ll earn some gold and experience for your hero. If it’s not you, well, you’ll probably lose that hero and will need to hire another one from town. 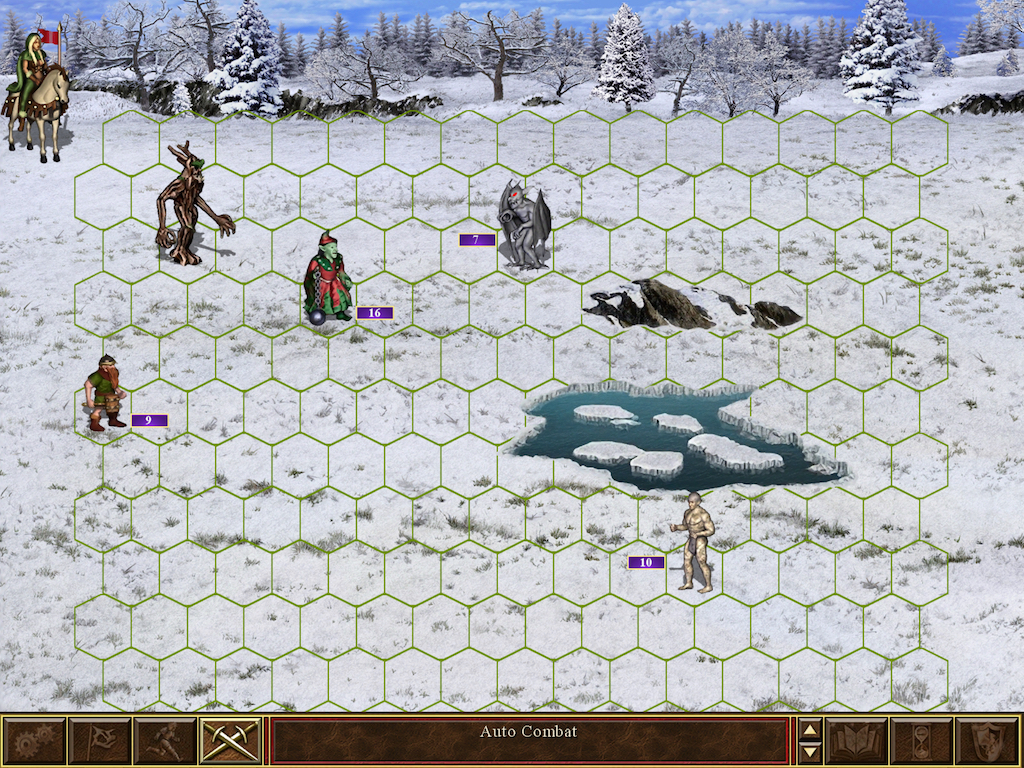 Towns are also where you can hire on new troops, provided they’re available and you have the money on hand to do so. There are several different types of towns, and they all offer a different assortment of units. Some of those units aren’t open to you until you build the right buildings. There are other important structures to build, and you might want to upgrade existing buildings to increase their effectiveness. You don’t want to waste all of your money on building things, however, because you’ll need to keep your armies well-stocked and have enough left over to leave as defense in strategic locations. This tricky resource balancing act is where Heroes 3 still shines to this day. You never quite have enough to cover everything you’ll want to, so you have to make some hard decisions and hope that you read your enemy’s plans correctly. You can’t simply focus on gathering resources, either, since you’ll likely want to make sure your heroes are getting enough experience points to level up along the way. Leveling up lets you choose from one of two perks, and once you start stacking a few, they can become game-breakers.

The various RPG elements make Heroes 3 a considerably more complex game than many others in its genre, but while there are a lot of things to keep track of and learn, the game on the whole is fairly accessible. That’s largely owing to all of these different pieces being drawn from familiar sources. So while you need to get used to the combination, chances are good any particular sub-system is going to behave in expected ways. The early campaign maps go gently on you while you’re still figuring things out, but the game actually gets pretty mean over the long haul. There are several difficulty settings so you can set the degree of frustration the computer opponents will give you, but they’re always going to make very few mistakes, so you have to be very careful you aren’t making more. The way the game flows, one bad stroke of luck can set you back considerably. You can save at any time, to multiple files, and I suggest you make good use of that if you want to see the campaigns through to the end. 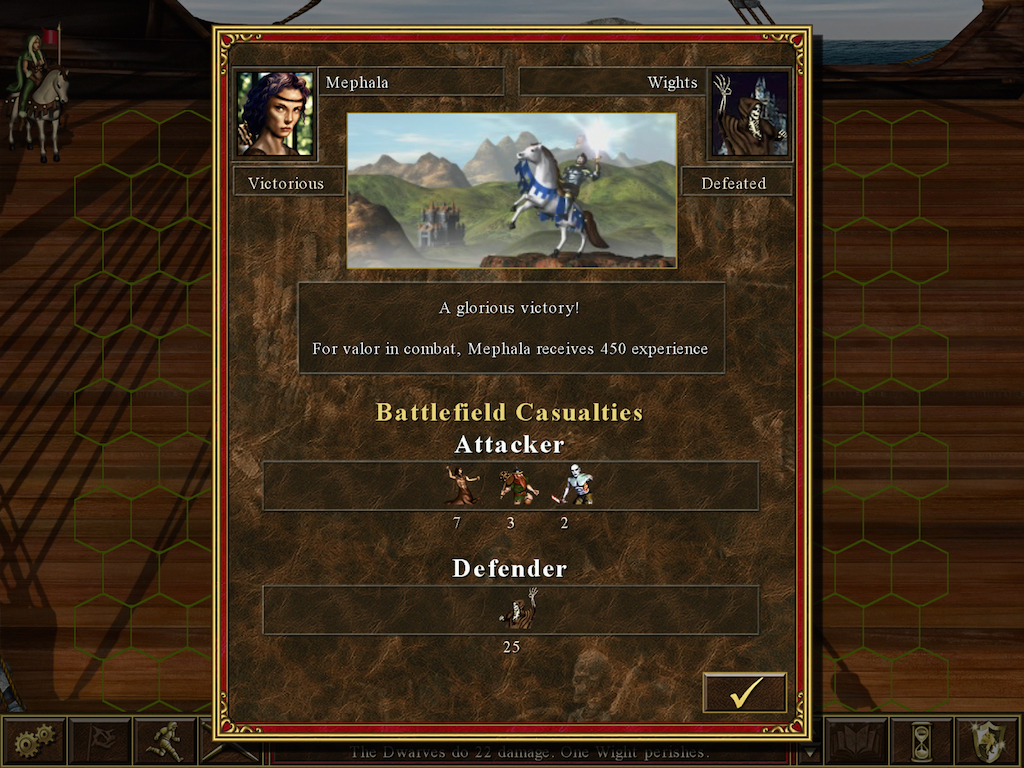 It’s worth doing so, as the story in Heroes 3 is a bit more interesting than the average strategy game. You get to see the conflict from multiple angles as you play through the six main campaigns, and it’s all capped off with a special seventh campaign that you can only play once you’ve finished the rest. Besides the campaigns, there are also 50 skirmish maps that let you play one-off mini-stories. There’s also a multiplayer mode that is great fun, but it’s sadly limited to local hotseat play in this version of the game. I know net play hasn’t proven popular enough to justify it in most iOS strategy games so far, but that’s never going to change if it keeps getting left out of big titles. Part of the reason why Heroes 3 gained such popularity to begin with was because of multiplayer. The single player content in this game is substantial and worth the price of admission, but there’s so much more enjoyment to be had here if you’re in the lucky position of being able to take advantage of it.

As I mentioned at the beginning of this review, the controls are not the greatest. It’s not terribly different from playing the original game with your finger substituting for a mouse. If you’ve played the game before, that’s not a bad thing, as everything works essentially the same as before. If you’re coming in with only knowledge of other iOS strategy games, you’re going to find certain things non-intuitive and sometimes downright puzzling. It doesn’t help that the tutorial basically dumps a whole lot of information on you at once, but it’s even worse that the information it gives you is nowhere near adequate in teaching you how to play the game. Back in 1999, this was handled by having a manual that explained everything without forcing it all on you during play. It would be nice if there was an in-game manual to consult that explained all of the icons and possible actions. On top of this, I found clicking around on the main map can get a little fussy at times, though that may be a function of my sausage fingers more than anything else. 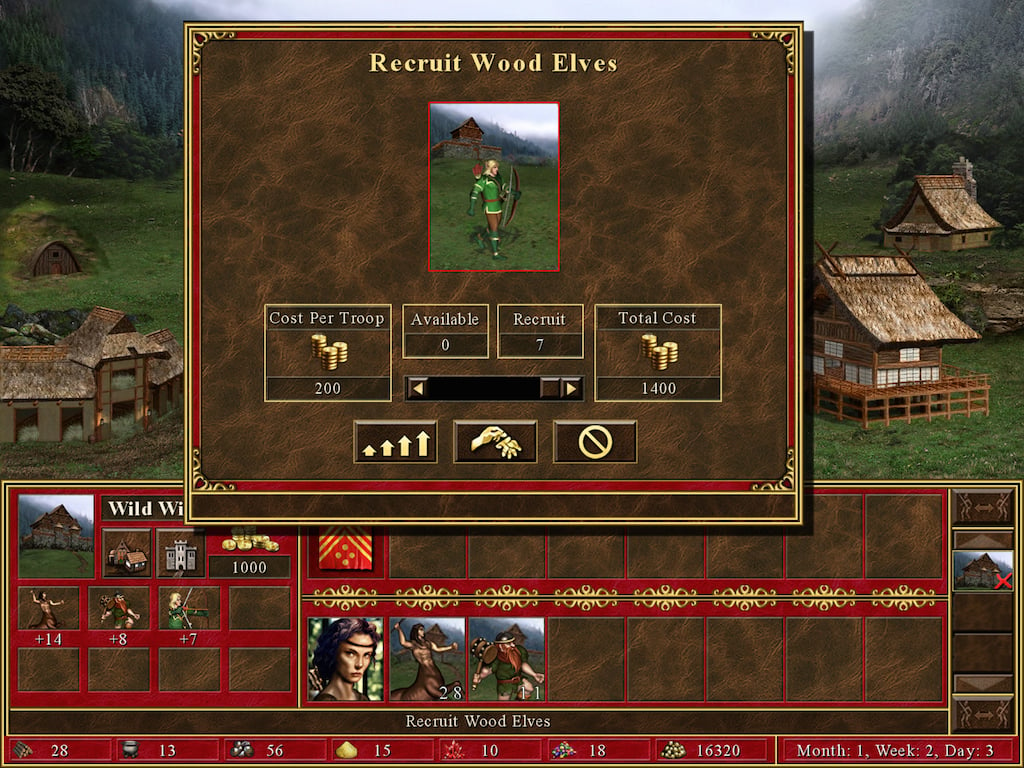