As a rule, I try not to buy early access games unless I absolutely feel the need to. Particle Mace ($2.99) on desktop was one of those games I stayed away from, but always had in my mind: the concept seemed intriguing, plus it was iOS bound sometime down the road. As such, when I found out that the game was leaving early access and releasing for iOS, I was extremely excited. One, I like seeing games actually leaving early access and becoming finished products, because early access trades on respecting your customer, and delivering on the promise that you’re finishing what you started as a developer. Early access can be a really great thing for developers and for players, but when developers use it as an excuse to just make money off of unfinished games, it’s saddening. Two, I was excited to actually play the game without compromising my principles. I’m willing to bend them when I feel like it, so I’m perhaps not the person to listen to, but I stick to it more often than not. Well, Particle Mace was well worth the wait. And the developer, Andy Makes Games, was smart in tweaking the game to fit iOS. 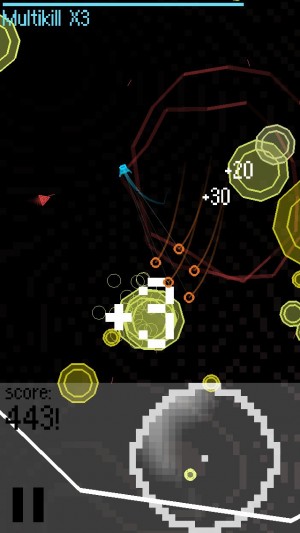 Particle Mace puts you in control of a ship that has a series of maces tethered to it. As such, your goal is to fly around, swinging the mace and mastering the physics in order to bash enemies and asteroids which populate the game’s playing field, the asteroids splitting into smaller rocks when hit. There are multiple ships with different behaviors, so you not only have to learn how to fly the ship around, you have to use the tethered mace to your advantage. Flying around in circles can swing it around but may not be precise. I like to fly in one direction, then stop and reverse field, allowing it to swing back behind me and hit enemies that were once in front of me.

Hitting asteroids gives you a single point, with 10 points awarded for hitting the red enemies, and a score multiplier awarded for killing enemies in succession, which also counts toward rock smashes, but enemy bopping is necessary to keep it going – and those extended enemy kill chains are absurdly lucrative.

The game does a fantastic job at making hitting an enemy feel impactful, with a slowdown moment allowing for the impact to set in, and the large point value prominently displayed. It’s worth killing enemies, and it feels good to do so. Making actions in a game feel good to do is an important part of making a game fun. The whole thing is just so much fun to play, and perfect for picking up and playing again and again. It’s like everything I love about the Tilt to Live series but with a joystick and a giant physics mace that I can smash stuff with. 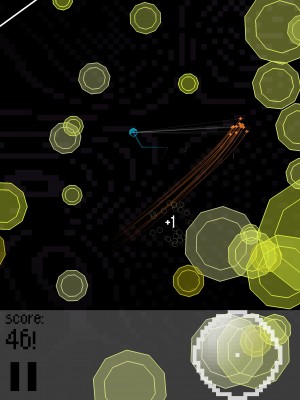 The game is identical to the desktop version minus the multiplayer modes, but that still leaves four different modes for a fraction of the desktop version’s price. Easy and Hard both have you trying to get as high a score as possible, with Hard providing more threats. Asteroid Field eliminates the enemies, but puts a whole lot of asteroids in your way. Mission mode is a unique beast, where you have three missions to complete at one time, and if you complete or get the fail condition for all three, the game ends. It’s ultimately about short bursts to complete all 150 missions over time, and provides a fun progression system to play with.

Performance in the different modes unlocks different ships to play with, though you’ll get the Normal, Fast, and Heavy ships pretty quickly. I like the Heavy: it forces me to be careful with movements, but really deals a wallop, and feels really satisfying to swing around. The different ship unlocks do provide a great amount of longevity to the game, and each plays in a different way. Different ships are tied to milestones in different modes, too, so you need to play every mode to get everything.

Particle Mace is played entirely in portrait orientation, which makes a lot of sense for this game: it’s perfect for playing casually, making it a different experience than on the desktop. This is now a game that you can play on the bus, or just sitting back watching TV, or however you want to play. Playing a game in portrait is just such a different experience than playing in landscape. While I would appreciate the option to play in landscape, and even with an MFi gamepad, they’re not the most dire of omissions. I have gotten to play the game on desktop, and I have to say that playing with an actual physical controller feels better, but my iPhone 6 Plus is a more convenient portable gaming device than my Surface Pro is, at least at the moment! There’s no syncing between devices with iCloud, which I would love for the ship unlocks and mission mode in particular.

I appreciate the options given with the game, as well: while the default is to have the control wheel centered, which works great on the iPhone, this is perhaps suboptimal on the iPad. Thankfully, you can disable the center positioning and move it off to either side, which makes the game feel great. There’s also a colorblind mode, which is always a great addition for those who need such functionality.

I got to play the game a bunch over the PAX South weekend, and it swiftly became my go-to game whenever I had downtime. And I see myself continuing to play it long after this, because the combat system is so much fun to play with, and there’s depth in the various modes and systems in play here. I really recommend this game: it’s just so much fun and I see myself playing this for a long time to come.