Last year when I reviewed TouchMint’s Adventure To Fate ($2.99), I suggested in the review title that if the game were boiled down much more, there wouldn’t be anything left. Apparently, the developer took that as a thrown gauntlet, because the follow-up to the game, Adventure To Fate: Battle Arena (Free), manages to trim the concept down even more. Remarkably, it does so without losing any of the things that worked well in the first game, making for a more smartly-paced game all-around. Fans of the original title should be very pleased, while those who felt that it was a bit too grindy might be happy about certain cuts. Don’t be alarmed by its free price tag, it’s one of those good ones that makes you wonder how the developer plans on making any money.

The story goes that the hero of the first game was successful in rescuing the missing king, though it cost him his life. Battle Arena takes place 100 years later, where in honor of that brave hero, a tournament is being held for all who wish to participate. The challenge is to fight your way through multiple battles in each combat arena, working your way up through the ranks until you reach the final battle. Each zone offers a shop that sells equipment and items, portals to the zones before and after, and a storage area that you can’t immediately make use of but is the key to breaking the game in the long run. New to this installment is a crafting system that allows you to used dropped parts from enemies to construct weapons, armor, potions, and more. 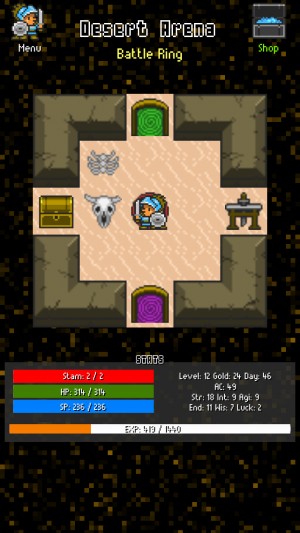 Basically, the game has cut out the dungeon-crawling aspect of the original title, instead offering up fight after fight. This ends up working out fairly well for the game. Rather than cursing and spitting at getting ambushed by random mobs with nearly every step you take, you instead can see which enemies you’ll be facing next, have the choice to engage them at your leisure, and have all the time in the world to prepare. It’s a big change to the game’s tempo, but I think it’s a positive one. With each fight, you’ll gain experience, gold, and items, all of which can make your character stronger. Losing a battle only costs you time, reducing your potential rewards, but setting you back in the arena with both health and magic refilled. If you’re having too much trouble with a particular battle, you can go back to earlier ones if you’re willing to pay the price. Leveling up unlocks new abilities and new crafting options, and just like the first game, you’ll eventually end up with more abilities than you have slots, forcing you to make some strategic choices.

One thing that hasn’t been cut is how simple it is to pick up and play when you only have a short bit of time to fill. In fact, that aspect of the game shines even brighter this time around, since you don’t have to even remember which direction you were walking in. You just head to the arena, pick a fight, and get on with it. Since the game progresses from fight to fight, it’s all too easy to fall into the pattern of having just one more battle before you stop. If you do one more fight, you might be able to level up, or maybe afford a new armor piece, or maybe craft a new weapon. You’re always on the verge of improving your character in some way, which is a great quality in any RPG.

Just as in the first game, you can mix and match various races and job classes to create your character. New to this game are professions, which determine the type of items your character can craft. Some of the more powerful jobs, races, and professions are locked from the start. You can unlock them using Fate gems, which you can earn in-game or buy from the game’s IAP shop. The gems are also used in certain crafting recipes and to replay cleared stages. These gems are pooled between all of your characters, so you can do multiple playthroughs with different characters to earn more of them if you’re feeling pinched. There’s apparently an update on the way that improves the rate you earn Fate gems and adds a gem doubler, but even in its current state, it’s not that bad unless you want to unlock everything immediately. Even the priciest item, access to the vault storage, can be earned for free simply by clearing the game once. 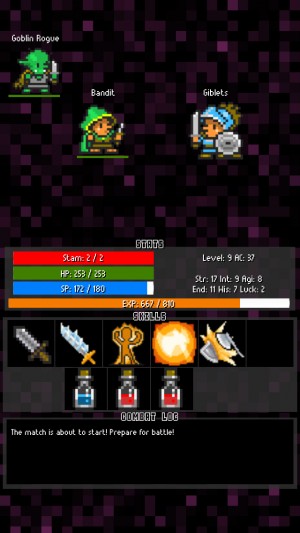 I mentioned before that the vault storage is the key to breaking the game. In addition to giving you a little extra inventory space, its true purpose is so that you can share items between different characters. Each character can only choose a single profession, but once they master it, they can create some extremely powerful gear. With vault access, you can theoretically pool that ultimate gear onto one character, creating a pint-sized powerhouse. It’s the cherry on top of an excellent equipment system. You’re constantly getting new pieces, and what’s best for the current battle isn’t necessarily the gear with the highest numbers. Since you have the benefit of being able to prepare for each battle with full knowledge of the enemies you’ll face, you can take full advantage of the ins and outs of Battle Arena‘s robust arsenal.

The battles themselves are turn-based affairs and are generally quite brief. You once again only control one character and can face off against up to three enemies at a time. There are plenty of buffs, debuffs, status ailments, and other things to consider, though as in the first game, winning battles is more about how well you prepare than how well you fight. Fortunately, the game is more carefully structured around that sort of system this time around. The battles offer just enough variety to keep them interesting, while the planning stages are immensely satisfying. Since the game is just a big series of battles with little in between, it can feel a bit grindy if you play it for a long stretch. That said, I’m not sure a person is actually meant to sit down and bang the game out in one playthrough.

The difficulty actually gets pretty intense in the later stages, so you have to make full use of everything at your disposal. At the moment, that includes watching ads to get a blessing that boosts your stats for the upcoming battle. With the balance on the gems being rather generous, it’s clear the game in its current form is meant to be supported by its ads. You can watch ads to gain the aforementioned blessing, to score bonus loot from battles, or to replay cleared battles in lieu of paying the gem fee. Once you reach a certain level, you’ll also see banner ads during battles. The upcoming update will apparently allow you to buy an IAP to remove the ads if they bother you too much, but you have to get really far into the game as it is to see any ads you didn’t choose to. 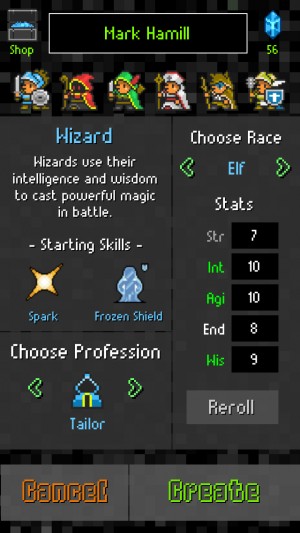 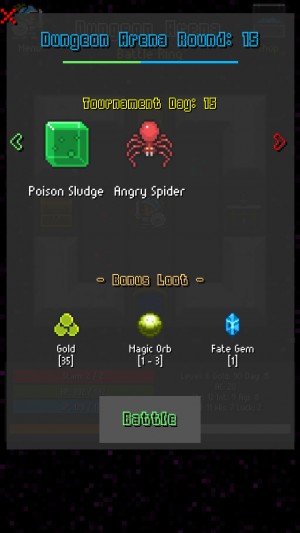 Once again, presentation is a weak link, however. The game uses the Oryx sprite set that any developer can license and use. It’s not a bad looking set of sprites, but I think a few too many iOS developers have used it, giving the set a generic feel. I suppose there aren’t a lot of choices out there, though. The music is mostly recycled from the previous game, and I’m still not a big fan of it. The UI is again a bit clunky and not very intuitive, and from a visual standpoint clashes with everything else. The game provides all of the information you need, but it’s sometimes a real chore to get at it. The shops in particular could use a real overhaul. I’d love to be able to compare shop items to the gear I currently have equipped without closing out of the shop, opening my inventory, and memorizing everything I’m carrying. If there’s a way to compare equipment without doing that, I certainly couldn’t find it.

Adventure To Fate: Battle Arena is an excellent sequel to the first game. It cuts some of the stuff that didn’t work that well, doubles down on its strong points, and adds a bunch of new things for players to play around with. That it does all that while shifting from a premium model to a free-to-play one while still maintaining a fair balance is nothing short of a miracle. To be honest, after the first game, I expected TouchMint to go bigger with the concept to improve it, but the developer instead went smaller and still came up with a much-improved game. It’s not going to satisfy gamers looking for a big RPG experience, but as a streamlined take on RPG combat and character growth, it’s a strong one.