I must admit that I am a sucker for games with good craftsmanship. For me, good visuals, refined controls, little details, things that can seem often shiny and superficial reveal something to me, especially when they come from a smaller developer: they reveal that there is perhaps a deeper quality to pay attention to here. Crossy Road (Free) was so excellent to me not just because it is so much fun to play, but little details and tweaks made to game feel abound in that game, and they push it from “entertaining diversion" to “supremely excellent game." What we have here in Bit Dungeon 2 [appprice url="https://itunes.apple.com/us/app/bit-dungeon-ii/id823658485?mt=8" is the flip side of that coin: what happens when a game has a compelling structure, but lacks that last stretch of quality that makes the great games what they are? You’re left with an experience of what could have been.

Bit Dungeon 2 is an action-RPG roguelike by way of the Zelda series in particular. I say this because the game is structured around exploring a static overworld that doesn’t change from game to game, but having to defeat several dungeons with bosses, which do differ from game to game. You start as a neon-blue weakling with just a few coins to your name, which you can use to buy a weapon from a vendor helpfully near where you’ve come into the world. Then, it’s off to explore the overworld, fighting creeps along the way, getting experience, coins, and even item drops along the way that can turn you from naked dungeon crawler to a stylish warrior who won’t take guff from anyone, be they purple, laser-shooting quadrupeds or giant golems. 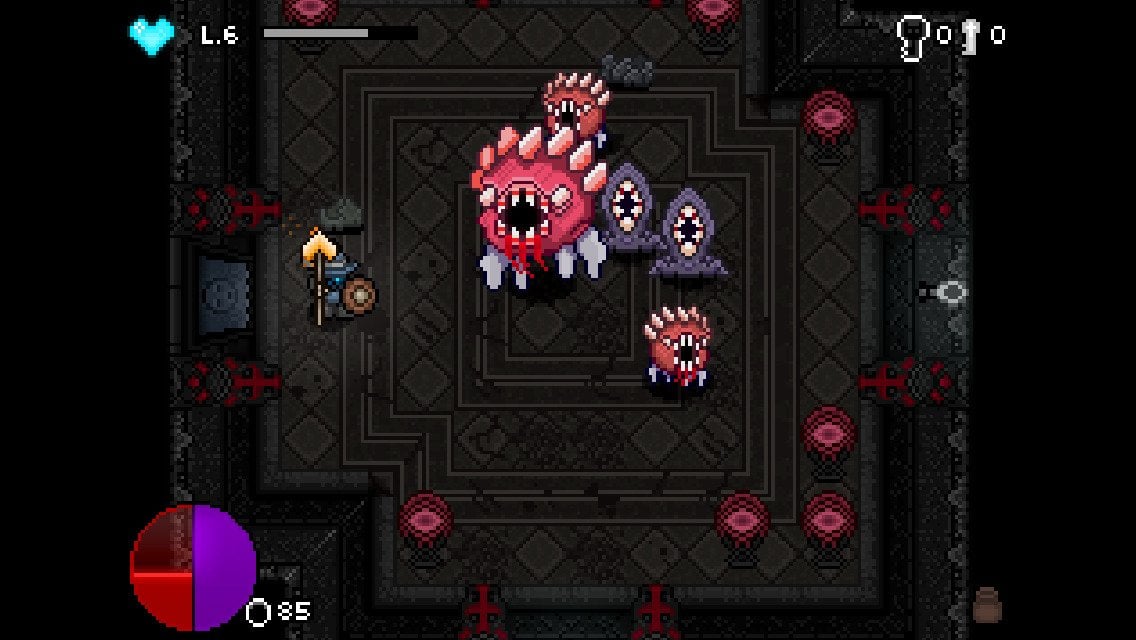 Bit Dungeon 2 is a fast-paced game, with swift-moving characters and plenty of enemies to fight pretty much everywhere. The game is controlled through single taps and holds, with charge attacks for weapons available by tapping and holding. This is necessary to fire projectile weapons, though melee weapons have special attacks that can also be deployed this way. It’s also possible to walk up to an enemy and rapidly tap them in order to use a stamina-draining rapid attack of sorts, and these help to kill enemies from up close, but obviously they can deal damage back, and some enemies, if they trap you against a wall, are especially deadly. iPhone owners will be happy to know this game can be played in portrait as well as landscape, and while I don’t know if it’s one-hand friendly on the iPhone 6 Plus, a smaller phone may be able to handle this game one-handed. I mean, Threes ($5.99) is great but there’s not a lot of slaying of giant enemies. Mostly just slaying of giant numbers there.

Bit Dungeon 2 definitely doesn’t adhere to the typical permadeath formula of most roguelike type games. For starters, whenever the hero is killed, their soul gets left behind in the spot of their death, so it’s possible to go back and collect it, then die again and start the process over again. The game resets to level 1 upon dying without the soul, but with the money that’s been collected. It’s kind of an odd way to do things, at least with the money. 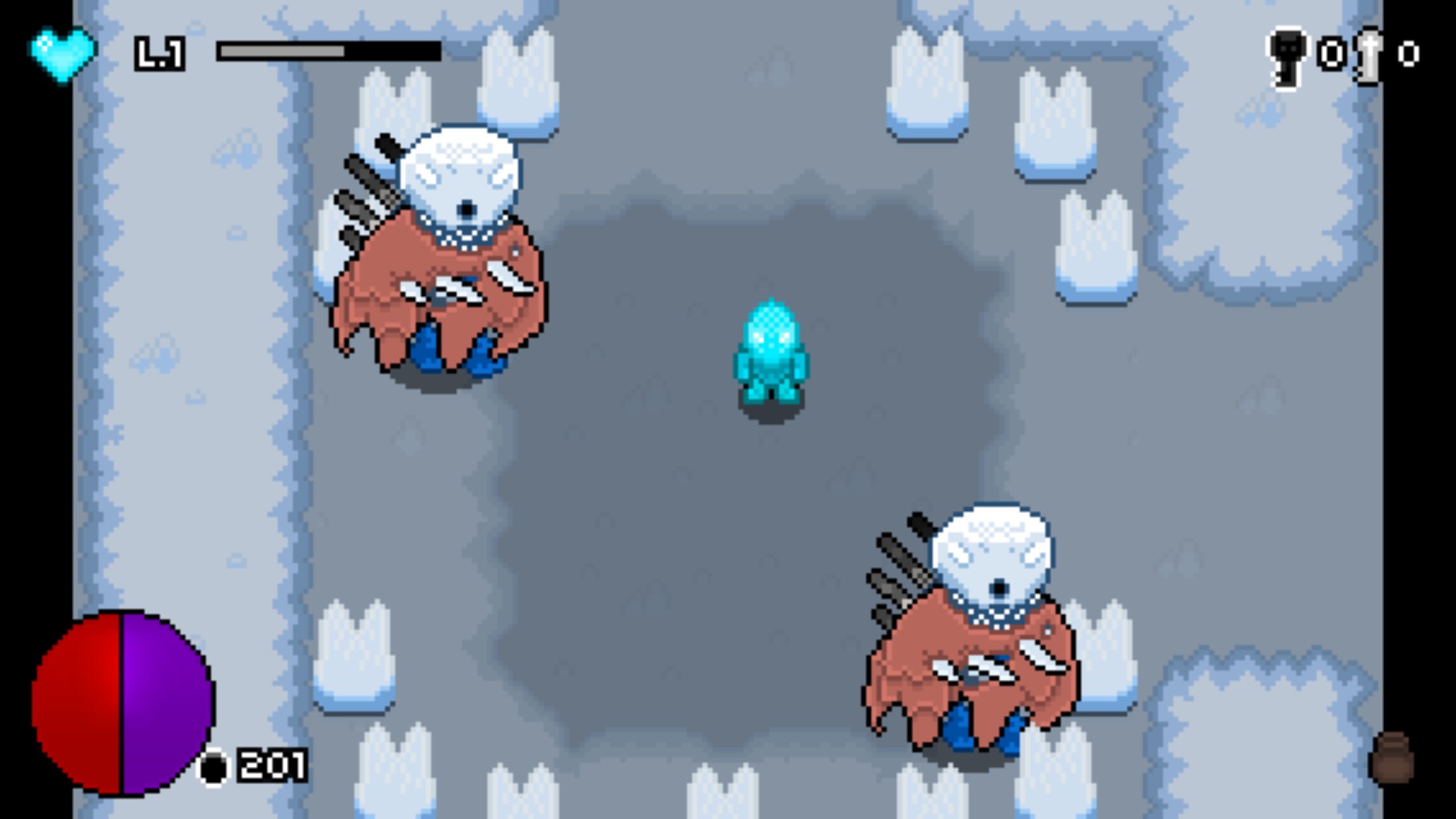 Finding one’s soul leads to one of this game’s key issues, and that is that the world is just so confusing to explore. Too many areas look exactly the same, so it’s easy to get lost. There are helpful maps available online for the overworld, which help when you’ve passed through one identical section of forest. Dungeons are different each time, but generally have tricks to them that you will catch on to in terms of their layouts. They never get to be too inventive.

Progression in this game is odd, as there never feels like there’s a clear point where it feels like you’re supposed to be somewhere or not. The game sometimes starts you off at random parts of the map when restarting from level 1, so I suppose this may be intentional, where you can explore and have a shot against enemies. Some will do a lot of damage, so be careful. It’s never a structure that ever really makes sense, though. 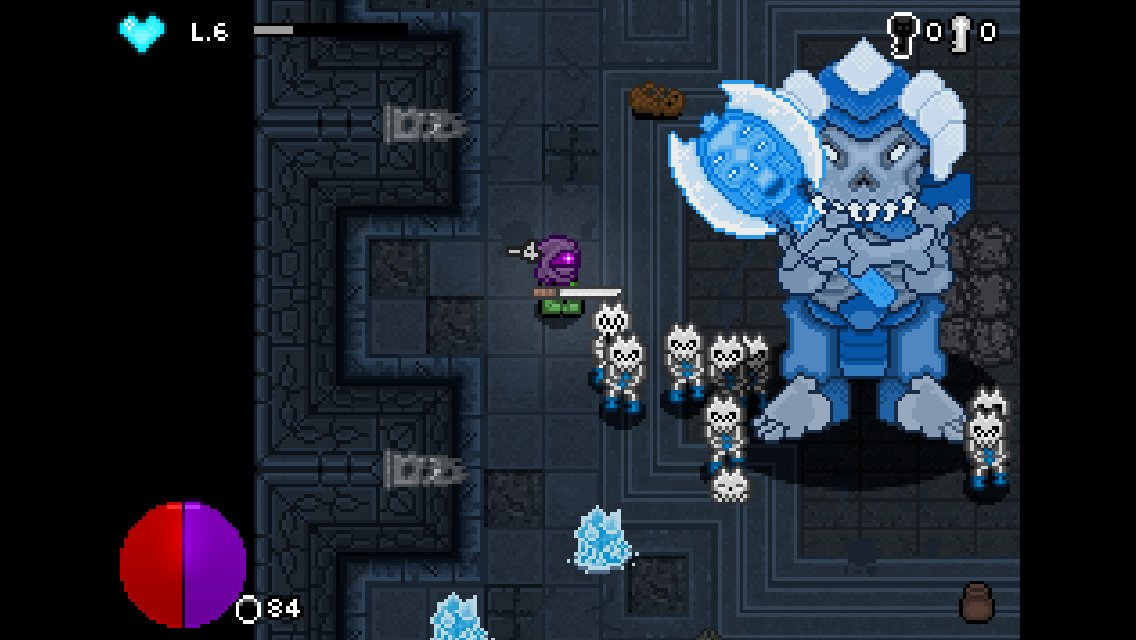 And really, the design of this game is just sloppy all around. The game wound up launching with a few issues, including the save functionality being broken. It’s just a game that’s really got an odd feel to it. Why is the game bordered on widescreen iPhones? Why do some charge attacks work at certain times and don’t at others? Why does the gamepad support not work at all? How can some enemies just maraud me, but giant enemies that should be threatening go down like it’s no big whoop?

It just really feels like this game needs more work in various points to become great. Roguelikes are great for mobile because of their highly-replayable nature. This game works with one finger, has a structure that recalls Zelda without copying it, has some great large-scale bosses to fight, fun magic and projectile weapons, and just a cool concept overall. But there’s so much sloppiness in how everything works, from the combat to the structure that it really hurts the game in my eyes. A little could go a long way with Bit Dungeon 2. If you don’t mind games that are very rough around the edges, this is an action-RPG roguelike to check out. But it’s not the best experience.