Tap Titans (Free) is the latest game to make me feel ashamed for enjoying it so much. After Bitcoin Billionaire (Free) ruined my life, I figured I was safe from clickers for a while. Then I saw Tap Titans on the App Store, and heard it mentioned in a comment that I was probably enjoying it. I wasn’t yet, but that spurred me to check it out. And I’m either really glad I did, or really distraught that apparently my tastes are this shallow that the very semblance of a game is enough to satisfy me.

Like your standard clicker game, the goal of Tap Titans is to tap rapidly towards your goal, along with passive boosts, all in the name of progression. Here, the game is structured like an RPG, as you tap for the leader hero, and have a band of heroes who do passive damage each second. You have enemies to kill with your taps, and they drop gold, which can be used to upgrade the leader’s damage per tap, and the hero team’s damage per second (DPS), with later heroes having a greater DPS. 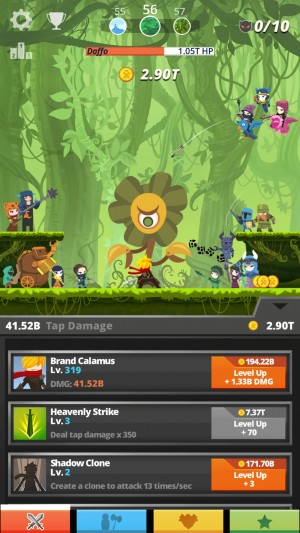 The RPG structure brings in a lot of cleverness. The leader has a bevy of special abilities that can be used to fight enemies and the powerful bosses that pop in, which can do massive damage, attack faster, or bring in other effects. These abilities are all on timed cooldown timers, however, so you have to deploy them carefully. Still, there’s a multiple choice in play here.

The hero upgrade system is fun to play around with. While in general, it’s worth upgrading later heroes to get more DPS, which is remarkably important for killing bosses, there’s also benefits to upgrading earlier heroes, as they can provide permanent bonuses like a global boost to damage percentage, or increasing gold drops, when they hit certain milestone levels. While the damage gain from earlier heroes is rarely enough to be consequential, it makes it so that there’s value in upgrading everyone on the list at some point, because those percentages can add up. As well, more DPS on the heroes means more gold when the app is closed. Unlike Bitcoin Billionaire, there’s no concrete limit for when gains stop, at least not specified. If you hit a wall, the best thing to do is to put the game down for a while, come back, and enjoy a Scrooge McDuckian level of riches.

The boss fights push Tap Titans to a new degree for clickers. The bosses must be defeated within 30 seconds in order to progress, and they serve as a necessary function of the game. Otherwise, the game would be about just the grind, and probably fun enough as is, but because it’s possible to just kind of stop when fighting a boss, there’s an added dimension here, there’s something actively impeding progress. Granted, the solution is more tapping and farming of gold in order to get out ahead of things, but there’s at least an impediment that requires a modicum of effort and a fail state! This is officially a game by a formalist definition! Drop the balloons! Mission accomplished! 2014, we did it! 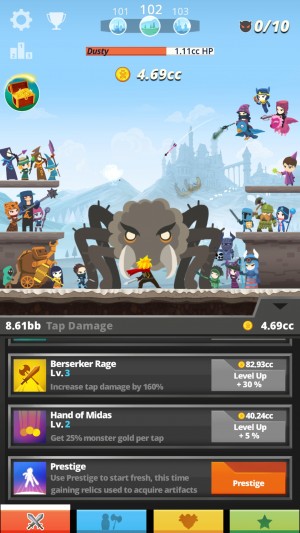 The number of bad things that can happen to your heroes are few, surprisingly. Bosses can occasionally kill heroes, but not often enough that it’s a real threat to worry about spending the gems on reviving a hero (unless they kill your top DPS hero), nor to spend the gems on the shield. If it was more of a threat, or if more random negative events popped up, then I’d worry about it, but here it’s just an odd thing that happens occasionally, at least way early on. Fairies come along and provide the occasional cash boost or powerup, and some incentivized video ads for greater rewards.

The game does a great job at being free-to-play, even better so than Bitcoin Billionaire, somehow. The premium currency of gems is handed out through achievements primarily, but also through random fairy drops. It’s possible to buy protections/revives as mentioned, but getting a massive cash influx for 100 gems is the most intriguing option. Still, even after many hours of playing, I didn’t really feel the need to spend any money, and the non-incentivized ads are rare enough that I don’t feel the particular need to spend money to disable them, even if they do sneakily pop up and get activated while rapidly tapping.

If you find yourself wanting to use your powers often, you may find it useful to buy gems, but really, you’re only going to be using those against bosses, and it’s possible to play around the recharges, and with the financial bonus for letting heroes fight while you’re away, it’s not that difficult to play this game for free. Though I do appreciate the incentivized ads for big coin drops and powerups. But it’s definitely the kind of game where I’ll spend some money at some point just to show my appreciation, not even because I’ll get particularly tremendous value out of it, like with Bitcoin Billionaire. 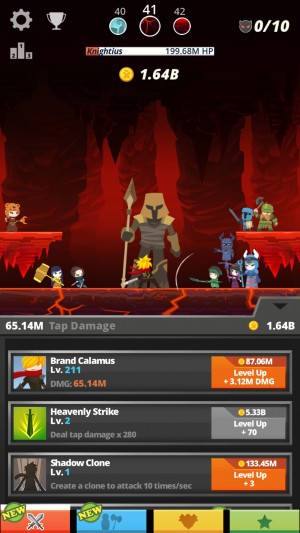 The endgame of this is curious, as it’s about getting to as many stages as possible, and that gets a lot more difficult the later you go on. You can prestige once the leader hits level 600, which starts the game over, but grants relics which can buy powerful boosts which make the grind back up a lot quicker, and getting to later stage counts easier than before. I mean, most clickers just kind of hit the “well, I’m done with this" stage, but this encourages stopping to gather your strength in both the short and long term to progress further.

I do wonder if Tap Titans is the most ideal version of what an RPG clicker could be. I’d love some sort of story to explore, or maybe some sort of strategy with elements, or hero customization, or something to really push the RPG part of this game’s formula. And the lack of negative events, at least consistently with the bosses, actually means that this is just a forward march until you hit the brick wall, prestige, and go at it again. Of course, considering that I have sore thumbs from the hours I’ve put into this, I perhaps shouldn’t complain.

I do wonder why I get so engrossed by clickers like this, and I think it’s because they provide all structure with nothing standing in the way to accessing the structure. The satisfaction of progression without any of the work to progress. Tap Titans is a fascinating deconstruction of RPGs, and it’s something that perhaps fits my tastes to a comical T. I have a folder of games like XCOM: Enemy Within ($4.99) and Icewind Dale ($9.99) sitting on my iPhone, and I think after this, I need to pay penance to the gaming gods by cutting my teeth on some challenging games and having to earn my success by doing something more than just tapping rapidly.

But hey, if you want something that will suck up your time with no barrier to entry, Tap Titans is the clicker for you. Otherwise, run away.