Platform Panic (Free) is an interesting game because it manages to straddle both sides of an interesting duality regarding retro-style and pixel art games. Pixel art games are always an interesting proposition because there’s a sort of confusing duality to them. Part of the appeal of pixel art is based on the limiting nature of retro games, with their low resolutions and limited resources demanding pixel art. So it gets used in part because it’s a throwback to the early days of gaming. But it’s also a bona-fide art style at this point that can be used in games that really don’t have much to do with retro games, but still just use that style. I mean, Superbrothers: Sword & Sworcery EP ($2.99) really isn’t much like classic games, but it’s got distinctive pixel art.

As well, the recent trend of flaplikes after Flappy Bird hit in the past year has led to plenty of games that have very limited scopes and usually limited art – and since pixel art is often simpler to create than other forms, games can get falsely called retro-style when they’re entirely modern in structure. I mean, retro games were often simpler, but not that simple. And then there are games like Shovel Knight on PC that actually try to adhere to retro structure and visuals, and muddy up the whole scene. 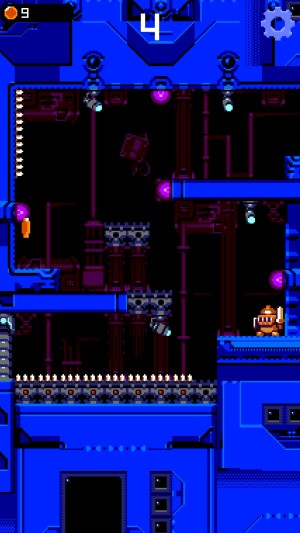 So here we come to Platform Panic. It’s a game that is curious because it actually straddles that reality of just using pixel art for its stylistic benefits, while also aiming for a retro feel. It’s a high score chaser built for short sessions and high replayability while being in portrait mode on iOS, but within that structure, it manages to pay homage to 8-bit games of the past.

The game is all about surviving through spike- and enemy-filled levels that come one after another. The levels come in a number of fixed designs, but presented randomly, and with different coin placements. A point is earned for making it to the exit of each one. There are coins to collect, and sometimes multiple exits, but just one goal, and an array of spikes, bullets, and enemies standing in the way. It’s the Flappy Bird of retro games, and I guess that while that was retro-inspired in and of itself, this is truly aiming for something retro-feeling but with a modern structure, that itself is meant to throw back to the past. The serpent eats its tail, I suppose.

The pacing to the game is unique since while the protagonist is always moving, there’s not really any pressure to finish a level quickly that isn’t built into the game itself. It’s possible with some levels to get to a point where there’s really nothing threatening to you, if spikes have all fallen from the ceiling, for example. Some levels do present active threats, but it’s still possible to just kind of mill around. But since points aren’t really earned at any sort of fixed time interval, I think it’s actually kind of nice. It’s definitely got a different feel to it, but not a bad one!

The controls in Platform Panic really are quite fantastic, as the swipes to jump and turn are incredibly responsive. Combined with the portrait view, this makes the game a perfect one-handed experience, and it’s quickly become a go-to game for when I’m riding a bus or just sitting around and casually playing a game. It’s surprisingly good for that, but you’ll probably do better when focusing. Still, it’s one of those great casual-feeling mobile games while still having a ‘gamer’ tack to it. 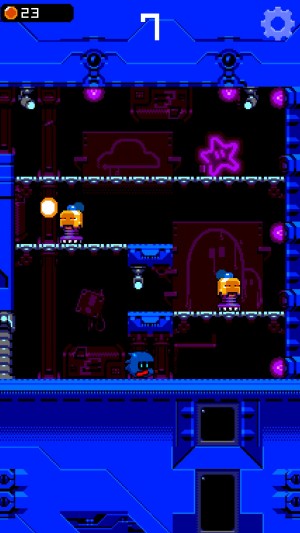 The game is a little ugly, but in a good way. The blue levels aren’t the most visually-appealing thing, but they do a great job at approximating the days when color palettes were limited on systems, and game developers occasionally had to make choices based on those limitations that weren’t always the most aesthetically-pleasing, but were functional. I will say, the color scheme here is quite distinctive. Nitrome also does a wonderful job with all their pixel art, and this game is no exception.

The game boasts a number of characters who serve either just as the kind of characters you’d see as the star of some random NES game you’ve never heard of, or as pastiches of existing retro characters. The Blue Rodent blurs the line between “Sonic pastiche" and “here’s a rip-off version of Sonic" but as a Sonic fan, I approve either way. Also, this makes Platform Panic by extension the best Sonic game since Sonic 4 Episode 2 (Free). But they do a great job at making characters which look like retro pastiches.

All the characters are unlocked by spending the coins earned in-game on unlocking them. Coins are usually pretty tricky to get, so there’s a balancing act between staying alive and getting coins in each level. The coins can be used to continue when dying as well. It’s possible to buy coins via in-app purchase, but the most you can spend is $3.99 for 5000 coins, which can unlock all the characters and then some, this is hardly the most intense or pushy free-to-play experience ever. There is the balancing act of saving coins for continues or for unlocks, but all the characters are cosmetic anyway, so it’s not like it really matters all that much. There’s the occasional ad, with a $1.99 IAP to disable ads entirely.

I’ve caught a whiff of some anger surrounding the continues system and how it would be possible for someone to buy their way on to the leaderboards. Technically, yes, but realistically no. The cost in coins to continue a run starts at a modest 15 coins, but doubles after each one, and you have to start the room from the beginning, so there’s no real easy shortcut. Could someone spend money on IAP for loads of coins to just continue endlessly? Sure. Will anyone do that? No way. I’m in favor of setting a maximum number of continues just out of principle, as one or two continues can help increase a score by a few points, but it’s hardly game-breaking, or leaderboard-fairness-annihilating. Incentivized ads for continues would be a welcome addition, and probably a nice compromise too.

Honestly, I think that anyone who loves pixel art and retro-style games should be playing Platform Panic. I think that for what it does, which is being a smaller, casual arcade game, it does a good job at being something fun to sit back and play again and again, while also trying to be retro, not just use the pixel art aesthetic.