Every year it seems as if the standard for what makes an iOS game great rises. That was certainly true for this year’s batch. What follows is a short list of some of my favorite games that were released this year. As always, the list is not exhaustive and tailors towards particular favorite tastes (namely RPGs), but there was at least one surprise in there for me that hit me relatively late this year.

Modern Combat 5, Free FPS titles on iOS have come a long way, and the evolution continued with Gameloft’s Modern Combat 5. The game’s single player offerings were decent and offered a typical high quality experience. However, the multiplayer is where MC5 shines and offers a deep progression system that’s simply unmatched on iOS. Even though the game has been out for awhile, multiplayer is still relatively popular which speaks to the staying power of the game’s underlying systems. FPS titles on iOS still aren’t perfect, but in regards to Modern Combat 5, you can’t find a better gameplay experience at this point. 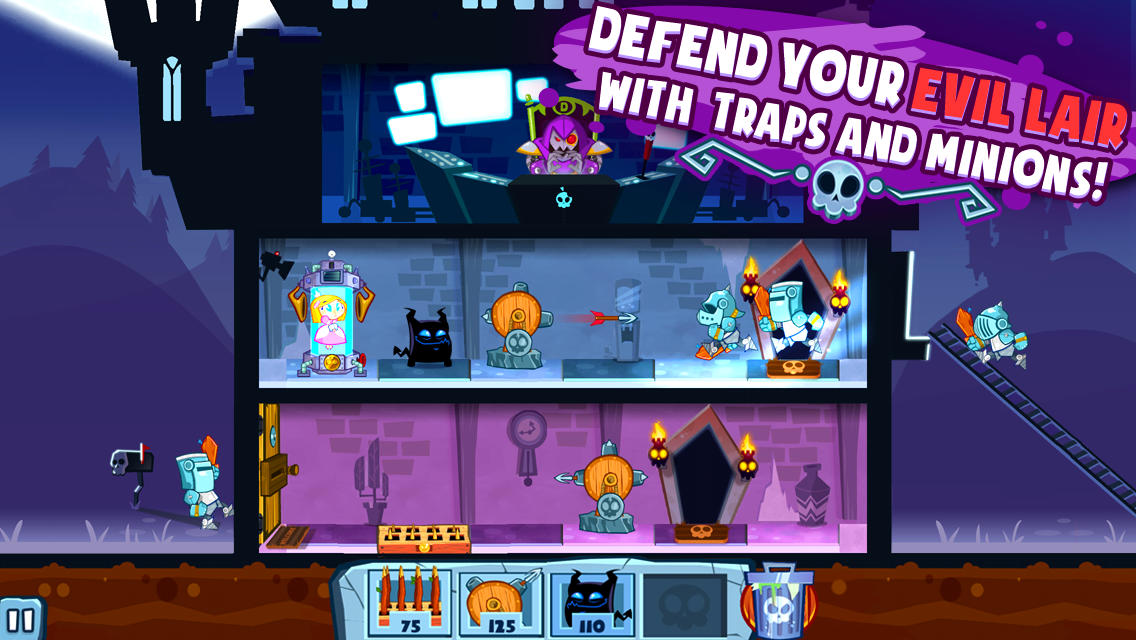 Castle Doombad, $2.99 Castle Doombad – As it always seems to be the case each year, there were a ton of tower defense titles that came out on iOS this year. However, my favorite has to be Adult Swim’s Castle Doombad. Doombad turns the table on the standard story by having you guard a castle with a damsel in distress at the top against multitudes of heroes. The game also takes full advantage of its vertical nature with some interesting ‘towers’ in play. Finally, the writing is simply awesome and hilarious, making it standout from the crowd.

Avadon 2: The Corruption HD, $9.99 Avadon 2: The Corruption – Spiderweb’s Software’s numerous RPGs have found a perfect home on Apple’s iPad platform, and Avadon 2 continues that trend. A top-down, turn-based highly strategic RPG, Avadon 2 also has a rich tale to be told while doing a great job of always giving the player an opportunity to explore the world on their own. Considering the vast amount of side quests and optional dungeons, players can explore said world for dozens of hours easily. If you’ve never had the pleasure of playing a Spiderweb game, you can probably try Avadon 1 first, but this one is just as good.

DRAGON QUEST IV, $14.99 Dragon Quest IV – Just as is the case with the Final Fantasy series, everyone has a favorite Dragon Quest. For me, that honor goes to Dragon Quest IV, one of the first RPGs I played that really got me into its story. With a chapter-based tale culminating in an epic tale that weaves everything before it into an amazing adventure, DQ IV is about as traditional as it gets in terms of the DQ gameplay, but that just makes it even more appealing in my book. I’ll never forget the beginning of Chapter 3 and being able to play as a shopkeep, selling weapons to adventurers and earning coins. I also had no issues with the game’s transition to touch controls, which is a pretty important point. iOS is home to a good majority of the DQ series, and if you’ve never checked it out before, this is as good as any available to start with.

Wayward Souls, $7.99 Wayward Souls – I just love Wayward Souls. The spiritual successor to Rocketcat’s Mage Gauntlet, it’s an action-RPG that does an amazing job of incorporating rogue-like qualities. The combat and pixel-perfect visuals feel eerily like Secret of Mana, which probably accounts for some of my love for the game. There’s also the story which is unveiled as players slowly make their way through various dungeons, earning currency to upgrade heroes. The rogue-like aspect comes from the fact that you’ll probably be dying and restarting dungeons a bunch until upgrade your heroes enough to withstand the game’s difficulty. However, the battle system and visuals are so great, I’d willingly replay it over and over just to experience it.

FTL: Faster Than Light, $9.99 FTL: Faster Than Light – I’d never played FTL prior to checking it out on the iPad, and I sorely regret that decision. Piloting your ship through the vast emptiness of space evokes strategic thinking, hectic action and randomization which all perfectly combine into an experience that keeps you coming back for more. It’s the ideal example of a game where the journey is the reward while the destination is almost incidental (even though that’s the whole motivation for the game).The iPad port, meanwhile, is the definitive version of the title with touch-screen controls that work perfectly on Apple’s tablet.

XCOMÂ®: Enemy Within, $4.99 XCOM: Enemy Within – Sadly I never had the pleasure of checking out Enemy Within (Or Enemy Unknown for that matter) on the PC. Luckily, the iOS port was so amazing I never needed to. Enemy Within is a pseudo-sequel to one of the best turn-based strategy titles recently released regardless of platform so of course it makes sense it’s at the top of the genre list on iOS. if you’ve not had the opportunity to check out humanity’s next Earth-saving mission, you owe it to yourself to pick up XCOM.

Threes!, $5.99 Threes! – Simple puzzle games aren’t usually my deal, but Threes! got me hooked in a way that no other similar game has managed to do. The awesome presentation, approachable gameplay, leaderboard support and mathematic appeal just made it one of the cooler puzzle games that I’ve checked out this year. It’s truly a shame that in some aspects it was overshadowed by lesser clones, but everyone needs to check out Threes! regardless.

Vainglory for iPhone, Free Vainglory – In my view, my personal game of the year should be whatever title takes the most of my time willingly. In that regard, Vainglory wins hands-down. One of many mobile MOBAs that launched this year, Vainglory doesn’t have dozens of characters nor does it currently have a skin system or anything beyond permanent character unlocks for its currency. However, it doesn’t need any of that as the actual gameplay is so fine-tuned and balanced it makes every match an exciting, entertaining experience. Characters and abilities are diverse, the controls are nearly perfect even on an iPhone, and the visuals are simply stunning (courtesy of Metal). While some aspects have been simplified for MOBA, this is still the real deal with loads of depth and strategy available for players willing to put in the research to succeed. Also, I have no doubt as to the continued support it’ll receive from its developers, meaning the best is yet to come for an already great game.