I’ve never really had a bad experience with cab rides. Maybe it’s because I don’t live in a major city and don’t take them every week, but as a general rule, when I do take cabs I have nothing major to complain about. At the very least the driver isn’t annoying, which is what the typing trainer Annoying Cab (Free) is all about.

In the same vein as Mario Teaches Typing and Typing of the Dead, Annoying Cab is a keyboard based typing affair. Words will appear on the screen in sentence form, and it’s up to you to “type" (tap) the phrase to earn points. Like most typing games you’ll be scored constantly, and your character-per-minute ratio will be tracked. There’s a lot of things that need to be finely tuned for a typing game to work, and unfortunately, Annoying Cab fails at most of them.

For starters, the dialog doesn’t feel natural — like it hasn’t gone through an editing process before it was unleashed. The driver will initially say something and you’ll respond, but the odd choice to put in internet lingo like “OMG" definitely throws you off. The actual line that the player types feels off as well, as periods and spaces do not need to actually be used when typing. 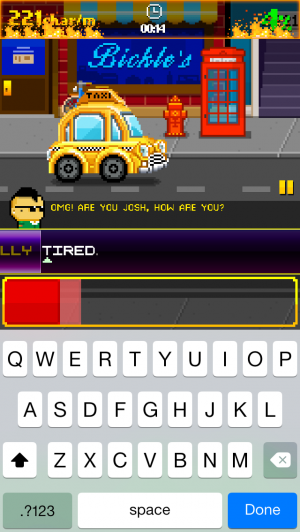 There’s also a lot of awkward dialog that most people will not want to type back even if Annoying Cab was more polished. One conversation in particular involves the cabbie picking up an old friend, whom he doesn’t recognize because “he’s so fat now!" You’ll spend a roughly a minute talking about how fat he is, which is really strange and not particularly funny.

Mechanically, it’s a bit weird to typing as quick as the game wants you to on a mobile device, but it is accurate. The big problem is that subsequent rounds (conversations) do not refresh your life bar after completion. So if you’re about to lose and you nail the final section, the next bit will basically fail automatically. It feels like an attempt to gate the game and artificially extend your playtime — why not just score players based on their typing skill and allow them to see new content and conversations? This is especially problematic because so many of the initial dialog options repeat, so it feels like you’re reliving the same experience over and over.

In terms of positives, Annoying Cab has a great art style that brings me back to the retro era, and the characters are unique enough to stand out. I felt like I was playing a beat ’em up while the screen scrolled on the city streets, which is only a good thing — major props to the artist.

It’s also very difficult (partially because of the broken dialog), which is actually effective at teaching me how to slow down, think, and type. If you can get over all of the above issues, there’s a decent learning tool to practice on here.  The monetization strategy is also fair, as it allows you to download the base game for free, then remove ads for $0.99. You won’t have to break the bank to give this one a shot.

Annoying Cab could have been a lot more than the finished product shows. It has a great art style and I can’t get enough typing games — it just needs a lot more time in the oven, and maybe an editor.