You don’t win the tutorial mission in BattleLore: Command ($6.99). I found that kind of interesting, and in a way, it sets the pace for this strategy board game adaptation. While many strategy games like to puff you up with some early victories before pulling out the Customer Service Bat, this one teaches you the basics of how to play in a couple of turns and then almost immediately comes at you virtually as hard as it ever will. It’s a real sink or swim situation, but if you’ve got the wits and patience to see it through, you’ll find a game with a very rewarding core that suffers a bit from its overall lack of options.

A little research tells me that BattleLore is based on the board game, not the Finnish metal band. As there’s not much of a board game community in my local area, I’m a bit out of date on games from the last decade, meaning I’m neither familiar with BattleLore nor the Commands & Colors rule set it’s based on. I do have a firm appreciation for board games, however, and I enjoy a good strategy game as much as anyone, so hopefully my specific inexperience won’t hamstring things here too much. The Commands & Colors line of games, as near as I can tell, are an attempt to offer deep strategic possibilities while still being accessible to newcomers. Not many games can ride that line well, but BattleLore does a pretty good job of it. 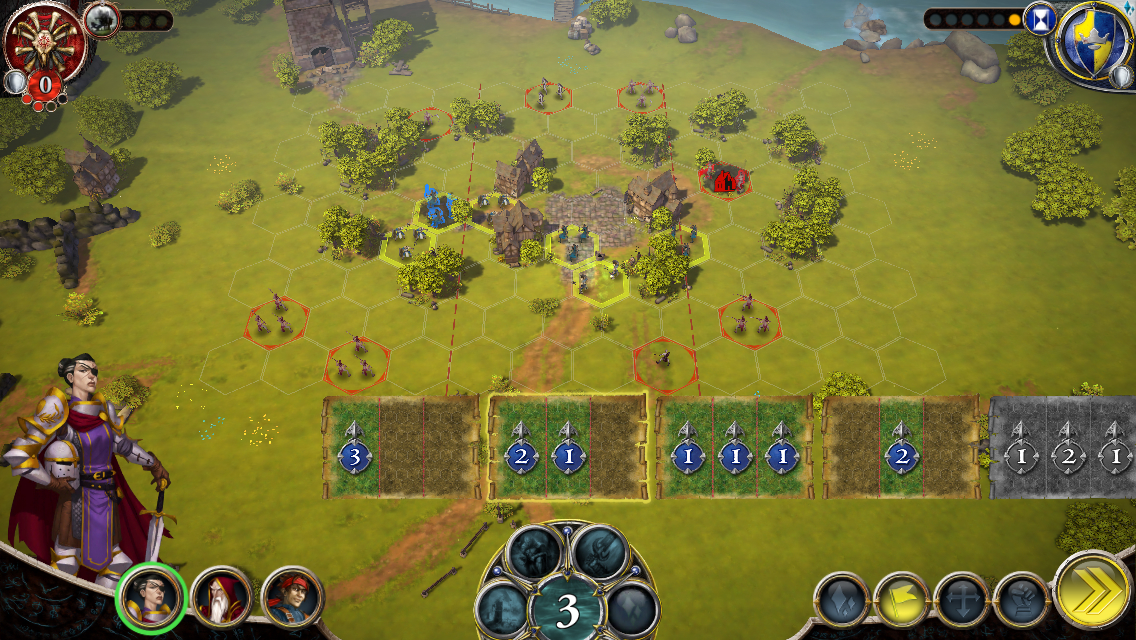 The game takes place in a medieval fantasy world that pits the noble and honorable blue guys against the vile and frankly repugnant red guys. The main campaign, which should be your first stop, tells a story that branches out into different missions as you go along, with a little bit of flavor text setting the stage for your next battle each time. After you beat a stage in the campaign, it’s available for replay at your leisure in the game’s skirmish mode, and you can even play as the horrible red guys if your heart is dark and devoid of love. Seriously, I hate those red guys. Rounding out the modes is the expected multiplayer mode, but unexpectedly, it only supports local play. Apparently, online play will be coming in a later update, but for now, this is effectively going to be a single player game for most.

That’s fine, though, as some of my favorite strategy games are for all intents and purposes single player affairs. BattleLore may have come from multiplayer-only board game roots, but its mechanics are just as easy to appreciate against the computer. If you’re not familiar with the Command & Colors system that it’s built on, you’re probably going to be a little bit confused at first, but the game has a really decent tutorial that explains things well enough for you to fill in the blanks within a game or two. There are a lot of interesting ways BattleLore differentiates itself from typical strategy games. Each turn is broken down into phases, making your options and input clear at all times. First, you’ll draw a random Lore card, which is basically a magic spell you can use to swing things in your favor. Next, you’ll need to choose your plan for the turn. You can’t move all of your units in one turn, you see. Instead, you choose from a variety of options that allow you to move a specific few.

Your plans are divided among three advisers, with the first, the warrior, being the one you’ll use most frequently. The warrior’s plans allow you to choose a few units based on which part of the playfield they’re occupying. The playfield is divided up into three zones, and you might have a plan that allows you to move, say, two units in the middle zone and one in the left zone. Once you use one of these plans, you can’t use it again in the same battle unless you use the scout adviser to refresh your deck. Doing that means only getting to move one unit for the turn, however, so you should only use it if your back is up against the wall. The third adviser is the wizard, and his plans cannot be refreshed after use. They’re very powerful, however, often allowing units to attack multiple times or with special effects added. 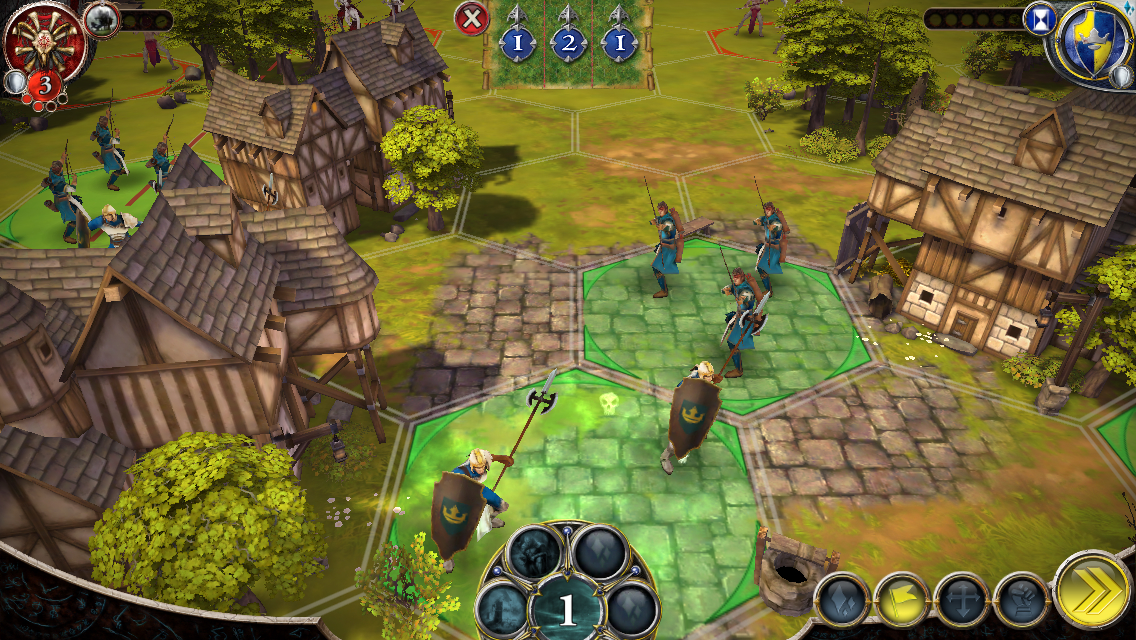 After choosing your plan and the units you want to use for the turn, you then move on to the movement phase, which works pretty much like any other strategy game. Just tap to move each unit to where you want them and move on to the next phase, the attack phase. In this phase your active units can attack enemies in range. You can also use many of your Lore cards in this phase. Attacking the enemy causes dice to be rolled behind the scenes, with the results shown to you in the form of symbols. Different units have different symbols for their hits, but basically, you’ve got hits, misses, Lore, and morale. Hits deal damage, misses do nothing, Lore adds a point to your MP, and morale pushes the enemy back one space. If the enemy doesn’t have a space to retreat to, they’ll take additional damage from morale. There are several other things to take into account, such as nearby units and terrain, but I’m going to keep it simple and cut it short there.

Once you’ve finished attacking, the only thing you can do is cast defensive Lore cards if you have any, but otherwise, the enemy will take their turn. Every battle has a set number of turns it can run, and if your objective isn’t earned by then, you fail the map and have to try again. There are lots of different story objectives, but they all essentially come down to offense or defense. You either need to secure points on the board yourself, or prevent the enemy from securing points. The boards are all fairly compact, with enough room to spread your units out, but tight enough to ensure steady conflict. Missions typically wrap up within about 20-30 minutes, though later missions can push a little bit beyond that. It’s a reasonable length for a strategy game with this level of depth, but as there are no mid-battle saves, you have to be very careful you’ve got enough time to actually play through the whole round. BattleLore tends to get booted out of memory pretty fast if you start doing something else on your device, and since there’s no way to resume battles, you’ll have to start the mission over again if that happens.

It’s one example of BattleLore missing options we usually take for granted on mobile. Another one is the lack of difficulty settings. The game is pretty hard right out of the gate, but by the end you’ll likely be comfortable enough with your strategies that the last handful of missions will be a relative breeze. That puts the game in the awkward position of being too hard upfront for newcomers and too easy overall for veterans, which would be fine if there were difficulty levels above and below this. Ultimately, the game relies heavily on the AI opponent in its current state, and while the AI is reasonably well-balanced, there are going to be a whole lot of people that find it to be a poor fit for their skills in one way or another. 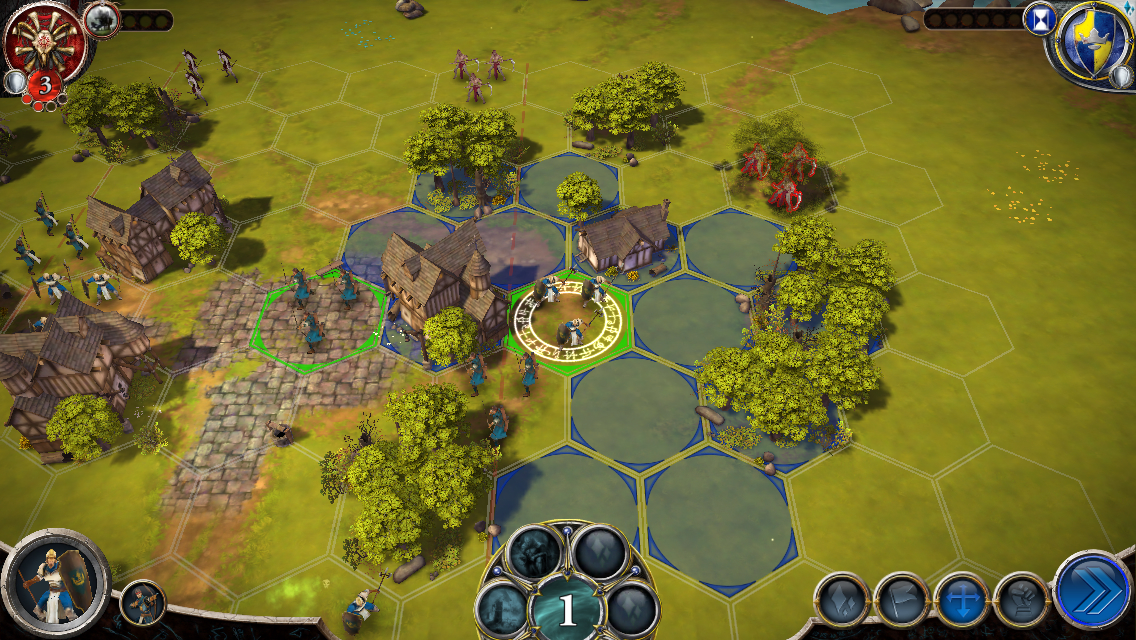 At the very least, the production values are excellent. The visuals are all completely 3D, allowing you to zoom right in on individual units to get a cinematic view or zoom all the way out to get a bird’s-eye view of the field. The UI is clean and easy to use, even on the smaller screen of iPhones, though some of the text can be hard to read at times. The sound design is also good, with an excellent voice actor reading off most of the story text in the game. The sound effects and music hold up their end nicely, giving the feeling you’ve wandered into a slightly off-brand Lord Of The Rings battle. The story reads well enough and gives good context to the campaign battles. As for options, you don’t get much more than the ability to fool around with sound and music volume levels. There’s no support for Game Center, and as I mentioned before, multiplayer is limited to local LAN only.

BattleLore: Command‘s gameplay design is outstanding, and its solid presentation helps it deliver on it in stylish fashion. The single-player campaign alone provides hours of entertainment, though how well you enjoy is going to depend heavily on how well the AI matches your skill. The skirmish mode gives you plenty to keep busy with after you finish that campaign, though again the lack of difficulty settings keeps this mode from reaching its full potential. The biggest omission at this point is the lack of any sort of online multiplayer. If that’s important to you, BattleLore isn’t going to have much to offer. I also strongly feel the game needs some kind of quicksave option during battles, because the reality is that a lot of people are playing on the go. Nevertheless, it’s a superb strategy game and I think you’ll easily get your money’s worth out of what’s here already as long as you’re willing to take a few lumps while you learn to give them.