Tower Of Fortune ($0.99) developer Game Stew is a hard developer for me to get a read on. I mean, I think if you look hard enough you can find a designer’s fingerprints all over just about any game, but you don’t even have to do that with Game Stew. Their games are instantly recognizable thanks to their consistent, unusual presentation style. If you do choose to look a bit harder, you can see that also carries over to the gameplay, even if some of their games are ostensibly in different genres from each other entirely. It’s interesting because even though their games are generally quite unique from almost every angle, once you understand Game Stew’s way of doing things, you can reliably count on certain elements being present. Specifically, you’re probably going to have quite a few trappings of the roguelike genre. Being predictably off-beat certainly isn’t a bad thing. Tim Burton doesn’t seem to be suffering for it, at least. The big problem with having that kind of reputation is that you need to keep coming up with ways to keep your audience’s thirst for oddity quenched. 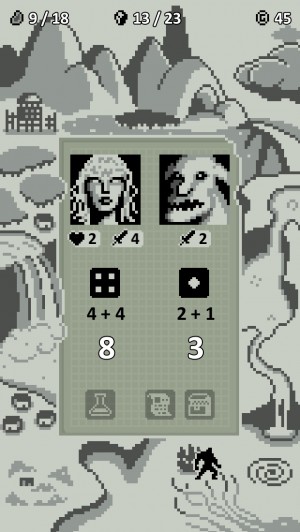 That’s where I felt Game Stew stumbled with their previous release, Devil Shard ($1.99). It had all the things you would expect from a Game Stew game, but it was wrapped around one of the more tired subgenres on the App Store, the match-3 puzzle game. The usual hooks of this developer were added, but to me, it just never felt like it came together to create something that stood out in that space. Luckily, that’s not the case with their latest effort, Ancient Legacy ($0.99). This game has all of the expected things a Game Stew release should have, combined with a very unusual and fun core set of mechanics. It’s basically a roguelike board game, done up in their usual retro, near-monochrome style. It does an absolutely awful job of explaining itself, so you will probably be quite confused initially, but if you take some time to sort out what it’s doing, you’ll find an awfully clever challenge here.

So, here’s how it works. Some evil bad guy is going to destroy the world as usual, and you need to find the four magical thingamajigs that will put a stop to him. You can select your hero from an assortment of fantasy characters, each with their own specific advantages. The base game includes four heroes, but the game sells several more for $0.99 each or $4.99 for the lot. After picking your character, you start off on what I guess we could call the overworld board. You won’t find any of the magical items, called Legacy, on this board, but you will find entrances to the other boards where they can be recovered. You’re given a few goals to work on, like accumulating gold and ore, and you might work out that you can upgrade your camp using these resources. With a roll of the dice, you can get your journey under way. 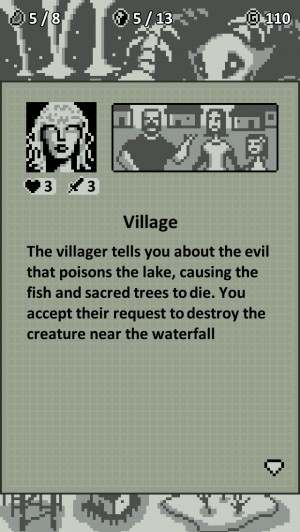 Now, in all likelihood, that first roll is going to take you to a square that offers you the chance to go to a sub-board called Lake Town. You might think this is a good place to start, since it occurs early on the board, and thus might take the game up on its offer. So, you head to Lake Town, you don’t have enough lamps to keep the place lit, the enemies are too tough, and you have no idea what you’re supposed to do, resulting in a fairly quick death. This is what I did, initially, and I found myself immensely frustrated. Really, unless you’re seeking a challenge, what you ought to do is take a couple of spins around the main board, gathering equipment and strength, before heading into any of the sub-boards. Once you figure out that flow, the game becomes a lot more manageable. It’s still a very challenging game, and like most of Game Stew’s games, there’s a huge luck component to success, but it’s more like a giant jawbreaker candy than the bowling ball it initially appears to be.

Your misadventures around the boards can have lots of different results. Certain squares have events on them where you roll the dice to see if they harm or help you. Other squares might offer a shop or trader where you can restock on goods. Still other squares are empty, offering you the chance to explore and see what turns up. You might come out with more materials, an enemy encounter, or a special event. If you’ve played any of this developer’s games before, the events will feel quite comfortable. There’s a huge variety to them, and the outcomes can vary wildly. As ever, your best friend is the chance to pay away your bad luck. You can reroll any outcome if you have enough money to pay for the opportunity. It’s up to you as to whether or not the negative outcome is worse than the loss of cash, a vital resource in this game, but the wise adventurer will always be packing enough spare gold to reroll at least once. Death is forever, after all. 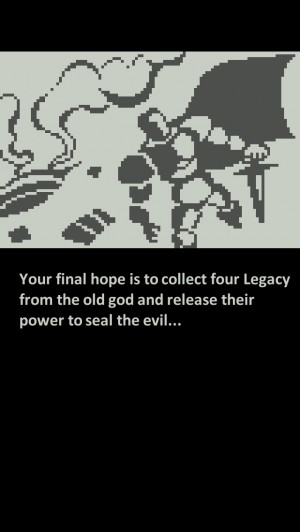 One of the core goals is to build up your camp. Upgrading your camp takes gold and ore, opening up new features like shops, a place to rest your head, or an exchange where you can turn gold into ore or vice-versa. These shops in turn offer items you’ll need to improve your character temporarily and permanently. Well, until you die, anyway. With your character improved, you’re able to head out and gather even more resources, which allow you upgrade your homestead and hero again. Eventually you’ll be strong enough to take on all of the monsters you need to fight to recover the Legacy items. It’s a tricky road to walk, though, because you’re more vulnerable than you might expect at times. A few bad outcomes can have you anxiously tiptoeing your way back to camp, praying the dice favor you for just a couple more rolls. It’s the kind of scenario every roguelike thrives on, and it’s remarkable how well Game Stew has managed to fit that feeling into what is basically fantasy Monopoly.

Ancient Legacy is done up in the usual style of this developer, with sparse use of color and vaguely retro pixel art combined with somewhat eerie sound design to create an unsettling, oppressive atmosphere. There’s virtually no animation of any substance, but there are plenty of illustrations that do a nice job of showing you the various events and inhabitants in this world. The game has support for Game Center leaderboards and achievements, and although there’s quite a bit of IAP, it’s neither essential for success nor consumable, so it doesn’t substantially affect the game by its presence. The game is very clear about what each character offers you, so if you do choose to buy in, you’ll know exactly what you’re getting beforehand.

It’s a quirky little fusion of roguelike and board game that plays well to Game Stew’s strengths as a developer. It’s reasonably tough and there are lots of enjoyable twists to suss out en route to victory. The grind involved in making a winning run can get a bit tiresome, and the game does an awful job of explaining its mechanics. Additionally, while the presentation is undoubtedly stylish, it lacks punch if you’re familiar with the developer’s previous efforts. In terms of gameplay, Ancient Legacy has a distinct, carefully designed feel to it. As something fun and challenging to chew on over the course of a weekend or so, it does its job admirably, if not altogether surprisingly.