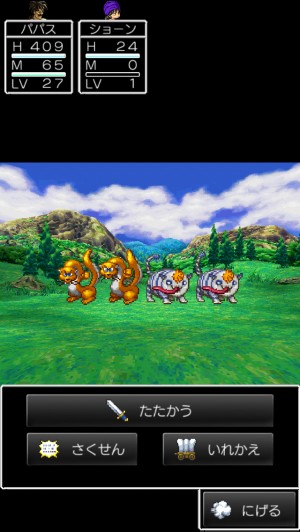 As prophesied by the great sages and Square Enix’s official site, Dragon Quest 5: The Hand Of The Heavenly Bride hit the Japanese App Store yesterday at a price of 1800 yen, or as Square’s been translating that into American dollars lately, $14.99. Just like Dragon Quest 4 ($14.99), this version is a port of the Nintendo DS remake, originally released in Japan in 2008 and elsewhere in 2009. The original game was released in Japan only on Nintendo’s 16-bit Super Famicom in 1992, and its first remake was another Japan-only release, 2004’s PlayStation 2 version.  The Nintendo DS version, although visually resembling Dragon Quest 4‘s remake, has all of the extra content and changes of the PlayStation 2 release, plus an additional option for the choice of the player’s wife.

Dragon Quest 5 is my favorite of the series, mostly owing to its exceptional and unique story. You follow the life of the main character, from birth to childhood, on to young adulthood, and even into parenthood. It’s a bittersweet tale of life and loss told with a measured hand that’s all too rare in the genre. It also introduces a monster-catching mechanic, allowing you to recruit just about any monster in the game to your team, giving you tremendous options for party building. Of course, it’s still a Dragon Quest game, so you’ll find plenty of familiar sights and mechanics. It’s not a series famous for venturing far from its roots in terms of gameplay, after all.

I’ve only had the chance to play a little bit of the game so far, but it appears to be just as Dragon Quest 4 was. The graphics are a bit sharper than the DS version, the music is improved, and the interface is the same one we’ve seen in all of the iOS versions. I’ll have more extensive impressions of the game on Monday, so please look forward to them. As for an English version, Square Enix hasn’t said much, but as there is a pre-existing English script from the Nintendo DS version, I can’t imagine we’ll have to wait more than a few months at most, and with any luck, we’ll have it far sooner than that. As always, we’ll bring you more information as it comes.