Holy heck, does Bean Dreams ($2.99) knock it out of the park. The first Bean’s Quest ($2.99) game from Kumobius was a solid game, with inventive ways to approach platforming on a touchscreen-based device. But after they applied their time-traveling take on Tiny Wings ($1.99) with Time Surfer ($0.99), and gave the challenging arcade game genre an artsy twist with Duet ($2.99), now they return to their original game. And it’s clear that the studio has picked up on a lot of lessons from the past few years, as Bean Dreams is possibly Kumobius’ best game yet, streamlining the original’s concept into a tight and concise experience that they can only further build on and make better. 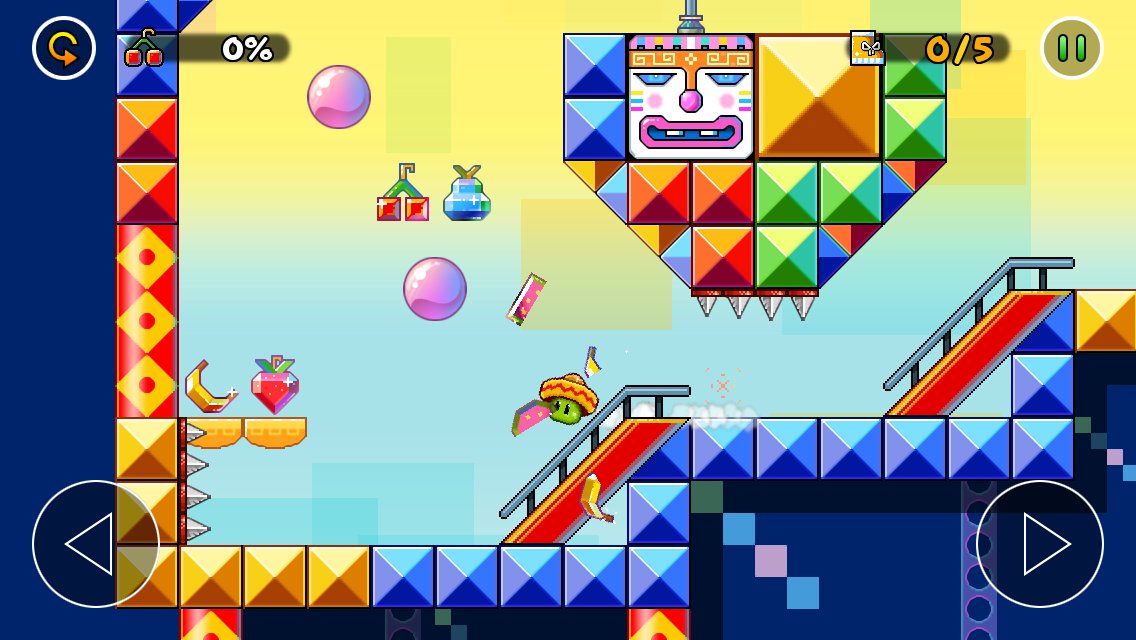 The setup is similar to the original, in that players control Bean, the bouncing beany protagonist, who must constantly bounce his way through the game’s 48 levels, trying to get to the finish line in as few bounces/jumps as possible, while also collecting all the fruit, and the axolotl placed in a precarious position. The game does away with any real semblance of story – the first game had kind of an uncomfortable use of Mexican stereotypes going on in it – and just goes with the idea that Bean’s dreaming of various worlds that he bounces through. Good enough to me! 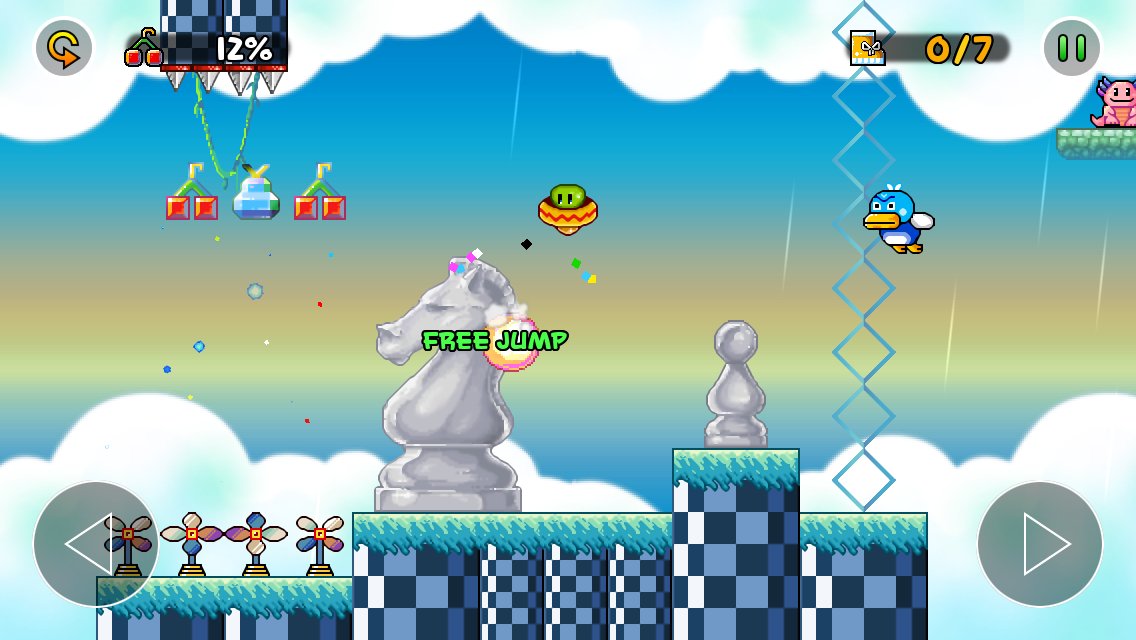 Bean Dreams‘ big difference from the original is that this game goes for streamlined accessibility in its levels. The jumps challenge for the first level in Bean’s Quest was 15 jumps. The number of jumps required to satisfy the requirements in this game are much smaller on a level by level basis. But also, the game’s levels are much less like trying to replicate the level lengths of the 16-bit platformers that this series is clearly inspired by, but instead aims for smaller levels and tighter challenges. What this means is that the game feels so much more accessible. 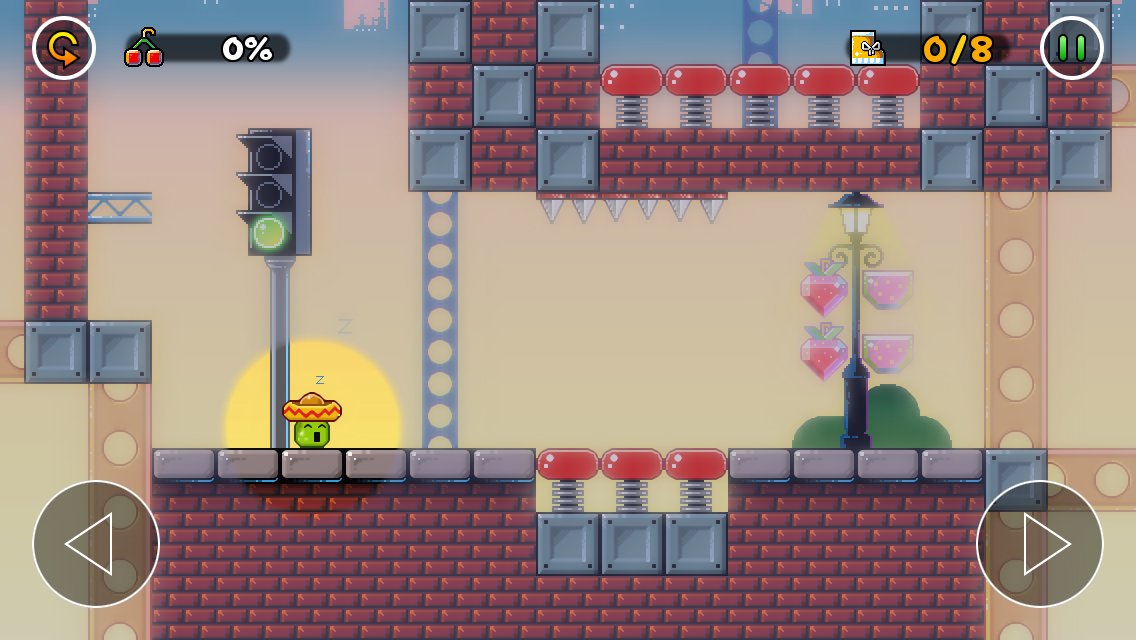 I do think it’s easier to complete some of the challenges, but not to a degree where they’re necessarily easy, just that it’s a lot easier to start over and do a level over and over to complete the goal. I imagine some people will not be huge fans of this and call it dumbing down, but I understand and think that it’s better. One, Kumobius are a much higher-profile developer than they were back when the first Bean’s Quest was made, thanks to Time Surfer and Duet. Two, this allows the game’s innate qualities to shine through when death means losing much less progress in a level than before. Three, this format is so much more friendly for quick pick up and play sessions. It’s a lot easier to get lost in this game because there’s such a small amount of friction to play a level and try it again and again. It’s just a tremendously playable game. 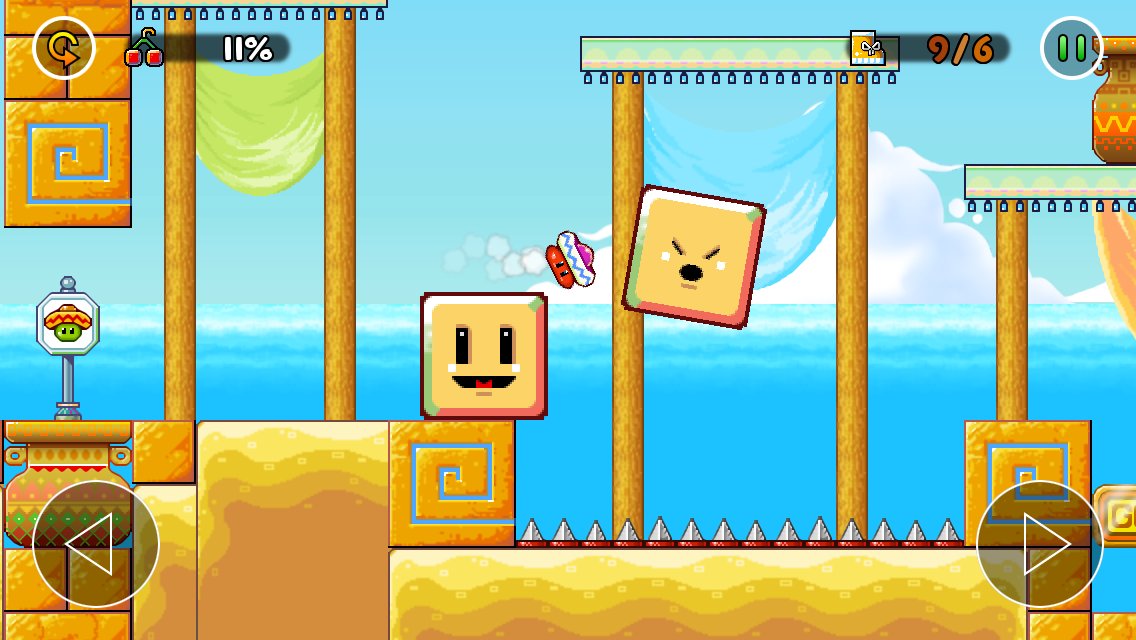 The production values have been ramped up in subtle ways that feel great. The game still runs on devices as far back as the iPhone 3GS, but it looks great on modern devices. The soundtrack is by the same composer from the original, and consists on diverse variations on the same basic motif. The music stops whatever external music is playing, which is fundamentally annoying, but the soundtrack is good enough that I can forgive it. The pixel art looks fantastic on Retina displays. There’s ever-so-subtle visual effects that add nice flourishes. There’s seamless iCloud synchronization. MFi gamepads are supported, even though they’re far from necessary, since this game plays perfectly with just two thumbs. But it’s a feature that’s nice to have, especially since it has a quick restart button. Just the fact that it’s present in the game means a lot, though – the developers were unwilling to leave any stone unturned for Bean Dreams, and it shows. I do wish that restart button – both physical and virtual – had some kind of option to, say, hold it down and restart to the beginning of the level instead of to the checkpoint, in case I mess up on a run. 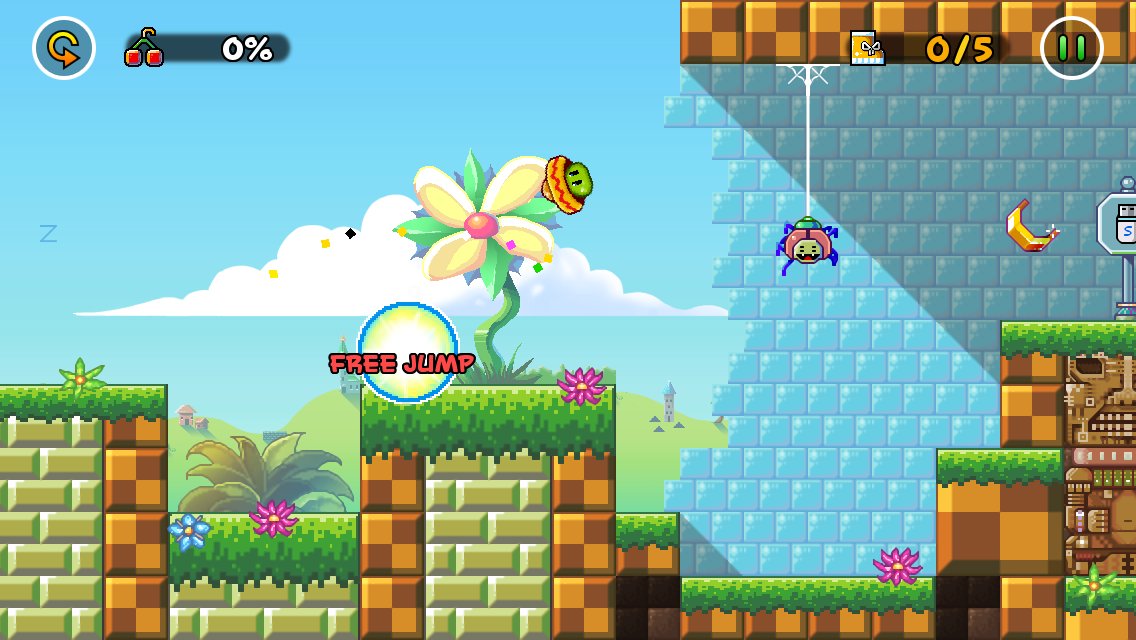 The level design gets inventive, and really plays with beating the game in as few jumps as possible. Some levels involve using a new roll down selected ramps in order to move obstacles and advance without jumping. Tubes get involved, and one level plays with momentum in a way that’s really cool, and not necessarily easy to complete in the minimum one jump! It’s possible to beat at least one level with zero jumps, using bounces off of bubbles and enemy heads.

The game is structured in a quasi-linear way, where there’s level sets that open up based on how many stars have been collected, and any unlocked level can be played at any time. This does encourage going through levels, and collecting all the fruit, the axolotl, and trying to get bronze, silver, and gold on jump counts. It’s possible to open up the final set of levels rather early if enough of a completionist on earlier levels. 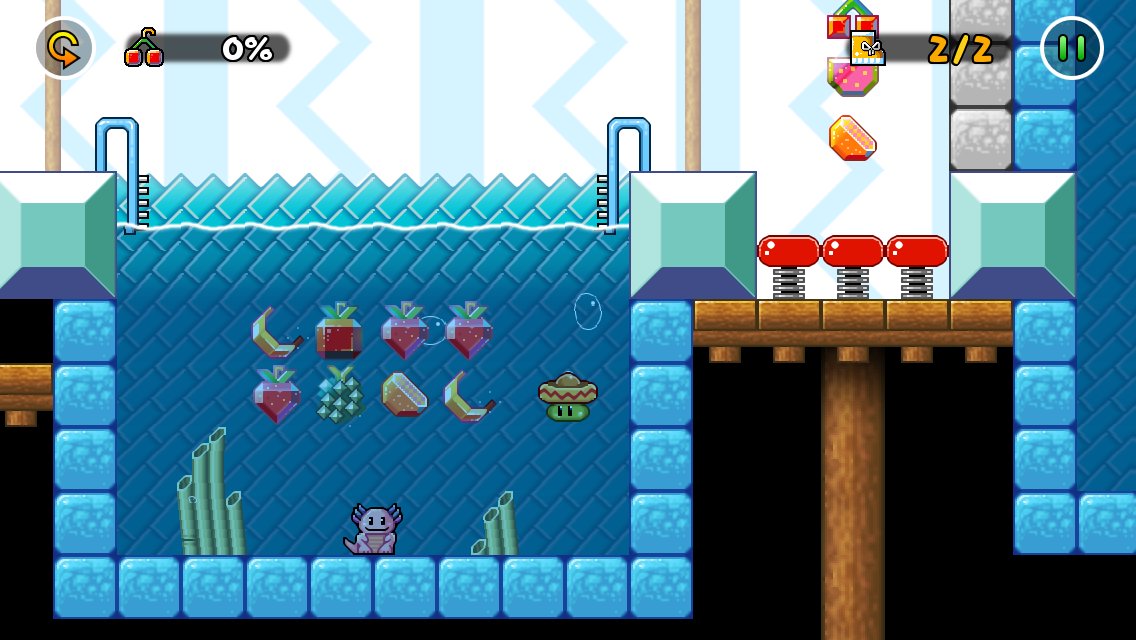 Kumobius is promising more levels, and I’m excited for two reasons: one, they’ve delivered on extra content before, especially with Duet. But the game does some teasing with the chili dash powerup, and features a trailer showing off some of what’s to come. I’m excited – the game that’s already here is top-notch, but with more to come, and featuring new mechanics? Sign me up!

I worry sometimes that I over-praise games, but it feels like iOS gaming is on a fantastic run recently to wind down the year. And Bean Dreams just does so much right – and promises much more – that I have to heap more of my highest praise on this one. This is a fantastic game that other developers of platformers need to take heed of, and that you need to play.