Marvel’s new free to play mobile brawler, which they originally announced at Comic-Con in July and soft-launched in October, is now officially available worldwide. Called Marvel Contest of Champions (Free), the game puts a large cast of Marvel characters, both heroes and villains, at your disposal as you use them to battle in the Contest of Champions. There is a full single-player portion of the game that sees you beating specific quests and unlocking bits of storyline. There’s also online multiplayer, though it’s against other players’ ghost teams and not actually real-time fighting. It’s still fun though, and playing versus lets you win Battle Chips which can be used to enter special Arena events where you can earn high-powered characters and other rewards. Finally there are several daily events to play through which also offer special rewards for winning and unique play parameters.

I’ve actually been playing Marvel Contest of Champions since its soft-launch a couple months back, and honestly I really, really like about 90% of it while the other 10% frustrates the heck out of me. The core fighting mechanics are great, pared down from a full-blown fighting game but still offering strategic and satisfying play. It’s pretty similar to the Injustice (Free) mobile game, focusing on tap and swipe gestures to perform basic attacks and combos, with the larger goal of filling up a special meter to unleash a devastating attack on your opponent. However, Marvel’s game gives you a bit more freedom of movement which adds another layer on top of the simplified fighting and makes the game feel less button-mashy. 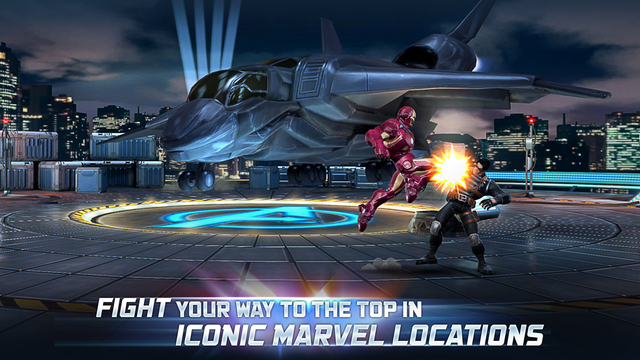 I also love how much content Contest of Champions has. The single-player quests are fun and challenging and it looks like there will be more of them coming in the future. The daily events give you something fun and new to do with your stable of characters every day, and of course there’s always multiplayer which offers infinite replayability. Finally, I want to point out that I love the art style of Contest of Champions. It’s not super realistic, and it’s not super cartoony, it sits right in the middle of the two. The character designs and environments are top-notch, and capture the feeling of an epic battle happening in a comic universe.

So, that 10% that I don’t like? Well, for one the game requires an internet connection. Not a major deal to me, but it will be to some people, and it also messes with the flow of the game when it pauses constantly to reestablish a connection or talk to the server. My bigger issue is with the way you collect and upgrade characters. This is something that’s nice and straightforward in Injustice, but is overly complex in Contest of Champions. You obtain new characters by random through a sort of slot machine mechanic, so if you’re gunning for a particular character, well, good luck. Then there’s the whole upgrading characters part, which given the amount of in-game currencies and items to do so can be incredibly confusing. It’s nice that there’s some depth to the character upgrading, but often I feel I’m spending more time fiddling with my inventory and roster than actually fighting. The whole system can be intimidating and confusing to new users, which may put them off completely.

Anyway, even with those negatives I’ve pointed out, I’m still having a great time with Marvel Contest of Champions. It’s a seriously well-made fighting game that feels appropriate for mobile devices and touchscreens. And, much like Injustice I can see myself playing this in the extreme long term, unlocking and upgrading new characters and playing new events as they come for months and months to come. If you aren’t immediately turned off by typical free to play shenanigans and you like fighting games and/or Marvel, then I highly suggest downloading Marvel Contest of Champions for free and checking it out, and then jumping in to the conversation in our forums.