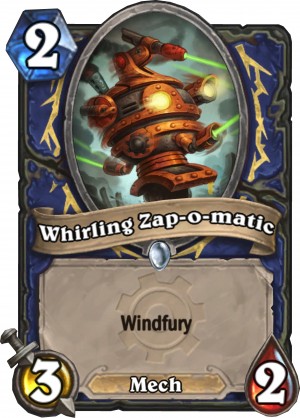 Blizzard has been teasing tons of new cards from the upcoming Hearthstone (Free) expansion Goblins vs Gnomes, which is right on track with Hearthstone Senior Game Designer Ben Brode’s plans he’s mentioned on Twitter. Like most (all?) collectible card games releasing a new set, all of the cards will be spoiled (That’s the term they use in the Magic world, anyway) before the release of Goblins vs Gnomes. The best place I’ve found to keep an eye on all of the cards that have been revealed all over the internet is this page on Hearthpwn, but today we’ve got our own reveal, which I’m sure will be listed there soon enough as well.

It’s the Whirling Zap-o-matic, as seen to the right here and it’s another card from the Mech family. A 3/2 Mech for 2 mana with Windfury, which seems like an unbelievably solid two drop- Particularly if you’ve got other cards in your deck that have any kind of synergy with other Mech cards. For instance, playing the Whirling Zap-o-matic then another card that buffs or otherwise interacts with having Mechs in play the next turn would be particularly sweet.

Goblins vs Gnomes is planned for release in December. Because of the way the App Store works, and the awkwardness that is the holiday iTunes freeze, this most likely means we’ll see the expansion inside the next 2-3 weeks. Of course, Hearthstone is made by Blizzard, so expect the unexpected when it comes to releasing anything.