Viking’s Journey: The Road to Valhalla (Free), formerly titled Lost Viking, exists in an odd place in that the game is physically fun to play, but the actual game itself winds up being a struggle. It’s a puzzle-RPG from the creators of Dungelot ($0.99), with a remarkably slow upgrade system, gameplay that feels like it’s stacking the deck against the player in most every way possible to the point that it delivers far less fun than it should.

And oh is it a shame, because Viking’s Journey just feels great to play. It uses a Threes ($5.99) inspired five-by-five grid, with swiping to move all tiles on the board horizontally or vertically. Swiping everything around feels great, as the controls are responsive, and the tiles move in a way that has some heft, that feels like actually flinging them around the board. It’s a wonderful physical response, and it’s extremely satisfying to pick up and play, even at its most frustrating. 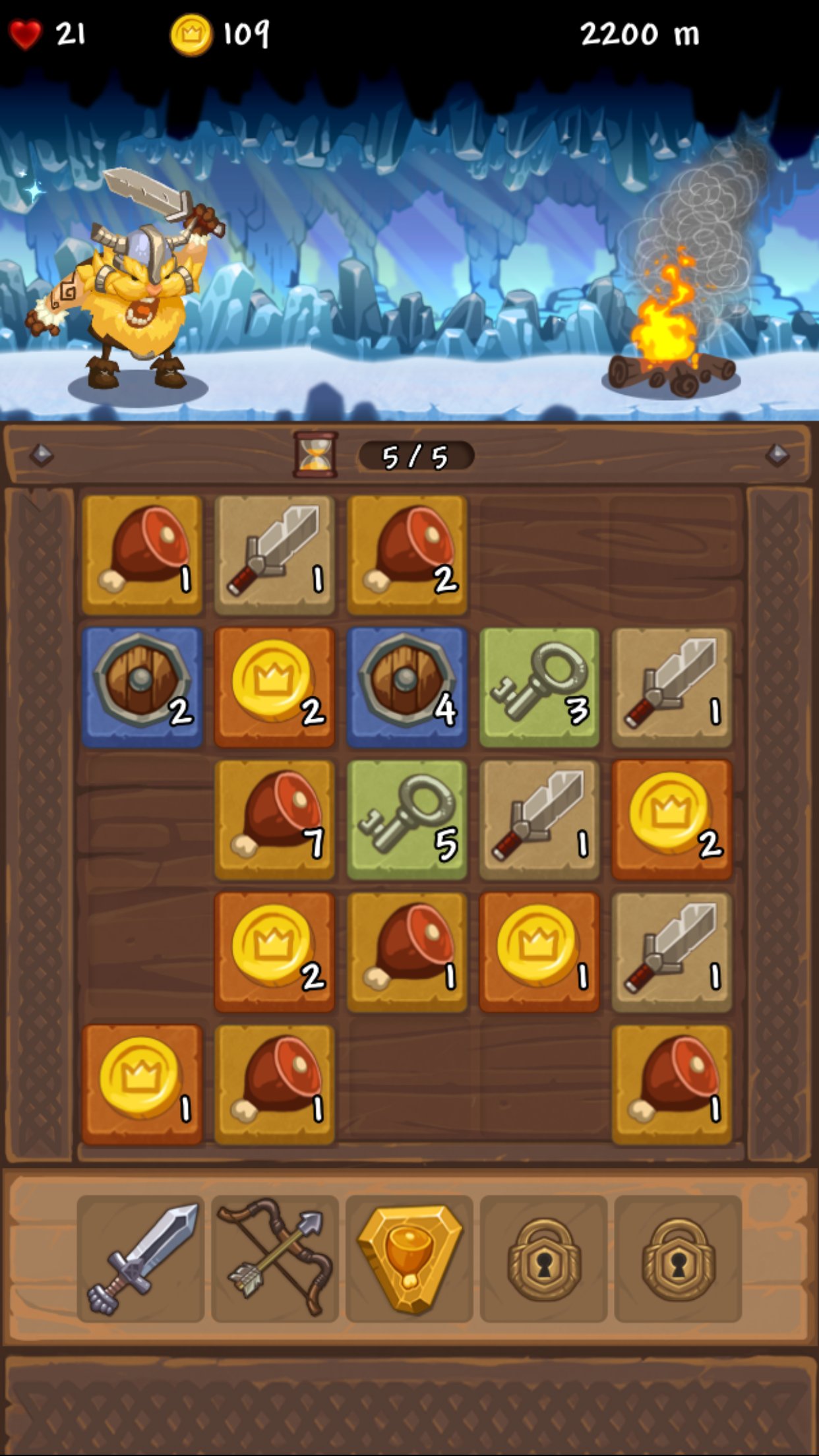 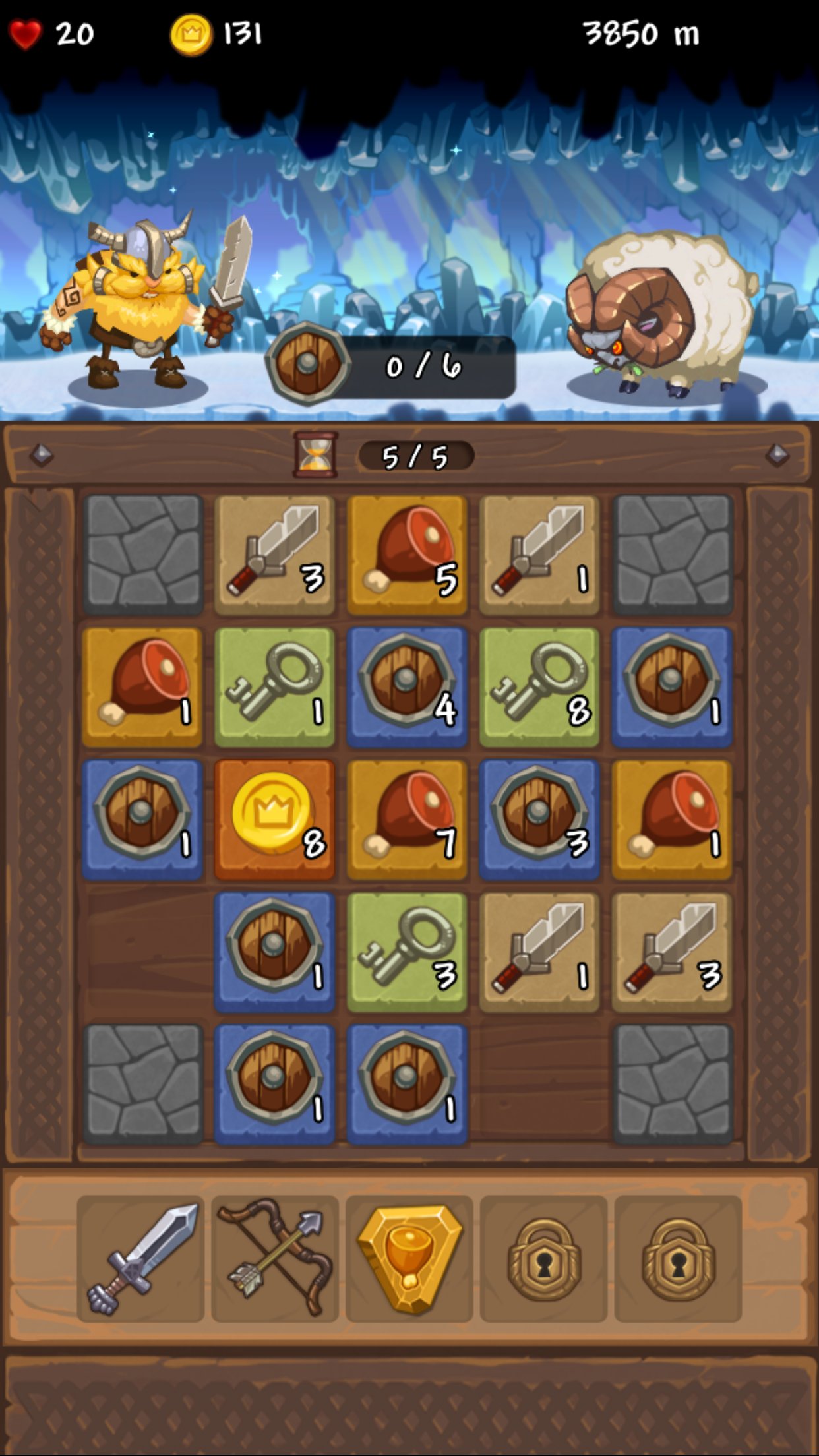 The game is not a match-3, but has different tiles with numbers on them that add up as they are matched up with themselves. Games take place in turns and rounds, with five turns per round. There’s enemies which are damaged by the highest sword tile on the board, rams which require a shield with a certain number to ride (otherwise they obstruct the board), treasure chests which require a certain number to unlock, and fires that give health based on the highest meat tile. As well, there are coin tiles which give money based on the highest tile when an enemy is killed.

It’s a unique system, but its implementation winds up having problems, because it means that getting rid of tiles is extremely difficult. It’s possible to match up to five tiles at once in a row or column, but 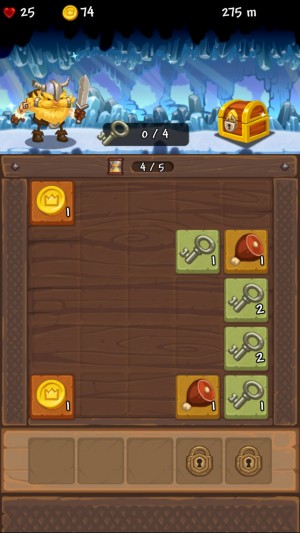 if a tile gets stuck in a diagonal array, or if the tiles randomly added after each turn are in bad spots, it can make the board difficult to manage. Oh, let the board fill up? The punishment is a draconian chunk of HP. Considering that large quantities of items can be lost when the board resets, maybe just losing a turn or a smaller amount of health would be punishment enough?

Part of the reason the board fills up is because combat sequences appear too often, making it difficult to get rid of meat, shields, and keys, if they start to populate the board. Also, the game’s distribution of tiles often puts players in a position where they can’t succeed, like making extremely high demands to unlock a chest than what the game gives. As the game goes on, it would help if tiles with values bigger than one would appear. These numbers increase over time, but it just feels unfair, like playing against a stacked deck.

There is a coins system for buying upgrades to get more and better powerups, and more health, for example. But getting upgrades feels like it’s painfully slow due to the rate of coin earning, like this was a free-to-play game without the ability to buy in-app purchases. As such, even getting things like more health wind up taking a long time. I don’t know if this was meant to be a free-to-play game and the switch to paid without IAP was made at the last moment without considering the balance. That seems likely, because it just feels like too slow of an un-fun grind to get better stats.

Everything just feels tilted against the player, even the random generation of tiles feels mean in the context of everything else about the game. The entire board slides off to one direction rather than just one row of column. And the game makes immense grinding necessary to try and succeed? Throw the players a bone here!

And it’s really a shame that the game has so many structural flaws, because, again, it’s just fun to physically play. I feel like I’ve stuck around a lot longer with this one than the actual quality of the game surrounding it warranted. Development is far from complete – the game’s gotten some tweaks along with the name change, and there’s still a few bugs that need to be cleared up. So things are far from hopeless for Viking’s Journey being a really good game. I’d love to see a future title take another stab at this, perhaps without any sort of upgrade system at all, just being about enjoying the act of swiping to fling around the many tiles. That’s a load of fun, but everything else around it feels severely flawed.

Keep an eye on our forums, though, the developers are participating and I have more faith that this game could be made into something promising than many other flawed games, since there’s the feel of a great game in here somewhere. Red Winter Software just hasn’t quite figured out the structure of that great game quite yet.