Space Age ($2.99) was a game that intrigued me from the moment I heard of it. The Incident (Free) is still a great game (though currently broken on iOS 8!), and last year’s Blackbar ($2.99) from Big Bucket’s Neven Mrgan was a unique story-driven game that I loved. So them making a new game was well overdue, and I was onboard with the idea of a retro-futuristic adventure game. The game is stated as being inspired by point-and-click adventure games from the 1990s, and certainly that comes through. And Space Age is wonderful when it tries to create a world, populated with interesting characters, that I want to explore and see more of. But sometimes Space Age tries to be an action game, and the experience suffers, because it’s just not built to be that. 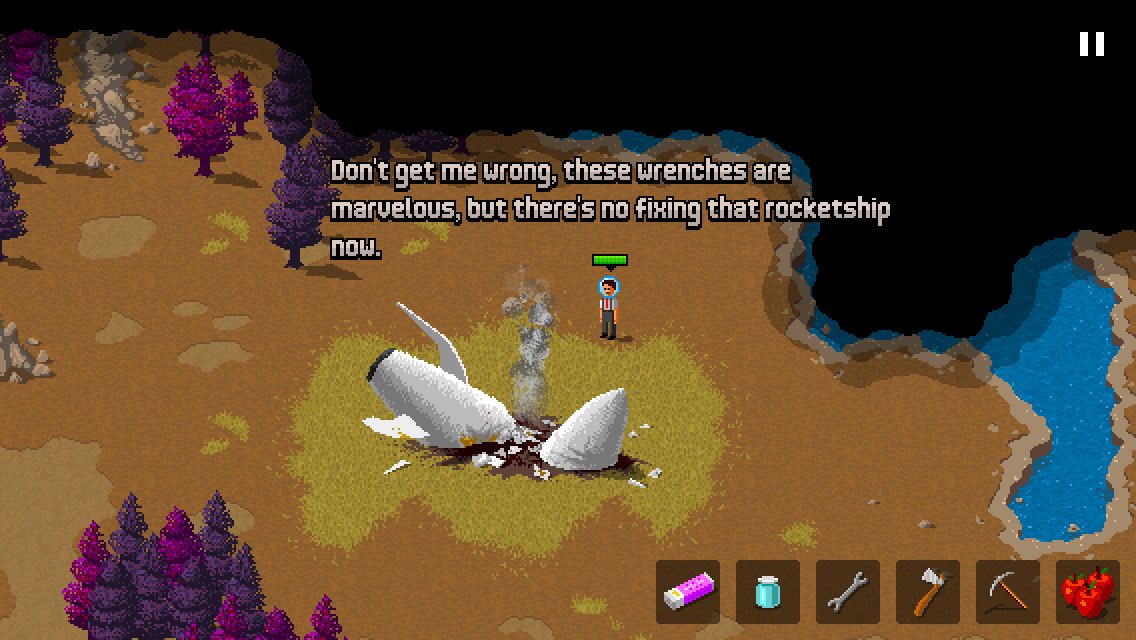 Players control Green Team, composed of a few named characters and some nameless grunts at different times, exploring an alien world, solving puzzles, and occasionally fighting bad aliens, as they try to discover what’s on this planet they’ve landed on, and manage the dangers on it. The main character is the Private and the story mostly revolves around him, but different levels take him out of action, or just make him one part of the larger experience. There’s item-gathering, combining, and usage puzzles like classic point-and-click adventure games, sure. But some scenarios require stealth and trapping enemies, and commanding units to protect centralized bases. There is at the very least a lot of gameplay here in the 14 chapters of Space Age, and the optional achievements for finding secrets or undertaking certain actions help make this more than just a play-once type of game.

Pixel art fans will love Space Age, as the entire game uses quite detailed art, and consistently throughout, so there’s no inconsistencies in the visuals at all. The Incident had fantastic pixel art, so this comes as no surprise. The game is quite colorful, and uses color-coding for who’s speaking, but the options contain colorblind settings for red and green color blindness. 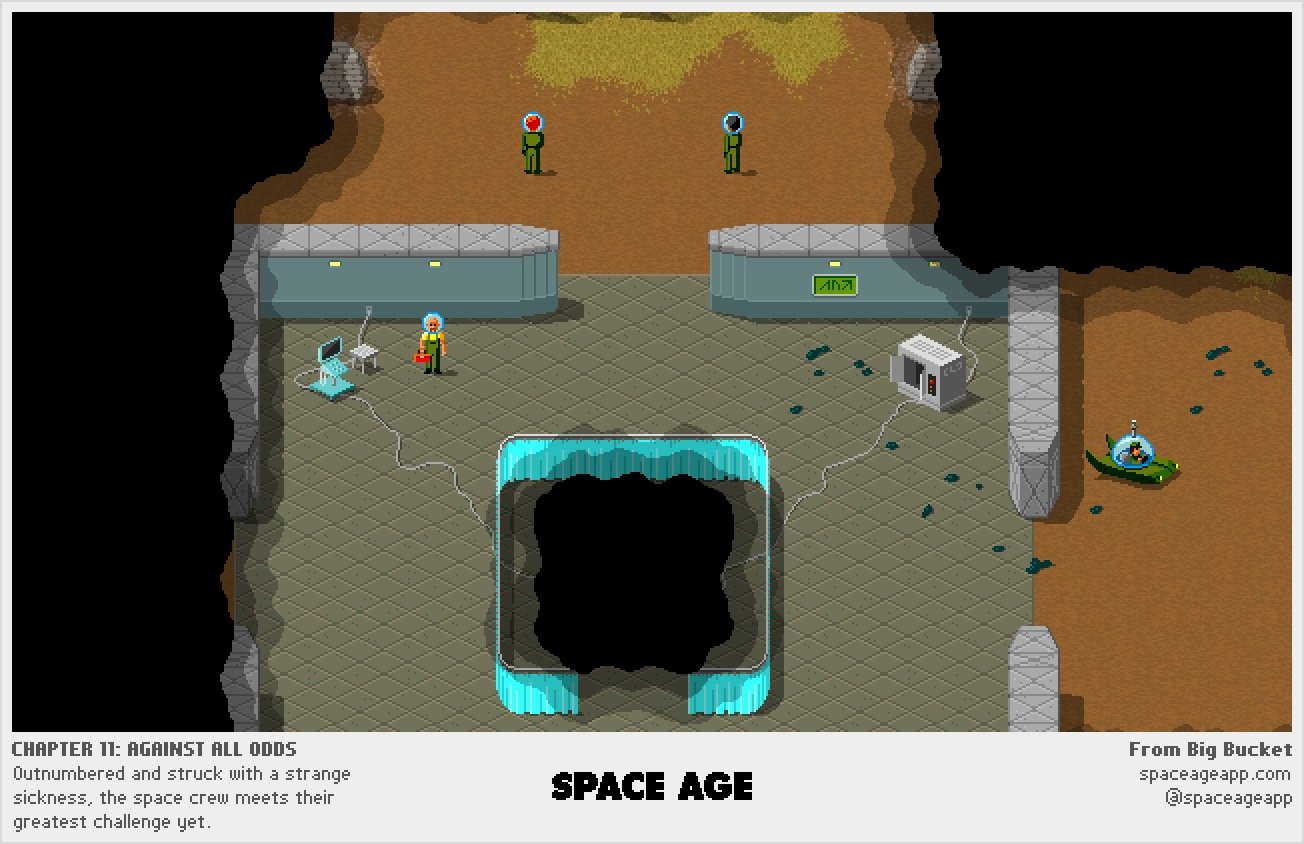 Space Age does something really cool for iPhone 6 Plus owners, in that it uses 1:1 pixels for the 1080p display rather than scaling down from the 2208×1242 resolution it acutally runs at internally. For many games, this won’t make a difference, and even for games that use very chunky pixels, it might not make a noticeable difference, this scaling. But this game looks stunningly crisp on the iPhone 6 Plus. If you have a 6 Plus, I recommend taking a screenshot and paying really close attention to how it looks compared to the game running in motion, there is a noticeable difference. It’s a nice attention-to-detail touch that makes the game really pop – and hope that other games figure out how to do the same trick as Big Bucket because the game really pops out at native resolution.

The soundtrack, by Cabel Sasser, is fantastic as well, using a variety of different sounds for the world. There’s also fantastic positional sound, and hearing things like footsteps helps a lot with stealth. Using headphones comes highly recommended, though that’s certainly an oft-repeated canard. I genuinely recommend it, though! 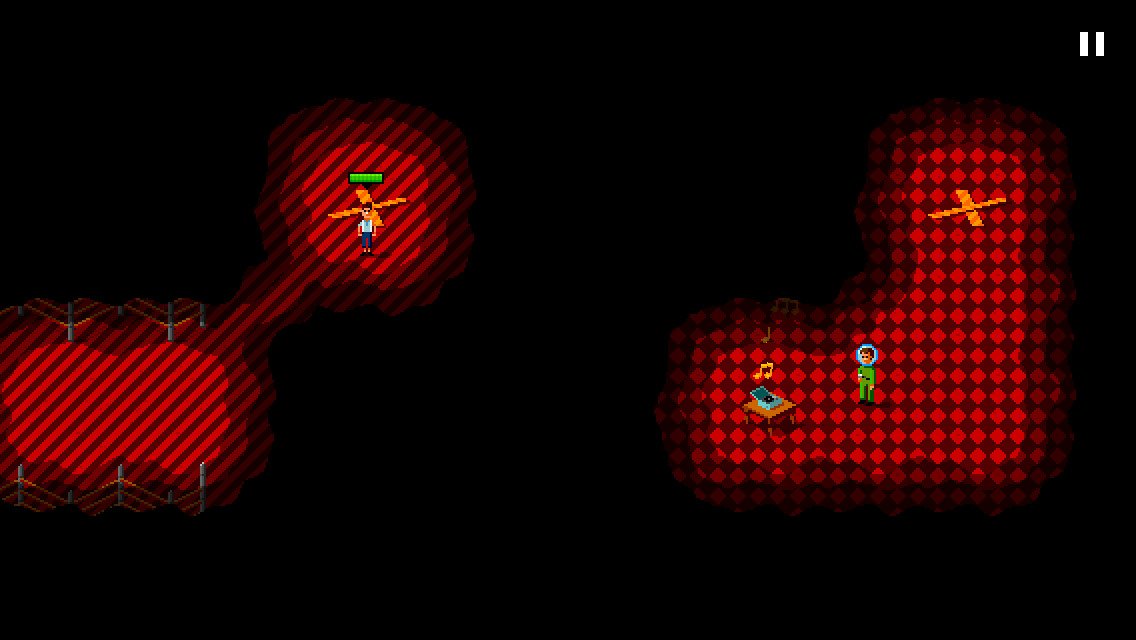 Space Age does really falter whenever timing comes into play. There’s a pathfinding to the character movement that isn’t always ideal and occasionally leads characters to their deaths, either by gunfire in combat, or when trying to navigate death traps. Character movement is also absurdly slow, making at least a few puzzles more difficult than they need to be. One stealth-focused level is a greater pain than it needs to be because of this. The characters are very small, particularly on iPhone, so mis-taps will happen when trying to interact with objects near characters, particularly. A zoom function would be rather appreciated at times, but playing this game on iPad is the better way to go.

Really, I wish that this game eschewed any action whatsoever, because they all just drag the experience down. The best parts of Space Age are when exploring this alien world and finding what out what is going on. It’s the interactions with the characters and the dialogue that doesn’t take things too seriously. It’s the moments of ingeniousness when completing the optional objectives. Fighting the controls, worrying about dying, even having to kill aliens…there’s so many games about killing aliens, but not enough about telling a story about space exploration and interacting with alien lifeforms. When Space Age decides that it’s the latter, it’s wonderful, because I want to discover and explore this gorgeous world. And while even the action moments contain moments of cleverness, trying to escape from enemies or rush through timing traps just never feels right. And so a gorgeous experience gets regularly dragged down to earth.

The highs of Space Age are really high, and I appreciate the ambition and the beauty. But this game is disappointingly flawed; not irredeemably so, but I felt a bit let down after my high expectations.