Being the ever-watchful observer that I am, I’ve noticed a trend in paid puzzle games of late. Perhaps battling against the effervescent, candy-coated, pastel shine of King’s free-to-play offerings, puzzlers from the little guys are turning to the dark side. First, it was Darkin ($0.99), and now, Muertitos ($0.99). Two games make a trend, right? I’m going to go ahead and call that science. While Darkin gave Dungeon Raid ($0.99) a spin with creatures of the night, Muertitos does something both familiar and unusual with its setup. That little bit of innovation combined with its very stylish presentation is enough to help it rise above the dense crowd, though just barely.

Muertitos is a match-3 game where instead of the pieces falling into the field as you clear them, they’re pushed in from any direction by the player. Swiping a piece into the field will also push any obstructing blocks in the same row or column, and if there are no spaces left in that line, you’re out of luck. Generally, you can’t directly interact with any of the pieces once they’re in the play area, though certain special pieces will be sorted in randomly that allow you to clean things up once in a while. You can also earn these special pieces in a brief bonus round after leveling up. As you play, more different types of pieces will be sorted in, making it increasingly difficult to make a match and clear the clutter. 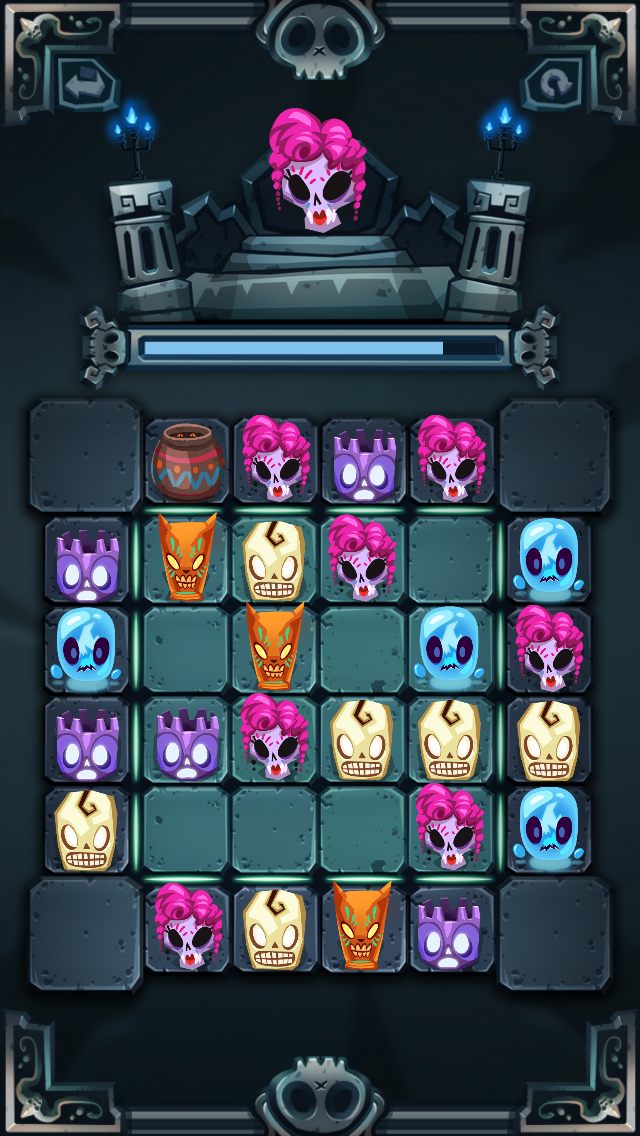 I think the interesting thing here is how the basic setup rides the balance between simplicity and complexity. Not counting any possible items you might have stocked, you’re limited to sixteen potential moves at any one time, a number low enough that it’s easy to take all of your possibilities into account, but high enough that you might still make a poor move anyway. Since the play area is relatively small, with room for just sixteen pieces, you have to plan ahead carefully if you want to last for any reasonable amount of time. It strikes a nice compromise between the considered planning of games like Threes! ($5.99) and the more in-the-moment style of play in typical matching puzzlers.

After making a set number of matches, you’ll gain a level and have the chance to scratch off three squares in a mini-game, with special pieces that you can use at your discretion as the potential prize. These special pieces provide a useful counterweight against the luck factor involved in which piece will appear next. Some of these pieces are more useful than others, with the wild card piece and the reaper 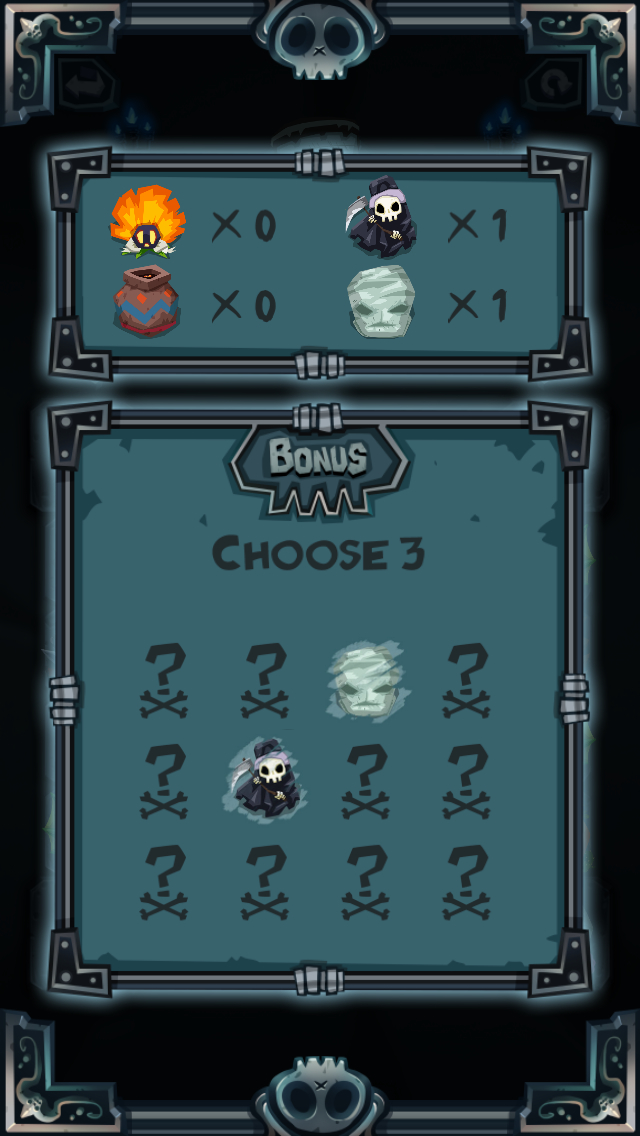 piece that removes one block of your choice having obvious utility. The other special pieces have slightly more situational uses. There’s a jar that you can break at any time by touching, which proves useful if you want to push other pieces around but keep a gap open. There’s also the clayface piece, which will become a random normal piece when you touch it, making it something of a Hail Mary when your back is completely against the wall. I found it wasn’t very helpful most of the time, but it’s better than nothing, I suppose.

My only real problem with Muertitos as a puzzle game is that apart from throwing in new pieces to increase the chances of creating a tangle you can’t get out of, it doesn’t have any other tricks to increase the challenge or depth. It doesn’t take terribly long to get to the point where all the pieces are in play, and from there it’s just a matter of you making a mistake or the game throwing you too many bad pitches. I think that’s a struggle that’s always going to be inherent to this genre when it doesn’t use some sort of mechanism to put pressure on you. It’s not a huge problem if you only mean to pick up and play it to kill time here and there, but at least in my case, I found it was something I got bored with in longer sessions. It depends on what you’re looking for out of your puzzle games.

Less contentious is the game’s excellent presentation. It uses a Dios de la Muerte theme for its visuals, which is rare enough that it’s still quite novel. If, for some reason, you’re not interested in that style, you can also choose a different theme for the pieces that has classic European/Western monsters. The music is somber and moody, fitting the theme of the game well. Muertitos offers a leaderboard through Game Center for its single mode of play, an endless score attack. Some other modes of play would have gone a long way towards helping mix things up, but if you’re only going to have one, Mueritos picked the right one. Considering the game is just a dollar and contains no IAP at all, it’s hard to complain too much.

Muertitos offers an interesting gameplay spin on a very well-worn sub-genre, and when combined with its unique and well-realized theme, it does distinguish the game from the pack a bit. I don’t think it goes quite far enough to really jump out, but if you’re on the lookout for something familiar, yet a little different, in the puzzle category and you’re tired of free-to-play and all of the nuisances that come with it, Muertitos will show you a pretty good time. It’s made a pretty big impact in our forums here at TouchArcade, so make sure to check out the thread to get more impressions.