There’s been a lot of super popular free to play games on the App Store, but the original Candy Crush Saga (Free) completely redefined the meaning of App Store success. The game was huge on Facebook, and the leap to mobile sent the popularity of Candy Crush to a level I’m not even sure the wildest dreams of anyone at King could have imagined. It’s become part of pop culture to the point that the game is even referenced in unrelated TV commercials now, and it’s almost rare to be out in public and not see someone playing the game.

King has been chasing the success of Candy Crush with the release of other titles. Each of these games have done well, and would be an insane, life-changing release for anyone else, but nothing has come close to Candy Crush. So, hey, why not just release another Candy Crush? That’s exactly what King did. 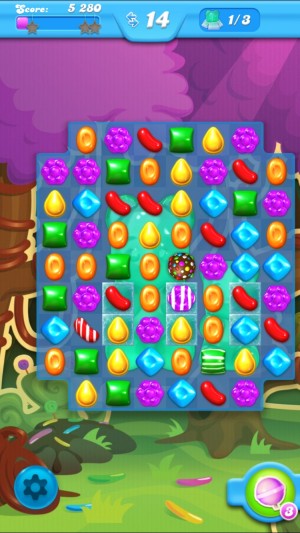 It’s hard to really label what Candy Crush Soda Saga (Free) even is. It’s not really a sequel, as they’ve got no problem slapping a “2" on the end of game titles like Bubble Witch 2 Saga (Free). It’s not really a spin off, as it really isn’t that much different from the original. The best way to look at it just seems to be Soda Saga is simply more Candy Crush. If you’re a loud and proud card carrying member of the “I Hate Candy Crush" Club, Soda Saga probably isn’t going to change that. For everyone else, Candy Crush Soda Saga is a must-have puzzle game.

Gameplay is similar to the original, with minor twists added through new level objectives. You’ll start out dealing with popping soda bottles by matching them with similarly colored candies to get the level of soda to reach the top of the game board. Making matches and clearing candies above the soda causes new candies to fall from the top. Clearing candies in the soda causes new candies to float up from the bottom. Clear a few of those, and the game introduces frosting and gummy bears. In these kind of levels, you need to make matches immediately adjacent to frosting blocks in order to clear it and find where the hidden gummy bears are. From there, you’ll need to make matches on top of said gummy bears to break them free. There’s also a honey mode which you can probably guess by now involves matching candies in different specific places as well. 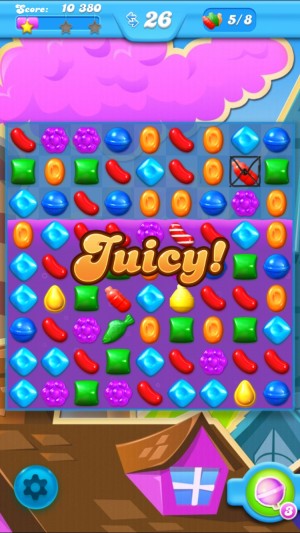 These new block types seem to significantly up the skill cap of the game, as some levels seem straight up designed to require the use of coloring candies. Like its predecessor, doing well in Soda Saga involves intensely analyzing every movement. Sort of like how when you play chess, you’re not just making your move, you’re also looking ahead to multiple moves in the future, every match you make in Soda Saga needs to be building towards forming special candies. Of course, just like the original, if you just want to bang your head against levels and match whatever pops out at you first, that works too.

On the subject of looking for matches, it seems like the match suggestion feature has been significantly improved from the original Candy Crush. Instead of just highlighting any match of three when the game has been idle for a bit, it’ll actively suggest matches that make special candies. I don’t remember Candy Crush doing this much (or ever), but it seems to happen quite often in Soda Saga. It’s hard to say if this is a new thing they implemented because of criticisms that the “suggested match is always bad," or if it’s all in my head.

Soda Saga is monetized in the exact same way as the original Candy Crush, and King games always feel like the “most fair" of all the ultra-popular free to play titles out there. You get five lives, and can get more either by buying them or the requisite Facebook friend pestering. Also just like the original, if you run out of moves on a particular level you can pay to get a few more. Oh, and the candy hammer is still there which allows you to knock out a specific candy without matching it… for a price.

What I love about the way King does free to play is that the way the game is monetized is totally hands off, and while the temptation of whipping out the candy hammer is always there, paying for anything actively seems to make the game less fun. There’s a real feeling of risk and reward as the finite number of lives leads to placing extra importance on playing as well as you can, since failure results in waiting fifteen minutes for a life to recharge. It’s odd how incredibly intense such a seemingly simple puzzle game can be when you’re on a particularly challenging level, with only a few moves left, on your last life.

The life system in these games also serve as a fabulous limiting factor, as Soda Saga (much like Candy Crush) really sinks its hooks into you due to your inability to get bored with the game easily. Instead of just endlessly brute forcing a level for hours, getting frustrated, and never coming back you’ve got a maximum of five failures you need to either stop, pay, or pester your friends. So, you forget about the game for a while, and come back later in the day excited to try again. It’s crazy how well this works. In Candy Crush proper I’ve been stuck on levels for an incredibly long time, but because of the way the game limits you it never feels frustrating because you’re only playing in such short bursts.

Much like Candy Crush, Soda Saga is a marvel of overall refinement. The whole experience has been crafted to just be oddly pleasurable and joyous, which are two words that seem really weird to use to describe a video game. Every graphical element is vibrant and colorful. It’s constantly giving you positive feedback when you’re doing well, with the game continually encouraging you with “Tasty" and similar words. Even the music is amazing. Here’s a game that people play on the subway with the sound muted, and King felt it was appropriate to tap the frickin’ London Symphony Orchestra to do the background music. But, really, that kind of thing just goes to show the incredible amount of thought and detail that goes in to each individual part of the game. I know “highly polished" is an incredibly cliche way to describe a game, but it’s hard to think of a phrase to more aptly describe Soda Saga.

As the case with other King games, once you sign in with Facebook your progress it automatically in sync everywhere. Dealing with managing game saves on iOS games is often totally annoying, particularly if you want to play on multiple devices. It’s annoying they rely on Facebook instead of Game Center, but it seems like a worthy trade off to be able to load the game up quite literally anywhere, even in a web browser or on your iPhone again after deleting then eventually reinstalling the game and be right where you left off. It’s totally seamless, and I wish this sort of thing was standard in all iOS games. That seems to be the dream Apple was trying to sell with iCloud support in games, but I’ve yet to see an iCloud implementation that works as well as King’s usage of Facebook.

Like all things that are popular, it’s inevitable that Candy Crush Soda Saga will have its fair share of very, very vocal detractors. It’s an easy game to dismiss as “just another match three," much like the original. Hell, I even did that with Candy Crush Saga, as the initial out of the proverbial box experience isn’t all that different from any other matching game. If this sounds like you, I seriously suggest giving Soda Saga a fair shake as it’s an incredibly good game. Once you give it a chance to grab you, it won’t let go.