Well, friends, it was bound to happen sooner or later. A couple of the developers of Kemco’s regular RPG releases have been dancing at the knife edge of quality for a while now, and it was only a matter of time before one of them finally lined up all the pieces and created something truly excellent. I always knew it would be you, EXE Create. Asdivine Hearts ($2.99) isn’t just Kemco’s best RPG release to date, it’s one of the better original JRPGs available on mobiles from anyone. It doesn’t transcend the genre in any meaningful ways, but every aspect of it not only shows a desire to change things up a bit, but to make sure all of those ideas actually work well together. If you like JRPGs and want something that isn’t a port of a classic, this game should definitely be on your short list.

The hero of this game is Zack, a smart-aleck swordsman who is (of course!) an orphan. He’s about to leave the orphanage along with his childhood friend Stella, when a routine trip out to the woods to return an injured animal takes them on a very different course. The wildcat they’ve tended to is possessed by the spirit of the Light Deity, and the heavenly one is none too happy about being a cat. They decide to travel together for a while, and things spin out from there. Eventually, they’re joined by two more party members, a mysterious gothic lolita named Uriel, and a stand-offish high priestess named Celine. The broad strokes of each character are pretty cookie-cutter, but as usual, EXE Create and their wonderful localizer find a way to make them feel interesting, funny, and sometimes surprising. The story on the whole is also pretty good, though you shouldn’t expect anything better than the average teen anime fare. There are a few twists along the way that are telegraphed ahead of time if you pay careful attention, but are nevertheless still quite entertaining. 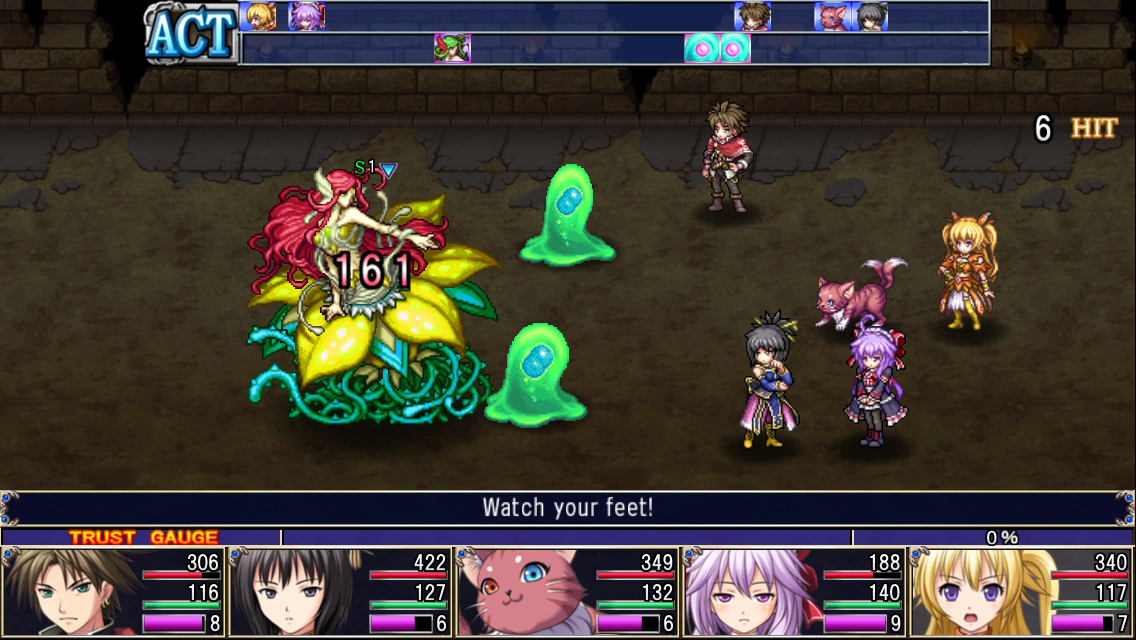 Of course, quality character work and funny, snappy dialogue is developer EXE Create’s usual forte. Even their worst games are quite strong on that front. Asdivine Hearts is among their best in this area, however, rivaling my previous favorites Fanatic Earth ($7.99) and Unlucky Hero (Free). Had the Light Deity not worked out so well, things might be different, as the plot hangs on the character. Luckily, Felix proves to be one of the most enjoyable characters we’ve seen yet from this developer. The heavenly kitty is the star of the show, getting all the best lines and generally poking fun at things enough to keep the plot from getting self-important too quickly. There’s a lot of interesting character development for the chubby cat-god, though, and that’s a rarer thing in this developer’s games. Whoever translates EXE Create’s games does a great job, and they really ran with the ball that was handed to them here, creating a lively, humorous script that reads very naturally. Suffice it to say, if you play JRPGs for fun stories or enjoyable characters, you’re well-covered here.

This particular developer usually settles for turning in a solid, if unexciting, effort on non-story fronts, but they’ve gone the extra mile here, borrowing elements from the work of some of their Kemco stablemates and adding a few of their own. We’ve seen them make use of grids in battles before, but there are now sometimes obstructions on the field, as in Soul of Deva ($4.99), that you have to smash your way through to reach the enemy. Unlike in that game, though, these obstacles never show up on your party’s side of the screen. The basic outline of the battles is the same as in previous EXE Create games, but they aren’t using their new 3D engine here. There’s a turn bar at the top of the screen that shows you roughly when each participant in the battle will take their turn, though speed buffs/debuffs and turn-delaying special moves can change things quickly. This game also uses the formation system seen in a few of their other games, though you can’t change on the fly during battles here, so it’s a bit less useful than in the past. 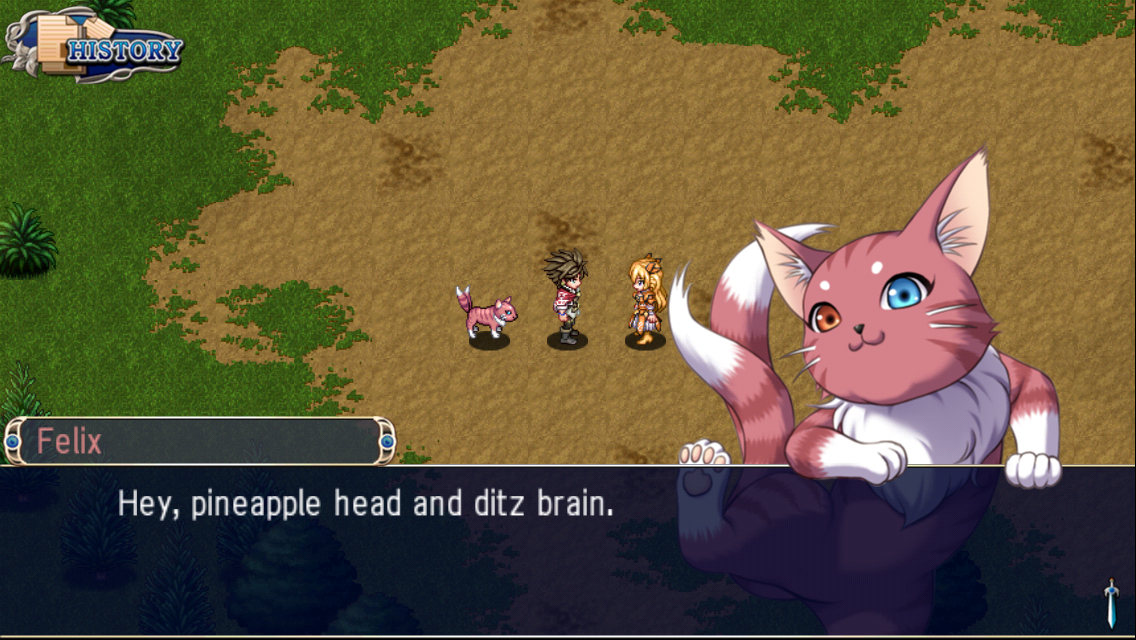 You have your usual regular attacks and magic, and depending on the row you’re in, you’ll deal and take more or less damage. In addition, you have special moves, and in a nice change, they don’t draw from your MP. Instead, you have a special set of points allocated to them which are replenished during the course of battle. This encourages you to cut loose with some of your special moves rather than just hack away with regular attacks to conserve MP for healing, as in many other RPGs. But wait, that’s not all. You also have limit breaks which allow your character to pull off several special moves in a row. Winning lots of battles without running away also fills up your trust meter, and when that’s full, you can unleash a character’s ultimate attack, typically dealing devastating amounts of damage. You would think this might all swing battles too far in your favor, but in a pleasant surprise, Asdivine Hearts actually has some teeth. You can play on four different difficulty settings that are adjustable on the fly, with better rewards being handed out for playing on harder settings. Even the normal difficulty will provide occasional challenges, while anything above that requires you to make use of all your tools on a regular basis. You will sometimes wipe against bosses or even certain packs of regular enemies. Do not be alarmed, this is a good thing.

The character customization is perhaps not quite as granular as some other recent Kemco releases, but you can change things around to a degree. Each character has certain skills and magic that they will learn regardless of anything you do. Beyond that, each character has something called a rubix, a small grid that you can place gems on for various effects. Gems can give you new magic, modify your stats, or give you immunities, among other things, but you can only use as many as your rubix will fit. If you played the somewhat recent Soul Historica ($7.99) from Magitec, this will feel familiar. The gems are all different shapes and sizes, with more powerful ones having awkward shapes and taking up more space on your rubix. Gems can be found as enemy drops or in chests. Furthermore, you can fuse gems together at special shops to create powerful new ones. It’s not a very deep crafting system, but its presence is quite welcome. In the end, you’re more nudging characters in different directions than you are changing them completely, but it’s something. 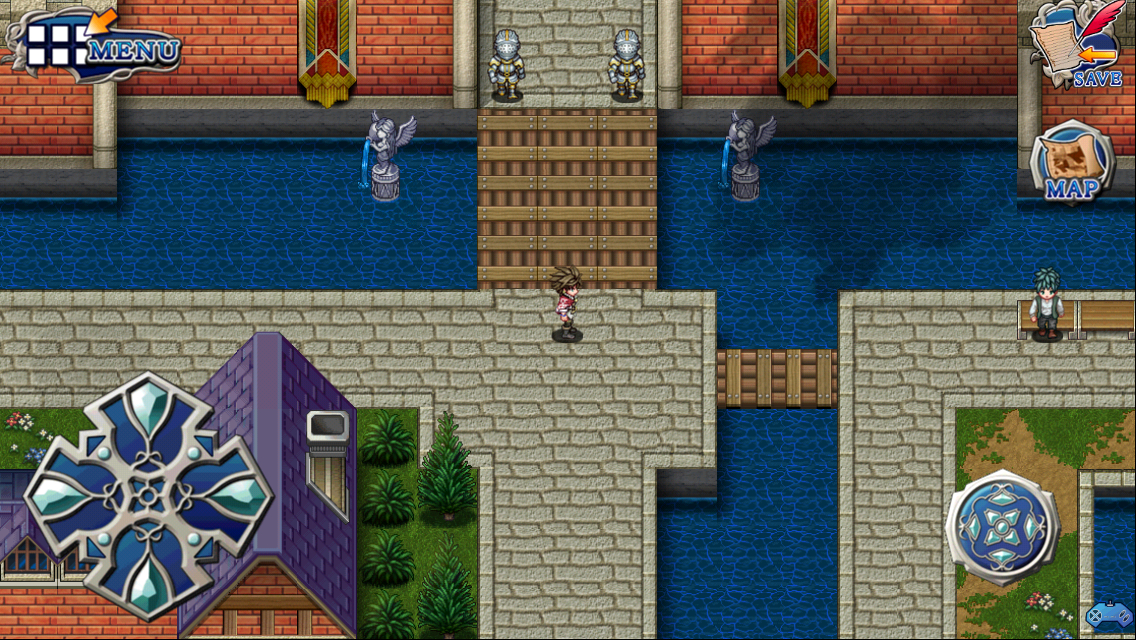 One of the critical elements of a JRPG are the dungeon designs, and Asdivine Hearts holds its own fairly well here. The length and complexity scale well as you go deeper into your quest, and there is always some kind of hidden secret to find if you’re observant. There are lots of interesting things hidden for the curious to find, such as weapons that cause status ailments at a cost of power, rare gems, or even new formations. It pays to explore, and there’s little penalty for doing so, as not only can you restore your HP and MP at a restore point before bosses, you also get topped up when you gain a level. There aren’t many puzzles, and the traps are few, but the layout designs are strong and the challenging combat is enjoyable in and of itself. I also like how there’s usually a shortcut back outside from the boss’s lair, a courtesy more games should offer.

The main quest offers about 20 hours of content, but there are also a bunch of other things to do off the beaten path. There are plenty of side quests, some fossils to collect, and a battle arena where you can win guild coins to trade for valuable items. The usual Kemco IAP setup is implemented here, and unlike recent games where they hand out the premium currency like candy, it’s a lot harder to come by in Asdivine Hearts. There’s a certain kind of object that randomly appears in battles, and if you break it, you have a small chance of earning some premium points. The premium shop only includes a variety of cheat items, so you don’t have to worry about any story or gameplay content like extra dungeons being locked up behind a paywall. 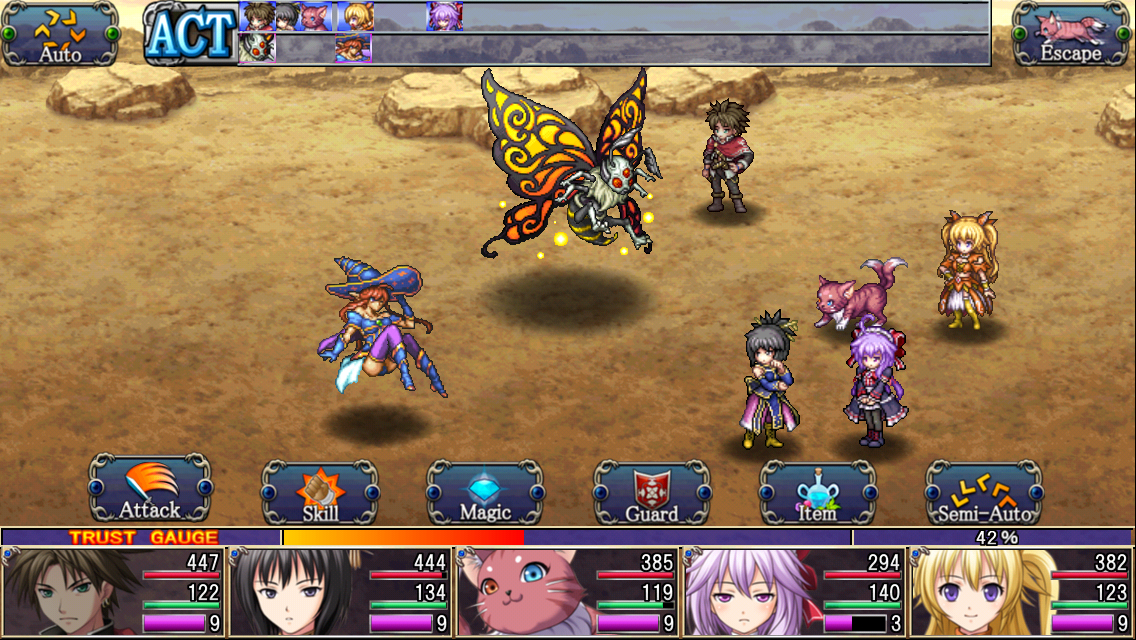 As I mentioned earlier, this game doesn’t feature the 3D graphics seen in some of EXE Create’s recent releases. They’re using their old 2D engine, though it’s clearly a very recent version of it, because the choppy scrolling is minimized and the graphics seem a bit sharper than most of their previous titles. There are lots of recycled sprites and a fairly small list of unique enemy types, but everything is detailed and animated well enough given the scope of the game. The soundtrack is quite limited, as is generally the case with Kemco’s titles, and you can count the number of tracks on one hand. What’s here is decent enough, though it’s unlikely to stick with you once the game is done. I’d say that of all the things that make the publisher’s games feel low-budget, the small music selection in each game sticks out the most these days. I’ve heard most players play with the sound off anyway, though, so maybe I’m just yelling in the wind here.

I think a lot of mobile gamers have a tendency to stockpile this publisher’s games when they go on sale and end up barely playing them, if at all. If that describes you, I can only suggest that if you take one Kemco RPG out of the pile to give a proper chance to, you should make it Asdivine Hearts. This is easily the best RPG to come out of the prolific publisher yet, well-rounded in a way that the meager development time and budgets of their games probably don’t readily accommodate. Ultimately, it’s still sticking fairly close to JRPG conventions, but I could say that about dozens of RPGs that are well-worth playing, so as long as you’re not totally disenfranchised with the genre, I recommend giving this one a go.