Earlier this evening I had the opportunity to chat with Hearthstone’s Senior UI Designer Derek Sakamoto and Producer Yong Woo about the game’s upcoming expansion Goblins vs Gnomes, as well as some general points about the game’s release, successes, and design philosophy.

On A Smooth Transition to iPad

I asked why (at least in my opinion) Hearthstone feels less like a PC game that transitioned to iPad and more of an iPad game that has a PC port. Both Mr. Sakamoto and Mr. Woo focused on the emphasis in creating a transplatform title as well as trying to make a game with as tactile a feel regardless of the platform it was on. For example, small details like the Hearthstone box opening up, the shuffle of cards, and the way you drag a card around all create a tactile experience which goes towards Blizzard’s design philosophy of creating a digital card game that didn’t feel like a digital card game. With this in mind, the touch interface feels very intuitive because it’s already a game that attempts to be a physical title in a digital field of play. 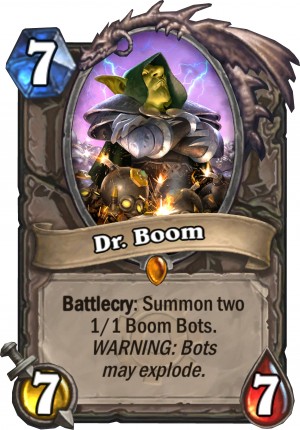 Porting the Game to iPhone

While details were expectedly light on specifics, I did ask about the design challenges of porting the game from tablet to phone. The impression I was left with is that Blizzard plans to do far more than just simply take the iPad UI and shrink it down to size. What this means in regards to actual UI design and how it’ll work is still up in the air, but I’m now very curious to see how it’ going to be implemented. Considering Blizzard’s stance on Hearthstone being completely transplatform, regardless of how it’s done, it’ll have to be done in a way to continue full compatibility with every other platform while making sure it’s fun to play on a phone’s small screen. Details as to when the port is coming are still up in the air, but I heard ‘early next year’ thrown around a few times.

Why Goblins vs Gnomes

After the Curse of Naxxramas adventure, it may have come as a shock to some Hearthstone players that the first full expansion would be based on Goblins vs Gnomes. The response I got centered around the desire to make sure that Hearthstone, at its core, is always about “delightful surprise.” In addition, they wanted to take a step back from the Naxxramas adventure and focus on an expansion without geographic limitations and with a theme that would allow them to basically create some wacky and interesting cards that could add to and change the meta game. By using the Gnome and Goblin races and their penchant for crazy inventions, this allowed the HS team to achieve that intent.

The General Tone and Feel of Cards in Goblins vs Gnomes

In my earlier hands-on I mentioned how each of the new cards had a distinct randomness feel to them in terms of effects. This was confirmed by the folks I talked to as they said that randomness is something that is definitely embraced within Hearthstone and something they wanted to explore further in the Goblins vs Gnomes expansion. Randomness, according to the interviewees, presents a lot of novel situations for expert gamers as it allows them to respond to novel situations never before seen before and adjust their strategy to meet it. The other point they made was more interesting. Randomness also has a tendency to create stories within players about crazy outcomes and games that occurred because some random thing happened that either won or lost the game for them. Sharing stories about the game itself seems to be one of the intentions of Blizzard when it comes to Hearthstone so by adding some wacky effects and randomness, they hope that players find the games more memorable.

I also asked whether, in their opinion, the new cards are focused more on experts or if even novices will be able to enjoy them. Their answer was pretty straightforward: the expansion pack should offer something for all types of skill sets and the intent is to provide new cards for all different play styles. 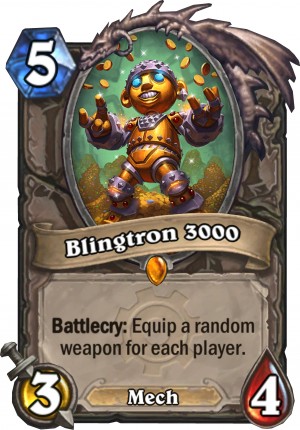 Pricing for the Expansion

Staying true to their free-to-play philosophy, Goblins expansion cards will be sold in separate packs for the same price (in terms of in-game and real-money currency) as the current Expert Card Packs. In addition, dust currently being stockpiled from current cards will be able to create new Goblins cards without anything necessary. Finally, as mentioned before, all the cards in the new expansion will be draftable in Arena without needing to be purchased. Based on my conversations, the goal is to make the expansion as accessible to as many players as possible.

On Modifying the Metagame

One of the more interesting conversations I had with Mr. Sakamoto and Mr. Woo has to do with what they feel is the current state of the meta game in Hearthstone and how they hope to change it with Goblins vs Gnomes. From a gameplay experience, a lot of Hearthstone games these days seem to center around a desire to have a cleared board. An opponent plays a minion, you take care of their minion, they play another, and so on, until minions eventually overpower by clearing a board, allowing easy attack on the hero. With Goblins vs Gnomes, a lot of the new cards have a tendency to have death rattles or other abilities that keep minions on the field in some form or fashion. All of a sudden, it’s not going to be as easy to simply clear the board, and players will have to find new strategies to either deal with those minions, or focus more on dual damage techniques or taking a risk to go agains the hero while leaving minions on the board. It’s certainly an interesting take on the game, and one that I’m looking forward to witnessing from a meta standpoint.

A new board will accompany the expansion, which will have its own interactive features, and I’ve been told that they will be pretty cool to play with. In addition, when Spectator Mode is eventually launched, players will have the option of turning it off in case they don’t want to have their games broadcasted. Finally, any platform will be able to spectate any game, regardless of what platform that game is on. Oh, also, the spare parts all the cards reference? Those are 1 mana cost random buffs, there’s five different ones that do things like give a character stealth, +1 attack, or other similar small buffs.

Hearthstone’s Goblins vs Gnomes expansion will be available across all platforms next month. Meanwhile, check out the rest of our coverage on the title as BlizzCon continues through tomorrow.