I’ve been on a Games Workshop kick lately, and with the relatively recent universalization of Nomad Games’ Talisman($3.99), I couldn’t help but scoop it up. This app has some sky high production quality with a full compliment of features including multiple view modes, full musical scoring and future content updates. I have to admit I caught a serious case of nostalgia seeing the old familiar 3-ringed map and some of my favorite classes again. This port is going to amaze and excite even if you haven’t experienced the physical version of this classic board game.

Talisman, for those of you new to the game, is a board game that encapsulates much of the pen and paper RPG experience with a few shortcuts taken here and there. The goal is to capture THE HELM OF COMMAND located in the center of the board and use it to kill your opponents before they can wrest it from your clutches. Your starting position is determined by the character you play as, but most start along the outer edge region of the board. There are 3 different regions. The middle region is the most difficult to survive in with various ways to lose lives and be kicked out. The middle region is dangerous for about half the game, and the outer region is generally the safe zone in which you can usually thrive even at the start of the game. The difficulty of each region is matched by the potential gains you can acquire if you prove to be strong enough to survive. 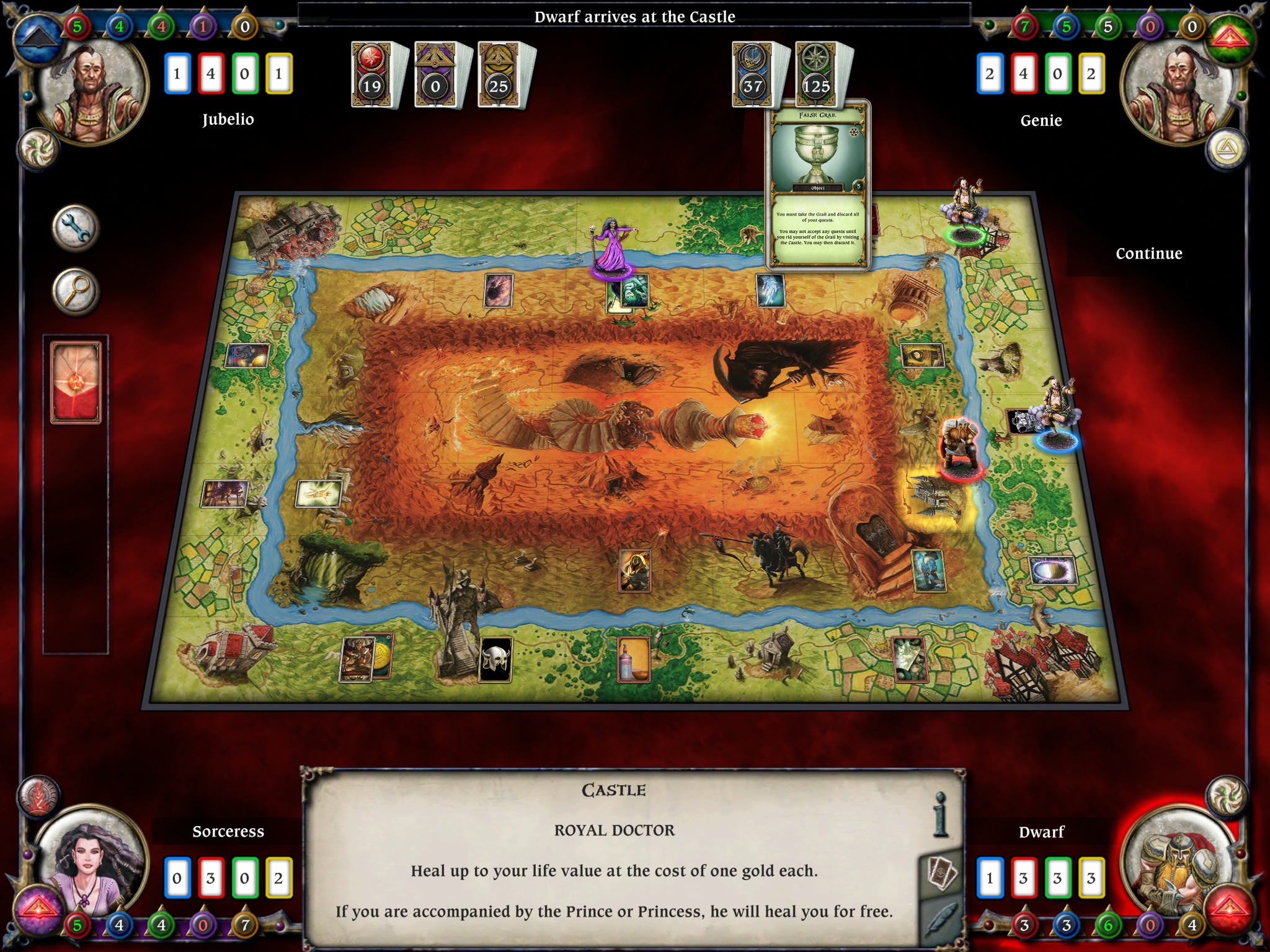 Each space you can land on has special rules. Adventure cards can contain enemies, loot, or events and are usually drawn at least a few times in each round of turns. Other spaces might have preset rolling tables that give or take stats from you based on how well you roll. Losing a turn or even turning into a frog are not out of the question depending on where you might end up. Characters have strength and craft stats that are used to wage physical and magical combat respectively. Characters also have a starting number of lives that basically function like zelda hearts, and fate points that allow you to re-roll unfavorable dice results. Gold is also gathered to purchase various pieces of equipment. Combat is the primary path to increasing your character’s stats, but there are many other events and locations that can be activated to gain(or lose) bonuses.

The game has a number of music loops that will change as long as action continues to move, but if you take a few minutes to weigh your options, expect to hear the same loop of music until you take action. At 241 MB on my iPad, the game has room for a little more audio variety, but its a small gripe for a nice sized game. 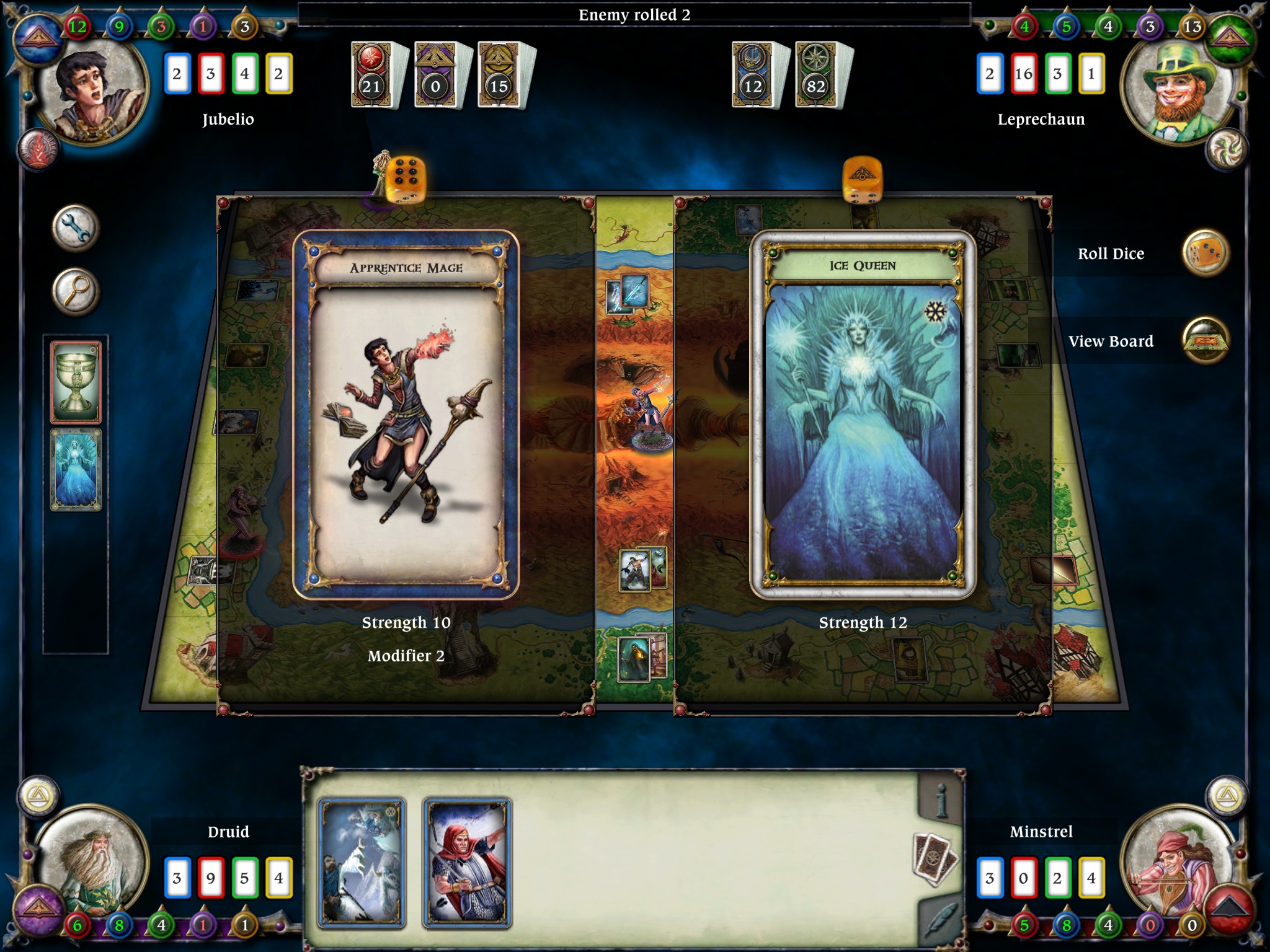 Everything about the game has some aspect of randomness to it. I am not really a fan of this, but there are ways to absorb and deflect the negative stuff that comes your way. Strategy in it’s broadest terms is all about waiting until the odds are in your favor. Now this might mean spending more time in the outer region gaining advantages slowly before trying to take on the challenge of the middle region. It might mean using your class skills to beat some loot out of your opponents directly. It might even mean enlisting the help of a dominated npc enemy to assist you in battle. Each class has specific strengths that will allow you to gain an edge as you level up your stats and become strong enough to reach the Helm of Command.

The worst part of this game, in my opinion, is having to wait quite a while before you can reliably beat common enemies. The amount of time a physical game can go while you wait to get strong is REALLY painful sometimes. There are times that I want to have an aggressive tactical plan, but this is NOT the game to attempt it. Risks usually far outweigh the reward of dangerous options until you can acquire at least a few points of your main combat stat. Games can last between 30 minutes and over an hour, but the app keeps distractions down to a minimum. Strange rules interactions that could be the topic of debate in a live physical game are already resolved on iOS. Although I HAVE met people that derive joy out of debating Games Workshop rules, I think this is a win for most potential players here. AI speed settings are nice in case you want to follow each step of the process or if you just want to burn through turns back to you. Some people might wonder why async play is not included, but it wouldn’t work with counter spell type abilities that require reactions even when it’s not your turn.

As a $6.99 app, you might not expect IAP, but they seem to be pretty decently priced add-ons and extra content, there are no coin doublers or energy bars you need to fear from this game. The different hero classes are especially a lot of fun but I have to say a few of them have an easier time getting strong than others. The Minstrel and Ogre Chieftain types of heroes can enthrall enemies to fight alongside in future fights, this gives them an early game boost most other classes do not have access to.

One improvement I would love to see to this app is the ability to ban certain heroes and give a random choice of 2-4 heroes for each player to choose from. It would be another step to controlling the randomness that, in general, this game excels at. If you haven’t picked this game up, and you can stomach some bad dice results, it’s time you rolled into this one full speed.