Back at the Khans of Tarkir Pro Tour I got a sneak peek of what Wizards was planning with Magic 2015 (Free) which as of today is now available for everyone. In a nutshell, there’s two major improvements. First off, the “premium boosters" that ruffled everyone’s feathers so significantly have since been changed to “battle boosters." All those cards which you previously needed to dip into the IAP bucket to get now are available for free and unlocked by winning multiplayer matches. Additionally, the payment model of the whole game makes far more sense and is modeled after how Magic games used to be- Everything unlockable by playing, or if you don’t want to screw around you can just pay once and get it all instantly.

Here’s a fancy graphic showing how this all works: 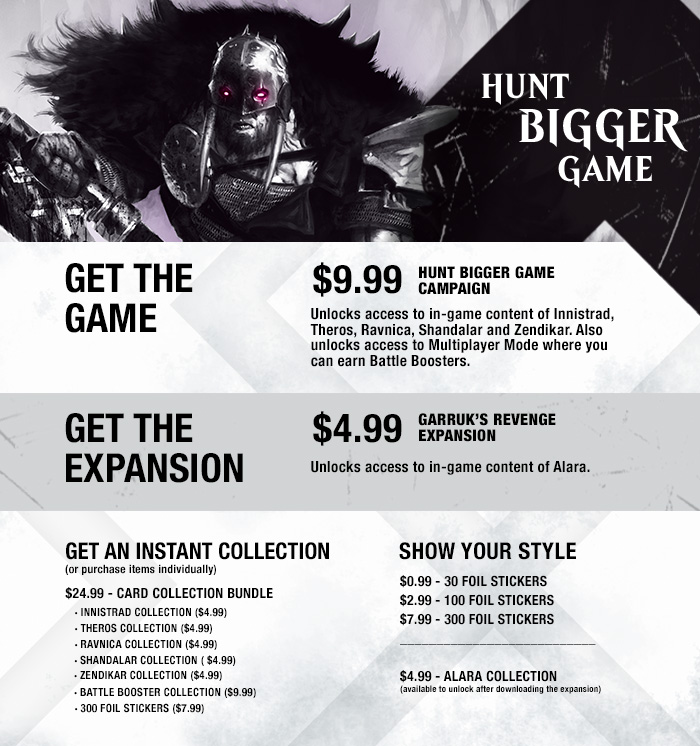 Additionally, the “Garruk’s Revenge" expansion content is now available. It’ll set you back $4.99, and not only comes with its own awesome campaign to play through where you play as Garruk… You’ll also be unlocking cards from the Alara block to use in your deck as you progress through the expansion. Also, of course, if you just want to skip straight to getting all the cards, you can do that too for an additional $4.99.

With how the IAP of the game has been reworked, it now feels more optional than it ever did. Unlocking new cards and adding them to your collection is really fun, and you can do that for the original $9.99 plus the $4.99 for the expansion. Dropping the $24.99 for the original cards and the $4.99 on top of that for the Alara card unlocks feels sort of silly since you’re actively paying to have less reason to play the game.

But, hey, do what you want!