Let’s be frank, video games based on team sports aren’t known for revolutions between updates. That reputation was mostly earned by them being among the first types of games to adopt a yearly release schedule. As it turns out, games take a lot of work to make, and if you’re committed to meeting a particular date every year, there’s only so much you can risk upheaving. Given this long-held tradition in the genre, I almost instinctively wasn’t surprised to find that NHL 2K ($2.99) is, shall we say, a modest step forward from the last hockey game 2K released on iOS. Shaking away that initial gut reaction, I then remember that this isn’t a yearly update, and it has in fact been over four years since NHL 2K11, and in that context, it’s almost embarrassing how little has been done here. If you’re looking for a decent hockey game and you don’t have NHL 2K11, it’s easy enough to recommend NHL 2K. It’s competent, and there’s honestly little competition even across the entire handheld spectrum. If you do have 2K11, the question of whether it’s worth it gets a bit trickier.

Everything that was in NHL 2K11 makes a return here. There are tons of gameplay options you can mess around with to fit the rules to your liking, and a variety of modes to dig into. You can play a quick game, run a full season, play an outdoors Winter Classic game, do a shootout, or just mess around in a free skate mode to get the hang of the controls. Speaking of the controls, there are now more options, with the original virtual button setup returning along with poorly-conceived one-finger touch controls and MFi controller support. Obviously, the controller is the best way to go, but I found the virtual buttons to do the job pretty well, too. The touch controls are a great idea in principle, but in practice they’re nearly unbearable. The controller support is one of the biggest updates to the game, actually, which I think says something. 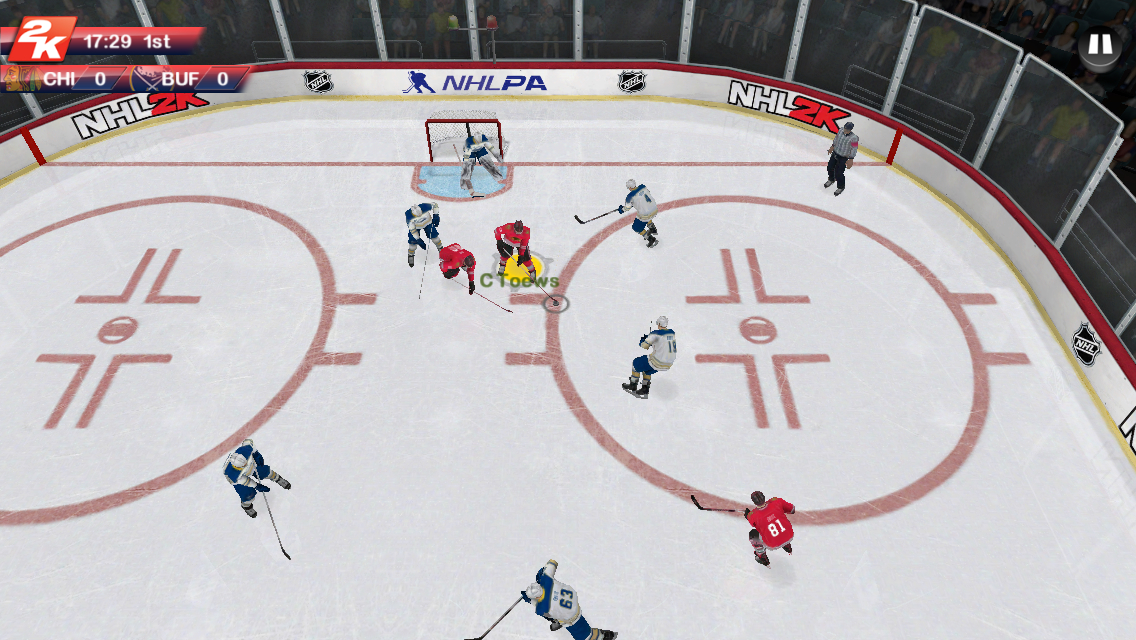 The other big addition is the “My Career" mode which has you create your own player and use him, and only him, throughout a season. You can choose from any of the positions on the ice except goalkeeper, because goalies are unfeeling robots who have neither mercy nor love in their cold, metallic hearts. Based on the position and play style you choose, your character will be assigned starting stats. Simply choose the team you want to play for and you’re off. Of course, since you’re a rookie, you’re going to be buried on one of the lower lines and will only get to play a few minutes of each game. You can skip through the parts where your guy isn’t on the ice at the touch of a button, so that’s not as bad as it sounds. When you do take to the ice, you’ll want to make the most of things. Every action you perform, good or bad, is going to affect your stats in some way after the game. Generally, you’ll move forward, but mistakes will cost you. Once the game is over, all the bonuses are tallied up, you gain experience, and you can even put an extra point into your stats if you did well enough. Keep working hard and you might get moved up to a busier line after a while.

I prefer controlling the whole team, but as tacked-on game modes go, “My Career" is pretty fun. It’s enjoyable watching your player progress from being a low-rung third- or fourth-liner who plays a couple of minutes in a game to being a star player who’s on more than he’s off. Since virtually all games will be shorter than those in the regular modes of play, it’s a nice mode to chew on when you don’t quite have enough time for a full game but still want a bit of hockey action. It’s worth pointing out that this mode isn’t nearly as fleshed out as its cousin over in NBA 2K15 ($7.99). There are no contracts to sign or practices to participate in, or anything related to the business end of the sport. Personally, I don’t mind it all that much, since the NHL tends to have a bit less of a public focus on that stuff than the NBA, but it would be nice if features were consistent across games with the 2K Sports label. Without that business angle, it’s a bit harder to make an argument for playing this mode over just running a proper full season, however. 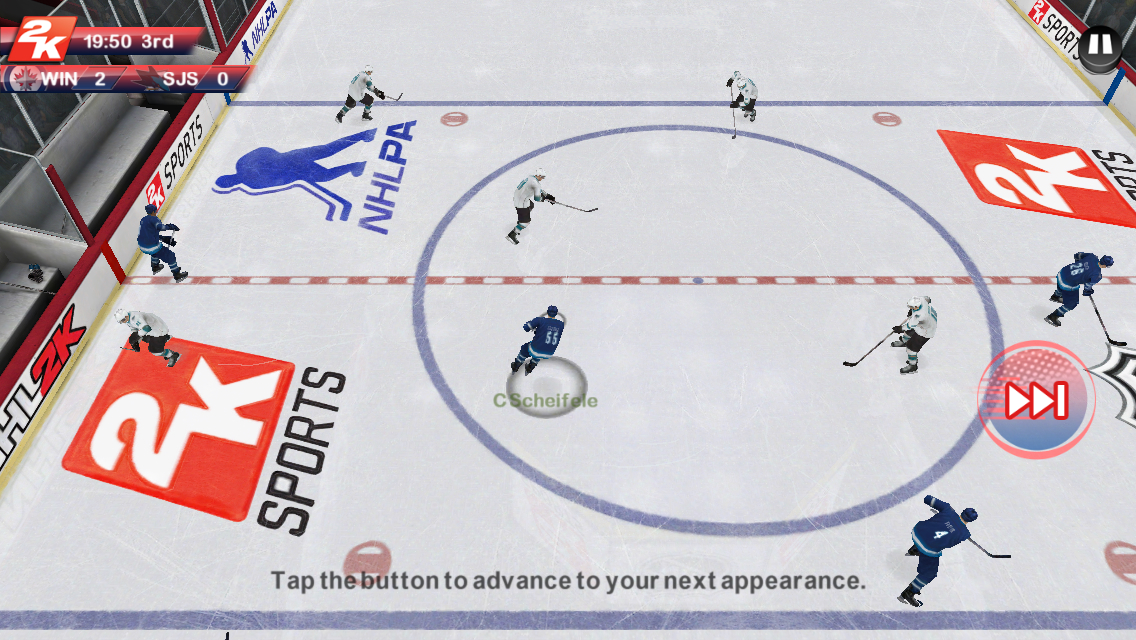 Moving down the list, we’ve also got a new mini-rink mode. In this mode, you play three-on-three, with a goalkeeper and two other players of your choice, in a compact rink. I suppose this is meant to simulate the great arcade hockey games of the past, but it didn’t do a whole lot for me. It certainly led to higher scores in games, because man alive, the goalies in this game are terrible, but that’s not exactly a plus in my books. There’s also a new multiplayer mode, but don’t get too excited. It’s just a turn-based shootout mode through Game Center. It’s asynchronous, so you take your shot, then your friend takes theirs, and so on. It’s an interesting idea, I suppose, but video game shootouts aren’t all that fun to begin with, and without manual goalie control, it seems a bit pointless.

The other additions are all on the technical side of things. The game supports iCloud saves and larger screen sizes, though there are apparently issues with the iPhone 6, so be careful until an update hits if you’re using one. Rosters are now updated live, so that saves you a bit of work if you want to keep your teams up to date. The graphics have been slightly improved, but the game doesn’t look a whole lot better than the original in spite of the ridiculous hardware power boost in the intervening years. The crowds especially stand out, looking like something out of a SEGA Saturn hockey game. That said, the game runs smoothly, and if the cost of that is having paper cut-out crowds, that’s a compromise I’m willing to make. Like the original, there isn’t any commentary here, and the sound design is overall fairly weak, though I’ve long felt that was an issue with 2K’s hockey games even on consoles. There’s a certain crispness missing from the sound effects that hurts the authenticity somewhat. As for music, there are a couple of classic organ tunes, along with some dreadful original stuff. 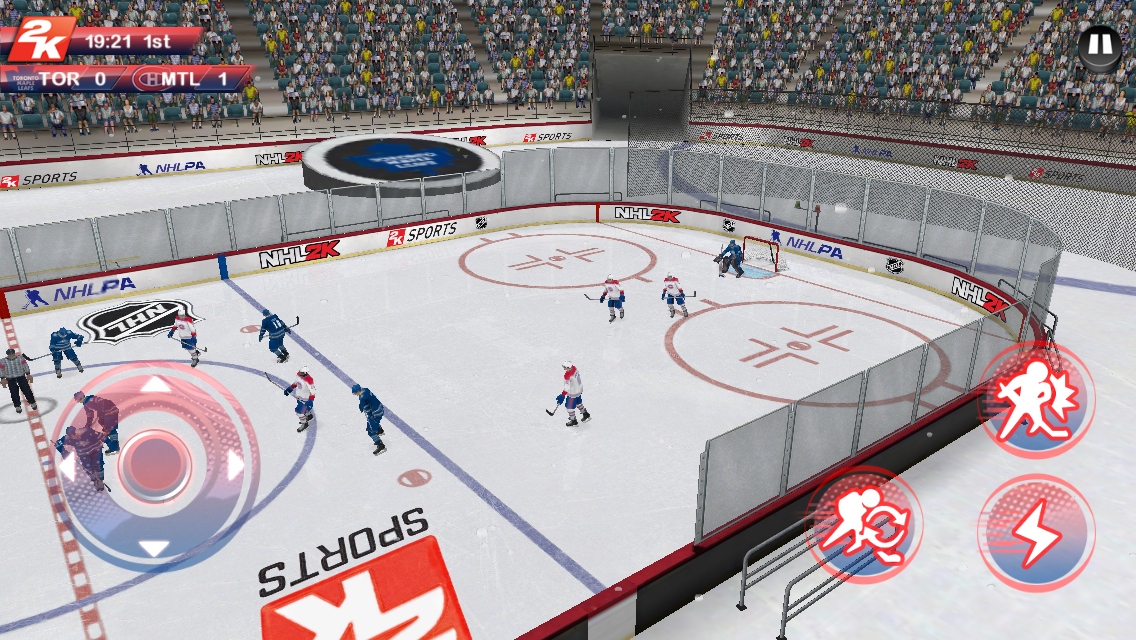 Setting aside the discussion of its seeming lack of ambition, it’s worth pointing out that NHL 2K is still a really good game of hockey. For whatever reason, hockey games have been few and far between on handheld gaming devices, even the sports-heavy PSP. While NHL 2K isn’t any better than the console NHL 2K games of 10 years ago, and in many ways comes up short, it’s still the best game of portable hockey around. I’d definitely recommend it to any hockey fan, because even if you bought NHL 2K11, throwing another $7.99 in after four years to get a few new features and ensure continued updates isn’t the worst deal. I just wish there was some reason or desire on 2K’s end to really go for it and make this series all it could be. Where are the national teams? How about alternate jerseys? Why can’t I create players outside of “My Career"? Why is there no proper multiplayer? These aren’t things I need to enjoy a hockey game, but the NHL 2K brand built itself on going above and beyond when it came to these things that EA Sports wasn’t always paying attention to. It’s a bit frustrating to see that, after finally getting a chance to take another go at it, it feels like the bare minimum has been done.

It’s a good old hockey game, it’s the best game on iOS you can name. But the best game I could name is not this good old hockey game. NHL 2K11 was in bad need of a refresh, and NHL 2K does just that, but only barely, and the lack of a year in the title tells me we’re going to have to be happy with this one for a while. At the very least, it’s a relatively full-featured hockey game with no IAPs or any monetization shenanigans selling for an up-front price. Given the lack of competition, hockey fans looking for a mobile fix have little choice but to skate up for this one, and the core gameplay makes it more than worth your time and money. Still, I’d love to see less second period slacking and more third period hustle from these boys in the future.