If you asked me a couple of months ago to make a list of game types that were highly unlikely to ever be realized in a satisfying way on a touchscreen, I can guarantee that stylish action games would be on the short list. The sub-genre launched when wunderkind director Hideki Kamiya sat down to make another Resident Evil game, decided that it would be more fun if every attack felt as good as doing a headshot with a shotgun, and ended up creating Devil May Cry. One game does not a sub-genre make, but once Tomonobu Itagaki created his masterpiece re-imagining of Ninja Gaiden, we were off to the races. It’s not the most prolific genre, probably because it’s so hard to do right, but it’s seen its share of hits including the mainstream-friendly God of War series, the campy and cool Bayonetta, and the amazing parry-focused Metal Gear Rising: Revengeance. These games are usually characterized by their highly-technical, deep combat, where players are graded according to how well they can dance to the game’s beat. This usually involves a lot of different buttons, and we all know how well that usually works out on a touchscreen. 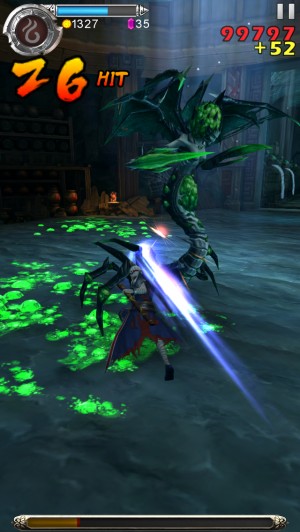 Of course, had I thought carefully about it, I might have remembered the time when one of the masters of the genre made an appearance on a system that used touch controls. Ninja Gaiden: Dragon Sword, released in 2008 for the Nintendo DS, was controlled almost entirely with touchscreen gestures, and was even played in the DS’s rarely-used portrait orientation. It wasn’t a big hit, but it did a very respectable job of translating the incredible action of Ninja Gaiden to a pocket device. Well, I may have forgotten about it, but developer Yushi Digital Entertainment clearly didn’t, because their game Ghost Blade ($0.99) is clearly borrowing more than a few of its tricks, to marvelous effect. It’s seven stages of sublime wall-to-wall melee action, with unexpectedly great controls and a combat system that runs deeper than anything I’ve played on mobiles before.

You take the role of a warrior named Black who is fighting zombies and other supernatural creatures that have attacked a village for extremely unclear reasons. This game has a really bizarre localization, making it very difficult to follow the plot. I’m not even sure whose dark soul I should be filling with light. Well, it’s not like this genre has ever gotten by on storytelling, God Of War aside. The important thing is that Black has a sword and likes to kill monsters with it. He has a friend named White who likes to show up for battle in less-than-protective clothing, but she’s not around most of the time, so the burden falls on you to clear out the demon infestation. You’ll travel through a variety of locations, including temples, villages, and castles, stopping frequently to clear out groups of enemies that attack you. 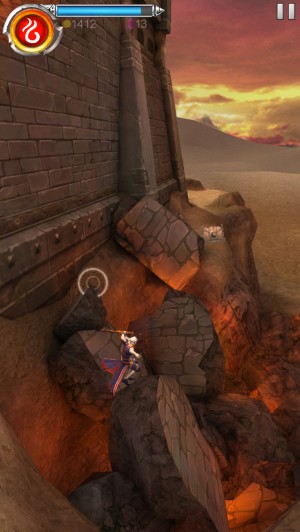 Although the game borrows certain specific attacks, gestures, and overall style of stage progression from Ninja Gaiden, the combat system is actually more like Devil May Cry‘s in that the best defense is a strong offense. Black can’t block, but he can dodge like a champ, and if you time it right, you can turn an enemy’s attack around on them quite viciously. He has Ryu Hayabusa’s Flying Swallow, shuriken, and magic spells, Dante’s Stinger and launcher attacks, and even a few tricks from Kratos’s repertoire.  In short, he is a fighting machine, and in the early parts of the game, you might feel a little bored by how easily the enemies go down. Enjoy those moments. The game spends most of its first stage slowly teaching you the ropes, giving you moves one at a time and allowing you to practice them. Once you reach the boss of that stage, it takes the kid gloves off a little bit, and if your strategy hasn’t evolved past slashing wildly at the bad guys, this is probably where your adventure will end.

Ghost Blade begins in earnest from the second stage, when all of your main moves have been unlocked and the game starts throwing more interesting and deadly combinations of enemies at you. The game starts to demand that you split your attention and try to manage the whole battlefield, something that only occasionally becomes a problem when certain enemy types venture off-camera. You’ll have, for example, regular melee attackers in your face, while flying eyeballs lob shots at you from a distance and witches cast powerful magic on the ground below you. The answer here might be to parry a melee attacker, launch a few into the air in the ensuring combo, give them a few slashes while they’re up there, toss a few shuriken or shoot an arrow or two at the flying eyeball to put it down, then quickly roll as you hit the ground to avoid the lightning strike from the witch. It might also be something entirely different. Ghost Blade gives you a ton of great tools to use in battle, so how you approach each situation is going to depend heavily on your own personal style. This is one of the hallmarks of a quality game in this genre. 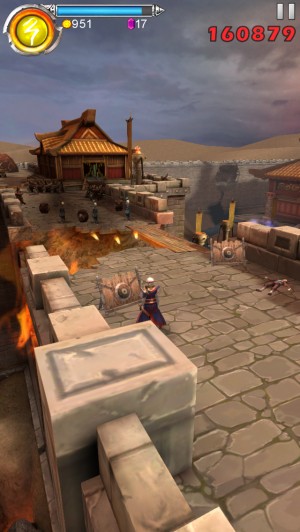 The intuitive controls are the key to all of this working as well as it does. Swiping horizontally across an enemy launches a basic attack, with a variety of attacks possible depending on how many enemies there are and where they are in relation to your character. Swiping up will make you jump, and if you’ve already started a combo on an enemy, you’ll launch them as you ascend. Once you’re up in the air, you can swipe horizontally across an enemy to attack them in the air, swipe in empty space to do a downward attack like Ninja Gaiden‘s Flying Swallow, or swipe downward to crash to the ground with an area attack. On the ground, you can swipe downward to the left, right, front, or back or your character to dodge in that direction, and if you time this properly with the enemy’s attack, you’ll be able to parry and launch a huge counterattack. You also have access to magic and an ultra attack, with magic performed by touching an icon and drawing a symbol, and the ultra attack done by swiping down on the same icon. You can move your character using a virtual stick, though Black does a good job of closing distances himself when you swipe on an enemy. Finally, you can use your ranged attack by simply tapping on the target.

I know that looks complicated written out in text, but in practice, it’s easy to get the hang of basic combat. Learning crowd control, how to evade, and parry timing takes some practice, but that’s as it should be. Once you get the controls down, you can put together some crazy combos, and it never fails to make you feel awesome when you take down a crowd of creatures without taking a single hit. Like other games of this type, you can unlock and power up moves using orbs collected from enemies, so there’s a little bit of customization in there. You’ll also find new weapons and magic types as you play through the game, along with various items you can use to refill your health, extend your life meter, revive after death, and so on. Some of these items are hidden in secret rooms, so make sure to poke around the levels and see what you can uncover. At the very least, you’ll frequently come across extra enemies that give you a chance to practice your moves and earn some extra power-up orbs. You can also buy any of the items from the game’s shop using gems, which can be found during gameplay or purchased as IAP. 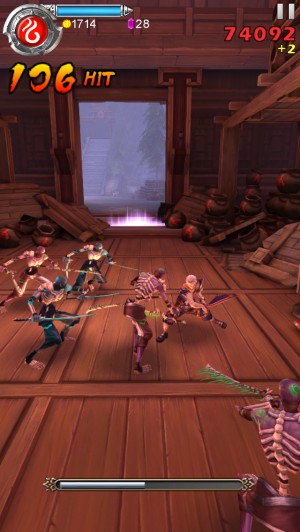 Those gems are probably going to have people wary, and it’s certainly understandable. The game gives them out to you in a fairly healthy supply as long as you only mean to use them to buy the odd item and max out your health bar, but there are also unlockable extra character skins and weapons, and to open up all of those, you’ll either have to play through the game a few times or buy some IAP. Beyond cosmetic changes, each new character or weapon usually has some type of small effect, like increasing how many orbs enemies will drop. They basically work like cheat items, and I had no trouble getting through the game without them. Playing through the game once earned me enough gems to unlock a few of these items, and subsequent playthroughs will earn you just as many, so it feels more like an old-school bonus item than an up-sell. If you really want to run around as a sexy swimsuit girl from the beginning, you’ll have to buy IAP, I suppose.

Apart from the goofy translation, the presentation is excellent. The graphics are gorgeous and the framerate is smooth on my iPhone 5S even when the screen is littered with enemies. Cutscenes are done in a comic book style that looks fantastic, and the music and most of the sound effects are quite good. Some of the groans and screams are pretty silly, and certain attack sounds could use more oomph, but that’s a small bone to pick. You’re given a score and a rank at the end of each stage, which gives you an incentive to replay to see if you can climb higher on the Game Center leaderboards. There’s also a list of crazy achievements to try and earn if you think you’ve got the skills. I wish there were more than one save file, and that stages were easier to replay without having to start the game over again, though. I also would prefer if I could save anytime I wanted to instead of relying on the admittedly frequent checkpoints. Also worth mentioning is that the game is playable in portrait orientation only, just like its inspiration. Since the game is designed around it, I have no issues with it, but I know some people might.

Ghost Blade is without question the finest example of stylish action available on iOS to date, and an essential pick-up for any fan of action games. It has a few rough edges, with the tutorials dragging on a bit too long, a weak localization that makes all the extra story details you can uncover less meaningful, and the odd enemy attacking from off-screen, but these relatively minor gripes are easily outweighed by the sheer depth and fun of its combat system. No, it’s not Devil May Cry or Ninja Gaiden in your pocket, but it’s still an outstanding effort for what appears to be a small, new developer. If this is what they made on their first try, I simply can’t wait to see what they do for an encore. I think Ghost Blade is a terrific game, it’s making a great impression in our forum, and if you’ve got any love for melee action, I suspect you’ll enjoy it quite a bit, too.