It’s really great when a well-made game seemingly comes out of nowhere, and that’s just what seems to have happened with the stealthy release of Princess And Knight ($4.99), a new strategy RPG that is so under the radar, I can’t find much proof of its existence beyond the App Store itself and a fairly new blog for the developer, Team SoftIceCream. Sometimes when that happens, it’s because the game isn’t quite ready for prime time, but apart from a really rough English translation, this is a remarkably solid effort from what appears to be an indie developer. The game design is unabashedly vintage, calling to mind SRPGs from the 16-bit console era and earlier, but there’s a certain appeal to a game that drops out of the complexity arms race that the strategy RPG genre tends to get swept up in at times.

As the game starts, we’re given a brief introduction to its world through a cutscene that runs just about the right length. A great kingdom has seen better days, and the peasants are revolting against the king and his family. Your goal is to see the princess away safely, though the road is very dangerous since pretty much everyone wants her dead. You’ll use a wide assortment of characters, but none stands more stalwart by her side than Amos, a mute knight sworn to protect Princess Farrell. As the plot develops, it quickly becomes apparent that although the movement seems to be a peasant uprising, sinister forces have been behind much of what has happened. The story isn’t nearly as interesting as it aspires to be, and it’s not helped by a mangled English translation, but the characters are enjoyable and I found myself getting into their various plights. Most of the tale is told via dialogue boxes in the battle engine, but there are occasional scenes where some nice hand drawn artwork is used for added effect. 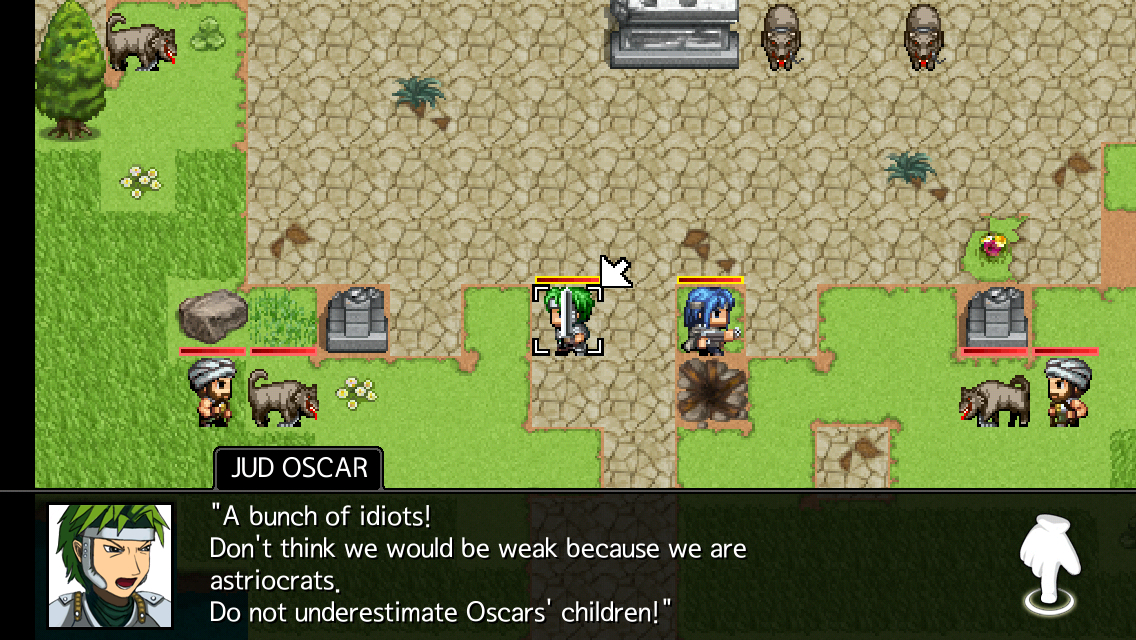 The game itself is just a linear series of battles without much more than a brief chance to shop in between each stage. Each stage sets you on a different map filled with an assortment of enemies and your goal is typically to take out all of the enemies without losing key party members or being wiped out. The gameplay is essentially meat and potatoes stuff for the genre. You take turns moving each of your units, then your opponents do the same. Each unit has their own stats and access to different special abilities that they can use at a cost of MP or energy. The knight is always going to be one of the guys you want to keep in front, while the squishy princess, whose life is frequently used as a losing condition, should be kept out of harm’s way. Characters will drift in and out for the first few missions, but you’ll soon start putting together an on-going team of named characters. Killing enemies earns experience and cash, and leveling up unlocks new special abilities along with beefing up your stats.

What makes the game stand out, for me, is how well each mission is designed. While the battle system is quite simple, the way the terrain is set up and which enemies you’re up against has a major effect on your strategy. Many maps offer little in the way of choke points, for example, and the game isn’t shy about forcing you to protect the princess somehow during these open missions. Splitting up your forces and making good use of provoking abilities are key elements of the gameplay, though there are also plenty of levels where you just have to hunker your meatshields down and hope you can outlast your foe. There’s nothing in here like the crazy, tense territorial squabbles of something like Tactics Maiden (Free), but there’s definitely enjoyment to be had from a simple set-up of your guys versus the bad guys. The AI is decent enough, and it will certainly try to spit in your Cheerios if you do something stupid like leave the princess in range, but strategy game veterans probably won’t find it to put up a very big struggle. The game has multiple difficulty settings, but that seems to have a bigger effect on the enemy stats than on their intelligence. 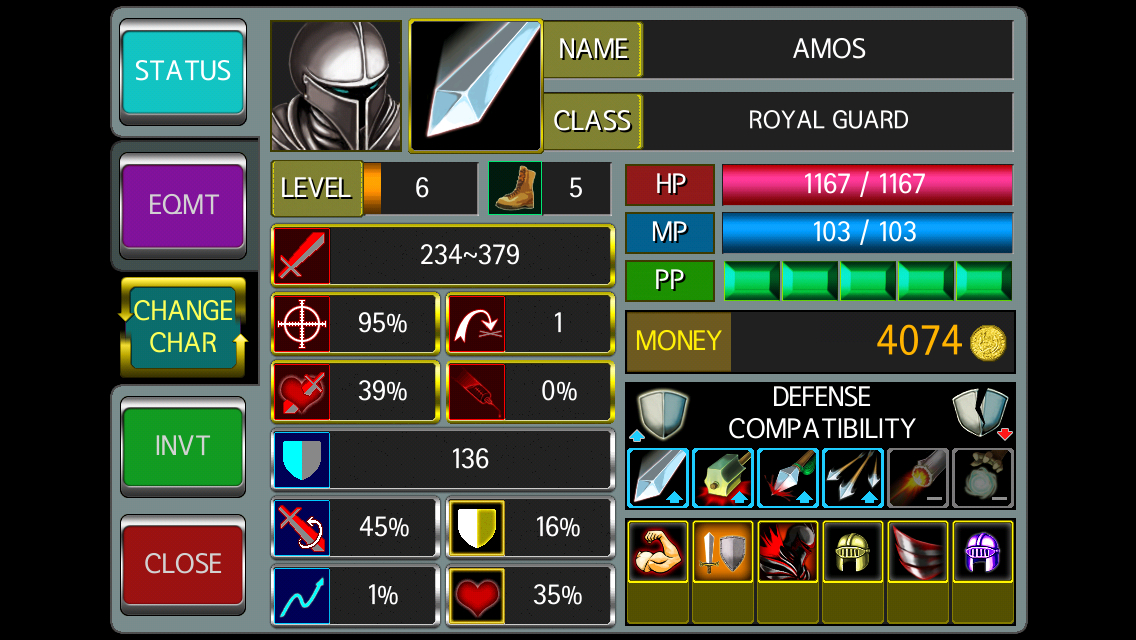 Princess And Knight uses a really good interface for controlling your units. Like many games in this genre, there are all kinds of buttons you can use to attack, move, and use special attacks, but you can also shortcut around a lot of that by double-tapping. For example, you can tap your unit once to see their movement range, tap the square you want them to move to, tap it again to lock them in place, tap the enemy beside them to target it, then tap it again to execute your attack. It’s a very sensible method that works well. You can even set which direction you want your character to face after moving, something too many strategy games forget to put in. It all moves very quickly, too, though I would have liked a fast-forward button for the enemy’s turn. My only gripe with the interface is that it doesn’t always give you as much information as you might like. In the shop, you can’t easily see if a piece of equipment is better than what your character is already wearing, for example. You also won’t be treated to any pleasantries like seeing your percent chance of hitting with an attack and such.

Visually, it uses a squat, super-deformed style for the characters, with each member of the cast having several different portraits to express various emotions. It reminds me of something like Shining Force on the Game Gear, albeit with a lot more color and detail. Sadly, there are no interesting animations to gawk at during attacks, but that’s probably to be expected. We’re not talking about SEGA or Nintendo here, after all. The strangest part about the game’s presentation is the music. I have no idea who thought buttrock was a good match-up for a fantasy-based strategy RPG, but my hat is off to you, sir or madam, because that was the last thing I expected to come out of my speaker when I flicked the mute switch off. It gets tiresome pretty quickly, as it’s pretty repetitive, but at least it’s repetitive in an interesting way. 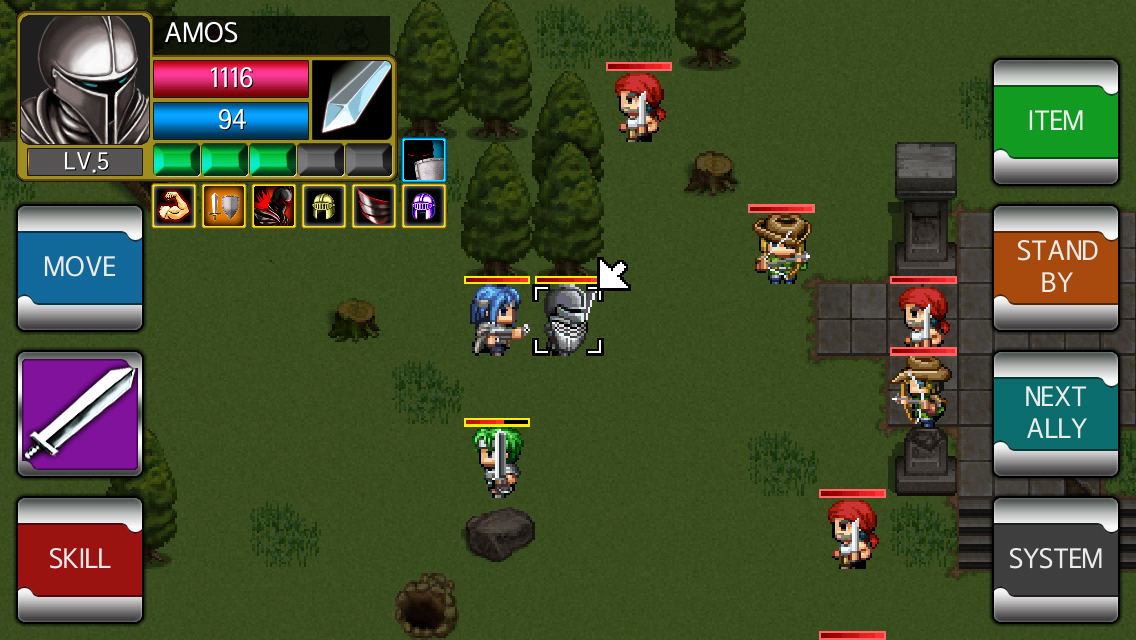 The mobile scene is home to many wonderful strategy games, and some of them feel like genius-level works of art in how intricate they are. Princess And Knight is not like that, but it is a very solid, straightforward entry into the sub-genre. Although its Korean, you can tell the developer has a real affection for classic Japanese SRPGs, and as a result, we’ve got something that feels like it dropped out of a 1992 SEGA Genesis catalog, right down to its translation. That should probably tell you all you need to know as to whether or not this game is for you. I certainly enjoyed myself with its direct take on the genre, and I’m definitely looking forward to whatever Team SoftIceCream cooks up next.