Look upon me, peasants and nobles alike. For it is I who have slain the mighty yeti, traversed the caverns of the Snow Witch and put her to her final rest, and helped fend off the orc hordes from the dwarven stronghold of Stonebridge. It is I who, after enduring countless deadly battles and outsmarting fatal traps, began to ascend the mountain where I would at last find my goal. It is I, the mighty hero, felled by the bite of a simple rattlesnake because my luck points ran out. So it goes in Fighting Fantasy: Caverns Of The Snow Witch ($5.99), the latest gamebook conversion from the prolific folks at Tin Man Games. It’s a fairly straight conversion using their trusty gamebook engine, so if you have fond memories of the original book and you’re wondering whether or not the iOS version does it justice, you can rest easily.

Fighting Fantasy: Caverns Of The Snow Witch is the ninth book in the popular Fighting Fantasy series of gamebooks. Written by Ian Livingstone, one of the creators of the series, it fits into the same continuity as The Warlock Of Firetop Mountain, Deathtrap Dungeon, and Forest Of Doom ($1.99), a high fantasy setting with dwarves, elves, dragons, and vampires. While co-creator Steve Jackson favored introducing wild new settings and rules into his Fighting Fantasy solo works, Livingstone was more than content to keep writing epic fantasy adventures with the familiar fight, loot, and luck mechanics put forth in Firetop Mountain. He also loved packing in the fights, and Snow Witch just might represent the culmination of those leanings. The book can be loosely broken into four main acts, with two of them previously published in Warlock magazine before being expanded on for the book we’re looking at today. It’s quite a long quest, and you may groan at times at its refusal to end, but the result is a gamebook with a more meaty and adventurous feel than most single stories tend to be in the genre. 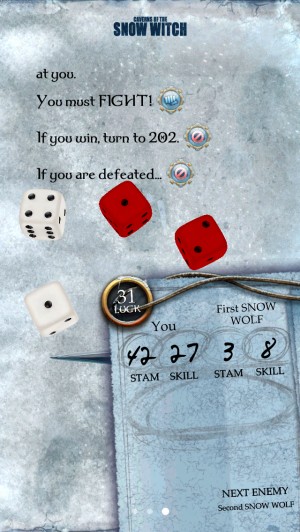 The whole thing spirals out so wildly, it’s hard to remember where the story started. I’m pretty sure you start off as a hired hand working to protect a traveling caravan, but you’re soon sent off on your first mission. Some kind of monster has made short work of the outpost your group intended to trade with, and the merchant leading the caravan has offered you a nice sum of gold to go and take care of it. It feels like it’s going to be a longer journey, but you’ll soon stumble across the monster and, with any luck, kill it. Its final victim makes a plea with his last breath that sends you on your next job, to enter the secret caverns located on this snowy mountain and dispatch the evil Snow Witch before she brings about an eternal winter where her power will rule. You’ll eventually find her, but after you do, you’re really only halfway through the story. I’ll leave the rest for you to discover on your own, but suffice it to say, it’s a long road ahead.

Snow Witch is extremely combat-heavy, with battles not only occuring frequently, but with very strong opponents even from the start. It’s a bit like Island Of The Lizard King ($5.99) where you sort of feel like you’re stumbling from fight to fight, but it’s a lot better here because you can often circumvent combat if you have the right items in your inventory. There aren’t many instant death choices in the book, but your luck will be tested very often, and if your score bottoms out from being pushed too much, one of them will get you sooner or later, as what happened to me on my first playthrough demonstrates. These are Ian Livingstone’s usual tricks, though, so as long as you follow the rules for surviving his adventures, you should be able to solve this one. Don’t go into the story with anything less than the maximum skill and luck, and pick up everything you possibly can. Fighting is almost always better than running, since enemies will often drop key items. There aren’t any crazy mysteries or puzzles to figure out in this adventure, so it really comes down to the dice and perseverance.

You can expect all of the usual bells and whistles that come with a Tin Man Fighting Fantasy conversion here. You can choose between different difficulty settings, from the pure book experience to the free read mode that lets you cheat like pretty much everyone did anyway back in the day. After falling to my snakebite, I have to confess that I ran my next playthrough on free read just so I could see how much farther I had needed to go to make it to the end. The answer was depressing. The black and white art from the book has been colorized here, though you can still look at the original art in the gallery after you’ve found it in the game. There is also a list of fun achievements that give you incentive to poke around and try things you might not otherwise. It’s a solid conversion, but that should be no surprise to anyone at this point. Tin Man’s efforts could easily fill a shelf at a virtual bookstore by now, and they haven’t failed in their conversions to improve on or at least match the quality of the source material yet. 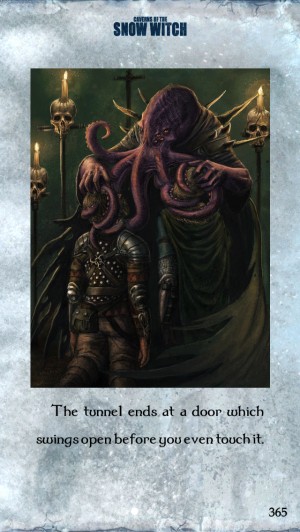 Livingstone’s writing comes off exactly as it was no doubt intended. It doesn’t feel like you’re reading a unique tale filled with clever characterization and well-written plot points so much as it feels like the words of a dungeon master, transcribed onto paper. Still, there are some fun surprises to be had, particularly with how it connects with other Fighting Fantasy books. It’s very likely you’ll want to pick up or replay Forest of Doom immediately upon finishing Snow Witch, and that’s a feeling you should definitely act on. I also enjoyed that your quest is briefly joined by a couple of companions, as they add a welcome social element to the story that is all too often lacking in these early gamebooks. Taking the story as a whole, it’s impressive how much happens in a relatively short span of pages, and even more impressive that in spite of the pace, it rarely feels rushed. My main criticism of the writing is that it leans a bit too hard on forked paths with absolutely no indicator of which one you should take, but that’s Fighting Fantasy for you.

In the past, I’ve heard some people complain about the length of Snow Witch and how disjointed and anti-climactic its last act feels. They’re valid complaints, and I think that’s a key indicator of how well you’ll enjoy the game. I ended up enjoying it a lot because it feels more organic than many of the Fighting Fantasy books, with the ever-increasing stakes bringing back fond memories of my old pen and paper days. It’s not especially novel or well-designed, but it feels very comfortable to play and at least has the courtesy to evenly distribute its difficulty among combat, random choices, item-hoarding, and stat checks. It would be nice if it were more upfront about how high your initial rolls need to be to survive, but if you’ve had experience with this series before, you’d probably know that anyway. Also, after being buried under promotion and hype for Disney’s Frozen for the last year, I sure did enjoy taking down a Snow Witch. All in all, it’s a very solid gamebook, and if you’ve enjoyed any of Tin Man’s other conversions of Livingstone’s work, it’s a journey worth embarking on.