It’s fun to think back to the launch of the Xbox 360 in 2005, when out of all the possible choices for a breakout early hit, the one that most gamers flocked to was the humble Geometry Wars: Retro Evolved. Starting as an in-house test demo, it’s still amazing to me that this little game not only carried a console through the dry launch period all hardware suffers from, but also dragged a sub-genre back into viability, where it still sits to this day. Suddenly, twin-stick shooters were popular and prolific in a way they perhaps never were before. Mobiles have particularly enjoyed the fruits of that success, with a load of great twin-stick shooters already and more releasing all the time. But although the genre was fairly quiet in the years prior to Geometry Wars, like any dormant genre, it wasn’t completely dead. One particular standout was 2003’s Crimsonland (Free), an early effort from a name many iOS gamers know quite well, 10tons Entertainment.

Okay, it’s a slight misnomer to call it a twin-stick shooter. It was a top-down WASD-mouse shooter, if we’re to be technical about these things. The game offered solid action, a huge arsenal of weapons and perks, and mild RPG elements. Well, perhaps 10tons is feeling nostalgic for their old days, because earlier this year, they released a special HD version of the game on PC, PlayStation 4, and Vita. It’s taken a few more months, but that remake is now available to iOS gamers. The core gameplay is very simple, placing you in a closed-in arena with tons of enemies spawning everywhere. You have to survive by killing them all with whatever weapons you can get your hands on, and my goodness there are a lot of them. Your character has a health meter and can take a few hits, depending on the enemy, before he succumbs, but chances are if one enemy is chomping your rump, you’ve probably got an army of them right behind. 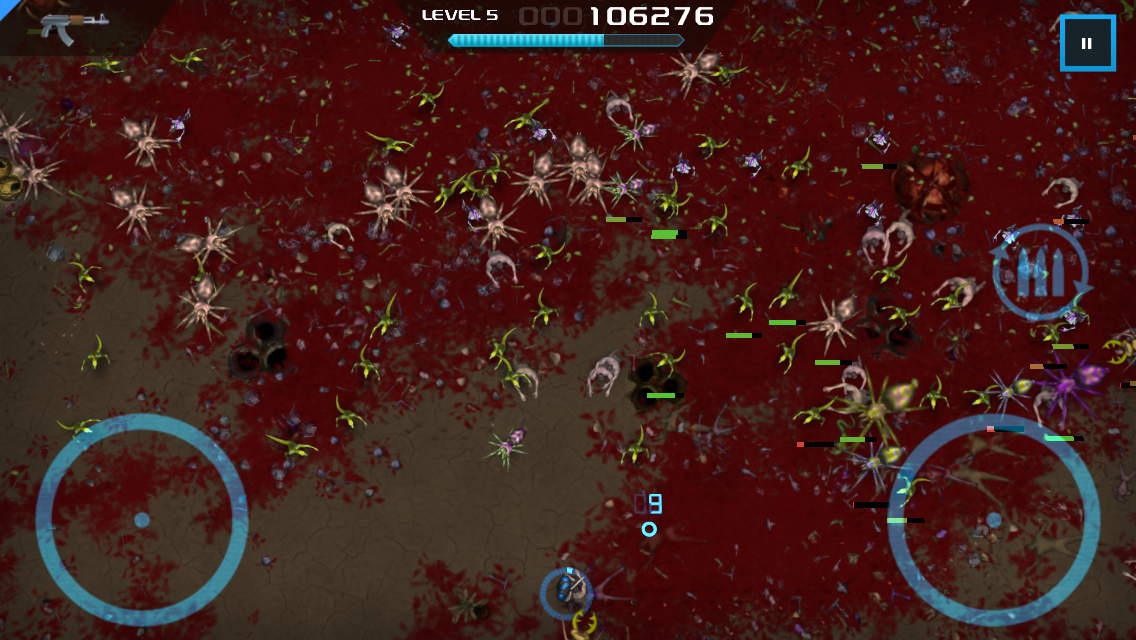 What separates Crimsonland from the pack is in its unusual structure and massive arsenal. The main menu presents you with two options, Quest mode and Survival mode. Quest mode has you play through preset levels trying to survive until all of the enemy waves are cleared out. Do that, and you’ll earn yourself either a shiny new weapon or a nice new perk. Weapons and power-ups will occasionally drop as you mow down enemies, and having the right weapon for the enemies you’re facing can make all the difference in the world. The levels are set up in six groups of ten stages, with three difficulty settings. You’ll probably want to spend time here first unlocking things, but clearing out all of the levels on every difficulty setting is a pretty hefty challenge in and of itself. Even clearing all the stages on the easiest difficulty isn’t exactly trivial. The fact that you’re handed a nice reward after each and every level cleared helps keep you motivated, along with being able to see via a meter at the top of the screen just how close you are to finishing the stage.

That’s just one side of the game, though, and in my opinion, it’s the lesser side. The other part of the game, the Survival mode, actually has five different types of survival games in it. You have to unlock all but the initial mode by playing through the Quest mode, however. The first option is the basic survival mode, which has you trying to survive as long as you can against a never-ending onslaught of creatures. In this mode, the bar at the top of the screen doesn’t track your progress towards the end of the level, but rather how close you are to leveling up, at which point you get to take your pick from a random selection of the perks you’ve unlocked in Quest mode. The longer you play and the more you kill, the stronger you’ll become, but the enemies will also ramp up and inevitably overwhelm you. It’s almost insane how many on-screen enemies there can be at one time in Crimsonland. 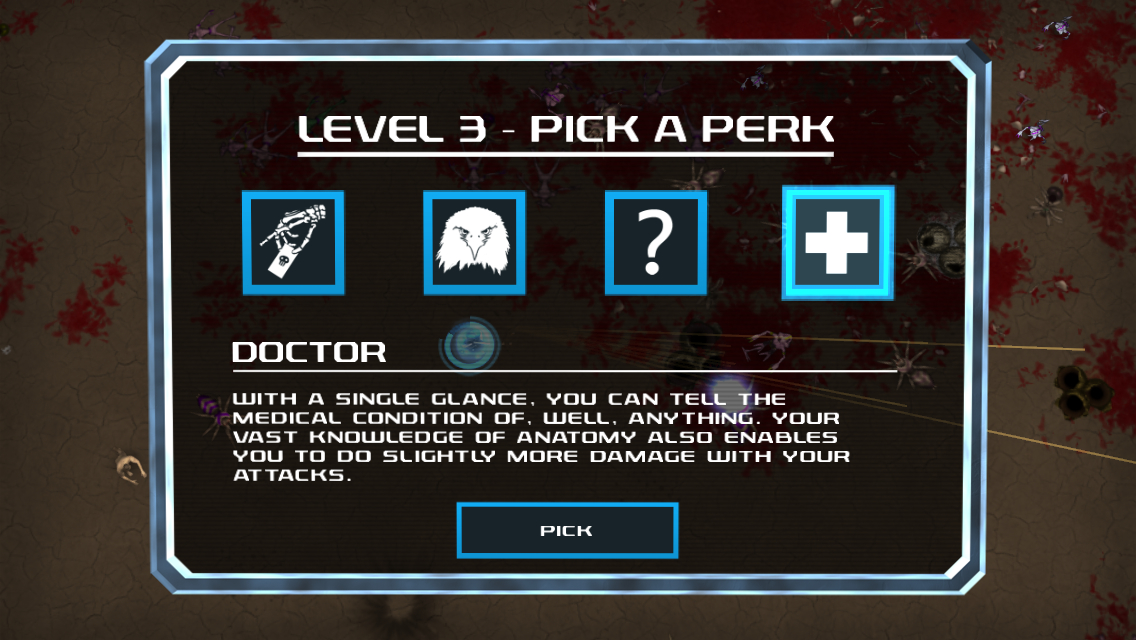 Three of the other modes are something of a gimmick twist on this idea. Rush gives you a gun that never runs out of ammo and has you last as long as you can without the benefits of power-ups, level-ups, or even different weapons. In Weapon Picker, weapons regularly spawn all around the arena, a nice change from the usual requirements of picking up something from the middle of the crowd you just killed an enemy in. Unfortunately, that weapon only has one clip, and once it’s spent, you’ll need to grab another one. This mode is fun because it forces you to make use of whatever you can get your hands on instead of just sitting pretty on your favorite. The last of the gimmick modes is Nukefism, a ridiculous challenge where you get no guns at all and have to survive on power-ups alone. It’s interesting to try out but, at least for me, it’s too hard to really enjoy all that much. The last mode is Survival Blitz, a speedier and more challenging version of regular survival mode. By the time you unlock this, you’ll probably be good enough to play it.

This version of the game is a twin-stick shooter through and through. Your left thumb moves your character in any direction, while your right thumb shoots in any direction using a virtual stick. There’s a virtual button that allows you to manually reload your gun, or you can simply let the bullets in the clip run out and have your character automatically do it, likely at the worst possible time. That’s everything you need to keep track of in terms of controls, making the game a natural fit for touch controls. On the other hand, if you have an MFi controller, you can use that for actual twin-stick gameplay. No matter which method you use, it’s just a little bit harder to get the precise angle you want here than in something like a radiangames twin-stick shooter, but it’s reliable enough. Most of the weapons you use have a pretty high rate of fire, which helps a lot towards hitting those in-between spots, but if you’re using any of the guns that fire one shot at a time, you’ll need to practice a bit more. 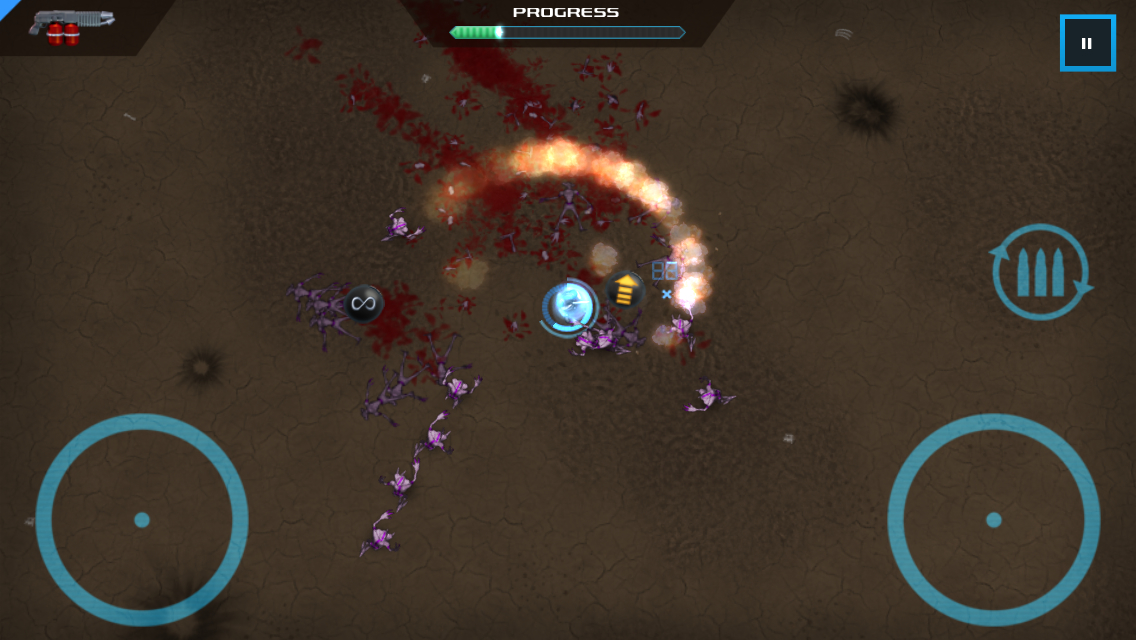 In case you’re wondering why the game is called Crimsonland, it’s because your enemies spill their blood on the battlefield as you take them out. It doesn’t take long for the green, gray, or brown backdrops to get painted red as you unleash your carnage. It’s a nice trick for a game that has a somewhat bland art style otherwise. It’s all perfectly functional, with your character, the enemies, and power-ups standing out well from the background and each other, but it’s definitely got a drab look to it. The game makes up for it on the technical side, with crisp, smooth graphics, even when the battlefield is in absolute chaos. The music is generic rock, of the variety that was popular in PC action games of the 90s and early 00s. It fits the game well, I suppose. The sound effects are great, with all of the sounds for the guns carrying the necessary oomph, and the unusual death scream of your player kept intact from the original game. The game also has Game Center support for leaderboards and achievements, with a leaderboard for each of the survival variations.

Initially, I was a bit skeptical about Crimsonland. It’s a remake of an older game in a genre that has seen a lot of strong entries in the intervening years, and it’s not the most stylish of games to look at. It didn’t take long to win me over, however. I love unlocking new things, and it’s even better when those new things have a tangible impact on gameplay the way they do here. The shooting action feels very satisfying, with your shots having an appropriate weight to them depending on the gun you’re using. There’s a lot of variety to the enemies, and some downright surprising behaviors out of some of them. The way Quest mode is set up kept me coming back for just one more level constantly, and the Survival mode only becomes richer and more exciting every time I play it. There’s a lot of content and variety in this game, far more than we typically see in this genre. 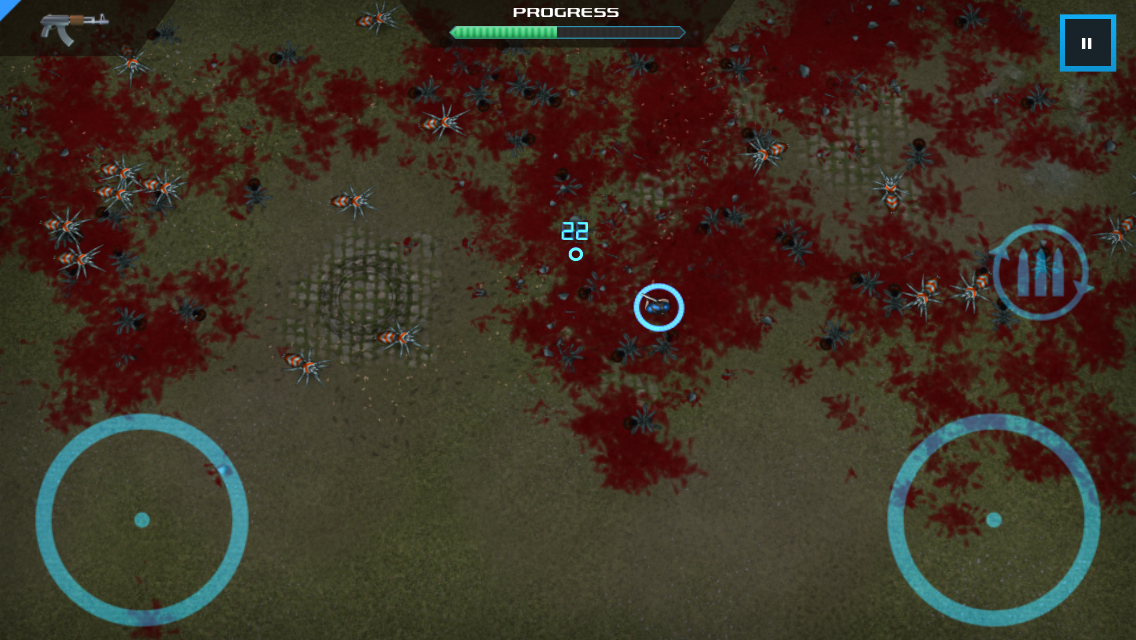 Crimsonland‘s initial download is free and includes the first ten levels in Quest mode and the basic Survival mode. If you want the rest of the Quest stages and the unlockables that come with them, you can pay a one-time IAP of $4.99. The free part of the game serves as a nice demo for what you can expect from the full game, so you should definitely give it a try and see how it fits you. The sheer variety of the gameplay will probably keep this game on my device for a long time to come, and it’s an easy recommendation to anyone who enjoys shooters or action games in general. It’s challenging, fun, and gives you a huge amount of toys to play around with, provided you’re good enough to pry them off of dead spiders and zombies.