As a developer, if you’re going to wade neck-deep into a crowded genre, especially one in a very crowded marketplace in general, you have to have some kind of means of standing out from the crowd. When it comes to side-scrolling running games, it’s getting harder and harder to find something that can actually accomplish that job. Jack B. Nimble ($1.99), from developer Sean Noonan, opts to take the approach of a double-barreled appeal to nostalgia, with graphics that look like they came off a torqued-up Game Boy and a theme that will be instantly recognizable to Castlevania fans. It’s got an interestingly familiar cadence to it that I don’t see very often in this kind of game, and it will certainly have strong appeal for those who appreciate streamlined runners like Canabalt ($2.99) or Boson X ($2.99). 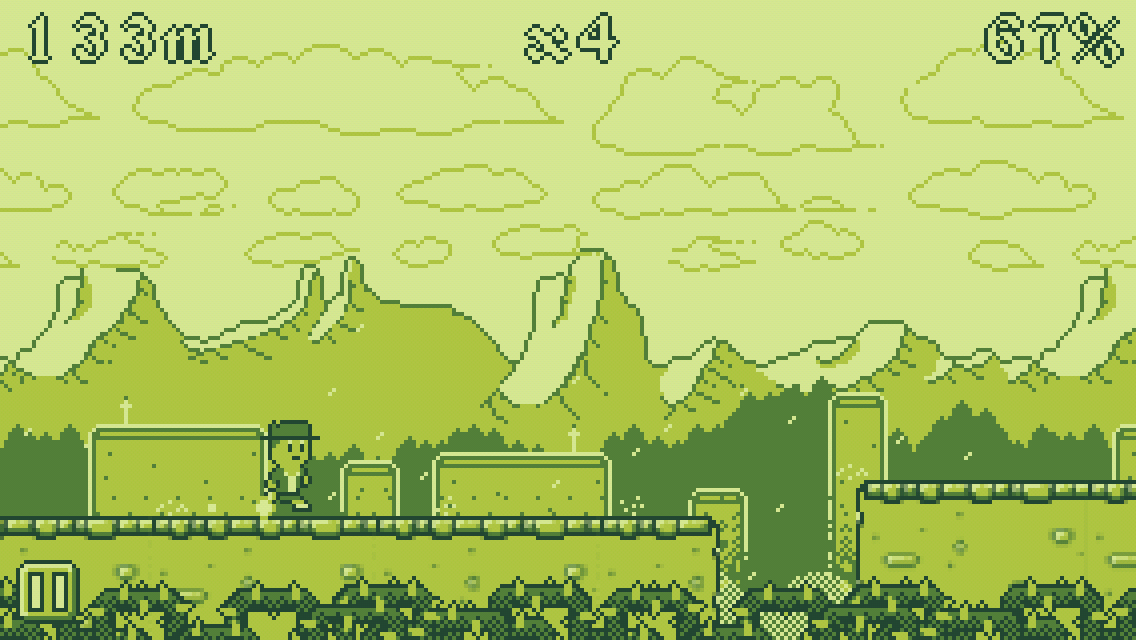 Jack B. Nimble is an endless auto-runner, played from the traditional side-scrolling point of view. Our hero Jack seems to have raided the closet of Dr. Jones, including that iconic whip of his. For long-time video game fans, a hero with a whip brings to mind one other image besides intrepid archeologists, however, and adding candles that you can hit with that whip pretty much seals the deal. This game makes no beans about its inspiration from Castlevania and the Belmonts, with the spooky feeling of the backgrounds and weather effects calling that storied series to mind almost as readily as the NES Castlevania-inspired chiptunes playing in the background. If you’ve played those games before, you know there’s almost a rhythm to the way you move forward. Belmonts don’t go in halfway on their jumps, and with candles placed all around the levels holding precious power-ups, you’ll generally play the game timing your jumps and forward movement to hit all those candles without stopping.

That’s basically what Jack B. Nimble asks of you. Jack automatically runs forward faster and faster as time goes on. A single tap will make Jack jump, and tapping again while he’s in the air will crack his whip. Naturally, your first priority is to ensure poor old Jack doesn’t fall into an endless pit of death, but the other objective is to whip every candle you see on the way. There are no power-ups to be had for doing so, but your score is strongly tied both to how many candles you’ve whipped and how many you’ve let slip by you. Ideally, you want to whip every candle, but managing that while keeping Jack alive can be pretty tricky. There are no enemies or anything like that, just increasingly precarious perches and ledges to try to leap to. You’ll occasionally come across tall grass that will slow down your movement, though that can be a curse as much as it is a boon depending on how much you’ve gotten used to your current pace. 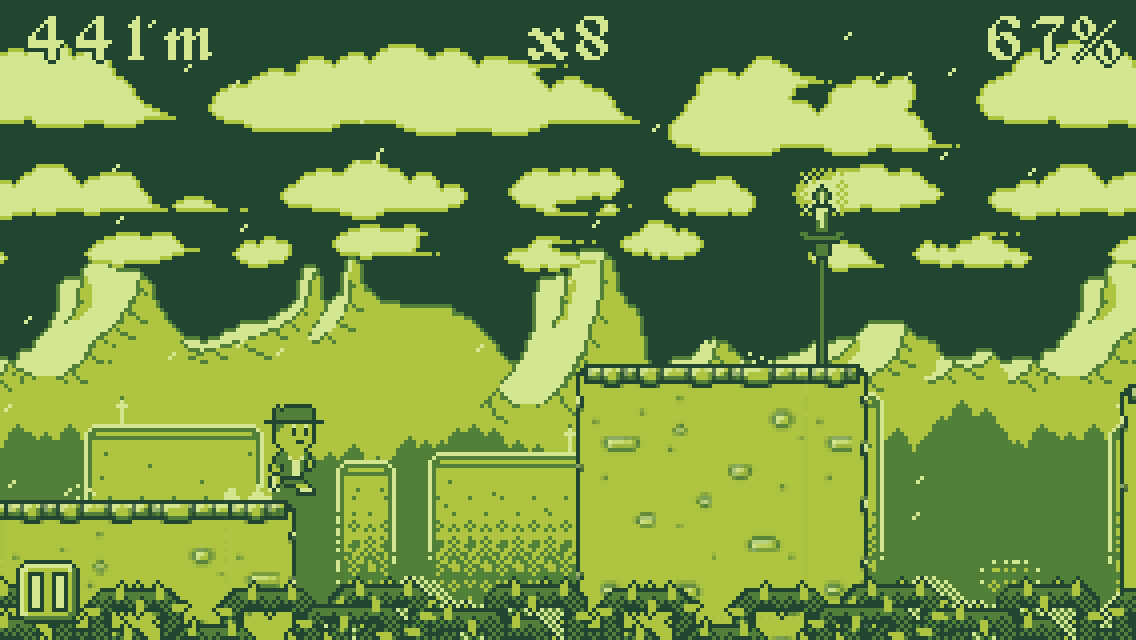 The visuals are strongly patterned after the type seen on Nintendo’s Game Boy, though they’re obviously well beyond that hardware’s capability, with a few layers of parallax scrolling and a lot more detail, to say nothing of the cool weather effects. There is a bit of variety to the backgrounds and platforms, though I suppose you’d be forgiven for not noticing it between the speed of the game and the limited color palette. As you play, you’ll even have to contend with foreground objects blocking your view. The music is excellent, perfectly calling up the image of 8-bit Castlevania almost immediately. It might be weird to say this, but it really helped me get into the right frame of mind for jumping and whipping. It’s a bit scarce on options right now, though the description in the App Store mentions extra color palettes are coming, along with something that probably should have been here in the first place, Game Center support.

Without that, the game feels a bit hollow, since you can only compete with people by handing your device around. Sure, it’s fun to try to beat your own score, but it’s more fun to compete with friends and others, and that’s a bit more difficult when you have to do it the old-fashioned way. It feels like Game Center should be a basic standard for auto-runners at this point. Since Jack B. Nimble doesn’t have any IAP or any way to pay to gain an advantage, I think it could make for some excellent competition once that support is added. The unique feel to its jumping and whipping gameplay combined with the demand for hitting as high a percentage of the candles as possible gives it a fresh feel, like a hardcore twist on Halfbrick’s classic Monster Dash (Free).

As there isn’t any IAP to be found, the game does carry a price tag, but I don’t think it’s a terribly unreasonable one if you’re into running games. Jack B. Nimble is a bit content-light at the moment, but the core concept of the gameplay is set up well here, and that’s the most important part to nail down. It’s picked up a small following in the thread in our forum on the strength of its simple yet challenging gameplay, and the developer is participating there as well, so you might want to check it out for more information. If you’re spent on this genre, it’s probably safe to give this one a pass, but if you’ve got a strong affection for the Game Boy, a deep appreciation for loose references to a certain vintage Konami franchise, or just like solid no-frills runners, you’ll likely get your money’s worth out of this atmospheric throwback.