Some gamers know Hironobu Sakaguchi’s name. Others do not. Just about everyone is familiar with his work, however. He’s the creator of the Final Fantasy series of games, the director of Final Fantasy 1 through 5, one of the designers of Chrono Trigger, the producer or executive producer of Final Fantasy 6 through 12, and unfortunately, the director of the feature film Final Fantasy: The Spirits Within. In 2003, he resigned from the company built on his efforts to strike out on his own, just before the merger that created Square Enix. His new company, Mistwalker, debuted with a bang, releasing two great RPGs on the Xbox 360, Blue Dragon and Lost Odyssey. These titles were backed by Microsoft money, and it was hoped they would give the 360 what it needed to compete in the Japanese market. Unfortunately, they didn’t go over quite the way Microsoft had hoped. 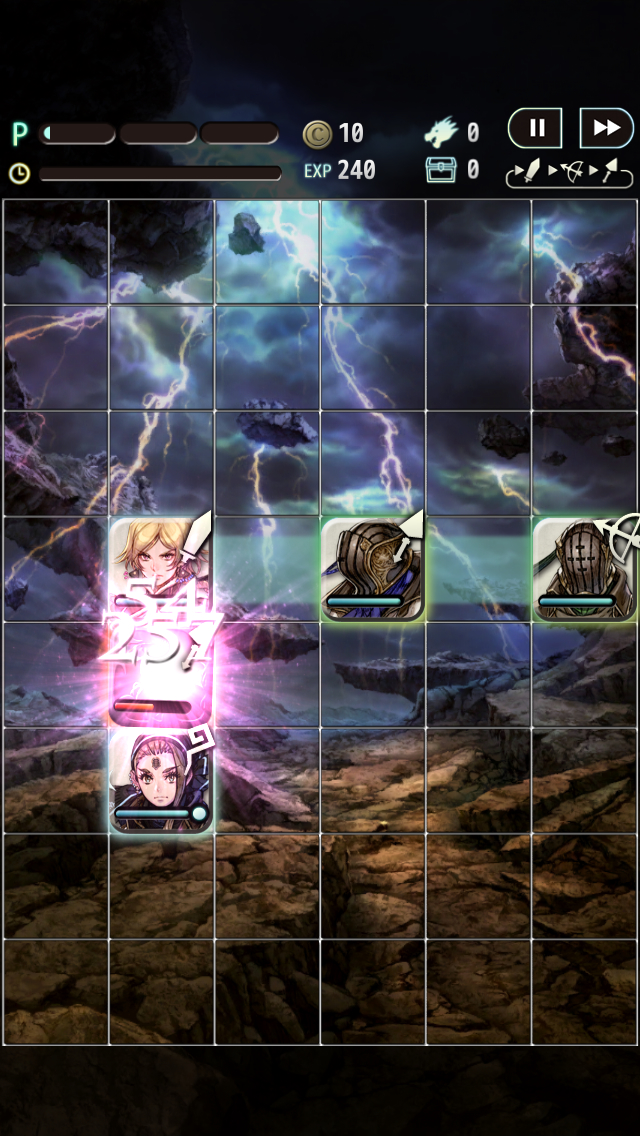 Having already teamed with Nintendo on a DS title, Mistwalker moved their fortunes to that system, working with a few different publishers to somewhat middling financial results. Sakaguchi then made his return to consoles with The Last Story, created in partnership with Nintendo for the Wii. The title appeared to have been prophetic thanks to its somewhat weak sales results, and for a while the only things we heard out of Mistwalker were the unusual Party Wave (Free), a bizarre little trifle focused on Sakaguchi’s real love, surfing, which was followed soon after by a relatively unexciting strategy game called Blade Guardian ($0.99).

But you can’t keep a good man down, especially one with such an iconic mustache. It appears we have not heard the last story or the final fantasy from Hironobu Sakaguchi, because he’s back with a new fantasy-themed social RPG called Terra Battle (Free), and though he might have set out to make a money-making game riffing off of Puzzle & Dragons (Free), he just couldn’t help himself from making a fine game out of it.

Terra Battle is a free-to-play social RPG, and like most social RPGs from Japan, its basic structure is heavily informed by Puzzle & Dragons. You’ll form a party from characters and monsters you collect to take on each chapter of the story. Within each chapter are a number of stages, and each stage has a set number of battles. You need to clear all of the battles in a stage without losing all of your party members to finish it. Finish all of the stages in a chapter and you’ll be rewarded with some energy and access to the next chapter. You’ll occasionally earn new characters from battles, but your main source of new blood comes from the tavern, where you can put up some easily-earned coins or hard-earned energy to get a random character or monster. Typically, coins earn you generic characters, while energy earns you powerful named characters. You can bring up to six members into battle with you at one time. 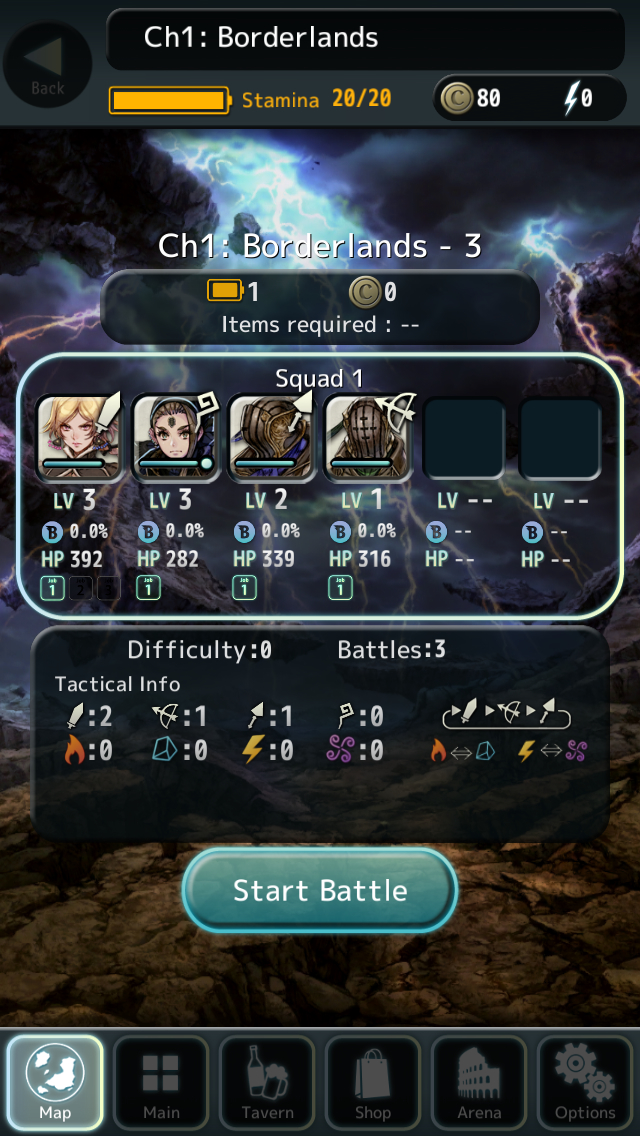 As you might expect, the story has a bit more work put into it than we usually see in this type of game. The game takes place in a world on the brink of destruction, populated by three races that don’t see eye-to-eye. Each of the groups seeks their Maker, said to be resting deep within the planet. Your group sets out to explore this mystery and hopefully find some hope for your doomed world. The story is told in small text pieces before each stage, and although it’s very minimal, it’s quite effective. I’m not sure if we’ll ever get a resolution to the story, with the game being what it is, but the effort is still appreciated. I also enjoyed the well-written profiles accompanying each character’s art.

Anyway, you put together your little team of characters, and all is looking very familiar at this point. Multiple currencies, a premium currency that can be spent for rare pulls, a stamina meter that can be replenished with said multiple currency, and I’ll bet I can use that stuff to continue if I lose a battle, too. Oh, look, I was right. We’ve seen this setup a million times before, and apart from the absolutely brilliant music playing in the background, it doesn’t seem like something that would have come from the hand of the guy that launched JRPGs into the worldwide consciousness. At this point, you come to the battles, and finally, we can see the master’s touch. He’s working with limited resources, but he’s still working.

At first glance, it seems almost tragically primitive. You have an eight by six grid with your characters portraits laid out on some of the spaces, and the portraits of the enemies laid out on others. Numbers on each enemy card indicate how many turns you have before they attack, and on each turn, you can move around one of your units for a certain amount of time before settling them into a space. Like Puzzle & Dragons, you can use this unit to push your other members around, effectively moving them without even touching them, but once your timer is up, the character your finger is on drops into the square and your turn is done. Well, obviously, we want to move our character over next to an enemy, right? That’s not enough, though, because to attack the enemy, you need to flank them. This immediately gets your mind rolling on how to surround an opponent when you can only move one piece at once, teaching you the pushing technique that is so vital to games like these. 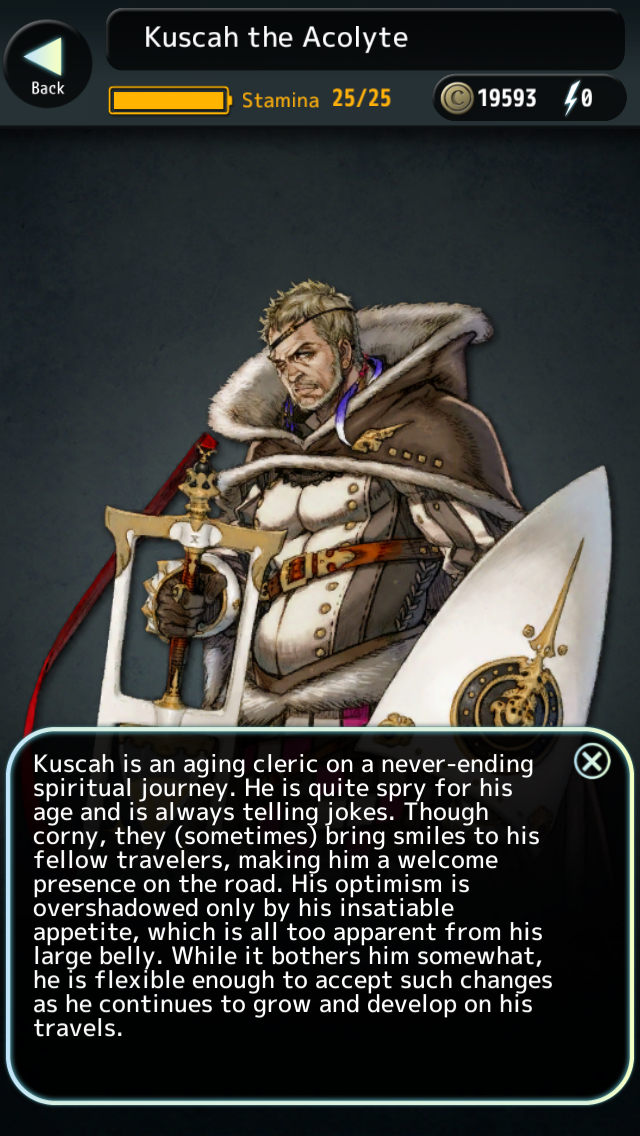 Initially, you greatly overpower the enemy, so clearing them out is a pretty simple matter. The heat turns up soon enough, however, and enemies will not only start behaving more intelligently, they’ll also throw out a variety of special attacks. These attacks will often cover certain patterns around the enemy, and many of them will knock your units out of their positions. Then there are the bosses, who are not only loaded with deadly attacks, but can also just knock your characters out of the way just by moving around. It’s not long before you actually have to learn how to play this game properly. There’s not an ounce of luck involved in the battles, so passing or failing depends on two things: the strength of your team, and your strategy.

Flanking your opponents delivers a basic attack, and there’s a chance it will also trigger one of your special moves. These things are great, but not sufficient in the long run. You need to pay attention to more than just the two flanking units, positioning your other units in such a way that your whole party is connected in a crazy web of destruction. If you can do that, you’ll start stacking up damage as your characters trigger combo after combo until someone or something knocks them out of it. You also need to consider the weapons your units are using compared to the enemies. There’s a whole rock-paper-scissors triangle going on with spears, swords, and bows, and while an attack is an attack, if you want to maximize damage and minimize casualties, you need to keep the strong units out front and the disadvantaged ones in supporting positions. It’s an easy thing to do when all of the enemies are of one type, but you’re rarely afforded such luxury. Prioritizing is key.

The battles are the heart of Terra Battle. They’re clearly the most well thought out part of the game, and they’re what will keep you coming back. I play a ton of games in this sub-genre, and the level of strategy here compared to literally everything else I’ve played is astounding. It’s also tethered inexorably to a free-to-play experience, unfortunately. I mean, don’t get me wrong, it’s great that anyone can try this out for free, because I think it would be a hard sell otherwise with its spartan look, but you will eventually hit what feels like a soft paywall. It’s hours into the game, but it’s there. The game is fairly generous with giving you energy, and I’ve received more than enough to put together a full team of named characters, but misfortune or a slightly tweaked balance could turn this game from beautiful to ugly in a heartbeat. The stamina meter chafes badly, too. The cost of playing each stage increases as you go along, and it picks up far faster than your meter increases. It’s not long before you’re at a point where you can only play a couple of stages before taking a break. By that point, stages are running pretty long, but it’s still a bummer if you’re looking to cozy in for the evening on this the way you would another Sakaguchi epic.

I think that expectations are an important factor in how well you’re going to enjoy Terra Battle. Compared to the average Sakaguchi game, it’s a bit meager and the free-to-play stuff is certainly not to the game’s benefit. On the other hand, stacking it up against other social RPGs shows it to be something well beyond that category’s typical effort. On one side, stamina meters, premium currencies, and paywalls. On the other side, an excellent story, an extremely engaging combat system, and some of the best music I’ve heard in a mobile-original game, courtesy of Final Fantasy composer Nobuo Uematsu. Terra Battle is a game that gives me conflicted feelings, like if you hired David Bowie to write and perform a jingle for laundry soap and he just completely knocked it out of the park, but at the end of it all, it’s still a soap jingle.

Okay, before I come up with any other terrible metaphors, I’m going to bring this review to a close. I think Terra Battle is an excellent game, and at least as far as its battle system goes, it might be the most well-designed social RPG ever made. It’s better than a handful of the full-priced games Sakaguchi has stamped his name on, to be sure. I strongly recommend trying it, but do so knowing that as good as it is, it’s all ultimately in service to the same basic principles every free social RPG runs on. All of those things keep the game from being all it can be, and in the case of this game, it’s a real shame, because I think what this game could have been is something truly exceptional, instead of merely great.