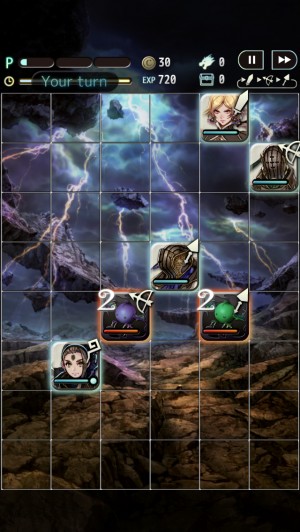 After about a month of soft release in the deadly wilderness of the Canadian App Store, Mistwalker’s latest game Terra Battle will finally hit App Stores worldwide on October 9th. The latest project from Hironobu Sakaguchi, the creator of Final Fantasy ($7.99), Terra Battle is a more strategic take on the popular model of social RPG popularized by Puzzle & Dragons (Free). While it features many familiar trappings, such as a stamina meter, premium currency, and random character and monster pulls, this game has a couple of things that set it apart from most of the pack.

The battles play out like a somewhat simplified strategy RPG, with the positioning of your characters and their strengths and weaknesses determining how effective their attacks will be. To win, you have to corral, surround, and outflank your opponents, and for their part, they have a lot of tricks to slip away or turn things around on you. I’ve been playing it since the soft launch, and it’s got quite a bit more depth to it than I’m used to from games of this sort. The rate for pulling rares could use a little tweaking, but for the most part, it’s a game you can overcome if you’re clever and make good use of your resources. Another interesting thing is the well-written story, delivered out piece by piece between levels. It’s just text, but it’s pretty good stuff. Finally, the music is composed by the legendary Nobuo Uematsu, the composer behind the first ten Final Fantasy games, and it’s a nice mix of the expected and experimental.

I don’t want to give you misconceptions, because this is still a free-to-play game and there are naturally a few monetization elements to it. Even legends need to eat, after all. However, it’s one of the more strategically interesting games I’ve played in this sub-genre, so if you’ve been interested in these types of games before but wanted something deeper than matching pieces or tapping, you might want to give Terra Battle a download when it arrives in your local App Store on Thursday, October 9th.