Here at TouchArcade, we try to keep our eyes open for lesser-known treasures, since not every great game has a great marketing budget to go with it. I feel like we do a pretty good job of it, but sometimes, we do miss something interesting or cool. Star Saver (Free) assuredly qualifies as both of those things, and I’m sad to say that I don’t think we’re the only ones who missed it. This game is a huge Metroid-style action-adventure game that has elements of Kirby, Mario, and Knuckles Chaotix of all things woven into it. This is probably one of the longer games in this genre I’ve seen on iOS, and although it’s not much of a looker and has a few rough spots, I think it’s something any fan of the genre should at least check out.

In Star Saver, you play as a little squid named Squidly, who goes out exploring one day and has the misfortune to end up tethered to the idiot Prince Squishy, a big, blue, gluttonous blob who demands you help him get back to his home. The magical Star Saver wand has fallen into the wrong hands and the stars are disappearing from the skies, and it’s up to this unlikely duo to save the galaxy. To do this, they have to collect all the stars from the game’s 25 different levels. You jump into a level from the hub by going through its door, and exit the level by grabbing one of the stage’s stars. Each stage contains a number of stars to collect, though you won’t be able to get all of them without first unlocking some new abilities in later areas. 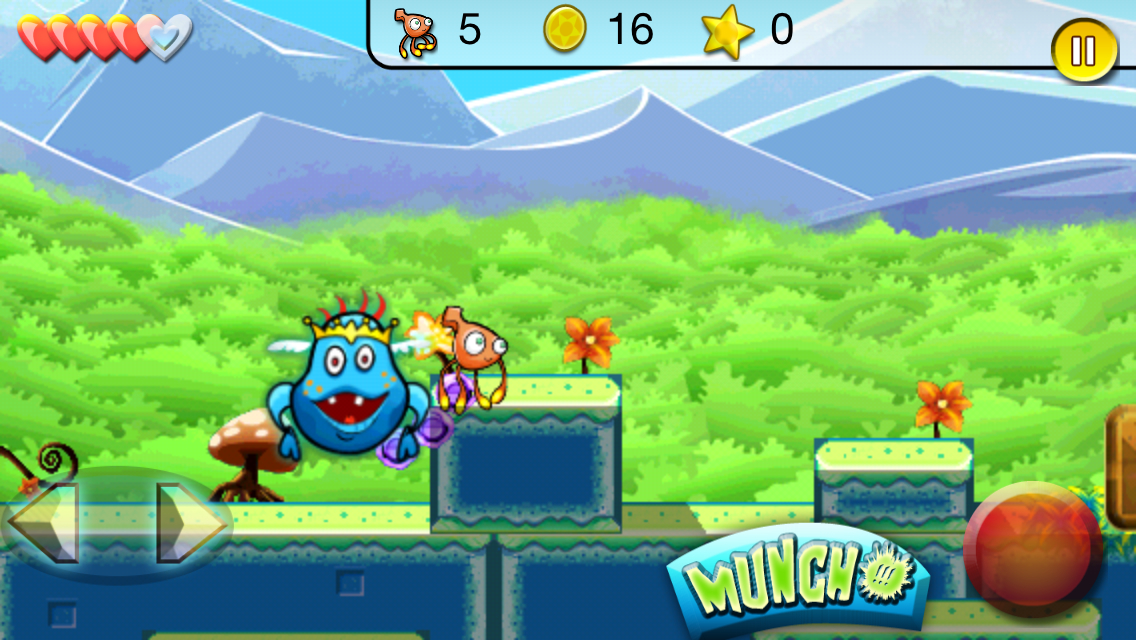 Squidly can run and jump with the best of them, and he’s even pretty good about jumping on heads without taking any damage, but he’s not much on offense. This is where Squishy comes in. He’s got a huge appetite, and if you throw him at an enemy, chances are good he’ll swallow them up. Most of the abilities you unlock in the game belong to the Prince and revolve around his eating ability. For example, you can unlock the power to inhale Squidly and roll along spiky areas unharmed, or the ability to swallow keys and use them to unlock doors. Squidly and Squishy are connected by a sort of elastic band made of energy, and they’re both affected by collision, so if Squishy gets caught on something, you’ll only be able to go so far before you get bounced back. This could get annoying, but the developer seems to have anticipated this by allowing you to call Squishy back immediately by hitting the “munch" button. It’s still sometimes a pain in tight quarters, though, especially during puzzles.

There’s a clear appreciation for Metroid and its many offspring in Star Saver. You even get the traditional opening playable prologue with a powered-up character to kick the game off. Genre staples like save rooms, auto-maps, and health upgrades are scattered throughout. Squishy gets his new powers by eating cake, and the cake rooms are quite reminiscent of the Chozo rooms from Metroid in some ways. Collecting stars is a clear nod to the 3D Mario games, and it goes one more with the Mario connection by allowing you to collect coins for extra lives. Having a lives system in a game like this feels a little strange, but I never actually ran out of them, so I guess it didn’t matter in the long run. 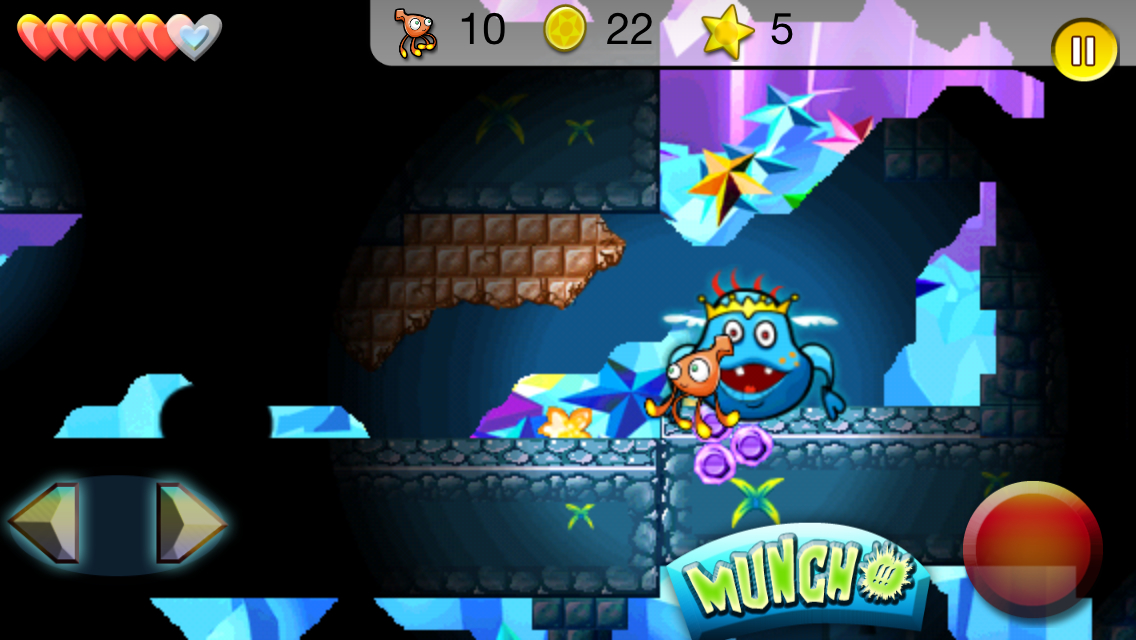 If you happen to have an MFi controller, the game is compatible, but otherwise you will have to make use of the game’s virtual buttons. There are directional arrows to move left and right that are placed just a bit too close together for my liking, and buttons for jumping, munching, and context-sensitive actions. Pausing the game brings up a map, and from here you can instantly warp back to the hub or exit the game. The controls work alright, but I wish I could move them around a bit, since I find myself tapping where I apparently want them to be rather than where they are fairly often. When you add in some of the random weirdness that is going to happen when the playable character is tethered to another character by an elastic band, it’s a recipe for a tasty gumbo of somewhat unreliable behavior.

The graphics are kind of weird in that they sometimes look really good, but sometimes look kind of cheap and bad. I will confess that the look of the game, along with the terrible icon, is the reason why I passed it over in the first place. That said, once you get into the game, there’s quite a good variety of colorful levels and well-animated characters. I think it’s just Prince Squishy himself who doesn’t quite do it for me. The music is retro-inspired, with plenty of bouncy, lighthearted melodies along with a few slightly more ominous tunes. The game is unfortunately a bit light on options, with no sign of Game Center or even other more basic bells and whistles. 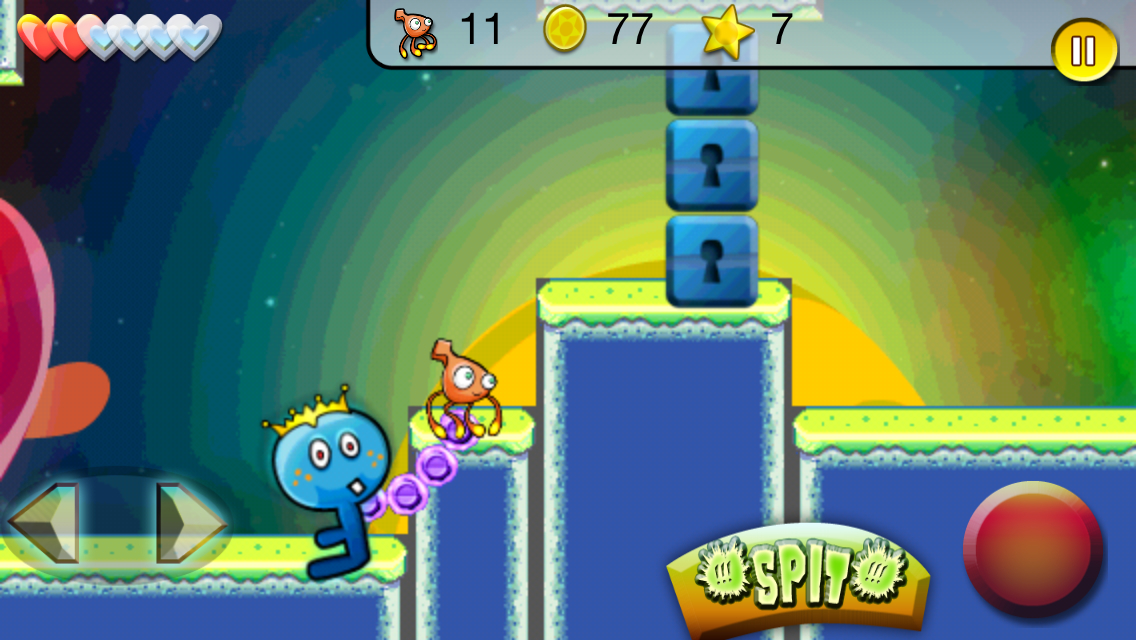 So, yes, the game is pretty rough around the edges. The load times are a bit long, the collision sometimes goes goofy thanks to the basic play mechanic, and the game even uses basic iOS dialogue boxes for saving your game. Even with all of its little quirks and issues, however, it’s still a really enjoyable game. I was surprised by the scope of the adventure, with the main quest easily running over twice the size games of this genre usually go on mobile. It was really fun figuring out how to get all the stars in each level, and the banter between Squidly and the Prince was actually pretty funny at times. It’s the kind of game that you might have rented from some forgotten corner of the video store back in the day when everything else was gone, only to find it’s a pretty nifty game in its own right.

Star Saver is free to try out, giving you the prologue, part of the hub, and the first level to play. After that point, you can choose to pay a one-time unlock IAP of $4.99 for the rest of the game, or continue playing with ads. The amount of content in the game is more than worth that asking price, but even if you don’t feel the same way, you can still play the game, albeit with some slightly annoying ads. That’s a pretty fair deal no matter how you slice it. It has a few little flaws that you have to come to grips with, but once you do, Star Saver is one of those hidden gems you’ll cherish. Don’t make the same mistake I initially did, because this game is too much fun to miss.