One of my favorite poems in the English language canon has, ironically, a Latin title: “Dulce et Decorum est." In it, English poet and soldier Wilfred Owen tells his audience that, had they seen the chlorine-tinged carnage of trench warfare first hand, they

would not tell with such high zest,
To children ardent for some desperate glory,
The old Lie: Dulce et Decorum est
Pro patria mori.

That last line, an allusion to Horace’s pro-war ode of the same name, means “It is sweet and right to die for the fatherland." Owen clearly didn’t believe this (“The old Lie"), and Emile Chaillon — father, farmer, sapper and trench-digger in the French 150th Regiment, prisoner of war, and arguable protagonist of Ubisoft Monpelier’s Valiant Hearts: The Great War (Free) — probably doesn’t either. 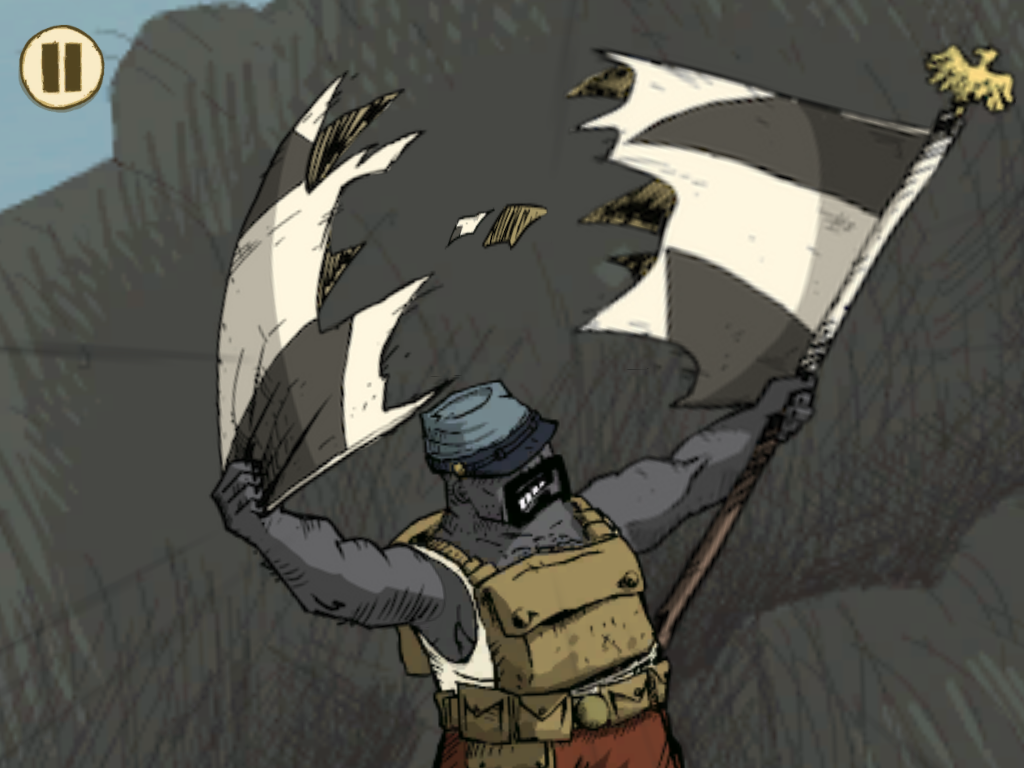 I say arguable because Emile shares the spotlight, at various points during Valiant Hearts, with Karl, his deported German son-in-law soldier; Freddy, an American-born volunteer in the French Foreign Legion; and Anna, a Belgian nurse. They criss-cross war-ravaged Europe saving lives and hoping to re-unite with loved ones, hiding in bushes and opening gates and cranking levers and connecting pipes, all drawn into lush, two-dimensional levels.

While nominally a puzzle or adventure game, Valiant Hearts is mostly narrative: its puzzles aren’t particularly mind-bending and are instead used to illustrate the drudgery and insidiousness of life in the trenches. The game’s touch controls don’t always handle quick movement or delicate timing well, but it’s not a huge problem.

Each playable character has a special skill to help them navigate the horrors of World War I — Freddy has bolt cutters to easily snip the barbed wire that grows like kudzu along the Western Front, for example — but the same basic controls govern them all. Obviously, it doesn’t make sense to design four different control schemes, but the game’s most basic functions also lay its moral foundation: the soldiers on both side of any war have more in common than not. 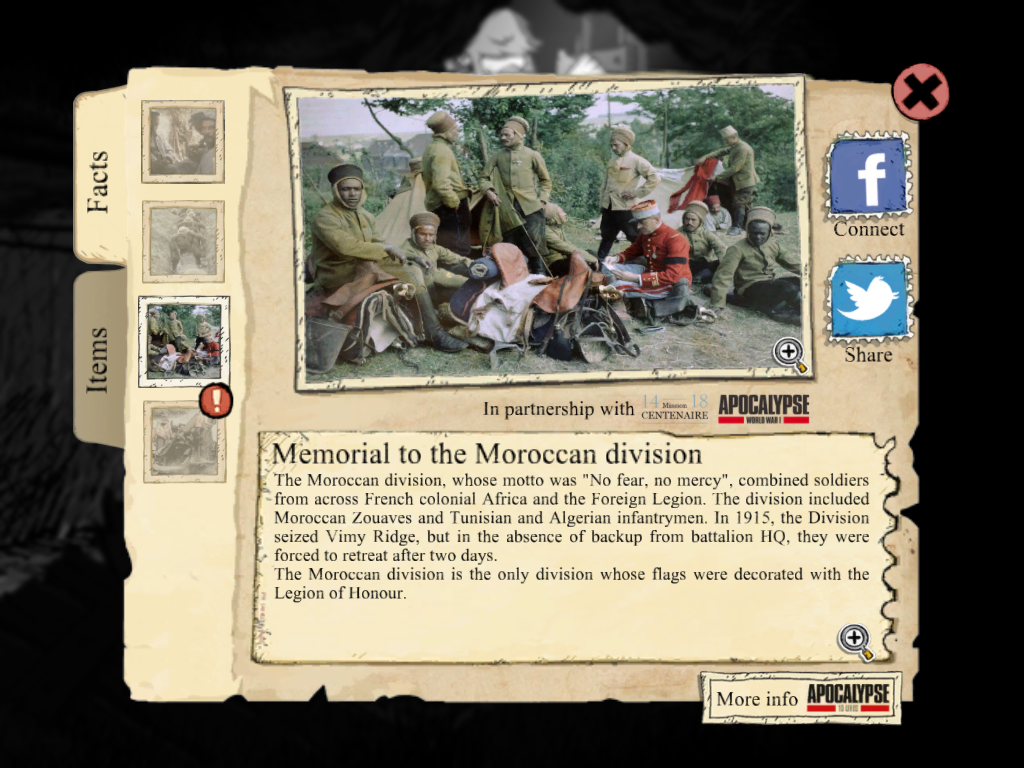 Walt, a faithful Doberman Pinscher capable of fetching empty bottles of wine, pushing levers, and digging up useful items, serves a similar purpose in the game. He endears himself to players by being cute and helpful, but he can also be used to distract enemy guards long enough for you to sneak by or knock them unconscious. French, German, or American, everyone loves dogs, but only you get to weaponize that love.

The game’s mechanics provide other moral and emotional throughlines, too: in one early scene, Valiant Hearts teaches you how to use wheels and valves by having Emile raise the French tricolore over a set of barracks. In the next scene, he uses the same circular swipe motion to pump water for his German captors as a prisoner of war. While most of the plot is delivered by a narrator between levels, Valiant Hearts‘ tone and characterization, its narrative reversals and tragic ironies, are expressed and grounded by consistent puzzles and a limited set of interactions.

Valiant Hearts‘ narrative approach is efficient and sometimes subtle — one image was enough to flesh out Emile’s backstory as a soldier in the War of 1870, for example — but it sometimes lacks clarity and unity. In one early mission, German troops have deployed a machine that belches deadly chlorine gas into a French camp in Ypres, Belgium. Emile goes to investigate, but it’s never made clear whether he should simply dismantle the machine or turn it back on the nearby German troops. Shortly after, Emile sets out to find medical supplies for wounded soldiers, but the section ends with him … firing an artillery shell at a nearby German position. The medical kit is gathered off-screen. 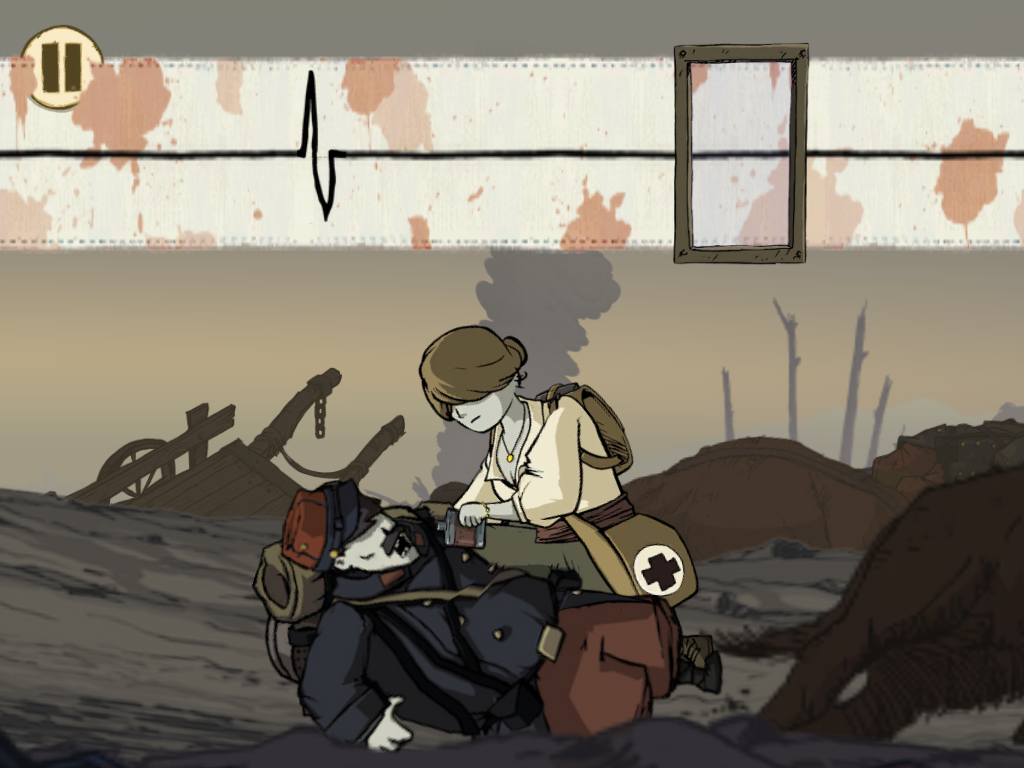 The game’s other hook is that it strives to be authentic, if not entirely realistic. (The game was partly inspired by letters from the trenches, sent by creative director Yoan Fanise’s grandfather during the war.) The game broadly highlights some of World War I’s major campaigns, but Freddy at one point dismantles and entire German position with an empty bottle of wine and some fruit. It’s a fine instance of Valiant Hearts‘ brand of side-scrolling puzzle-solving and rudimentary stealth gameplay, but it begs belief.

Ubisoft Montpelier’s commitment to accuracy and history exerts itself in other ways, but they’re all tempered by Valiant Hearts‘ pervading sense of humor or held back by awkward implementation. The game’s dialogue, for example, ranges from understandable to heavily accented to complete gibberish. The historical facts peppered throughout the game are variously horrifying and heartbreaking, but the way they’re dumped into your journal at the beginning of each level keeps them separated from the more immediate stories of Karl, Anna, Emile, and Freddy, somewhat dulling their impact.

Valiant Hearts‘ depiction of violence is similarly blunted. Parts of Valiant Hearts are heinous — Emile climbs over mountains of corpses during the disastrous Nivelle Offensive on the Chemin des Dames — but most of it is poignant and personal, and you’ll spend more time plucking bird feathers, stealing suspenders, washing socks, putting a dog in a basket, and impersonating a scarecrow than you will driving tanks or amputating legs. 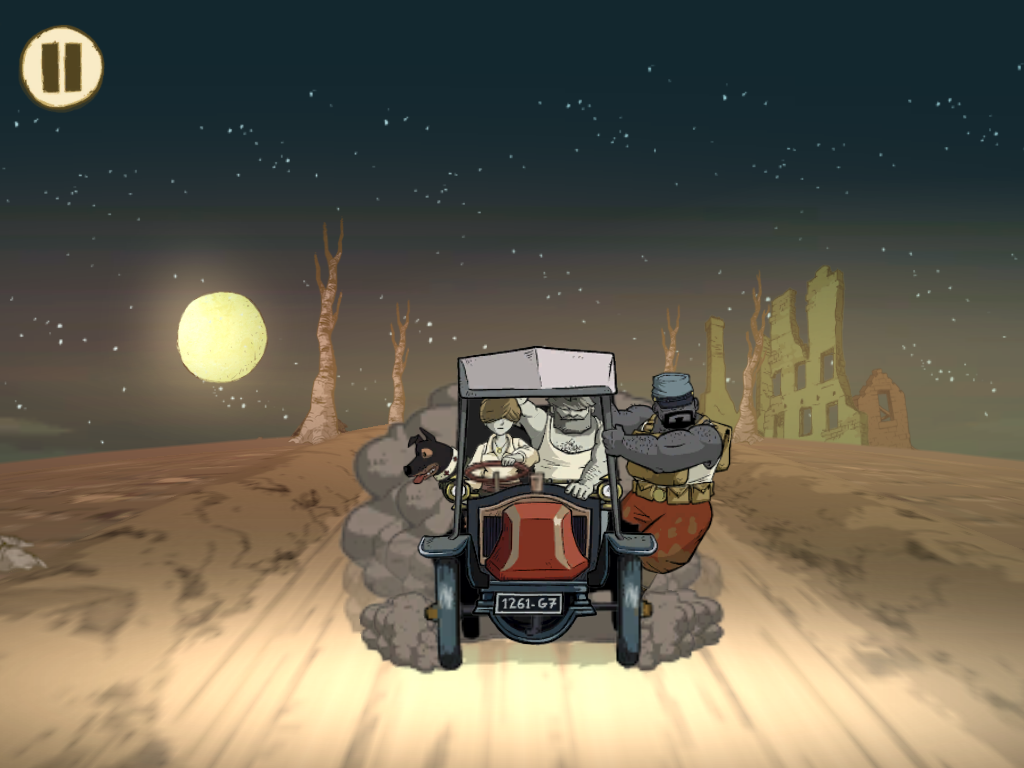 At one point, Anna drives a handful of soldiers to the front line in a mini-game set to Offenbach’s raucous Infernal Galop, otherwise known as can-can music. It seems garish and ghoulish at the time, but the soldiers’ esprit de corps is almost immediately dashed when they reach the Marne. The game’s cheerfulness sometimes threatens to overwhelm its subject matter, but its mostly used as a bulwark against, and an intensifier for, the terror of World War I.

So I doubt that Emile — or Freddy, or Anna, or Karl — believe in Owen’s “old Lie": having seen Verdun, and Reims, and Vimy Ridge, they’d rather live for each other than die for the fatherland.