Let me cut right to the chase, for once. Tactics Maiden (Free), the latest strategy RPG from Mangobile, is basically the next game in the Kingturn RPG series. It’s a new story in a new world, and there are some small differences in the gameplay systems that have a pretty big ripple effect in places, but it’s very similar in most respects to the developer’s previous games. As such, if you enjoyed any of the Kingturn games, you can safely dive into Tactics Maiden, confident that your money will be well-spent. If you tried those games and didn’t like them, it’s very unlikely you’ll feel differently here. If you’re not familiar with those games, you’ve got some reading ahead of you.

Tactics Maiden is a turn-based strategy RPG along the lines of games like Fire Emblem, Shining Force ($0.99), and Final Fantasy Tactics ($6.99). Each of the game’s 85 scenarios sets you against your enemy on one of a variety of map layouts. As your characters perform actions and takes out opponents, they’ll gain experience points, level up, and learn new skills that they’ll carry forward into the next scenario. You can earn items, equipment, and silver in each scenario that you can use to improve your existing characters and hire new ones. Each scenario runs from about 10 minutes on the short side up to an hour for the more complex ones, and although the game offers a variety of difficulty settings, you’ll probably find Tactics Maiden to put up a bit more of a fight than you might be used to in this genre. 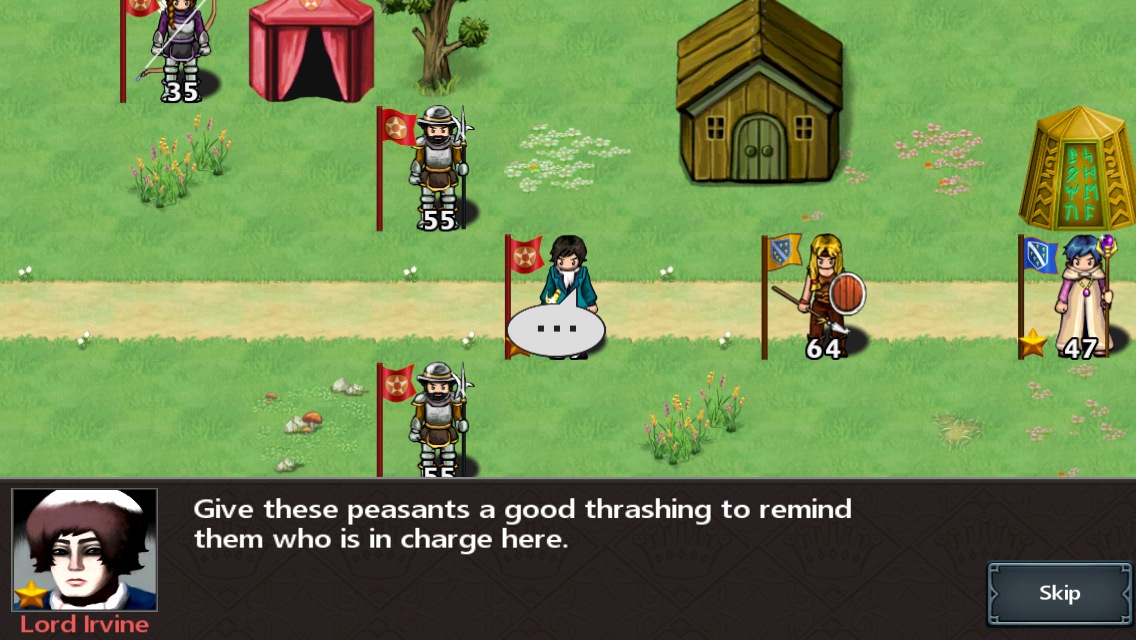 The initial free download gives you the full tutorial plus eight regular campaign missions. After that, if you want the rest of the game, you can buy the game’s one IAP, a $4.99 unlock. Considering the game runs well over 30 hours, if you happen to like what you play in the free scenarios, that price is peanuts for the enjoyment the full game will offer you. The game only gets deeper, more strategically engaging, and more fun as it goes along, too. The story, which barely gets cooking at all in the free scenarios, picks up nicely and while it’s not going to dethrone Final Fantasy Tactics, it’s still interesting enough to keep you coming back to see what happens next.

What I love about Mangobile’s strategy games is that they don’t feel exactly like any other fantasy-based strategy RPGs. There are lots of little reasons for that, but the two biggest ones really set the character of their work. First and foremost, the enemy AI is very clever. It can be tricked, but far less often than you’re likely used to. Even on lower difficulties, the CPU will usually make smart moves, so if you think you’re just going to Conan your way through the game, you should probably disavow yourself of that notion immediately, unless you want to hear your own lamentations, of course. That aspect plays heavily into the second signature of a Mangobile strategy RPG, which is the battle for territory. In a lot of games in this genre, it’s usually a decent strategy to find a chokepoint you can build a little trap around and wait for the enemy to come to you. This kind of defensive play works very well in games like Fire Emblem, and also has the pleasant side effect of mitigating losses which may or may not be permanent, depending on the game. 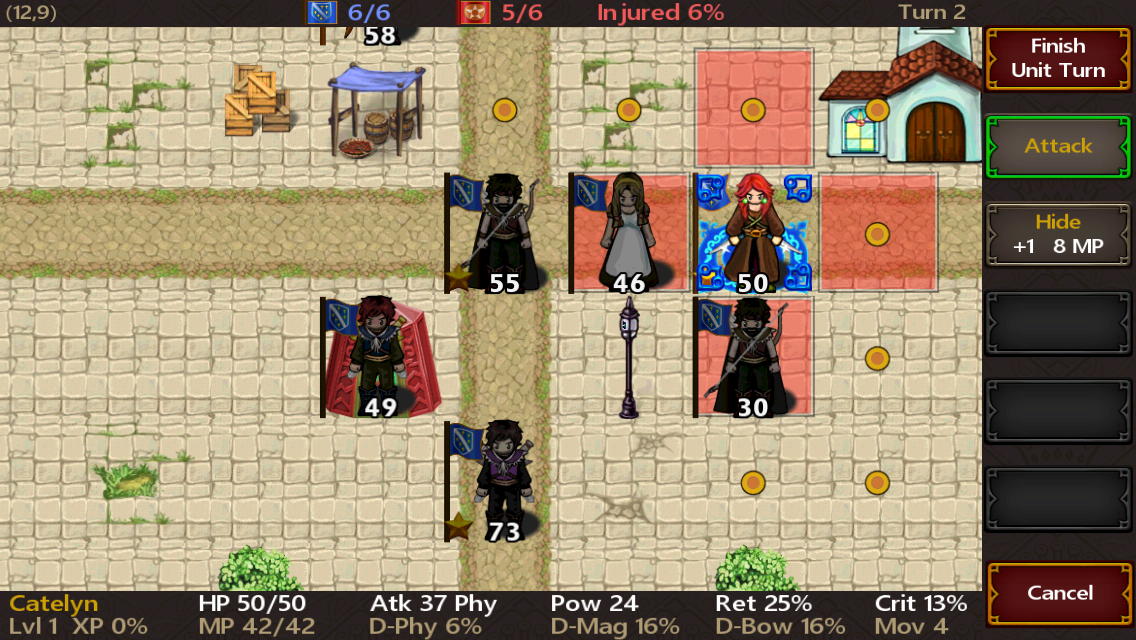 Mangobile’s approach is different, and the result is a game with a very different tempo. Simply put, if you play defensively in Tactics Maiden, you are probably going to lose. There are two special types of square on the play field that you need to constantly work towards capturing and controlling if you want to pull out a victory. The first type is the outpost, a structure that allows you to deploy troops. You have to have at least one to send anyone out on the battlefield, and if you lose your last character without an outpost in your control, you lose. Capturing outposts deeper into enemy territory is of major strategic importance, as is keeping at least a rudimentary defense of your own. The scenario isn’t really over until you’ve captured all of these points, generally speaking.

The other type of special square is the pillar, and controlling these is the real key to victory. For each one you control, you can field one more fighter on the field at one time. If said pillar used to belong to the enemy, not only can you send one more fighter, but your opponent can send out one fewer. Strategic use of your resources can overcome unfavorable odds in the short term, but over time, if your enemies outnumber you, you’re not going to win. You’ll often start scenarios with fewer fighters than your foe, and the first order of business is to even the odds by capturing some pillars. The enemy AI is quite aware of all of this, and will fight tooth and nail to capture and control these special squares. This results in battles of attrition where even the smallest miscalculation on either side’s part can flip the whole equation. It’s incredibly thrilling, though it requires a lot of patience and careful planning. 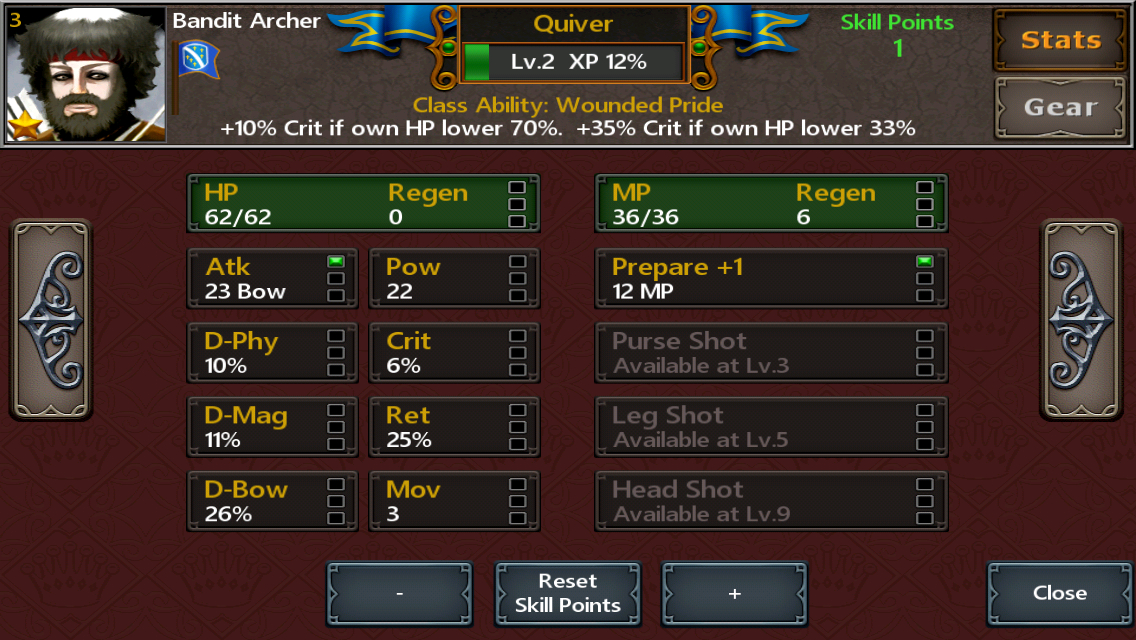 As in the Kingturn games, defeated characters are simply taken out of action for a set number of turns before they can return to the fight. This relatively light penalty for death helps reinforce an offensive mindset towards battles, though each death sends the character to the bench for a slightly longer duration, so you don’t want to be too reckless. As another bonus for the aggressive player, the way the enemy respawn system works has been changed around so that the more enemy heads you bash in, the fewer will respawn. While I’m getting into the differences, I should also talk about the new rules for retreating. If you lose a fight in Tactics Maiden, you get nothing for your troubles. This obviously makes the prospect of retreating more attractive, but don’t think you can just hit the eject button willy-nilly the way you could in the older games. You have to pay a silver penalty when you retreat, and the deeper you go into the game, the higher that cost is. You also don’t get to keep anything you found in treasure chests, but you do get to keep anything you looted and the experience you earned. Retreat is sometimes the smart option, but you’ll have to weigh it over carefully.

There are lots of other little changes, but going over all of them would bloat this review to an insane size. The information is readily available at Mangobile’s site, so if you’re a veteran Kingturn player who really wants to know every last detail, you should probably go check it out. The main point, I suppose, is that Tactics Maiden is more of a refinement than a revolution, which is just fine in my books, since Kingturn‘s gameplay was already excellent. The big thing that the older series tripped up on was in its presentation, and it’s clear some work went into making sure Tactics Maiden fared better in that respect.

The game is now played in landscape orientation only, and the graphics have a lot more detail to them. Some of the art is still a little bit odd, but overall, this is a pretty nice looking game for what it is. The music, as you might expect from previous games, is excellent. The dialogue and storytelling can be kind of wordy and badly-paced at times, and there are more than a few little mistakes to be found, but it’s not a major problem by any means. If things are moving too slowly for your liking, there’s always a skip button you can tap. The UI is a lot better this time around, too, allowing you to easily zoom in and out, map special skills as default attacks, and view the status screens of your various characters.

There’s so much more I could go into, but you can easily download the game for free and check things out yourself. Tactics Maiden is an excellent strategy RPG that any fan of the genre should try out. It’s not terribly different from its predecessors, but it is a better game in every way, and that simple fact means it’s among the best in its sub-genre on iOS. Apart from further improvements to the presentation and better pacing in the writing, there’s not much more you could ask for here. If you want to read other impressions or talk to the developer, be sure to check out the thread in our forum. The game has already got a pretty good following there, and it’s easy to see why.