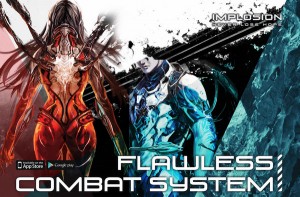 The 2014 Tokyo Game Show just wrapped up over the weekend (with a surprising amount of cool mobile stuff, be sure to check out our coverage of the event) and it got me thinking about last year’s Tokyo Game Show. That was where developer Rayark, who so far have released the excellent rhythm games Cytus and Deemo on iOS, announced a stunning-looking 3D character action game for mobile devices called Implosion.

It featured a slick sci-fi look, killer graphics, and fast-action combat that had me instantly excited for its release. A couple of weeks later, a new video showed more of the game in action as well as how it controlled on the touchscreen, and that video just fanned the flames of excitement for me. All the while Implosion has only been given a vague “2014" release window, and for quite a few months after those initial videos it was fairly quiet on the Implosion front. Then this past July, Rayark released yet another new video (embedded below) showing off Implosion in its latest form as well as announcing support for MFi controllers in the game. Which is great and all, but… let’s release the game already, eh Rayark?

Well, sadly, it looks like Implosion isn’t going to hit that 2014 release window, as in a new interview with Taiwanese gaming site AppGame.com [Translated by Google] Rayark reveals that they’re now targeting a January 2015 release for Implosion on iOS and Android with more platforms to follow after that.

Delays are a bummer for sure, but in the end, I’d always rather wait a little longer for something I’m excited for to be ready to go rather than have it rushed out in a form the developers aren’t happy with just to hit an intended release date. The extra time is bound to make Implosion even better, and per the dodgy translation of the interview, Rayark hopes that the game will “become the flagship of ARPG type of game" on the mobile platform.

If any new information about Implosion surfaces before January we’ll let you know, and until that time be sure to check out discussion of the game in our forums.