Most people know by now that we’re really big fans of Foursaken Media’s games. For more than four years now, this team of four brothers has been at the “four"-front of smashing together different gaming genres into one cohesive and entertaining experience. Their latest release Phantom Rift ($0.99), which has long been billed as “Mega Man Battle Network meets Bastion“, is possibly their strongest effort so far. It, like their other games, blends together different gameplay aspects into a single package, topped off with their signature love-it-or-hate-it art style (I love it just FYI). Phantom Rift, with its moody lighting and shadow effects, looks especially striking. 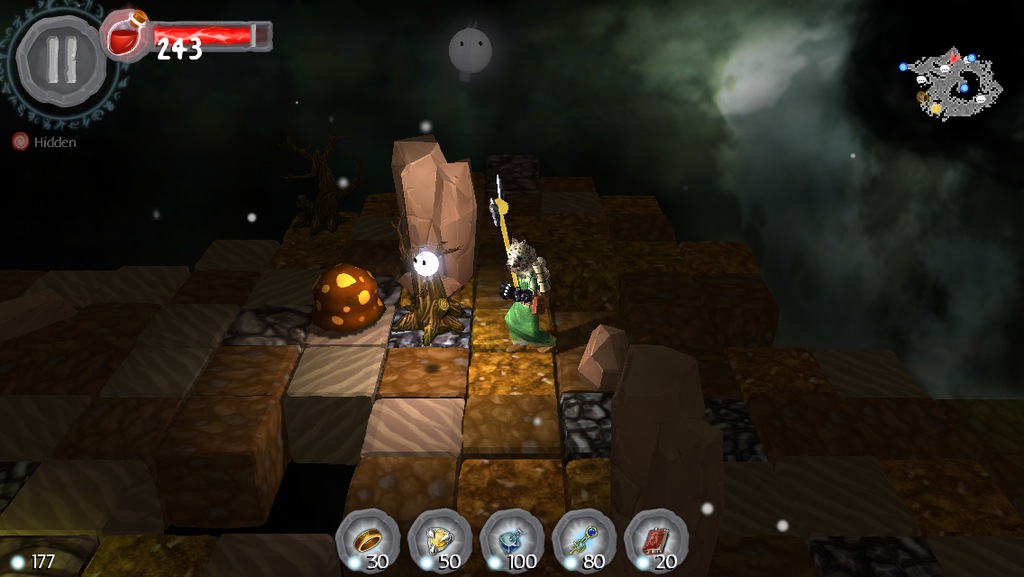 The thing that really stands out to me about Phantom Rift is just how unique it feels. Now, I’ve never played a Mega Man Battle Network game, so maybe I’m just late to the party. And according to the impressions from people in our forums, Mega Man Battle Network veterans should feel right at home with the combat in Phantom Rift. But for a newbie like me, the combat is just exhilarating. It’s sort of quasi-real-time combat, as you blast out offensive attacks towards your enemies in real-time, but the battle pauses while you sort through your bag of spells every few moments which gives you time to plan your strategy. It’s both fast-paced and requires a lot of forethought, which I enjoy very much.

The other cited inspiration for Phantom Rift is Bastion, but here this is mostly due to a visual design choice. As you walk around the worlds in Phantom Rift and engage in battles, the ground literally appears beneath your feet in tiny chunks, just as the world unfolds in Bastion. It’s possible there are some other, smaller inspirations that were also taken from Bastion, but by and large it’s really just a visual thing. Which is totally fine, but good to understand for setting your expectations appropriately.

Of course, another hallmark of most of Foursaken’s games is a crazy amount of depth when it comes to character customization and upgrading. And that’s really what Phantom Rift is all about. Your beginning character is a blank slate, and despite the game starting your character out in a certain direction based on some questions it asks you, there’s really nothing stopping you from taking a character in pretty much any direction you want using different types of equipment and spells.

If you were a MMBN noob like me and this all sounds interesting to you, give Phantom Rift some consideration, it’s totally taken me by surprise. If you’re a MMBN veteran looking for a similar fix on iOS, well, you know what to do too.