My thumbs are feelin pretty raw after playing Goblin Sword($1.99). As a guy that grew up playing platformers in the late 80’s/early 90’s I don’t think I can give higher praise for a game workin’ it’s tail off to give that old feeling back. Unforgiving yet short levels give this game a mobile focus while still retaining that frustrating level of difficulty we all had a love hate relationship back then. Gelato Games has hit all the selling points square on the head with this retro title. With controls better than Swordigo(Free), and more sophistication than Dodo Master($0.99), Goblin Sword is setting the bar nice and high for it’s competition.

If you scroll down to the comments section, you probably won’t find complaints about racing games, puzzlers, rpgs, or sports sims. What you might find, as I have been finding recently, is a vocal minority complaining about pixel graphics games. Now I don’t mind critical evaluation of a video game[thats kind of what I’m doing here in the first place], but what I don’t understand is blind dismissal of an entire sub-genre of games. A lot of people like pixel art retro games. They pay money for them. Complaining about it’s existence amounts to yelling at clouds, sure its fun but you aren’t going to see much change because of it. You could just throw out the labels and just let this game stand on its own. In fact, lets get a Billy Joel quote in here to see if we can set the tone to do just that:

What’s the matter with the clothes I’m wearing?
“Can’t you tell that your tie’s too wide?"
Maybe I should buy some old tab collars?
“Welcome back to the age of jive.
Where have you been hidin’ out lately, honey?
You can’t dress trashy till you spend a lot of money."
Everybody’s talkin’ ’bout the new sound
Funny, but it’s still rock and roll to me 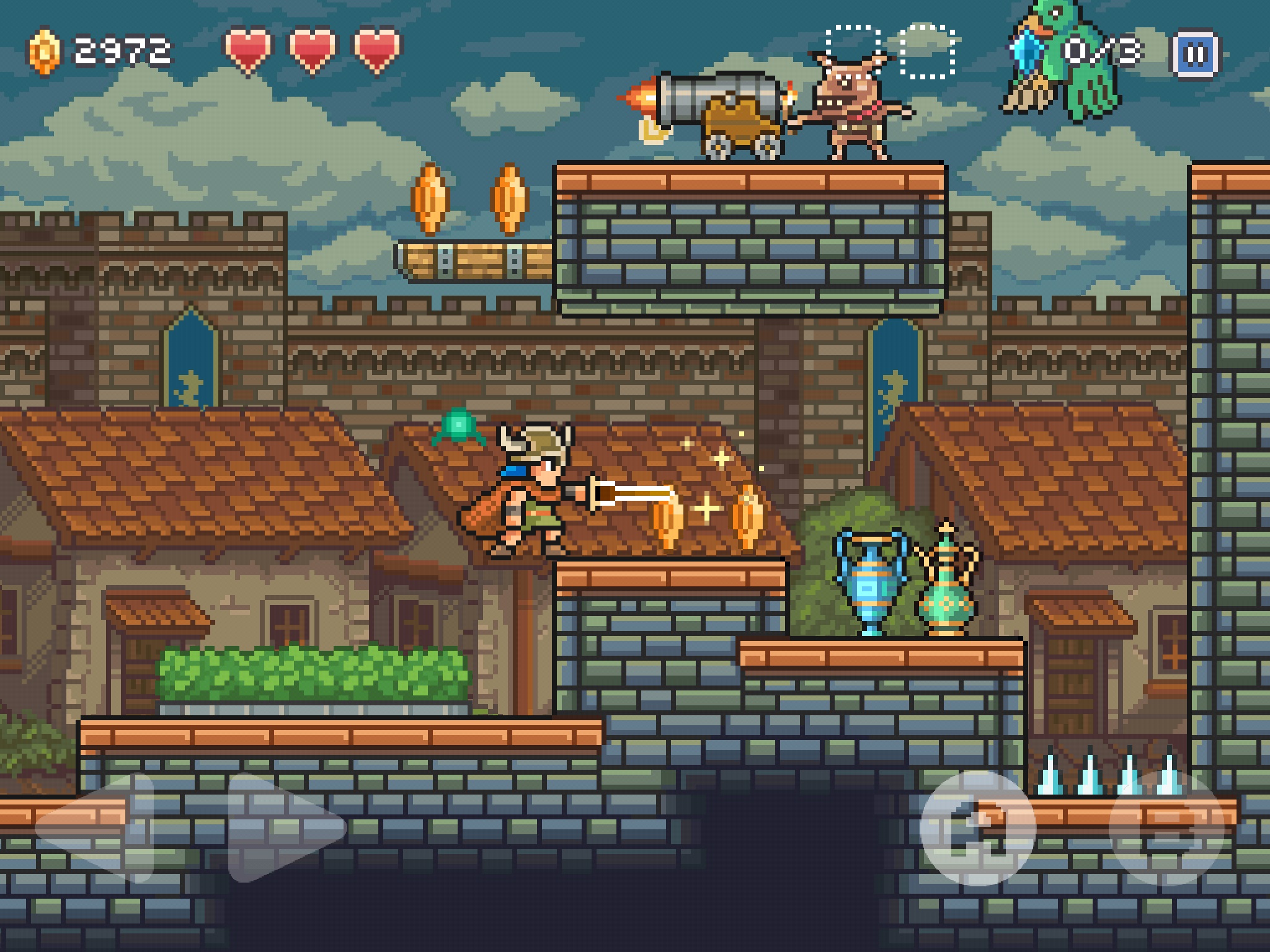 For the scoffers and haters that don’t want to see more retro games, Goblin Sword is one of your worst enemies cause this game rocks. Controls, level design and audio quality are all on point and set up a fantastic feeling world for you to explore. I have to admit even the splash page with the Goblin Sword graphic is fantastic, evoking nostalgia from the moment you load up the app. What follows is a treasure trove of a platformer waiting for you to pull out a great experience. The game has no IAP and the normal $1.99 price is theft for what you get. Gelato Games is doing you a solid on top of this, however, by putting the game up at half price for a limited time.

Like most platformers, levels consist of enemies to defeat, pitfalls to avoid, and treasures to collect. Unlike most platformers, you can discover and purchase weapon and item upgrades that are both functional and cosmetic. Suits of armor are on the cosmetic side, while trinkets are functional. Weapons dip into both pools with a variety of animations, stat lines, and even unique spell effects. As previously mentioned, some of these can be purchased from the store. Others must be found, and provide a big chunky carrot to chase while trying to clear 100% of each map’s loot. Another big reason to do full clears of maps is that each area you can adventure to has additional content that unlocks after everything is cleared. On top of that, there is an unlockable alternate game ending. Did I mention that this game is $.99 right now? 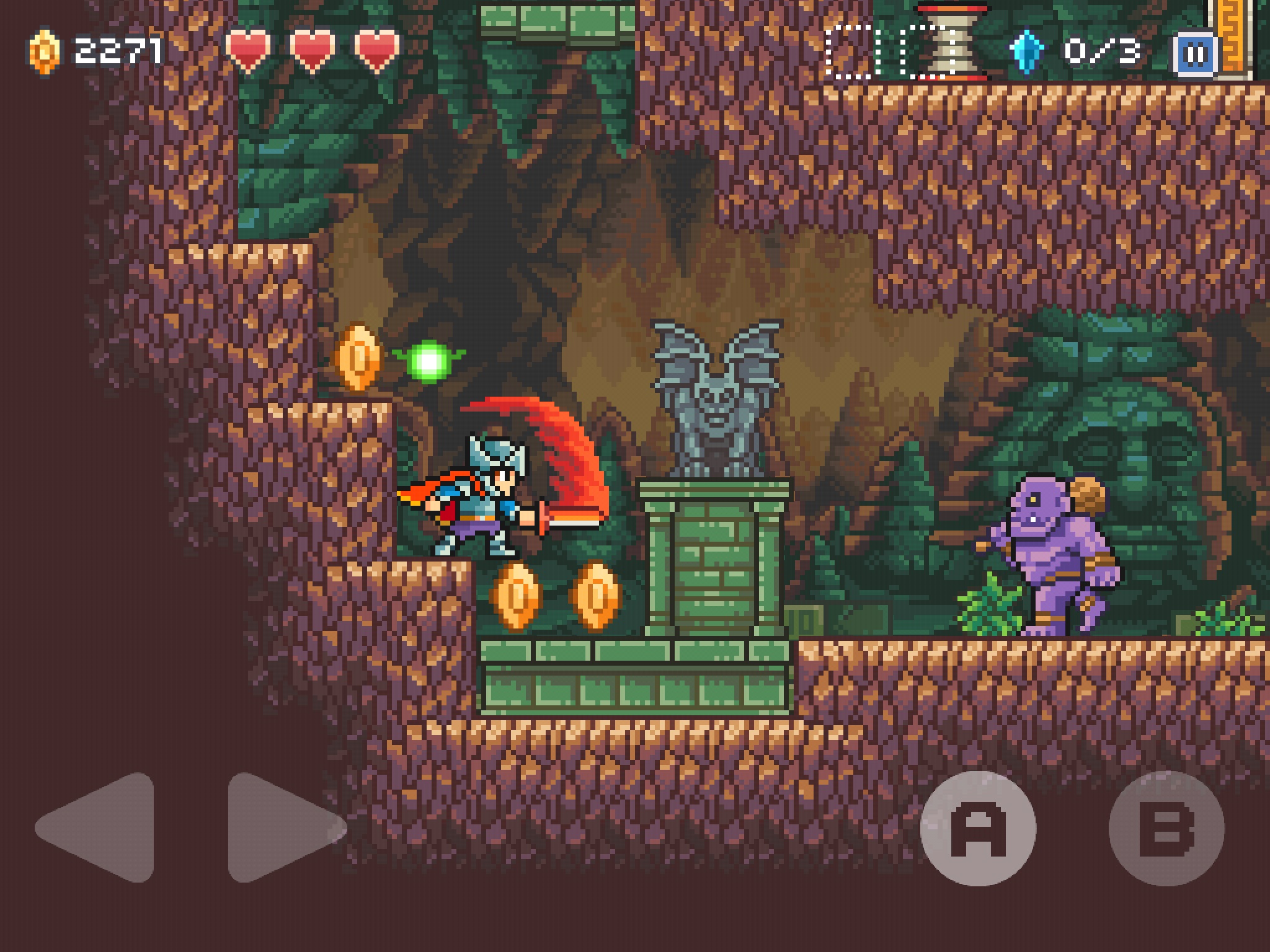 Overall difficulty is well balanced, at least to my ability. Getting through most levels means multiple play throughs, but really finding everything a level has might mean a dozen or more trips in total. If you are feeling really stuck, I would highly recommend a trip to our active thread in the forums for some tips. Tougher levels are pretty grueling, requiring some pattern memorization as well as concise inputs. While you may end up dying an embarrassing amount of times, the quick reloads and great continuous music always seem to help me get back on the horse. The game is pretty good at putting you in situations that demand patience and practice. Most enemies have attacks that will trigger as soon as you step within sight of them. Traps and moving platforms will only give you small windows of safety. This is pretty typical platformer stuff, but most games don’t have it all bundled together so well.

The only annoyance I have experienced so far is that the virtual controls for the A and B buttons are a little to spread out and don’t seem to play well if you manually adjust them. Not to fear, however, because we have gotten reports that the developer is working on this very issue in the next update. I guess you can just add “well supported app" to the long list of things I love about this game.

I feel like if you were going to buy Goblin Sword, you’ve already done it. It’s such a crazy value and has such good production quality it kind of speaks for itself. I’ve managed to beat each of the boss fights, but I still have a ton of replay value left to get out of the game. What is exciting is that the story line isn’t over just by beating each level, and neither are the upgrades and unlocks. If you haven’t taken the plunge and you like platformers even a little bit, this is the game to get. Now I’ve managed to stop playing long enough to type this review, but its really time I get back to it.