I have a very simple wish. I don’t think I’m asking for all that much. I want Etherlords (Free) to be the vanguard for the death of energy systems in free-to-play RPGs. We’ve seen a rise in these kinds of games that make game design purists recoil in horror – ruled by automated battle systems that don’t always work in favor of the player. But here’s Etherlords, which at least has the decency to let the player play as much as they want. Oh, and it’s also a puzzle game with battling that’s really just incidental to the whole experience.

Etherlords features 3-on-3 combat that is mostly automated, between creatures with different special abilities. Combat is automated but not stupid: characters attack the enemy they’re directly facing, or the closest enemy if the enemy in their lane is dead. After every character has made two attacks, it’s possible to deploy one of the characters’ special abilities, which can do larger amounts of damage, heal, and/or provide other buffs. But it’s also possible to switch lanes, which can provide a strategic advantage, but also allow for characters to land on elemental tiles that pop up, increasing the effect of their abilities. 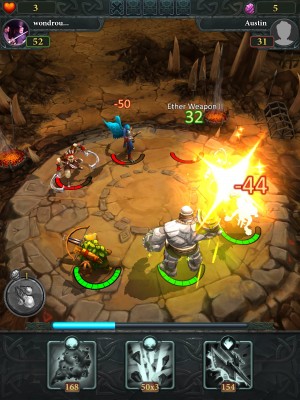 What’s curious about the structure of the whole game is that really, the battling is just there for the world-building puzzles that fuel the advancement of the game. Each world has a rough layout and a mission to form certain quantities or sizes of a land type. The tutorial doesn’t make much sense, but the system starts to make sense over time. There’s only so many tiles that can be laid down in a world before the failure condition sets in. The battles are just ways to get more matter to lay down tiles and to swap matter tiles in order to craft the perfect match. And since there’s no persistent damage between battles, the only thing stopping players from fighting as much as they want to get as much matter as they need is pretty much just one’s attention span.

Really, the fights could be replaced with anything. Imagine a basketball game where you play as a player trying to rebuild basketball courts, and you have to sink free throws to get more tiles. That would really not be much different than the loop that Etherlords deploys! Completing the levels does require beating a challenging boss fight, which is much higher of a level than the normal fights, which does encourage using the boosts. That’s pretty much it in terms of the importance of the actual battles. 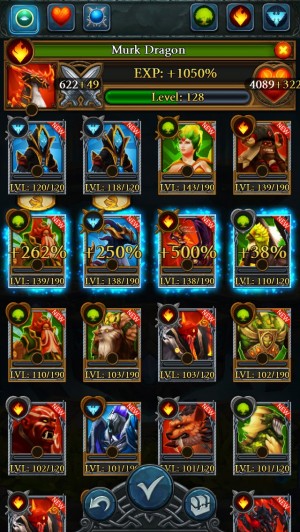 Performing efficiently or making large formations in the world-building helps gets extra creatures, which is where the monetization starts to roll in. See, upgrading creatures requires fusing them with other creatures to boost their experience. Thus, playing to get other creatures is important. Creatures give smaller returns on experience over time, so it doesn’t hurt to level up smaller creatures to serve as feeders for the bigger creatures. Unfortunately, because there’s no way to earn experience in battles, this can promote playing with conservative lineups, especially if a powerful lineup is made and groomed early on – it takes conscious work and effort to build up new creatures.

Now, fusing these creatures costs ether, which is earnable by playing the game, but can also be bought. But because there’s no energy system restricting play, if you want to just play old worlds over and over again to stockpile it and the creatures necessary to progress at the rate you desire, well, you can do that. And the game doesn’t suffer for it. If you want to pay for more ether to do more fusing and to buy more turns, well, that’s an option too. And there’s the creature booster packs if you want better creatures right away. I’m not going to say that grinding won’t take a while, but it’s definitely an option here.

And having a free-to-play RPG where that’s an option is welcome. Too many of these free-to-play RPGs throw one too many walls in front of the player and their enjoyment of the game. Etherlords is a game that can be enjoyed for hours on end if so desired! And its combat manages to be simple but not stupid. Plus, that puzzle-centric world-building? It’s confusing but clever. Undoubtedly, there’s plenty of systems to entice the player to spend the money – why make playing the actual game one of them if it isn’t necessary? And the game ain’t half-bad looking either. As far as free-to-play RPGs go, Etherlords is well worth it for the curious.