If Percy Jackson found himself in the Paper Mario universe, he might be playing MUJO(Free). Finally seeing worldwide release, MUJO has had about a month in soft release to tighten up it’s loose ends. Audio and visuals are clean and enjoyable, and while I never thought I would describe fighting a medusa with cheery music as a cohesive theme, it is. I think we all know that match three puzzle games have gotten a lot of exposure, and I don’t think we have really seen a lull in the stream of saccharine inspired clones either. With that said, there is enough innovation with this game to warrant a closer look.

MUJO combines the stacking tile gameplay of Threes($5.99) with the match three character levelling system of Puzzle and Dragon(Free). There is something scary to me about that last sentence, especially since I ended up staying up a few hours past my normal bedtime last night playing. Most match three games give you the ability to swap tiles or even diagonally chain them together. MUJO does not do this, but forces you to plan out your matches ahead of time a little more. The level of complexity is just enough to be a solid hook to keep focus on the game while you try to preserve your large stacks. Large stacks are the key to beating levels, unlocking better characters and life in general. The biggest threat to your stacks are bombs that will intermittently spawn. Pushing a bomb off the map will trigger an explosion that wipes out all tiles in line with the bomb, vertically and horizontally. As levels progress, the amount of bombs increases as does the HP value of your opponent, forcing you to stack higher and be more and more careful with bomb avoidance. 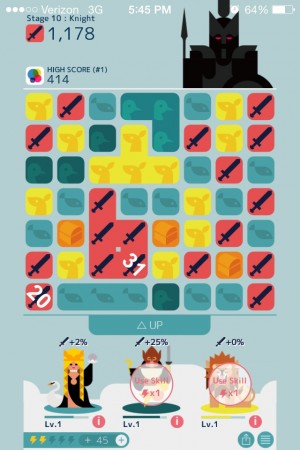 As a paid app with IAP, I have not found the purchase options to be overtly obnoxious or even neccessary at all. You get a bundle of about 50 IAP currency(they are called lightning bolts in MUJO) for free at the onset of the game and 5 free each day that do not count towards your total amount. I haven’t found a use for them that I really enjoy so they are for all intents and purposes completely optional.

Characters have a wide array of abilities and strength boosters. I have to say that at this point, the abilities are pretty lackluster. If you want to activate any ability, you must spend a lightning bolt. Another annoying bit about the abilities is that most of them have a cool down time that are around 100 rounds, which seems really long for a single use ability that burns currency. So my favorite hero so far is Herakles, since he is just a flat strength boost and has no trigger ability. The cost and cooldown of abilities is probably the biggest downside to the game and something I hope can be improved upon in future updates. Since the soft release in July, the game has gotten some solid updates including the soundtrack. At the moment I think there is still a good chance this aspect of the game could see a facelift.

Levels manage to stay interesting with new enemies interspersed between the bog standard soldier enemy, but you wont find any type of story line or questing system here. Like Threes, the big appeal is building a bigger stack. With MUJO, the challenge is not in pattern recognition so much as patience and being careful to never endanger your stack. In the meantime, stacking chests for better heroes is a nice side-attraction that provides a nice carrot for when you start to get bored of advancing through the levels. Because the game is a hybrid, it’s hard to tell exactly what the expected level of story depth is, but in either case I wouldn’t pick this game up for story or lore purposes. It is strictly a puzzler with light rpg elements.

MUJO is not a AAA big studio title. It is not a story driven epic adventure. If you are still reading and interested, I think the game will appeal to you. One of our editors, Mr. Eli Hodapp, described a game the other day to some of us writers. He said that the game was pretty fun after playing it for a few minutes, not amazing, but fun. When he looked up at the clock, an hour had passed since starting up the app. This is pretty much exactly how I feel about MUJO, its a nice light puzzle game that will steal time away from you without giving you even a suspicion that you are wrapped up in it.