Of all the many complaints I’ve levied against the games released by Candy Crush Saga (Free) publisher King, one I haven’t been able to make up until now was that their games lacked polish. A whole lot of that is owing to their relatively simple nature, but nevertheless, King games were generally bug-free and ran well enough. Their games don’t typically suck a whole lot of battery power and are pretty good for filling in those gaps in the day where you want to play something without paying much attention. I could say all of that stuff until now, with the release of Diamond Digger Saga (Free), a battery-hogging, crash-prone game that in its current build has one of the worst kinds of bugs: the type that steals away your premium currency. Unintentionally, to the comedian in row three of the comments section.

Diamond Digger Saga is another puzzle game from King, and as usual, it’s less of a creative excercise and more of an iterative one. This time, the most striking similarity is to one of their previous games, Pet Rescue Saga (Free). It’s dressed up very differently, but at its heart, it’s quite similar. You have a field full of different colored pieces, you can touch groups of three or more to remove them, and the remaining pieces will shuffle downwards in their place. Levels usually span multiple screens, here with separated rooms rather than a straight drop down, and you have a variety of stage types with different goals that you need to accomplish. Get enough points and you’ll earn a three-star ranking. 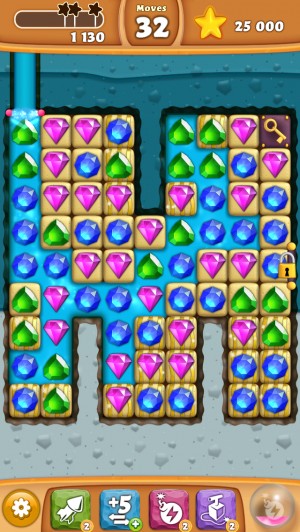 Of course, it’s not a one-to-one match with that game. The big difference here comes in the flow of the water, whose reach determines which items you’ve collected and when you’ll move on to the next screen. Each screen has an exit and once the water touches it, you’ll go to the next screen, whether you wanted to or not. With certain stage goals, like the basic score challenge, it’s not a big deal, but most of the stages require you to collect a certain amount of something, and moving to the next room too quickly can cost you the round. The water starts from the entrance and will flow anywhere it’s not blocked by dirt or stones. Making a match on dirt or stone blocks will clear them, so you can sort of set up your path.

Although it has many similarities to Pet Rescue, it’s actually a lot less frustrating. That game had a nasty habit of letting you get to the very end of a stage before allowing you to realize you couldn’t win. Diamond Digger Saga will inform you immediately if there aren’t enough of an item left to clear the stage and stop you short. Even as you enter a room, if the collectibles are critical to your goal, the game will remind you by marking them. On top of that, you even get an easily charged power-up you can use at your discretion. Make enough matches and you can unleash a bomb that removes all pieces of a color of your choice. It’s unusually fair for a King game. Yes, I know, I say that a lot, but they really are getting better about this over time.

Naturally, some things haven’t changed. You still get a limited number of tries before you either have to wait for a timer or plug in some premium currency to keep going, the difficulty level is quite high once you get past the opening couple of dozen stages, and all of the most useful power-ups are going to cost you. As usual, after completing a certain number of stages, you’ll run into a gate, and the only way past is to wait out a 24 hour timer, ask three Facebook friends to help you, or plug in some premium currency. As in other recent King games, you’re given enough of this currency to get you past five or so gates, but after that, you’re on your own. This is where I ran into the bug that bit me hard, though. 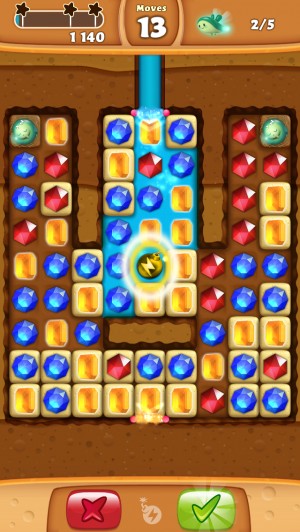 When I review King games, I always use that initial currency to blow past the gates, because I don’t like bothering my largely non-gaming Facebook friends and waiting out a timer isn’t good for review purposes. So I chose the option to use my gold to pass the gate, and nothing happened. My gold was removed, the gate stood. I put in more gold, just to see what would happen, and again it took my gold and left the gate. Well, I’m a bit of a curious fellow, so at this point, I jammed all of my gold into the gate just to see if it would let me, and it did. The gate still stood. The construction of these doors rivals those you would find in Asgard, my friends. Now, I’m dead certain this is a bug that King will fix quickly, and perhaps even by the time you read this, but it demonstrates that Diamond Digger Saga perhaps didn’t get the twiceover King’s games usually do.

The game is also strangely prone to crashing. I’ve never had a King game crash before, but this one actually went down three or four times. It also sucks battery power like nothing else this side of Monster Hunter, which is a bit weird given there doesn’t seem to be anything going on here different from other King games. If the advantage of King’s games is that they’re easy to pull out during your day and play here and there, having a game use a lot of battery power seems to run counter to that. This stuff soured me on what was a pretty fun, if a bit uninspired, puzzle game.

If those problems get smoothed out, this will probably be one of the better King games. The luck problem of their other recent games, where it felt like you were at the mercy of the random number generator, is either toned down or just hidden better in Diamond Digger Saga. I also enjoyed the challenge of digging out a path to certain items without accidentally opening up the next area. While it’s a small thing, I also enjoyed having a regular-use power-up that I didn’t have to hoard like it was a sacred treasure. Whoever’s taking care of the art design in recent King games is doing a bang-up job, too. Early games from the publisher were kind of creepy and cheap-looking, but their recent games have had a more pleasant and consistent art style to them. As usual, there are already tons of levels, and we can expect regular updates to bring hundreds more, I’m sure.

All the sweet words are for naught if things aren’t working properly, however, and that’s the case right now in Diamond Digger Saga. It’s a bit weird for a game that had a soft launch of a decent length to enter wide release with issues like this. If you plan on playing it now, be careful about spending any premium currency. Between crashes and money-eating bugs, it’s too likely you’ll lose it. Once it’s fixed, I think people who have enjoyed King’s other games will be quite satisfied with Diamond Digger Saga, even if it’s less diamond than cubic zirconium.