I remember when I first saw Mikey Shorts ($1.99). It was the GDC Touch Arcade party back in 2012, and I remember meeting Mike Meade. If I recall, I may have been the first press person to ever see the game. It certainly seemed neat, as pixelly platformers are absolutely up my alley. What I didn’t expect was that BeaverTap Games would make one of the best speedrun platformers on mobile, this side of Rocketcat Games. Then they would duplicate the feat with Mikey Hooks ($1.99), adding in grappling hooks. And lo, was it good. But where would they go from there? Certainly, the ending of Mikey Hooks hinted that jet boots would play a role. And thus we have Mikey Boots ($1.99), the close of a spectacular trilogy that lives up to its predecessors while also being a bit different for a Mikey game.

The core formula is the same: get Mikey, or his new female compatriot, to the end of the level as quickly as possible, without dying. The twist here is that the game’s now got auto-running, with the ability to fly upward with jet boots. Tapping on the left or right side of the screen will fly upward in that direction. While the robots and spikes from the previous two games are still there, there’s new threats to deal with, namely missiles that fly across the screen which must be avoided. Learning when to dodge over and under them, and the other hazards that pop up, is key to beating levels and getting fast times. 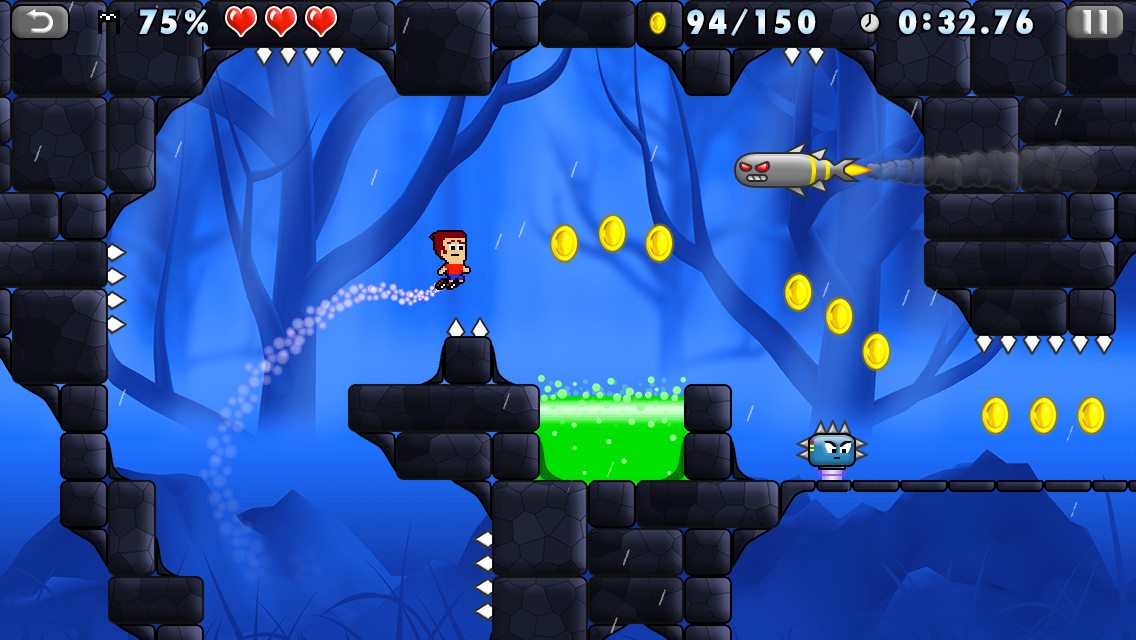 Thankfully, the controls feel immaculate. Whether it’s about flying upward quickly, or quickly tapping to maintain the current height while going forward, you will never complain about the controls in this game. Mikey’s weight is perfectly conveyed while playing, and pretty much any failure is the fault of the player, not the game. Ever. This is especially so since there’s only one action on each side of the screen, it’s hard to mess that up. But there’s MFi controller support as well if you need it.

For the fast time enthusiasts, know that quick turns are of vital importance in this game, perhaps even more so than in any game previously. The rule of constant forward momentum is still there, but fast times will be determined by the turns, and they’re just slightly so different because of the jet boots, as it’s possible to make narrower turns. Just not too narrow, as hitting the lip of the edge will slow Mikey down. There’s also some straight vertical paths to try and contend with every now and then. However, spiked passageways with spikes on top and bottom are the most common threat in this one. 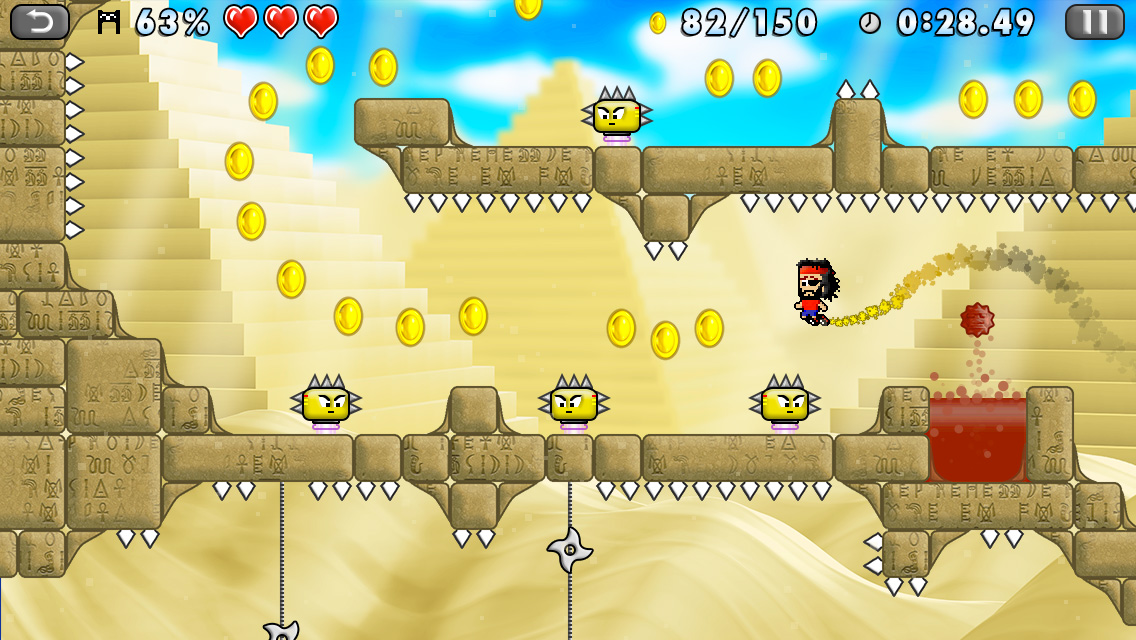 The game features 42 levels, with Game Center leaderboards for each. None of this points leaderboard malarkey, thanks to the expanded count of leaderboards that the games have. Getting three stars on a level is easier than ever, as it’s quite possible to take two hits out of the three hearts and get a 3-star time on most levels. Now, maximizing that time by not taking damage? That’s a challenge, what with everything in the way. There’s still the golden pants to find, with the slightly-obscured alternate paths to try and find. Also, each level tracks if all coins are collected, which isn’t so easy with the auto-running and jet propulsion to deal with. The speedrunner will likely get all 126 stars in short order, the other medals will require some extra playthroughs.

And certainly, it didn’t take much coaxing to get me to try and collect 3 stars on each level. BeaverTap absolutely knows how to make a game that feels great to just play around with. I was a little concerned how well the jet boots would handle, and my concerns were quickly wiped away. The new hazards in each level get to feel a bit homogeneous by the end – there’s only so many times a thin spiked corridor, or barrage of missiles, can come by without it feeling like “I’ve seen this before." But it’s far from a terrible thing, as the game feels like it’s just the perfect length, and I had fun every second of the way. Plus, there’s always the quick restart button for if you screw up. The ghost of the previous best run is still there, and can be customized as in Mikey Hooks. 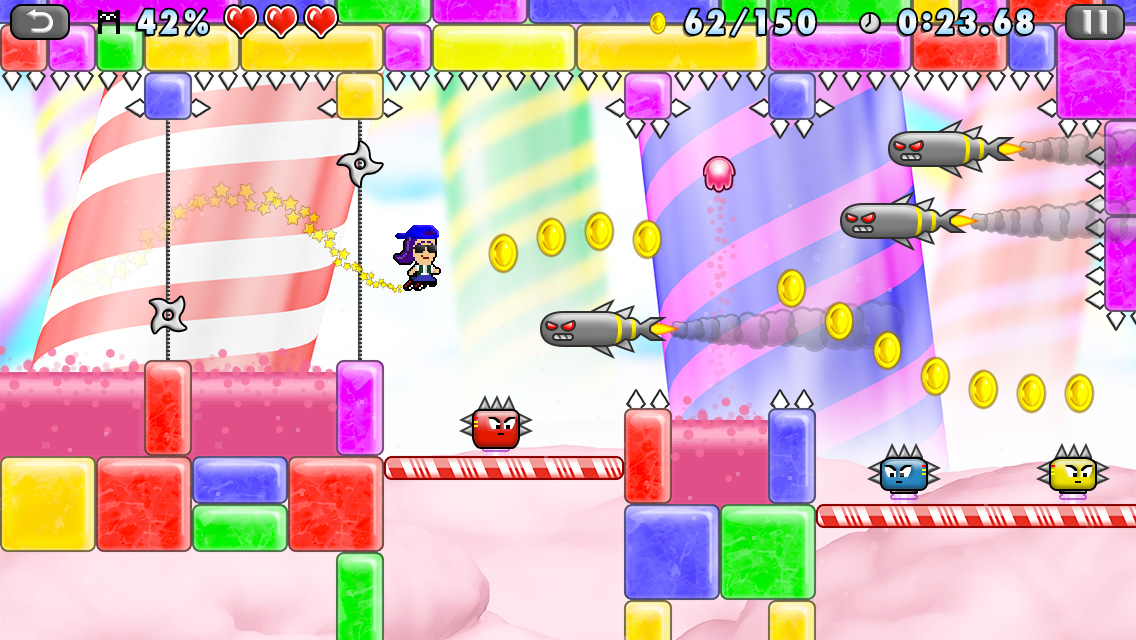 Speaking of customization, there’s a wide variety of hats, eyewear, facial accessories, and now boot effects, that can be outfitted on the character. All the costs are cheap – 100 coins or free for the indie cameos, most of which repeat from the last game, but now include Andre’s hat from Super Lemonade Factory (Free), though no more 10000000 ($2.99) hat. At least it’s still possible to wear the Disc Drivin’ ($2.99) hat. There’s no coin doubler to buy as in the last game, no IAP at all. The retro graphics are available as an option to all. There’s no coin magnet nor extended health bar, gotta collect all those coins and survive the levels fair and square. The game is certainly not easy, but it’s not overly difficult either.

I don’t know if Mikey Boots is the last in the Mikey series, if it wraps up here. It does feel like the formula has been explored to its greatest lengths, as far as how BeaverTap structures their levels and game progression. Perhaps there’s a new mechanic that could be explored. Or maybe it’s time for something new. I’d love to see BeaverTap apply their principles to a totally different genre.

But if this is the last Mikey game, BeaverTap has gone out with a bang with Mikey Boots. This is yet another speedrunning masterpiece that everyone ought to own. BeaverTap are absolute masters of their craft. They know how to make speedrun games that feel perfect on mobile, and Mikey Boots is just further proof of that. Buy this game.