Having just finished my review of the final episode of The Walking Dead Season Two (Free), I thought it might be nice to decompress with a little pinball, as I often do after finishing a story-heavy game. Luckily for me, the developers behind Zen Pinball (Free) just released a thematically-appropriate new table as both a standalone app and an in-app purchase within the regular app. The Walking Dead Pinball ($1.99) follows most of the well-established trappings of Zen Studios’s take on silverball, so it’s hard to say if people burnt out on their offerings will be all that excited with it. For fans of The Walking Dead game, however, it brings just enough of the character of Season One (Free) to make it worth checking out.

The Walking Dead Pinball is a table built around settings and situations from Telltale’s The Walking Dead Season One. As with their other tables, it takes advantage of being a video pinball game to do some things that a real mechanical table couldn’t. Most immediately, that means that you’ve got fully 3D models of Lee and Clementine hanging out on either side of the bottom of the table. They’ll sometimes move around and interact as you perform certain shots, and they both retain their original voices, though I think they’re mostly just clips from the game and not anything new. Other characters appear on the board and occasionally show up in the faux-digital display during certain events. You’ll also hear clips of their voices from time to time. 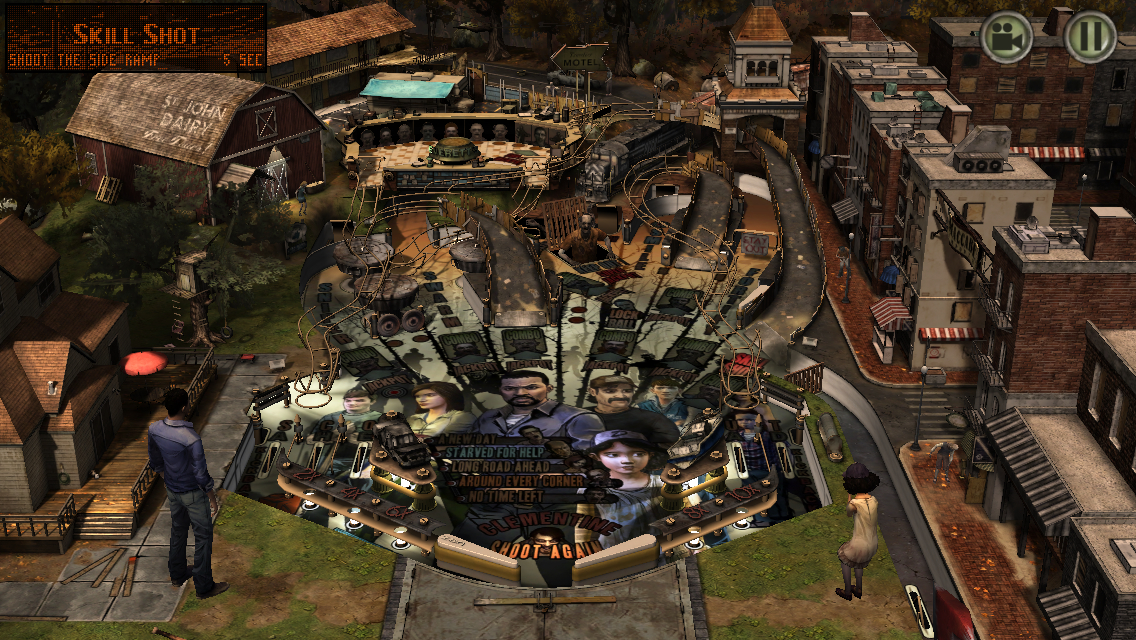 The table loosely follows the story from the game, with certain events prompting you to choose between saving certain characters in a way that mirrors the original plot. There are a number of extra modes you can activate that sometimes leave the confines of the table, such as a sniping mini-game set in the streets of Savannah where you can take out zombies shooting gallery-style for extra points. Each episode gets a unique mission based around it with its own unique goals, and there are a number of other missions based around more general ideas like hunting for food or ammo. There are plenty of ramps and rails to keep the ball moving fast, and an extra play area up in the top left corner with its own flippers. When you lose a ball, the camera zooms in on one of the main locations from the game, such as the train crossing, the motel, or the farm.

You can play in portrait mode or landscape, with eight different selectable camera angles to let you find the view that works best for you. None of this will be all that surprising to regular Zen Pinball players, and the physics follow the pattern. To tell the truth, I tend to favor Pinball Arcade‘s ($0.99) more realistic experience over Zen‘s somewhat loose play, but I still really enjoy Zen Pinball‘s fast, kinetic feel. It’s an odd pairing with what I feel was a pretty deliberately-paced experience in TWD, but it works out okay, even if it’s not quite as innovative as some of Zen‘s other tables like The Avengers. You also get the usual Game Center support for the leaderboard and a handful of achievements. If you want to compete a bit more directly, the game supports hotseat play for up to four players. You can also mess around with an included operator’s menu, but changing anything will disqualify your scores for the leaderboard while it’s active. 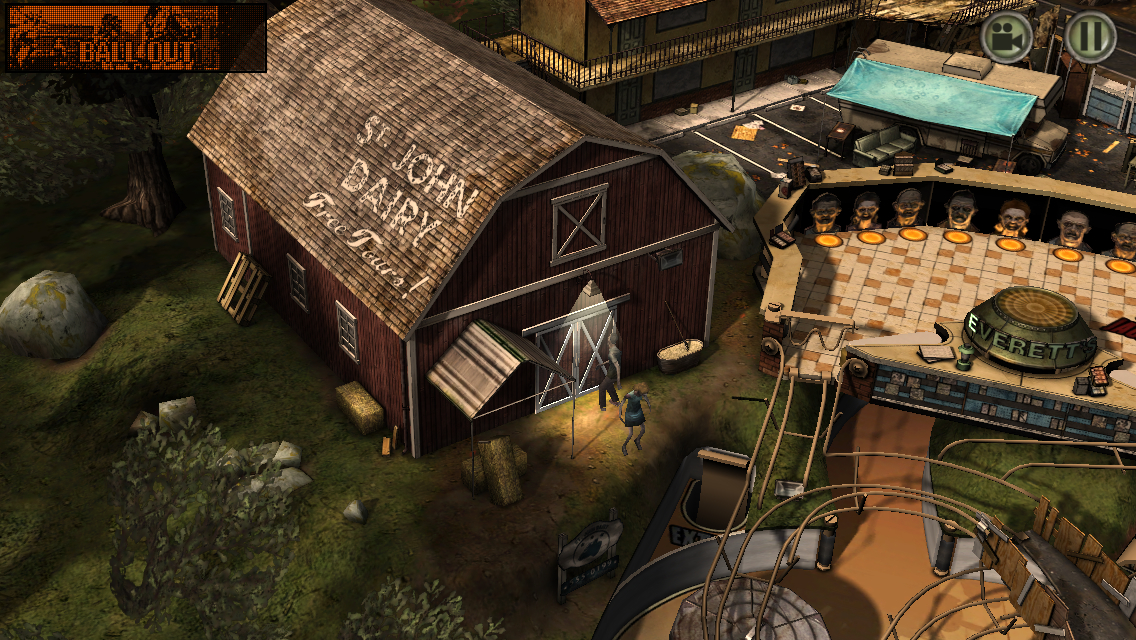 Now, I’ll level with you, I haven’t checked in on Zen Pinball‘s tables recently, but I was surprised to see something kind of unpleasant show up when I sank all of my balls the first time. The game prompted me to spend a token to continue my present game. These tokens are available as IAP in packs of three for $0.99. I don’t begrudge Zen Studios trying to make a little more money for their work, but this doesn’t feel right in a pinball game. The big selling point of pinball for me is in developing the skills required to succeed at each table, both in terms of solving the table’s story and in reaching the highest possible score. If you can just continue, what’s the point? I don’t know, usually this sort of thing doesn’t bother me in games, and it might not bother you, but it just kind of put my old man hackles up a bit.

That aside, this is a decent table, and a good little palate-cleanser if the conclusion to The Walking Dead Season Two left a bit of a sour taste in your mouth the way it did for me. I think Zen Pinball has a lot of better tables, but among their licensed ones, few of them are as authentic to the material as this one. It’s a difficult table that is still a little forgiving, and should provide a decent challenge to most players. I wish it did a little bit more with its set pieces than just show them off between balls, but I appreciate that a strong attempt was made to incorporate elements of each episode and cover as much play variety as you could reasonably expect. 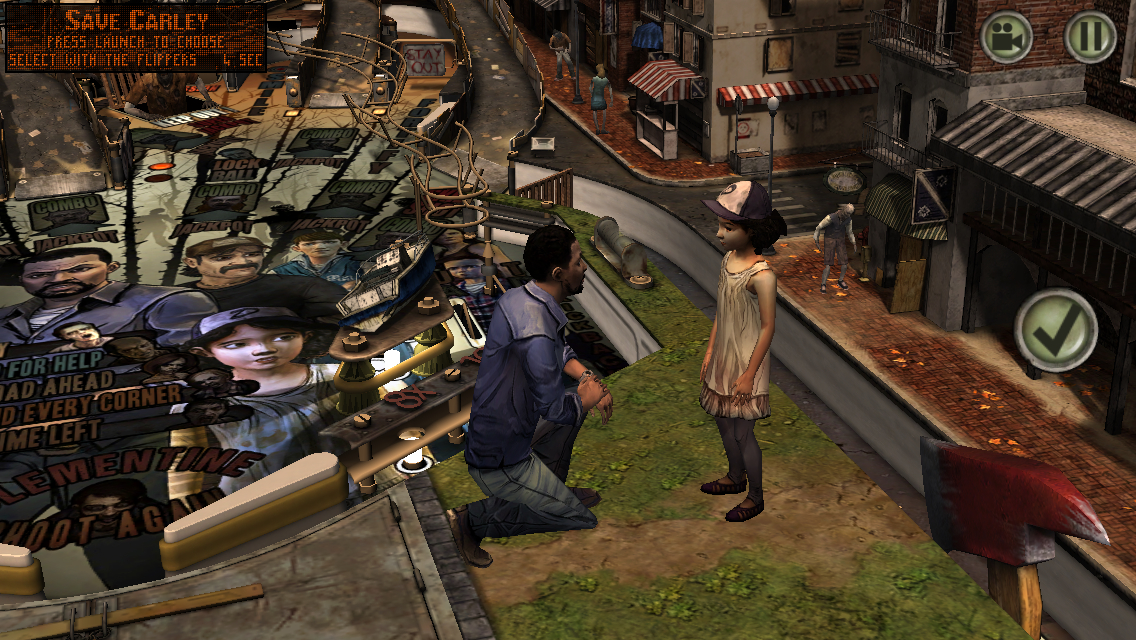 I don’t feel like this is a must-own table, but I also know some people basically chain-smoke new pinball releases, and that crowd is likely to enjoy The Walking Dead Pinball if for no other reason than to fill the gap between releases. For people who made a strong connection to Telltale’s slice of The Walking Dead, it’s nice to have extra things that commemorate it the way this table does. The average player with no connection to the license who only goes for the occasional table can probably find more interesting choices, however, and veteran pinball players are likely to find it just a bit too simple to solve to be truly satisfied. At a price of $1.99 either way you choose to buy, however, it’s a pretty good value for a licensed table with this much care put into it.