I don’t usually find myself speechless after playing an iOS game, but Dodo Master ($0.99) has given me pause. The game is so carefully crafted, and so well planned, and so well tested that I want to be certain that each word I write about it is equally well thought out. My completely uninformed guess is that Samir Selah comes from a long line of watch makers. Every bit and piece of this game fits perfectly together in a well paced harmony. With his debut iOS release he has struck gold, now its just up to us to go pick it up.

Your Dodo finds herself trapped in a dungeon with her eggs scattered about. In order to get out she needs to gather as many eggs as possible and clear each dungeon room. While it is a relatively stale premise, it is helped along by a few nice touches. First off, a female protagonist is an exceedingly rare thing. Much respect for giving a minority in gaming more representation. If you fully clear a dungeon room by gathering all possible eggs, you unlock a hat. This small customization was probably the primary driving force for me to 100% complete as many rooms as possible. The hat selection ranges from odd to goofy to hilarious and is an amazingly effective carrot to chase. On more than one occasion I found that suiciding and starting over to get a missed egg was preferable to finishing a room in an incomplete state. The avian nature of the protagonist gives the game a distinct feel as well. More than once I felt like I was playing a mini-game from the movie UP, and the feel is from more than just the visual. The aerial movement and controls really make you feel like a quasi-flightless bird, if that makes any sense. Its probably just something you need to feel for yourself, but it helped my immersion that our hero moved like the Dodo birds in that movie.

Controls in Dodo Master are satisfyingly tight. Each spike, rat and spider have very well defined hit boxes. When you take damage in this game, its your fault. Traps are even given a small red particle effect to help distinguish from the lavish backgrounds. In addition to being tuned very well, the controls are simple. The only non-X axis actions you can take are jump and ground smash. The double jump has a charm all its own with a subtle audio clue as to how a dodo bird is able to physiologically perform a double jump. Where many platformers fall flat with inprecise or overly complicated controls, Dodo Master flies high.

The visual and audio quality in this game are top notch. Levels feel organic and inviting. Even when things got difficult, I had no problem identifying traps and enemies. The smallest things like the afore mentioned double jump will draw you into the game. Dodo Master uses it’s audio to help you navigate rather than to distract. Traps are given audio that you will probably notice before even seeing the trap. Fire spouts sputter, rolling barrels creak, and swinging spike traps emit the sound of straining ropes. The best way I can describe the overall effect is that you never feel out of place, and you never feel out of control. 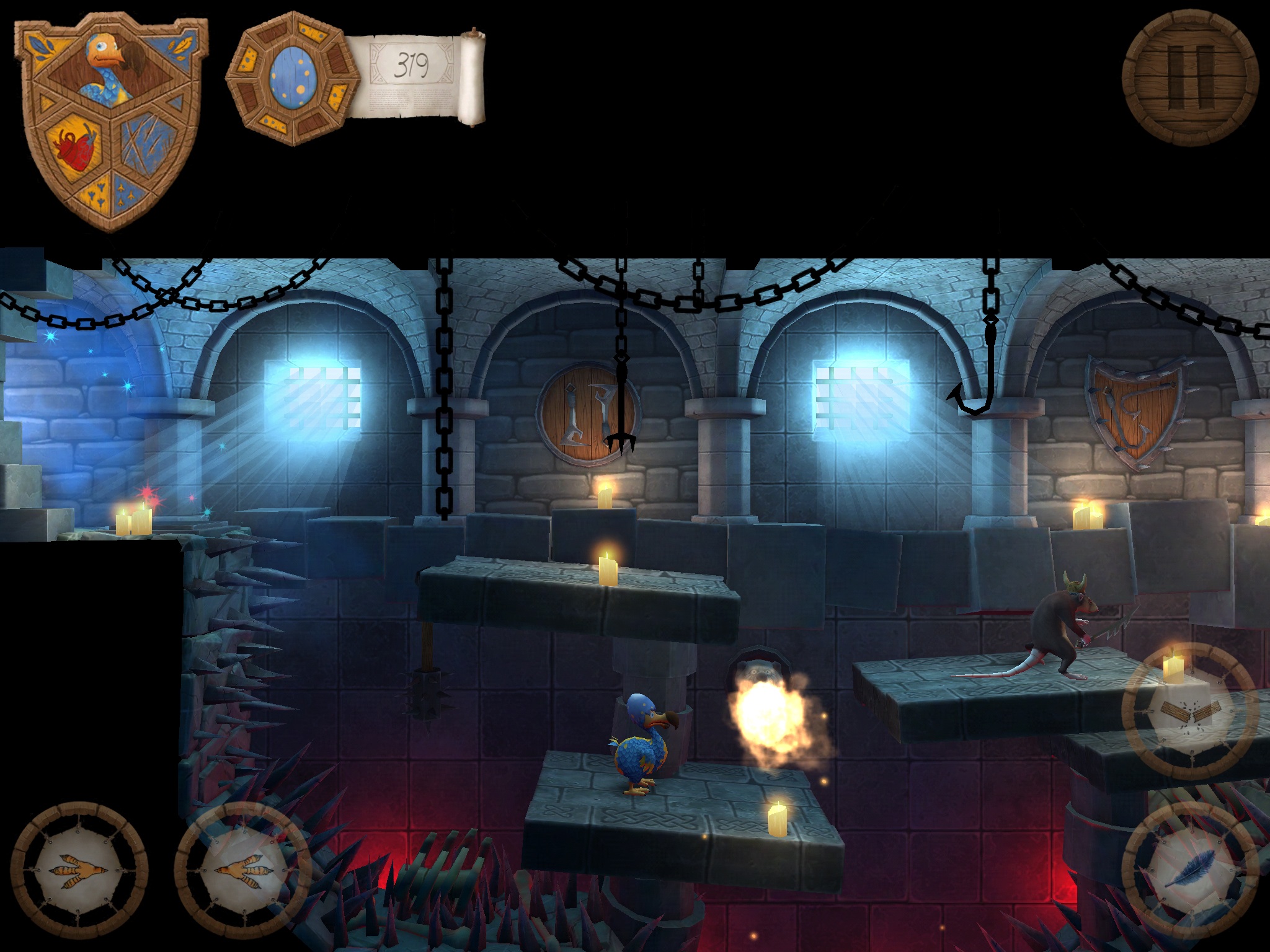 The only gripe I have with this game are that I, as a gamer that has some platforming experience, might be outside the target audience by a little bit. The difficulty usually meant each level could be passed on the first attempt, and the sparcity of secret areas means that I was able to burn through the game pretty quickly. I am willing to accept that this game might be aimed at a wider, more diverse consumer group than just gamers. What I would have liked to see is possibly a new game+ feature with enemy AI rather than just set pathing and maybe a few more levels like the ‘Travel Insurance’ map which consisted of multiple back-to-back obstacles that you couldn’t stop and analyze each before being faced with the next. Admittedly there were a few levels like this that almost caused me to toss my ipad in frustration, but the majority of levels were much slower paced. I would also like to see a per level egg counter to show me if I have gathered all possible eggs before I finish a level. The game’s length could have stood to be a little longer also, but it was still appropriate given the cost of grabbing this game. In all, these are minor quibbles in an otherwise excellent game.

The price point is what finally pushed me to 5 star this review. The game is temporarily free on iphone and $.99 on ipad. With a few touches I could have easily seen this as a $5 or even $10 app. There are no iap. The quality of the game doesn’t match the low pricetag. The only thing separating this game from a $15 app is just total length of content, which could easily be changed with future updates. As it is, Dodo Master is a flawlessly created platformer that screams panache from beginning to end.