If you ever need proof that competition is healthy for the customer, just check out the gamebook scene on mobiles. What started as simple conversions of the text of existing books has spun out into three developers each, in their own way, trying to combine the essence of classic gamebooks with the flexibility that modern technology allows. It started with Tin Man Games essentially giving you the keys to the game via a bunch of extra features, followed by inkle’s brilliant adaptation of Steve Jackson’s Sorcery! ($4.99) and Forge Reply’s original RPG adventure based on the popular Lone Wolf (Free) character. Then, in April, Tin Man released their version of Starship Traveller ($5.99), where for the first time, the developer didn’t simply bring the original book over with some bells and whistles, but elaborated on it. Recently, inkle again upped the ante with their stunning take on Jules Verne’s classic novel, 80 Days ($4.99), and now we’ve got Tin Man replying in kind with what is clearly their most confident conversion yet, Appointment With F.E.A.R. ($5.99).

The original book this is based on, like Starship Traveller, has a special place in my heart. Written by Steve Jackson and released in 1985, Appointment With F.E.A.R. was the 17th book in the Fighting Fantasy series and the first to use a superhero theme. It had quite a few unique systems to separate it from other Fighting Fantasy books, so it was something of an oddball in the greater context of the series. As I got older, I realized that from a design point of view, it had a lot of problems, but I still have a strong sentimental attachment to it due to the topic matter. It’s a great, campy take on American comic book heroes, with equal parts affectionate nose-tweaking to both Marvel and DC. That said, I was a bit worried about how this was going to work out, since it’s not one of the stronger Fighting Fantasy books. As it turns out, I needn’t have worried. 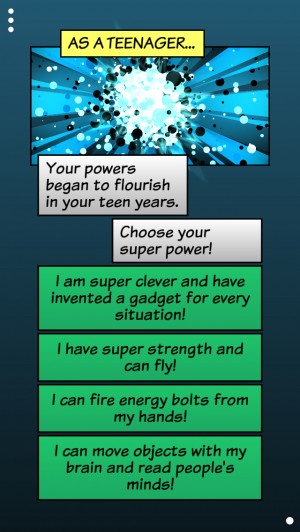 First, the most sensible and obvious change has been made. Instead of adhering to the book format of the original, Appointment rolls out its story in comic book style, with plenty of panels of art, word bubbles, and text boxes. It’s a minor thing on paper, but in practice, it fits the story so much better. It helps that even though everything is technically a still image, there’s a lot of movement to the various elements. You don’t ever actually turn any pages, because the next piece of the story just slides in from off-screen. The battles feel especially exciting, since every attack is punctuated with a 1960s Batman-style sound effect and the damage appearing in big, shiny text. In another way it borrows from that theme, if you’re in your menu and go back to the game, you get a big spinning logo transition. The music has a great, jazzy bombast to it that calls back to things like the 1966 Spider-Man or even The Incredibles. This feels like a living comic book.

The next big change they’ve made is to allow the player a lot of customization in their character. As in the original game, you can choose from different superpower sets, but you also get to choose your gender, appearance, costume colors, and name. The powers affect how you’re able to interact with the game, but the rest is just a wonderful little cosmetic thing they’ve put in to give you an extra feeling of ownership over your character. After all, one of Fighting Fantasy‘s mottos is that YOU are the hero, so you should be able to have some say in these things. You don’t have total control, however. The game will present you with a list of options for you to choose from or reject until you find something you like. For my first playthrough, I played a super-strong flying type guy with a blue and yellow costume named Marshal Thunk. I was pretty happy with him.

No matter which type of character you make, a lot of the things will be the same. You’re still playing some sort of Clark Kent/Peter Parker cross who works for a newspaper and has a doting elderly Aunt Florentine. Your mission is the same, as well: to uncover the where and when of the secret meeting being held by F.E.A.R., a criminal organization led by the evil Titanium Cyborg. You do this by uncovering clues you can find at the scenes of various crimes. Beating bad guys, solving clues, and behaving in a generally heroic fashion will earn you Hero Points, sort of a running score of how awesome you are. There’s quite a rogue’s gallery to work your way through, and you’ll certainly have to play the adventure more than once to meet them all. You have a limited amount of time to find all the clues you need before F.E.A.R. is able to enact their villainous plan, but Tin Man’s usual bookmarking system ensures there’s always more time if you want it. 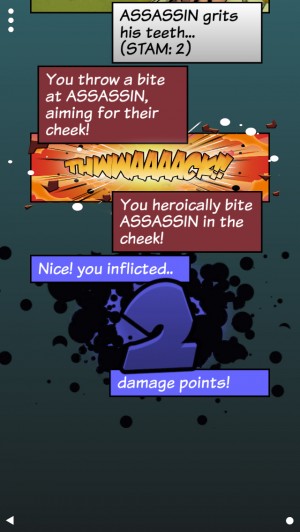 Tin Man have moved a lot of the mechanical bits and bobs off-camera this time around. You won’t ever see a single dice roll, even though they’re happening regularly. In battle, you simply choose from three different (and often humorous) attacks that deal damage in inverse proportion to how likely you are to land them on your foe. The dice are rolled where you can’t see them, and the text conveys whether you succeeded or failed. It tells you how many HP you and your opponent have, as well as how much damage each attack does, but that’s about as far as it opts to burden you with that stuff. A similar tack is taken with skill checks, which happen fairly infrequently in this version. There’s also no inventory to speak of, so you don’t have to worry about having the right items in the right places. Instead, your choices are governed more by which powers you have and which clues you’ve uncovered. Sometimes the game will give you a chance to connect a clue to the present situation, which is a sign that there is a hidden choice that is available to you if you can just put it together.

There’s also been a nice attempt made here to address one of the big weak points of game books, the lack of replay value. Usually, once you solve one of these things, there’s not much reason to go back except to find all of the bad endings for fun. In the past, the developer has implemented achievements as an incentive to come back for another round, and those do return here, but they’ve also introduced a new replay element in the form of collectible cards. When you beat a bad guy or do the right thing in certain situations, you earn a card pack that contains a random scene or character from the game. Some of these cards are very rare, and you can spend the luck points you’ve earned to increase your odds of receiving one. There’s no point to collecting these cards beyond just trying to get them all, but it’s still a nice little reward for playing. Adding them on top of the different power sets, hero customization options, and how many different things you can do in the course of the adventure, you end up with a gamebook that is worth playing through at least a few times.

If you have any love for superhero comics at all, you’re going to have a real blast with Appointment. There are loving references to real comics everywhere, the tone of the story is just right, and the presentation is stylish and energetic. It’s great to see what Tin Man Games can do when they leave the safety net of rigid adherence to the original books, and this was probably one of the better Fighting Fantasy books to test that approach on. This version of Appointment with F.E.A.R. keeps everything good about the original book and adds so much to make it a much better experience. Fans of superheroes or interactive fiction should definitely check this one out. It’s one of the best superhero games in any genre on the entire App Store.