Nearly a year since we’ve last seen or heard from it, Crescent Moon Games’ Almightree: The Last Dreamer ($0.99) made some waves back then with aspirations of being a “Zelda-inspired” 3D puzzle game. As far as actual execution is concerned, there isn’t much here in terms of Zelda-inspiration anymore, but what we’re left yet is an impressive 3D puzzle platformer. In fact, it’s one of the better 3D puzzlers I’ve played this year, and should be on everyone’s list to check out.

In a world literally falling apart, you take the role of the Last Dreamer, and you can put a stop to it. After a dream vision in which the Almightree tasks you in reviving its saplings (which can then prevent the world around the saplings from being destroyed) you’re sent on a race against time to revive the saplings, prevent the world around you from falling, and move ever closer to awakening the world-saving Almightree. Throughout the game you’ll encounter snippets of photos that provide some vague hints into the game world but otherwise, this is the story that’s told. 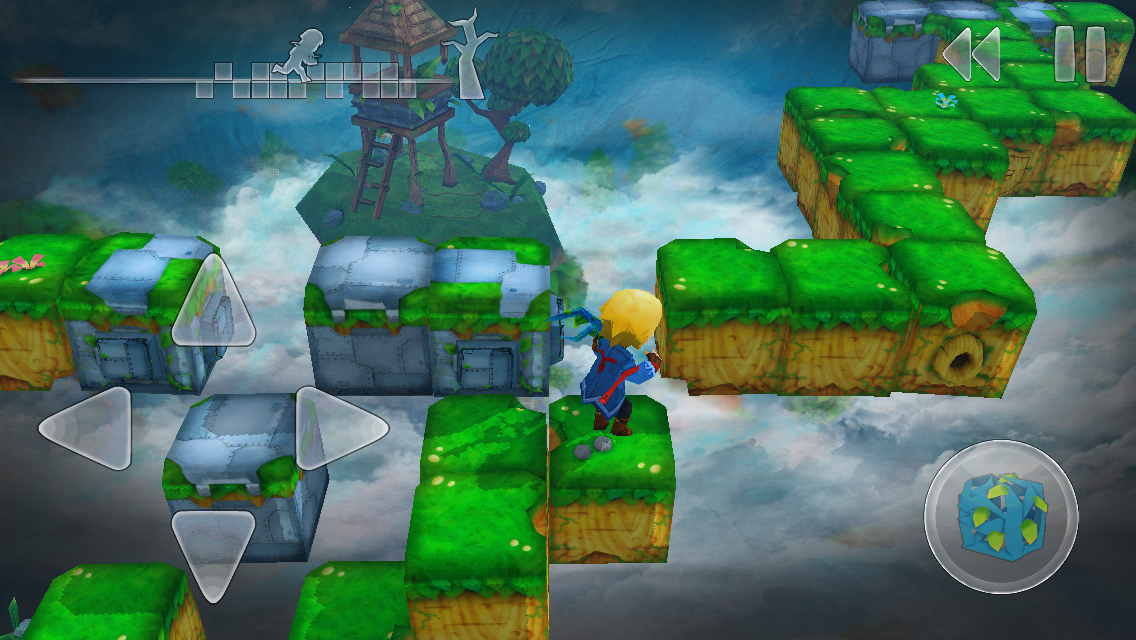 It’s a simple tale but it weaves itself well into the actual gameplay mechanics. As a Dreamer, you have the ability to physically move pieces of the world around. The world is comprised of cubes placed on or near each other, and it’s these cubes that you can shift. After guiding your Dreamer to an empty bit of space, you can tap to create a ‘portal,’ and then move to the actual block you wish to teleport. One more tap and the block in front of you is teleported to the entry portal you set. One of the things I love about Almightree are the options that later maps give you in how to teleport blocks. Sure, each puzzle typically has a fast and “preferred” solution but with enough time different answers can be unlocked.

In addition to block teleporting, Almightree has some basic platforming gameplay that integrates well with the puzzle mechanics. Your dreamer moves in a 3D plane and can jump exactly one block high (or below). Thus, the majority of the game revolves around you teleporting blocks and creating bridges, stairs, and paths around obstacles as you move towards the Almightree sapling at the end of each map. It’s not a hard concept to grasp, which I consider to be a great strength in initial approachability. 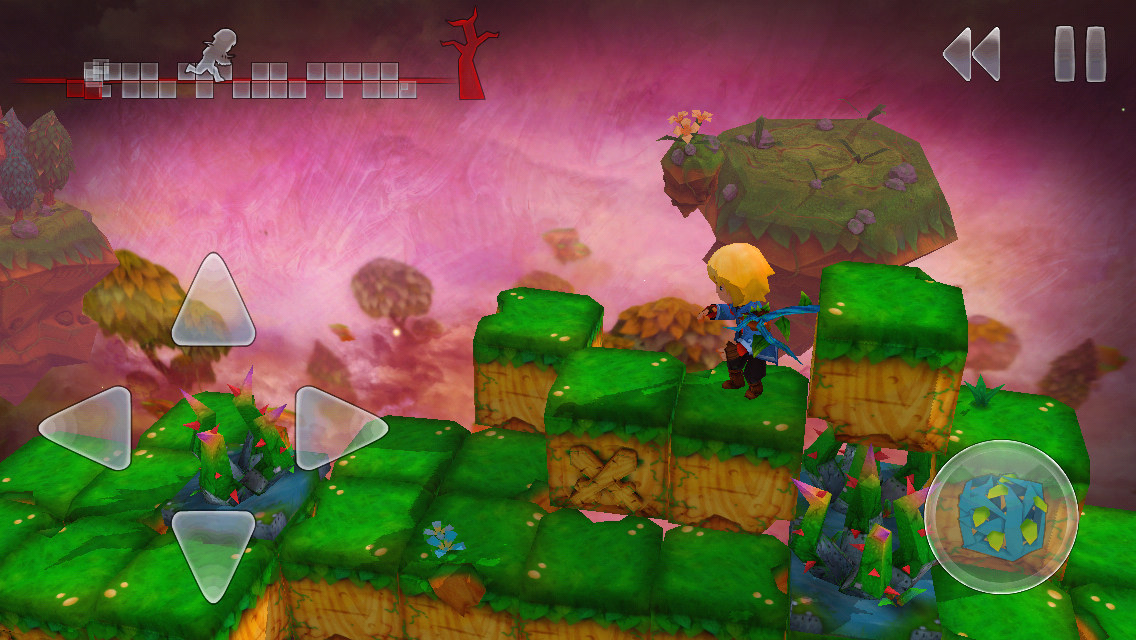 Sounds simple, but there’s a few additional rules to take into consideration. First, your Dreamer can’t move or jump onto a portal until a block is actually teleported to that location. Also, it’s relatively easy to accidentally create situations where you lock yourself into a location by teleporting key blocks into locations where you can’t really access them. Thankfully, the game also includes a ‘Rewind’ button that lets you re-do moves that put you in that predicament. Finally, tying in the narrative of a world falling apart, each map is on a timer that causes parts of the map to slowly fall out of existence. Get caught in one of those areas and the game is over. So, you’ll be creating paths and moving along all while doing it fast enough to beat out the falling world.

While the fundamental idea of swapping blocks doesn’t really change (a good thing, in my view), Almightree does an excellent job of slowly building up puzzle mechanics and nuances that make each subsequent map more interesting. Early maps focus entirely on teaching simple block swapping techniques while later maps start adding actual obstacles that prevent or alter the basic swap techniques that are taught. For example, early on you start encountering steel blocks that can’ the transported and then thorn blocks that can’t be jumped over (but you can build bridges over them) but can be neutralized if you swap in a garlic block near it. 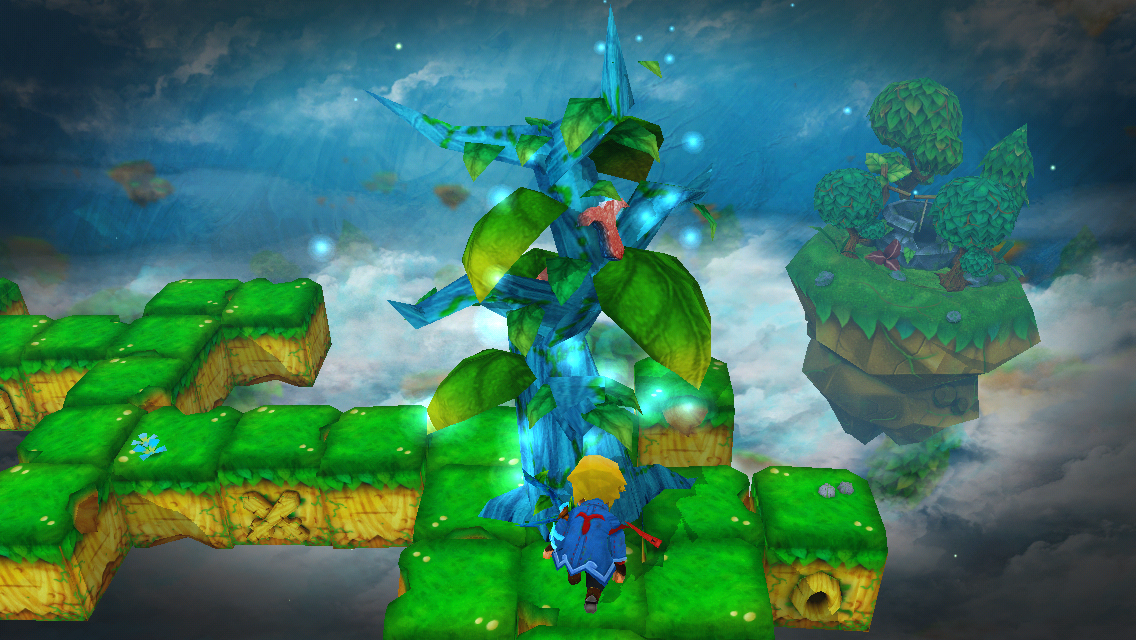 What makes Almightree so entertaining is the excellent combination of puzzle mechanics and a challenging, but fair timer mechanic. The puzzles along can be hard enough, but when you combine the fact that each map is a race against time there ends up being a certain amount of tension that makes the game even more enjoyable. While puzzles with timers have the tendency to become frustrating, levels can easily be thought of as segmented and can eventually be memorized and overcome. Most later maps require plenty of replays but there’s an awesome sense of accomplishment each time you completely pass a map.

Almightree also nails a lot of the other supplemental elements, like great music, beautiful visuals, and a touch-control scheme that works well enough for the basic platforming skills required. However, those extra benefits are simply icing on the cake of a great puzzle platformer. Almightree strikes a great balance in providing challenge and approachability and comes easily recommended.