I always love to see a game that doesn’t take itself too seriously. If it also happens to be genuinely funny at times, that’s even better. Ace Ferrara And The Dino Menace ($2.99) packs in enough self-awareness, charm, and humor, it’s easy to forgive some of the failings in its gameplay. It’s a space shooter that feels a lot like a Saturday morning cartoon, with a colorful cast of characters, a goofy plot to take over Earth, and plenty of action. The gameplay also feels like it’s tuned for a younger crowd, with short, easy to clear missions and very simple controls. Veteran starfighters looking for their next battle probably won’t be satisified, at the very least. As a fun little popcorn experience, however, Ace Ferrara has a lot going for it.

In the game, you take the role of fresh recruit Ace Ferrara, who has just been brought in as an intern with the famous Proton Riders, an elite force of galactic defenders. The game takes place over 23 missions, and between each one you can choose to watch a little story scene that fills in the details of Ace’s developing relationships with his new colleagues. Upon choosing to head out on your mission, you’ll watch a mission briefing that gives you a summary of what you need to. After that, you’ll be in the cockpit of your spaceship and ready to fight off the dinosaur threat. Oh right, the dinosaurs. Well, they were banished from Earth long ago but have recently decided they want to make a comeback. The latest invasion Ace will have to fight against is led by the loveably evil Prince Desastor and his sister. 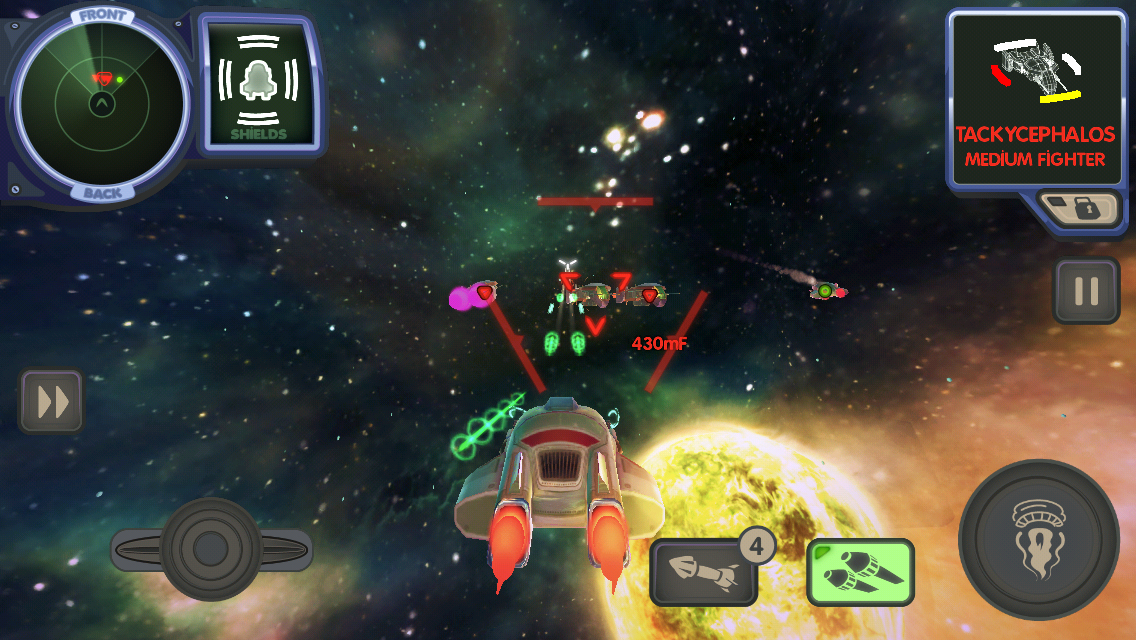 You’ll fly a handful of different ships during the game, though the game assigns them to you for each mission, so you can’t choose freely. Regardless of the ship you’re in, the game plays basically the same. The left side of the screen has a slider for moving left and right and the right side has buttons for boosting, turning your lasers on or off, and firing missiles. You can swipe up or down to accelerate and slow down, and you can swipe left or right to do a barrel roll. Each of the ships offers different weapon arrays, speeds, and shields, and the final ship even allows you to boost infinitely instead of in short bursts. It’s very easy to play, and with the game allowing you barrel roll infinitely, you can actually circle strafe slower enemies.

You’ll rarely need such advanced tricks, if at all, however. Ace Ferrara is a really easy game on normal difficulty, and hard difficulty isn’t going to make you sweat much. While there aren’t any checkpoints, no stage takes much longer than a few minutes, and they always play out the same way, so even if you do have trouble, it’s not hard to brute force your way through fairly quickly. The hairiest mission is one where you need to protect a heavily damaged teammate against a few waves of enemies, and it’s not hard because of the threat to you, but because your teammate can’t take much abuse before you fail the mission. I feel like the game could benefit greatly from an optional higher difficulty setting than the existing hard mode, which feels more like a normal mode. I like that there’s an easier option for people who just want to enjoy the story, but it probably shouldn’t be the default difficulty. 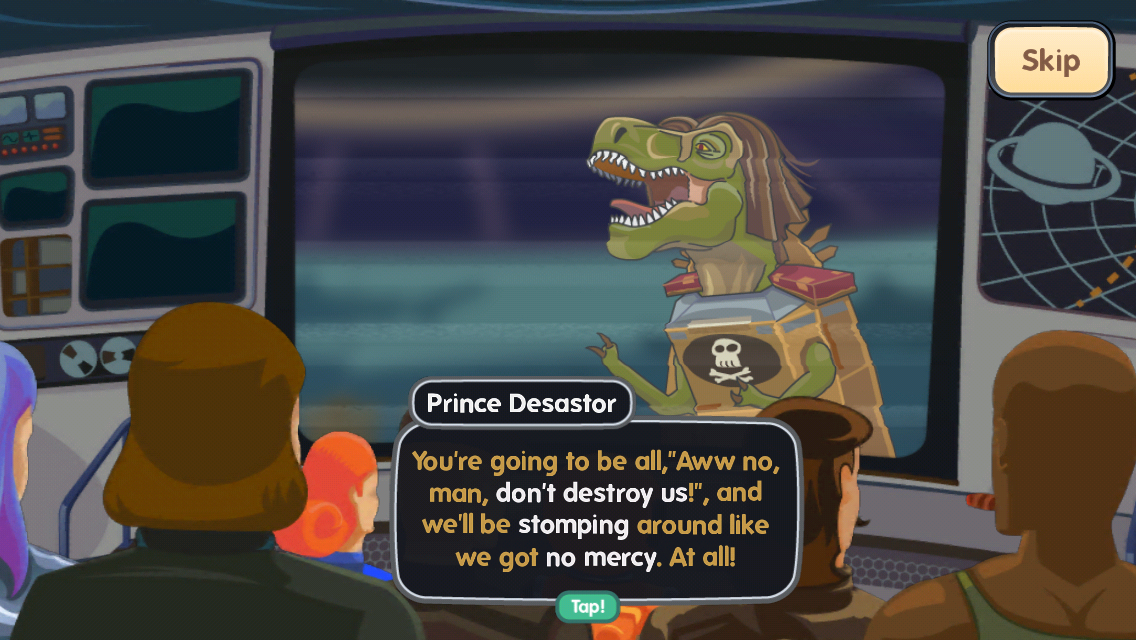 The game has a pretty nice presentation, with a clean, professional art style, decent ship design, and a smooth framerate. The music could use a bit more variety, and the main tune that you hear during most missions kind of grates over time. There’s Game Center support for achievements, and they’re a pretty good set, with a nice mix of progression-based ones and some that require a special approach to certain missions. The game unfortunately doesn’t seem to include a level select, so if you want to knock out all of these achievements or simply relive an earlier stage, you’ll have to start over again. It’s not a terribly long game, running a couple of hours and change at best, but it would still be nice to be able to just pop into whichever mission you want.

While the gameplay might leave you a little bit wanting, it’s at least fast-paced and competent. There are better options on iOS for space shooting action, though, so what Ace Ferrara really has to offer is its charming cast of weird characters. Ace is a bit of a fanboy for the Proton Riders, picks up an unwanted crush from the sister of the highly critical top pilot of the group, and has to prove himself worthy of respect from a lot that aren’t all that eager to give it. Prince Desastor is one of those villains whose prideful bark is far worse than his bite, with his sister having to do most of the evil legwork. Your squadmates are a crazy bunch, including a little girl who flies her own ship and sometimes hands over the stick to her dog, a robot who has a birthday party for each of his parts, and more. The brief story scenes between levels do a great job of fleshing out these strange characters, and it’s a nice touch making those scenes totally optional so as not to bother people who are just replaying. 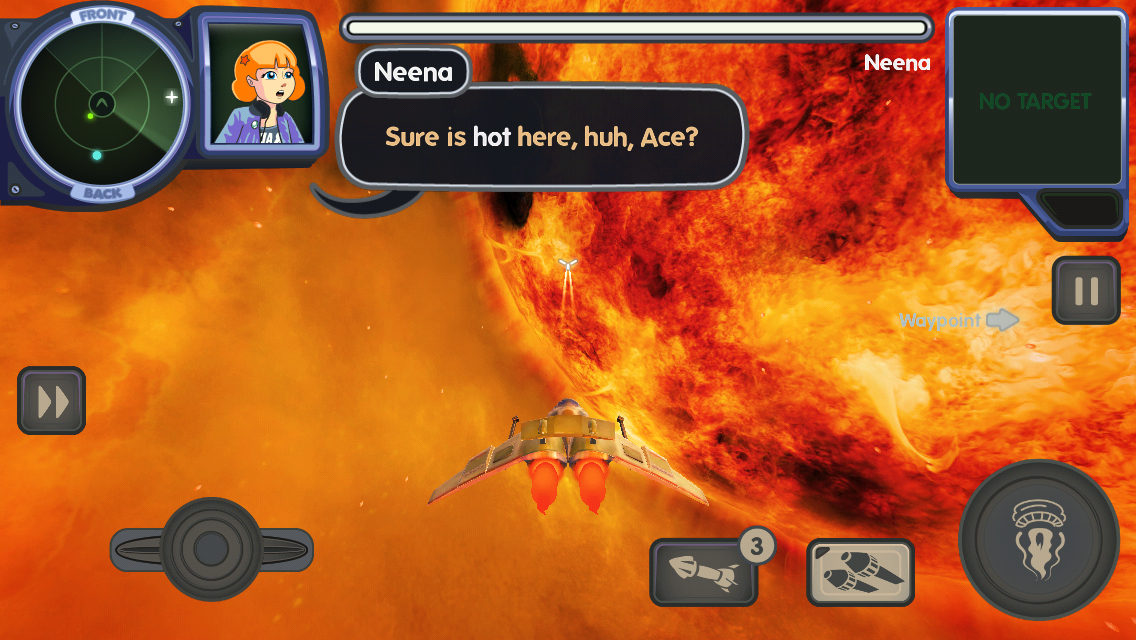 Besides playing it through on the other difficulty level and chasing down all of the achievements, there’s not much else to do in Ace Ferrara once you’ve seen the story through. Even taking that into account along with the relatively simple gameplay, I still found myself enjoying the game quite a lot. It doesn’t drop the ball very badly in any particular area, and it’s just so personable that it’s hard not to warm up to its world. If you come into this for the spaceship battles you’re probably going to walk away a bit disappointed, but just taking it as a piece of entertainment, Ace Ferrara is a lazy day and a few bucks well-spent.