Nitrome’s 8bit Doves ($2.99) is a game that will try the patience of players. It has challenging physics to contend with, but is also structured in a way that really impedes the replay value of this challenging action game. The goal is to control a flying hero through dreamscape levels, turning clockwise and counterclockwise to control him through the skies, contending with trying not to crash into the walls or other occasional moving hazards. As well, doves fill the levels: collecting these is an objective tracked by the game, but not inherently necessary to completion. Flying in the general vicinity of the doves is all that’s necessary to collect them, a fine concession from a game that is difficult to control.

And yes, there is a learning curve to controlling the hero, as his turning radius is very wide. This isn’t a complaint at all, as it’s a clear part of the game – it’s just not a very easy game to play. It’s not impossible; any challenge can definitely be conquered with perseverance, and the game restarts very quickly upon death. It just does get a bit frustrating because it often feels like it’s necessary to turn very early. The turning is also a bit odd in that there’s gravity when not turning only, making flying upward a real challenge. It all just requires practice and patience. 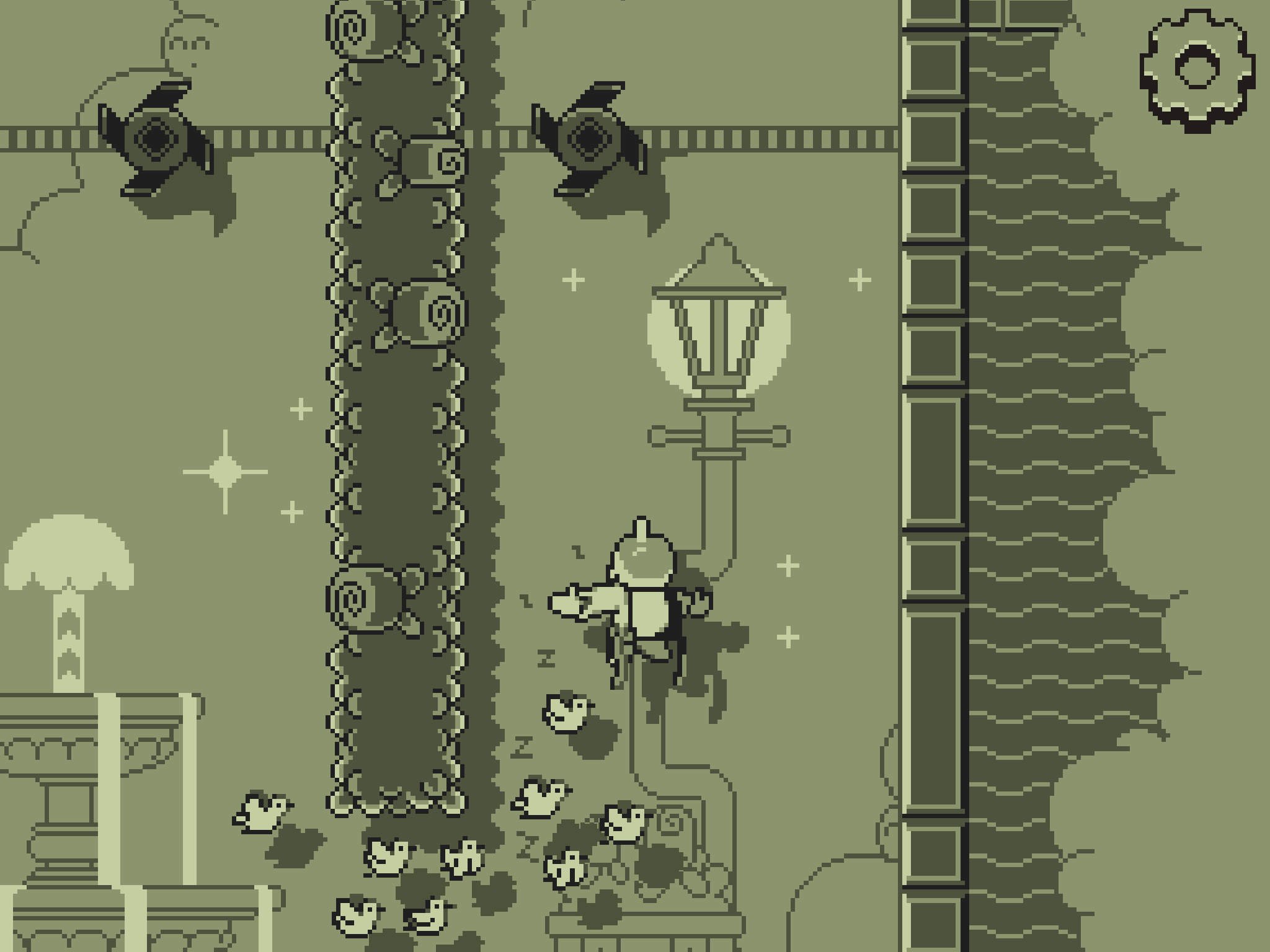 8bit Doves is visually inspired by the original Game Boy, using a 4-color scheme throughout, which has nice and chunky pixels. This sort of visual style has been popping up recently, with games like Two Brothers on PC, Super Scrapped Robot (Free) on iOS, and the occasional GBJam centered around grayscale games making the rounds recently. I dig it, in part because I love pixel art games, the style does remind me of my Game Boy Pocket days, and I think it forces artists to try and make something that’s visually appealing within the restrictions. And really, 8bit Doves is a good-looking game: the backgrounds are detailed, the animations are fluid, there’s a clever shadow effect on the hero, it’s all candy for those who dig this sort of style. 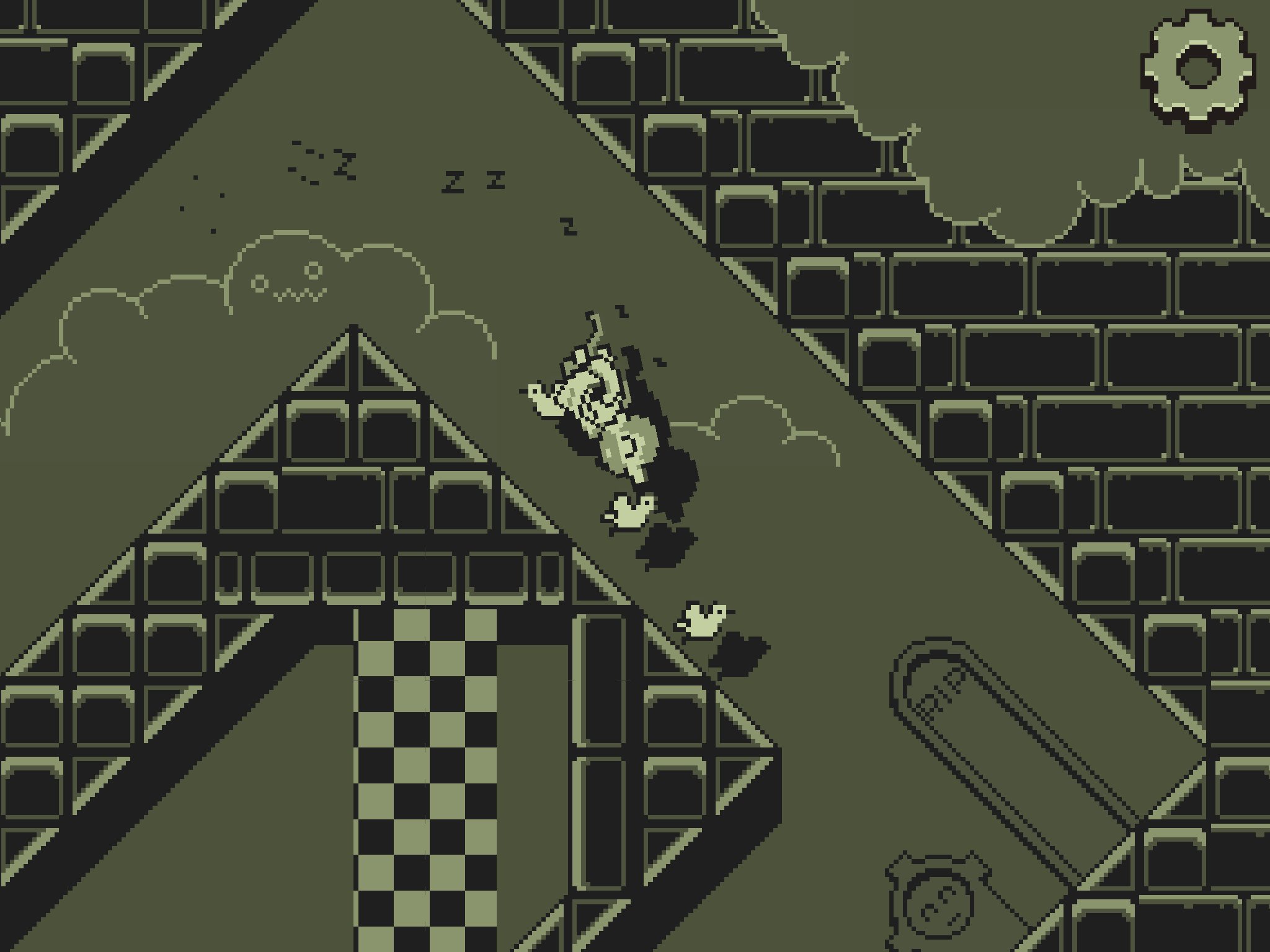 The problem with 8bit Doves though, is that the game is explicitly designed not to be replayable. There are the three sets of ten levels each, but they must all be played in sequence, not in any individual order. Why this is not a choice is befuddling, because the game does track the number of doves collected in each set of levels. Going after the doves, which requires a great amount of precision and timing in many cases, is extremely challenging – being able to play single levels would help make this quest easier. But trying to get them all in order? It’s an extremely unappealing endeavor to start off with. And knowing that one screwup requires starting all over from the beginning? I don’t understand this choice at all. It’s a killer for any replay value the game could potentially have. And the 30 levels can be beaten in about an hour and a half or so of play. More levels would be great – enabling easy replayability of the existing levels would be even better.

I appreciate a lot about 8bit Doves: I just know it needs a lot more to be the best game it can be.